Alexander Zverev is through to the Nitto ATP Finals after victory on Saturday over six-time former champion Roger Federer.

The result sees Roger bow out at the semi-final stage for the second year in succession and he ends his season with a 48:10 Win-Loss record and 4 titles; the Australian Open, Rotterdam, Stuttgart, and Basel. Not bad! 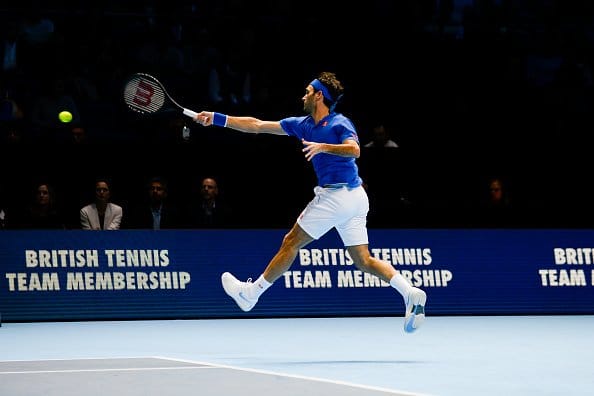 Federer won the toss and elected to receive finding himself up 15-30 after a Zverev double the fault but the German reeled off three points in a row to hold for 1-0.

A hold to 30 saw Roger level and the pair then exchanged more comfortable holds but it was Zverev looking the stronger of the two from the baseline.

In game six Roger began to throw in the drop shot and a fun game with some fast net reactions saw him hold for 3-3.

The Swiss then had 15-30 on the return but a weak return saw the window of opportunity go begging and Zverev held for 4-3.

The number three seed soon found himself up 6-5, having lost just 7 points on serve in the set and he played a strong return game to snatch it, connecting sweetly on every return to break to love and take it 7-5.

Into set two and the pair exchanged love holds for 1-1. Roger then fashioned his first break points of the match at 0-40. Zverev saved two of them, the first by winning a 24 shot rally but the Swiss broke for 2-1.

Could Fed consolidate? Nope, he dropped serve to fifteen and made just one first serve. Zverev held his next game to love to lead 3-2.

In game eight Roger found himself down 0-30 after a timid approach shot but managed to sneak out the game for 4-4. Four simple holds later and it was tie-break time.

The first point saw Fed miss a very makeable passing shot. He should have ripped the forehand winner originally, but Zverev blocked the volley back and Roger dumped a makeable backhand into the net.

Fortunately, that didn't rattle him and he settled nicely on the serve moving up 4-3. Then came the contentious part of the match, with Zverev serving at 3-4 he stopped mid-rally when a ball boy behind Roger dropped a ball that rolled onto the court.

That resulted in the point being replayed which Zverev won with an ace. Strictly speaking, the Umpire is the one who's supposed to stop play, so Zverev took a risk in stopping play however the ball boy admitted his mistake and Umpire rolled with that.

Zverev won his next service point too and at 4-5, Roger missed a routine volley to give Zverev match points.  It was poor execution as Roger tried to cushion the volley but it was spinning downwards with very little pace so it died off the strings.

Roger saved the first on his own serve but Zverev sealed it behind his own to take it 7-5 in the second. 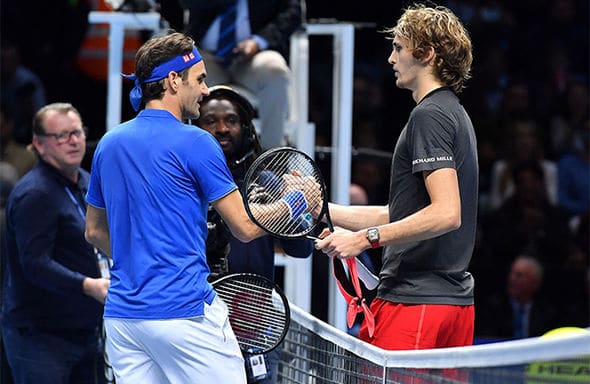 I didn't think I was hitting my spots very well for the majority of the match, it came more towards the end which helped me make it competitive and close. I think I could have done better at returning Sascha's first serves in spells.

Having the break and giving it back was annoying. Reminded me a bit of the Nishikori situation. I feel like I can play better but you know, it's one of those indoor matches where margins are slim, opportunities are rare, a point here or there. Maybe I didn't push enough or have enough to make the difference, I was chasing the score all the time.

A disappointing end to the World Tour Finals and an ineffectual performance from Federer. It wasn't a terrible display by any means as the sets were close but Roger didn't really put the odds in his favour with how he was playing.

It was all quite passive and you never felt like he had the confidence to just go for it on an important point. The 4-4 point in the tie-break summing it up as he just kept the ball in play. Yes, he was probing with the slice but there wasn't much conviction to his shots when the situation was crying out for him to push forward and take the initiative.

Going in I expected a similar tactical display to the one against Anderson by using his short slice and taking it early but he played quite tamely allowing Zverev to be the aggressor and that's why the German came out on top.

The positives were that he moved well and was solid at the net, barring the piss poor miss in the tie-break where he tried to cushion volley a ball that was always going to die off the strings. The negatives would be the first serve which is not landing with enough regularity and the forehand which doesn't look like a weapon anymore.

We're used to line finding frozen rope and liquid whip forehands and him skipping around backhands to fire off inside out winners but they haven't been seen in a long while. Instead, it's a loopy, muscled in ball that isn't getting him on top in points from the baseline. Is the hand still an issue or is it just a psychological thing from the compromises he had to make on it during the summer? Who knows.

As for the ‘controversy' with the ball kid dropping the ball, I don't think there is much to say about it. Fed was certainly on top in the rally so does he win that point and snatch the breaker just as he was starting to play a bit better? Maybe but I don't think you can say with any real confidence he was the better player over the two sets so what can you do other than say unlucky.

Anyway, that concludes the season. I'll likely do a recap post in December but here is Fed's take 🙂

Sampras said once upon a time if you win a slam, it's a good season. I had a great start. The second half could have been better. I lost a couple of close matches that could have turned things around for me, like Paris or Wimbledon, but I'm happy, I was close, and there are many positives.

I'm excited about the new year. Looking forward to vacation and eager to see what wer'e going to work on exactly. What the decision will be for the clay, we'll make a decision on that in the next few weeks and come up with a good schedule that suits my family.