This story is about my experience at the VanOpen. My first non-Fed story. I have been so fortunate to see the maestro play in Indian Wells many times, the USO last year and Seattle for the Match for Africa.

Busy draining my bank account with expensive tickets, travel, etc. I also make a pilgrimage to the Odlum Brown VanOpen every August.

It is a beautiful setting in West Vancouver overlooking the city. From the road, it's a steep hill down towards the Hollyburn Country Club. Parking at the top with a nice walk down through the trees, past the many practice courts, the clubhouse, the parking lot full of expensive vehicles and finally to the tournament.

The club has hard, grass and clay courts. Twenty-five in all. All white must be worn by the members on court. There is one main court and several others for the event. 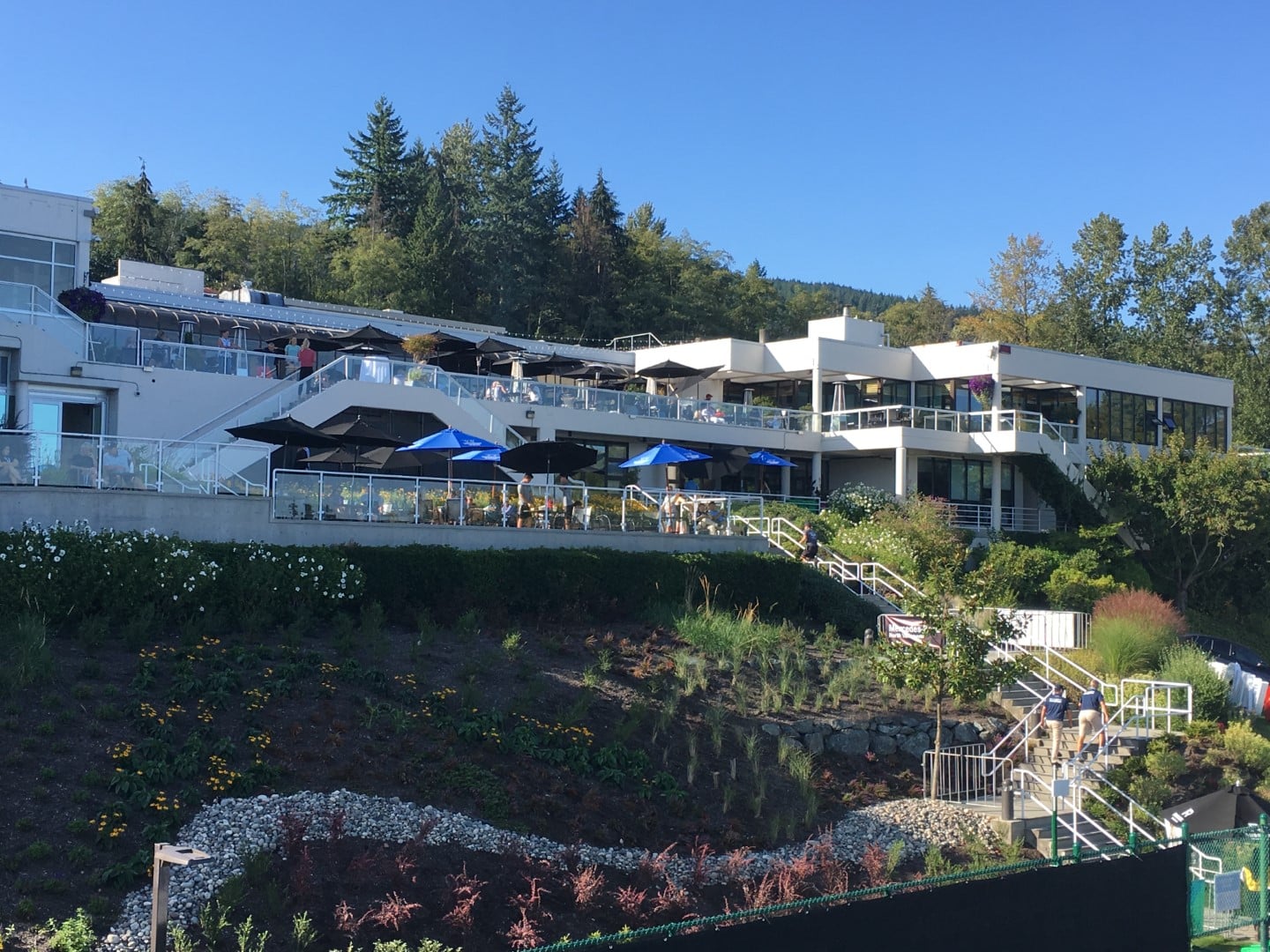 Let's take a look at pricing. A weekly pass is only $240 CAD. I went for a day and paid $40. Compare that to the US Open ticket prices that we attended last year. For a day and evening session, first round, was $600 CAD for 2nd tier seats!

The players at the VanOpen are quite often the ones you can see at a Slam tournament. Oh, I'm not in any way saying a challenger event is the same calibre BUT you can watch some fine competition at a fraction of the price. And be within metres of the players. 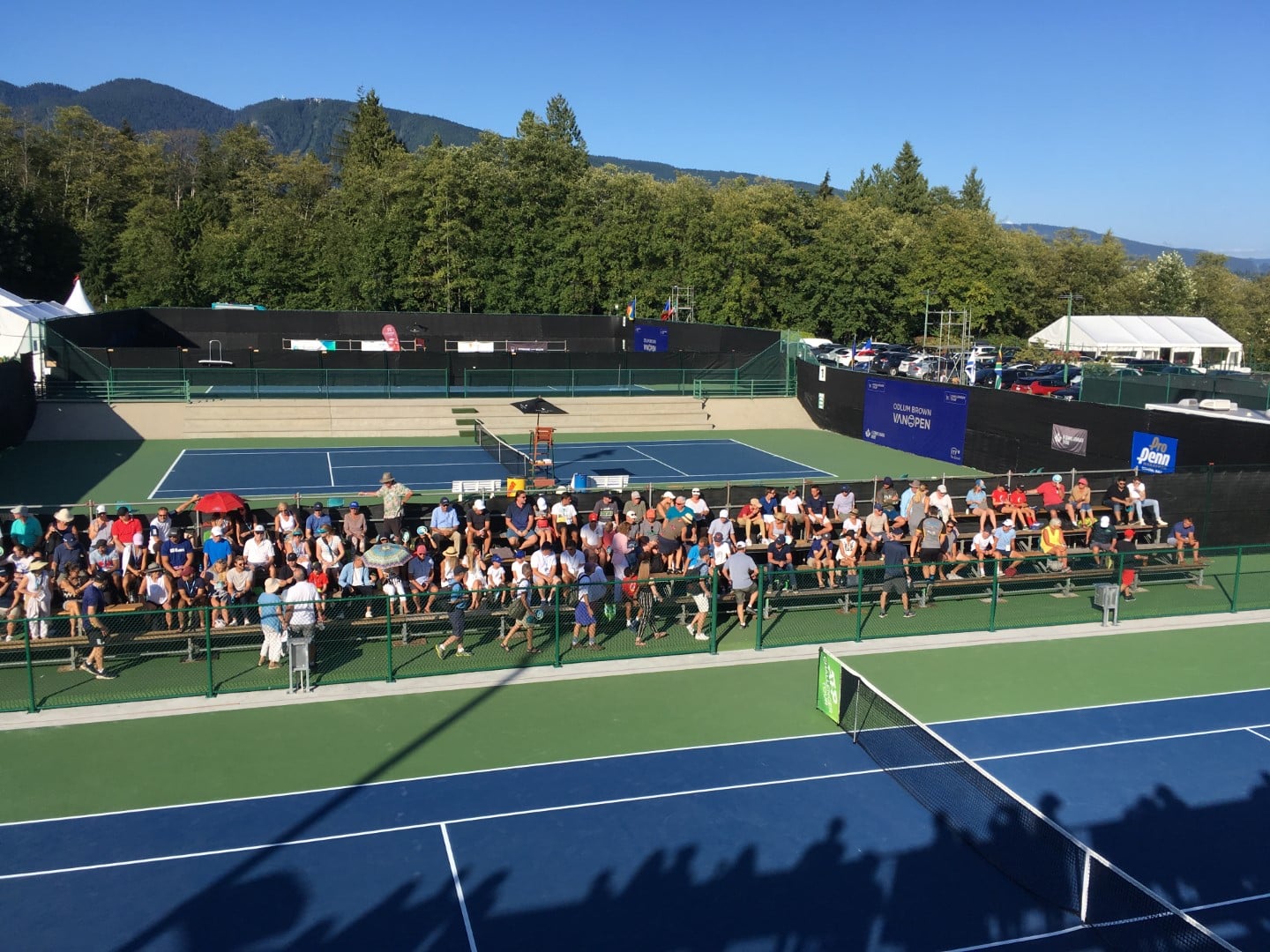 Back to the tournament. As we walked down the hill towards the clubhouse, Hyeon Chung was walking two steps ahead of us. Of course, a photo was in order. 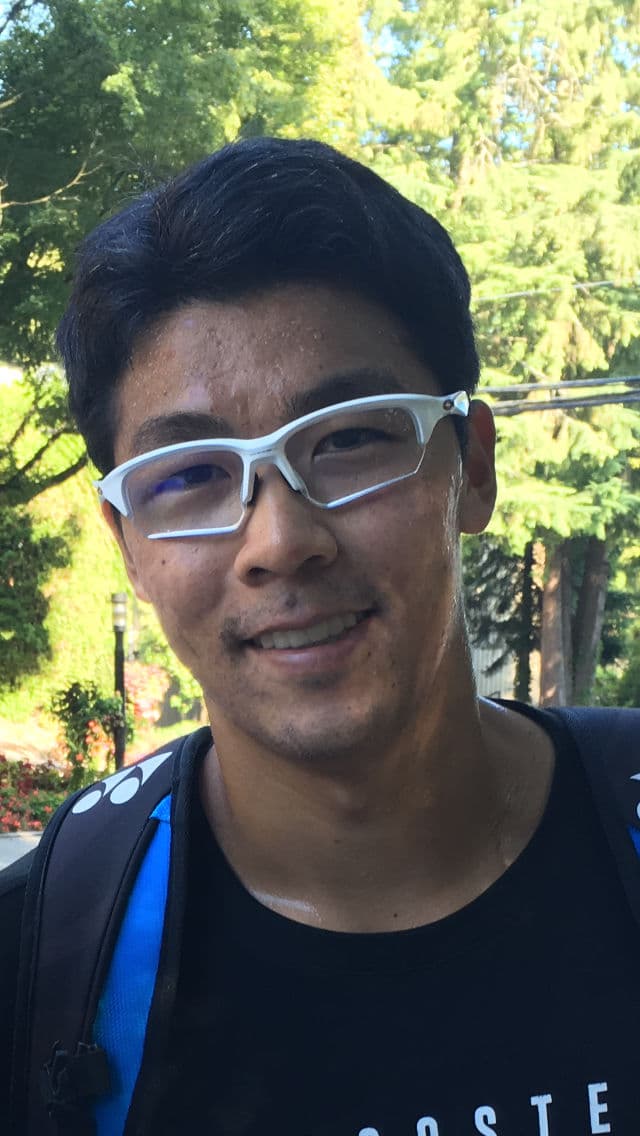 Down to centre court. The best seats are at the top of the stands. There one can watch two matches at the same time as the Polygon court is right behind. We didn't arrive until late afternoon (earlier watching Fed lose to Rublev).

We started with a WTA match, a Canadian teenager, Fernandez, who managed to make it to the semis. Behind us was Liam Broady over Malek Jaziri.

After that was Kokkinakis beating Koepfer. Now that's where the guy is…like so many! 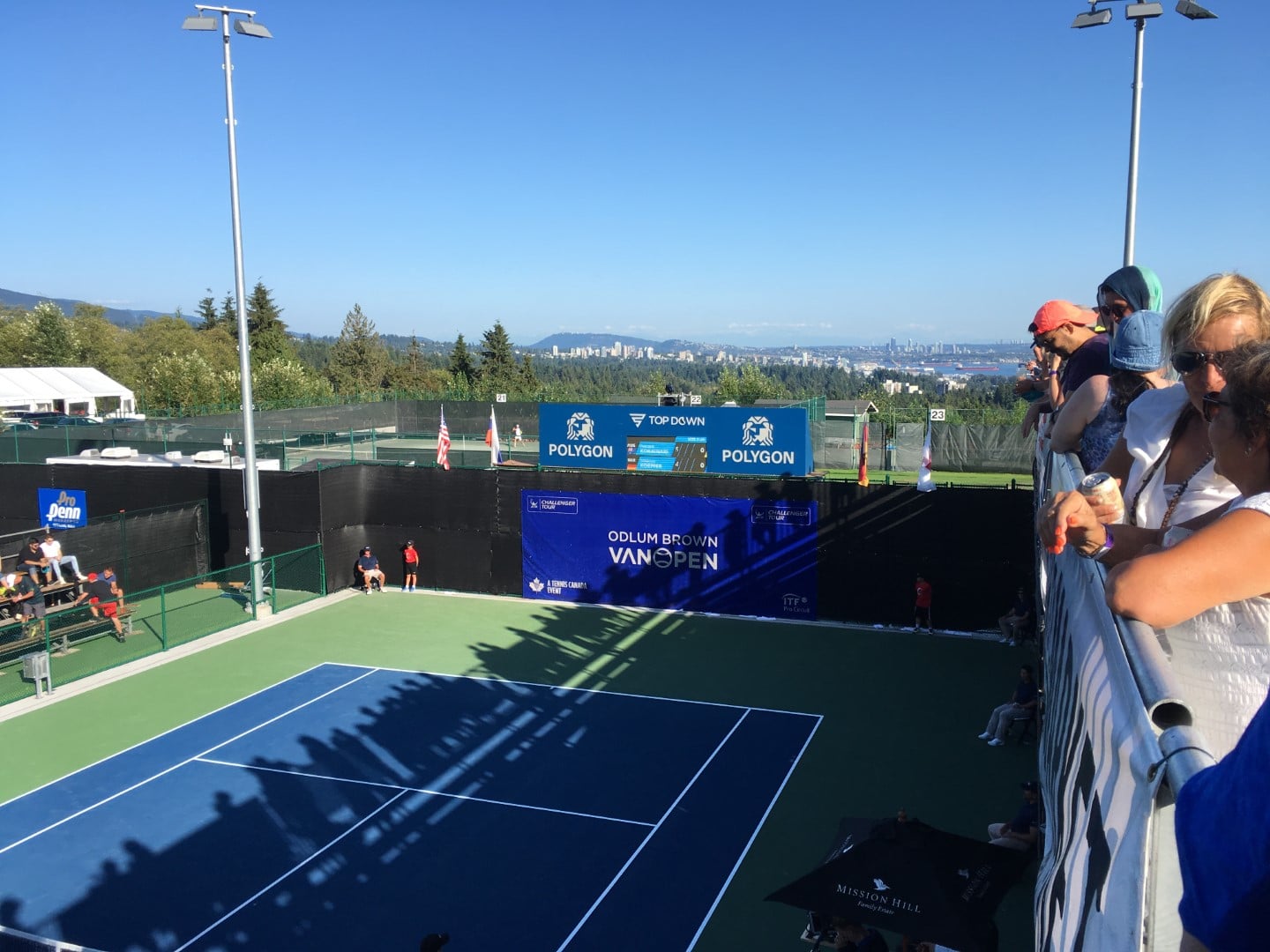 The main match of the evening was Maxime Janvier over Hyeon Chung in two sets. I was impressed with the Frenchman's game. He took Chung's time away with the ball landing at Chung's feet many times. Surprisingly, Chung didn't try any new tactics. The match was over in no time. 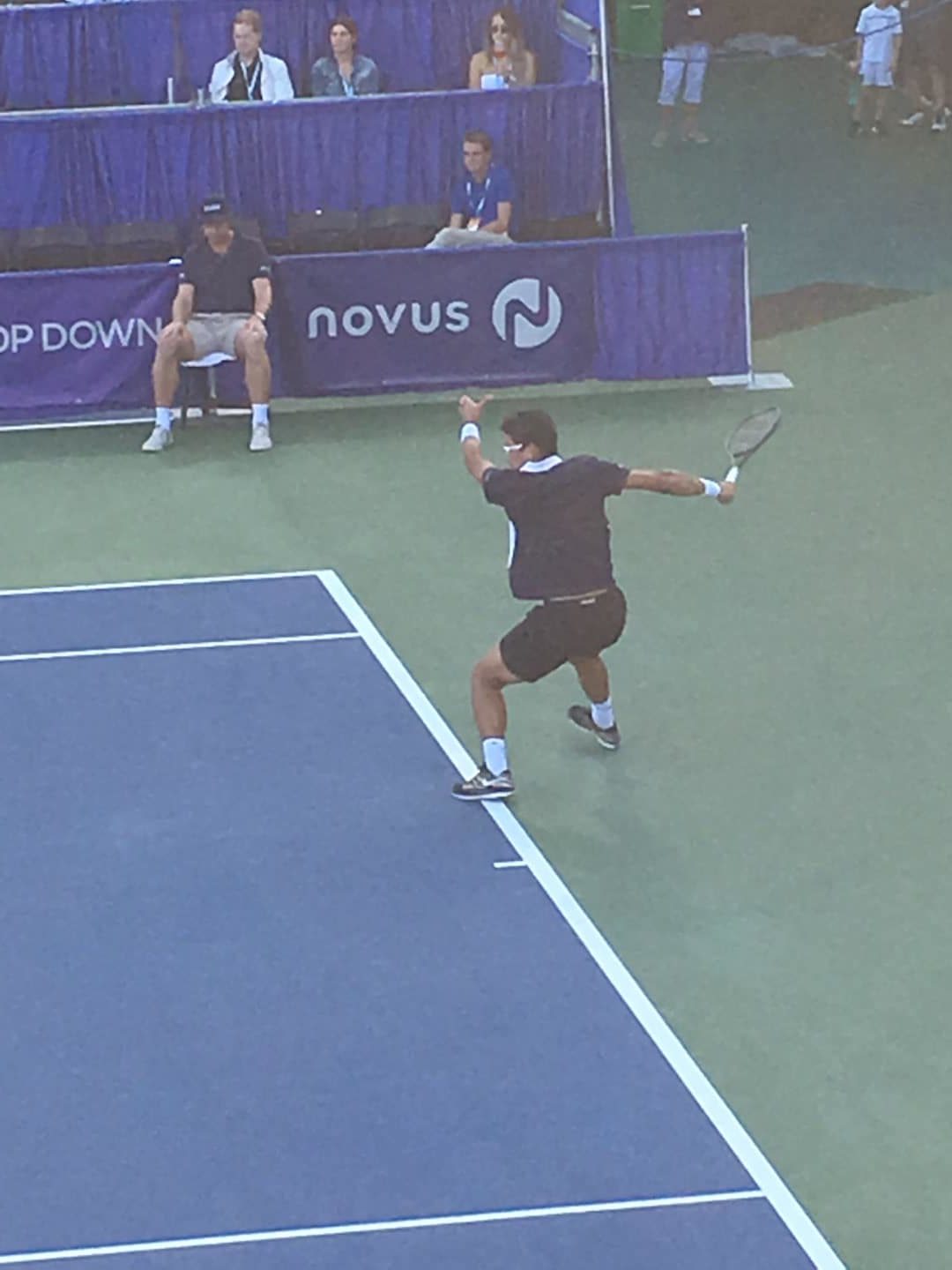 Behind us was now was a woman's doubles match. The Japanese pair Hbino and Kato vs Canadians Fung and Vagramov. The Japanese won the tournament on Saturday. The last match of the day included Lindstedt and O'Mara over two Canadians, Baadi and Draxl.

All in all, great weather, picnic dinner (no hot dogs and Gatorade a la US Open), up close and personal to the players. A lovely sunset on the drive home! 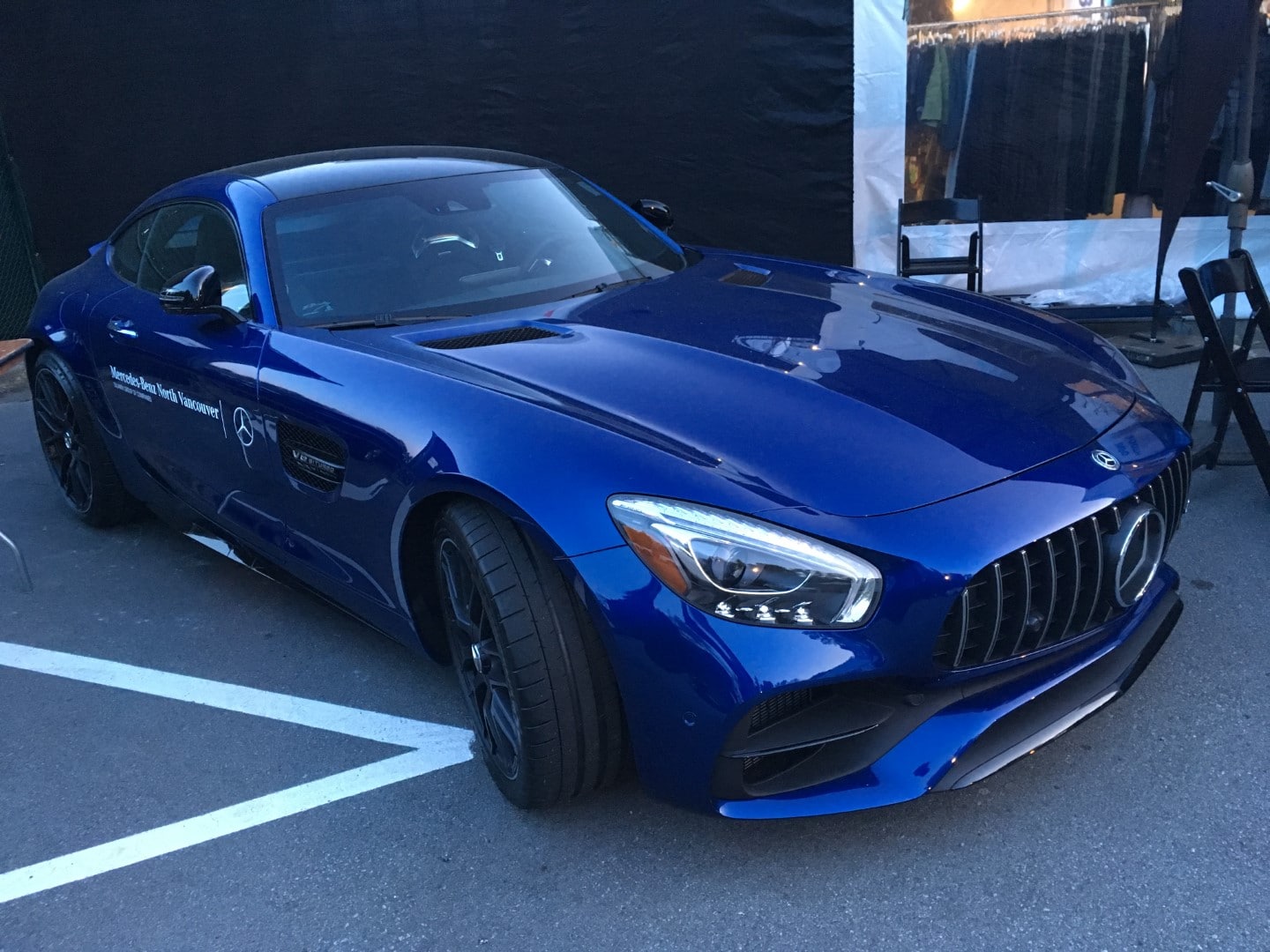 Looking at the draw, it brings home the fact that the margins are so incredibly small between making a run at a major tournament and living on the Challenger Tour the rest of your days.

Check out the Challenger Tour events in your area. Sure, you won't see Mr Federer play, but some great competition at a fraction of the price.

I'll be back next year for another great day of tennis!

Why Roger Federer is Great

Impressions of My Trip To Roland Garros 2019