The US Open draw is out and the most predictable news is that Roger could potentially meet Rafael Nadal in the Quarter Finals which would be their first ever meeting at Flushing Meadows.

The biggest shock is seeing the Number #7 seeding next to Roger's name as he hasn't been outside the top 4 at a slam for over a decade but after the season so far it's to be expected.

However even though Roger has slipped down the rankings the draw has been pretty kind to him here and I can see no real obstacles prior to the Quarter Final.

Of course I said the same at Wimbledon where a Fedal Quarter Final loomed large but both guys lost early and there's nothing to suggest the same won't happen here; it only takes one player to catch fire and suddenly you're faced with a dangerous opponent.

Arthur Ashe isn't the quickest court out there these days but it still plays relatively fast allowing a big server or powerful baseliner to do some damage as we've seen with Berdych and Del Potro in years previous.

Key Facts about the Draw: 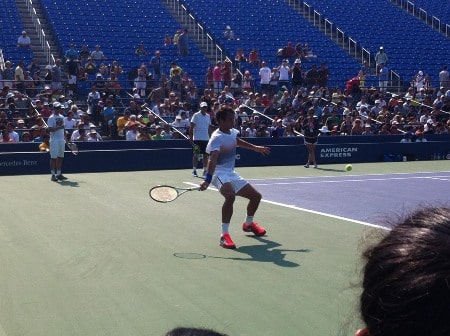 A Look at the Draw

I got bored of overthinking draws long ago as they never plan out as expected, whenever Nadal lands in the same half or quarter fans tend to panic and fear the worst but it is what it is. Could it be fixed? Probably, money is at stake and that often causes strange things to happen but we just have to take it on the chin.

It's about time these two played at Flushing Meadows anyhow and I'll be excited should the matchup happen. Theoretically it should be Roger's best chance at beating Nadal in a slam but of course both recent and long term history say otherwise as Nadal is on a stupidly hot streak and has won 8 of the last 9 matches on outdoor courts. This makes Roger the underdog but I quite like that label and it could even work in his favour.

I don't want to get ahead of myself but should they both meet then I believe it's Roger who has to do something different if he wants to come out on top, he must come in with a clear gameplan but be willing to adapt and change mid match should the moment require it. Maybe even serve underarm if he has to 😛

Prior to the quarters all of Roger's early matches are extremely winnable and should allow him to move through the gears slowly heading into the second week which is clearly a positive.

There's nobody who hits a really heavy ball in this 1/8th who is able to dominate Roger from the back of the court; after Hamburg and Gstaad it's hard to be ultra confident as a fan but I'd say all the early matches are clearly on the Federer racquet.

Not only that should Roger make the semi final he'd likely have to face Gasquet or Ferrer, that one is a buffet match basically; help yourself into the final which would be excellent for the physicality / fitness side of things.

In my opinion this is the toughest quarter and Djokovic has some tough matches should he want to make the anticipated semifinal against Murray. Dimitrov could be the third-round opponent and then we'd then have Del Potro in the Quarter Final.

Much depends on Del Potro's fitness and physical condition as to what whether he can win or not but as we saw at Wimbledon he can certainly cause Djoker a whole host of problems. I do think though that Djokovic maybe out for blood here after a string of tough losses in recent months so he's my favourite if they meet.

Defending champion Murray has a fairly easy start with Michael Llodra in the first round and then he would face winner of Victor Hanescu -Leonardo Mayer neither of whom should trouble him.

Nicolas Almagro would be the fourth-round opponent who is talented but I don't believe he has the required mental strength to win against someone like Murray.

Stanislas Wawrinka, Kevin Anderson and Tomas Berdych are all in the bottom half of this quarter and all those guys have serious firepower. Berdych looked very solid in Cincinnati albeit losing to Nadal as usual but I'd make him the favourite to make the quarters.

This is easily the dullest section of the draw as we have David Ferrer, Raonic and Gasquet all looking for a spot in the semi finals. Ferrer is out of form, but he could come in rested and has a fairly easy route to the quarters.

Raonic comes in after making the final in Montreal but for me he's too inconsistent and lacks good enough movement to make it that far.

I think Gulbis could be the surprise package and I'll pick him to the make the semi finals. I also think a qualifier could come through here into the second week which makes it interesting.

Rafael Nadal is on yet another crazy streak that almost beggars belief, he's just dominated in Montreal and Cincinnati and I think you have to make him the favorite to win the Open.

He starts against Ryan Harrison, who shouldn't be a problem but I'd like to think he could raise his game for his home fans. The fourth round is the interesting one with Isner a potnetial opponent.

Isner lost in the Cincinnati final to Nadal before pulling out of Winston Salem with a sore hip so much depends on his physical well being as whether he can put up a challenge.

Then of course was have Roger, under the radar somewhat with pretty much every tennis journalist putting question marks against his name and doubting whether or not he'll even beat clowns like Sam Querrey.

I agree that he's out of form after a tough year and nothing is a given these days but I think after looking pretty good in Cincy he should make the quarters. 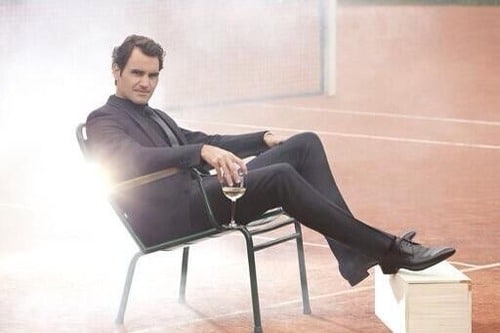 Really I'm just looking forward to sitting back and seeing how the tournament pans out. Due to the time difference I won't be sipping on Moët & Chandon like Roger (but let's face it, nobody even likes champagne anyway, they just pretend to) so it will be more likely Water or Tea to keep me awake.

The draw looks good, the conditions usually suit the Federer game so I think he's in with a good shout of having a successful tournament. Winning it? Unlikely. The bookmakers rarely get it wrong and he's not even third favourite so that tells a story but you can never rule him out completely.

I have a feeling he'll get unprecedented levels of support this year due to the lack of good Americans and just because of the tough year he's had. That could make it pretty electric out there which would be very good to see especially if we get the Fedal quarter final.

As to when Fed's tournament starts I'm not sure, the US Open has the stupid system of playing the first round over 3 days so it could be a Monday, Tuesday or Wednesday.

I will of course be blogging throughout the tournament and hoping I'm forced into doing more match reports that at Wimbledon 😀 Allez la Suisse!

Australian Open Draw 2020: Federer in The Same Half as Djokovic

Roger Federer’s Best and Worst Outfits Of The Decade