So the Draw for the US Open 2011 is out, and it's pretty much gone the way everyone expected. Federer and Djokovic are potential semi final opponents, while Murray and Nadal could meet in the other semi. So it's just the same as the last however many slams. It's becoming as predictable as a Nadal medical timeout before a tie break.

On the flip side, Roger has a pretty good draw – with a potential Wimbledon rematch against Tsonga in the Quarters. Although I actually think he will play Mardy Fish there should he make it as he's the form guy at the minute. In the first round he's playing Colombian Santiago Giraldo, a leftie who he's never played before. However, that makes little difference and this will be a straight sets match. Giraldo has just lost to Roddick in straight sets at the Winston-Salem Open, he lost serve 4 times and the match lasted only 66 minutes. So that's pretty much all the information we need to know it's a regulation match for Federer. Roddick isn't renound as a great returner – yet he broke Giraldo 4 times, ‘nough said. So I'll make an early prediction of that match – 6-2 6-4 6-1

The second round will see him face Dudi Sela, or Tomaz Belluci. I'll pick Sela to make it through as Belluci's game doesn't translate well onto a quick court as he takes about 5 minutes to wind up for a shot. Roger leads the H2H with Sela 1-0 from a meeting at the 2005 French Open, so it's not really much to go on – prime Roger vs a young Sela. I haven't seen Sela play a whole lot but I'd hazard a guess he doesn't have the game or the mentality to win here.

The third round is a potentially interesting matchup – with likely opponents being the next Aussie hope Bernard Tomic, or Marin Cilic. This could be a tough match with the way Roger has played of late – Cilic hits big, and Tomic seems to move well and get alot of balls in play. 2 things that Roger has struggled against lately. Still, there's a question mark whether or not either of these 2 players are consistent enough over 5 sets, so bias or no bias I still have to pick Federer to win through.

If Roger gets through a tough third round match – he'd have a pretty easy 4th round match before the quarters – Kolschrieber, Stepanek, Monaco, veteran Tommy Haas are all in that section and none of them really pose a threat. I expect it would be Stepanek to make it, as his tactic of getting to the net seems to throw alot of lesser opponents.

Djokovic and Nadal both have pretty easy routes to the quarters – I suppose with the way Nadal is playing he could lose early – but Golubev in the first round has no chance. It's not even a tough quarter final for Rafa – with David Ferrer or Roddick his likely opponents. Djokovic arguably has an equally easy quarter final match, with his opponents looking likely to be either Thomas Berdych or Gael ‘I'd rather have a 300 shot rally than try hit a winner' Monfils. If he's fully recovered from his shoulder injury that hampered him at the Cincinnati Masters last week then this should be routine.

Murray has probably the toughest draw – and he could meet Del Potro or Soderling in the Quarters. Although Soderling is surely lacking match practice seen as though he's being injured. McEnroe has publicly stated this is Murrays best chance to win a slam, ever. Not sure he has a point, and besides – who wants that to actually happen!?

Anyway, play starts Monday weather permitting and all I want from Roger is plenty of effort and variation in his play. If I get that and Murray loses in the first round – the tournament will be a great success. 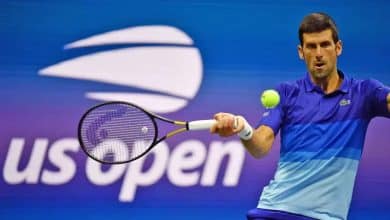