Stefanos Tsitsipas is through the finals in London after seeing off six-time champion Roger Federer in Saturday's semi-final thanks to a 6-3, 6-4 victory.

The Greek put in a tidy performance, saving 11 of 12 breakpoints and taking his chances to ensure Federer was forever playing catch up as he tried to make his 11th final at the year-end championships.

For Federer, it was a quick come down from the highs of his masterclass on Thursday against Djokovic, with his game off the pace from the word go and several routine shots going awry on the crucial points.

Tsistipas will face either Dominic Thiem or Sascha Zverev in Sunday's final and he'll be looking to be the first man to do the NextGen and ATP Finals double having won in Milan last season.

Federer won the toss and elected to receive. Tsitsipas won the first two points, but Roger reeled off the next three to hold an early breakpoint.

The Swiss will have been disappointed not to take it, sending a forehand long off a weak 91mph second serve that seemed to catch him by surprise with how short and slow it was. Tsitsipas went onto hold for 1-0.

Federer kicked off his first service game with a missed overhead, and although he recovered from 0-30, another missed overhead gave Tsitsipas a breakpoint which he converted to take a 2-0 lead.

The Greek consolidated for 3-0 with some powerful serving before Roger got on the board with a love hold for 1-3.

Game five saw Federer again make deuce on the Tsitsipas serve, but his forehand wasn't producing the goods when on the run as Tsitsipas held for 4-1.

At 2-4, two unforced errors in a row gave Roger three break points but some strong play from Tsitsipas and another unreturned second serve allowed the Greek to escape to lead 5-2.

A love hold kept Federer in touch for 3-5 and then came the longest game of the set that saw Roger create a fifth break point after winning an impressive rally. This time around Roger finally made the return, but it was a little safe and Tsitsipas saved it.

A sixth breakpoint followed, but a stiff-looking backhand sailed long, and Tsitsipas eventually held to take the set 6-3 after 13 minute game with eight deuces.

Federer kicked off set two with a 90-second hold to get Tsitsipas serving again, but the Greek was able to dictate from the baseline to quickly level for 1-1.

Game three saw Federer throw in a disaster of a service game with three unforced errors in a row that gave Tstsipas 0-40 and he converted when Federer couldn't dig out a crunched cross-court forehand.

A slick forehand and volley putaway gave Federer an immediate chance to break back in game four at 0-40. However, yet more questionable returning allowed Tsitsipas to make deuce and hold a game point. However, Federer hit a sweet slice dropped shot to set up another breakpoint and finally converted by running around the backhand on a second serve to get the forehand in play.

Game five was crucial for Federer to hold and recover the break fully, but he couldn't make it. Successfully fighting off one breakpoint and holding two game points before dropping serve. Tsitsipas then held to fifteen to lead 4-2.

Federer was then forced to thirty all in game seven, but he held and then had another small window opportunity at 15-30, but Tsisipas closed the door with some strong serving to lead 5-3.

The Swiss was then able to hold for 4-5 to force Tsitsipas to serve it out. Another 15-40 window came the way of the Fedmeister, but he wasn't able to convert, letting out a roar of anger on the first breakpoint and Tsitsipas made deuce.

The deuce point summed up the match, with Federer hitting a gorgeous backhand slice down the line to set up a forehand down the line into a gaping open space but he blazed it wide. That gave Tsitsipas match point, and he sealed it with an ace. 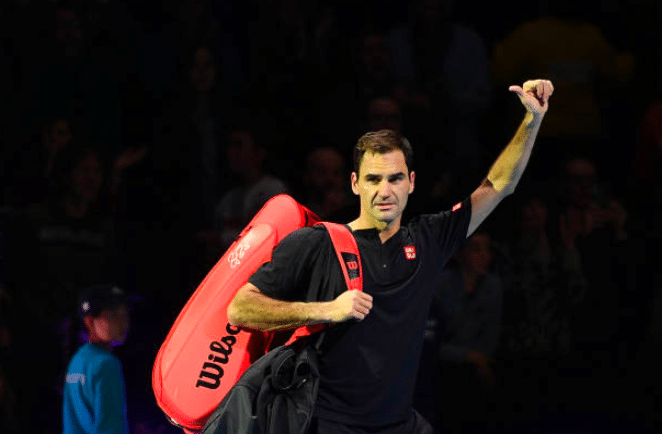 No doubt I had my chances. Yeah, don’t know exactly why it went the way it did, you know. I think getting broken with missing two smashes in one game, that hasn’t happened in a long, long time or ever. So that was tough. That’s not something you can train or practice for. That’s tough, just feet were not quite there yet, still not quite getting used to the high one and all that stuff.

But, you know, I accepted it and moved on and actually got into the match well. Had some good spells, but the spells where things were not working well, they were pretty bad, you know. At this level, you just can’t have it happen, so that was pretty disappointing today.

I actually felt I was hitting the ball okay in the beginning, to be honest. If you take those two smashes away, actually things are okay. I know you say, like, yeah, well, but you missed those two smashes. But they are not forehands and backhands and serves I was actually doing that part okay, I thought, for the first whatever, 10 games, but then again, you know, to be broken 2-Love in the second set with I think no first serves made and stuff like that, and then when you do have the chance to finally get into the lead in the second set, you know, to throw it away again however I did it, it was just frustrating.

But again, I look across the net, and I thought that he played really well. He took the ball early. I know he does that. I thought I returned actually pretty good on the first serve. The second serve on breakpoints and stuff, I guess there were better moments, but for the most part I wasn’t quite getting into the rallies the way I wanted to.  Federer on his loss to Tsitsipas

A bad day at the office for Roger here and he was back to the level of tennis he kicked off the ATP Finals with against Thiem and Berrettini. With the fleet of foot player who took down Djokovic on Friday, nowhere to be seen two days later.

It was always going to be a tight encounter, but unfortunately, Roger set the tone early for how this one was going to play out.

A bad return miss on a tame second serve on a breakpoint in the first game, then two botched overheads in the second to drop serve meant he was immediately playing catch up.

From there it was nothing we haven't seen before, the first serve wasn't firing to win cheap points (just three aces and 56% first serves landed), that put pressure on his forehand to do more in the baseline rallies which in turn drew the errors.

With Federer fighting his own battles to try to get his own game together, when the important points presented themselves on the return, he was not thinking clearly or able to play freely. Missing several routine second serve returns which is why he went 1 for 12 on breakpoints just like the Australian Open.

Anyway, not a loss to dwell on, just one of those days where things don't go in Federer's favour. You don't create 12 breakpoints or make your opponent play 35 more points on serve without giving it all you have on the day, so no complaints from me 🙂

As for Tsistipas, I thought he played a very smart match. Nothing spectacular but he wasn't afraid to go big into Federer's forehand, he moved well (better than Federer which was somewhat surprising), kept his cool on the breakpoints especially in that thirteen-minute game at 5-3 and was the better player from the first game to the last.