What do you get when you combine Japanese manufacturing and sixty years of experience in racquet sports?  If you answered some of the best tennis strings on the market, then you'd be correct 🙂

The brand I'm talking about here is Toalson, I first came across them several years ago when a stringing machine I'd purchased came bundled with a pack of a string called Rencon Devil Spin.

“Ah, they chucked in a cheap pack of string for me to practice with, cool.” I thought to myself.

Little did I know that I'd go on to try several other Toalson strings and be a repeat customer after trying that one pack.

So who are they, why have you never heard of them, and why do I rate them so highly? Let's take a look.

Contents hide
1 Who Are Toalson?
2 Why Are They Relatively Unknown?
3 Toalson's Range of Tennis Strings
3.1 Rincon Devil Spin
3.2 Joker Core
3.3 Asterisk
4 What About Toalson Racquets?
5 Why I Like Toalson Strings

The firm manufactures many strings at their dedicated factory in Oita, Japan and produces a range of multi-filament, polyester, and nylon tennis strings.

Why Are They Relatively Unknown?

If you asked a thousand tennis players in the United States or Europe to name their favourite tennis string, I'd be shocked to hear anyone come up with Toalson.

The firm does very little marketing in the West, and their strings are not readily available at your large retailers like Tennis-Point, Tennis Warehouse, and Tennis Express, etc.

You don't see any big-name ATP or WTA players using their gear either, so they are completely under the radar.

However, one name you would likely hear players bring up is GAMMA, especially in the USA. They are a very popular string brand, and if you do some digging, you'll find that Toalson actually produces GAMMA strings.

The American firm takes care of the branding and marketing side of things, which they've done successfully judging by how many players use their TNT, Livewire, Ocho, and Professional strings.

Aside from GAMMA, the chances are if you've used any synthetic gut string in your racquet and it was made in Japan, it was probably produced by Toalson who operates as an OEM for several of the big brands.

So while you haven't heard of them directly, you've likely used their string at some point 🙂

I've tried several Toalson strings and will be doing some dedicated reviews for them in due course, but here's a quick overview of some of the lineup I have tried.

Rencon Devil Spin is one of Toalson's polyester strings and has three raised monofilament cores to give a rough finish for increasing spin.

It is one of the most spin-friendly polyesters I've ever used and offers great durability and tension maintenance. If you use strings such as RPM Blast, Tour Bite, Volkl Cyclone, Luxilon ALU Power, etc., then you should absolutely give this string a go.

It's not arm-friendly and is an absolute pain to string with, but if topspin is what you after, Rencon Devil Spin delivers it.

If you ever used Gamma Zo Verve, you'll see plenty of similarities 🙂

Joker Core is a co-polyester multifilament with a high viscosity core centre. It's much softer than the Rincon Devil Spin and offers ample power.

It feels springy when you use it, and although it's still a polyester string, you get a pretty nice pocketing feeling on the ball when you go big from the baseline.

Asterisk is a synthetic gut string, and for the price, I don't think there is a better variant out there.

As well as a great price to performance ratio, Asterisk is exceptionally easy to string with making jobs faster and less harsh on the fingers.

Any club stringer who is using synthetic gut for members should be picking up this by the reel.

I've used this string in a hybrid as the cross string with a polyester main, and it works very well. Slightly firmer than some other multifilaments which translate into better durability but there's no real drop in comfort levels.

What About Toalson Racquets?

Alongside the strings, Toalson also produces a limited number of racquets such as the S-Mach Tour 300.

Unfortunately, I've not had the chance to try any of them, so I can't vouch for their quality control or overall playability.

Still, given what we know about Japanese racquets and their manufacturing thanks to Yonex, I imagine they are very well made.

I'm not aware of any ATP Pro's currently using them, but I guess some lower-ranked Japanese players will be using both Toalson racquets and strings.

The only time I've seen them on the court recently is in the hands of Maria Sharapova's former coach, Sven Groeneveld, who is one of their brand ambassadors.

Update: Sven Groeneveld told me Bruno Kuzuhara, a top ITF Junior is using Toalson gear, and also thanks Daniel in the comments who let me know JP Smith has been using Toalson strings and overgrips.

They also do a 60 square inch racquet called the Sweet Area Racket 320 to improve your hand-eye coordination and focus on hitting the middle of the racquet.

The main reason I like Toalson is the price to performance ratio. You are getting high-quality strings at a fraction of the price that some big names charge.

For example, I can pick up a set of Rencon Devil Spin for £6.95. Babolat's RPM Blast is almost double the price. While I do like RPM, I'd pick Toalson over it every time.

If you feel like your string expenditure is too high, I'd recommend giving whatever equivalent string Toalson have in their lineup a try. You'll certainly be saving money, and in most cases will be using a near-identical string, or an even better one. Win-win.

Have you tried any of the Toalson strings? Do you know which other strings they make for some of the big European brands? Let me know in the comments. 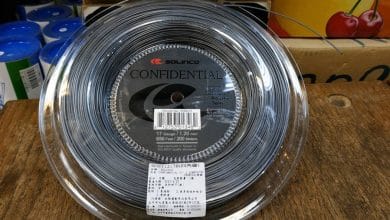