Seventh heaven for the GOAT as he defeated Novak Djokovic 6-3 7-5 to successfully defend his title and win a seventh Dubai crown in a high quality final at the Aviation Club.

The win also saw him break the 9000 aces barrier when he fired down his 5th of the night in the sixth game of the second set. Quite fitting he reached the milestone in what was one of his best clutch serving displays ever, saving all 7 break points he faced and holding serve from 15-40 three times in total. Just another top quality performance from Fed 4.0 who seems to defy all logic and is still capable of producing unrivalled tennis at the latter stage of his career. 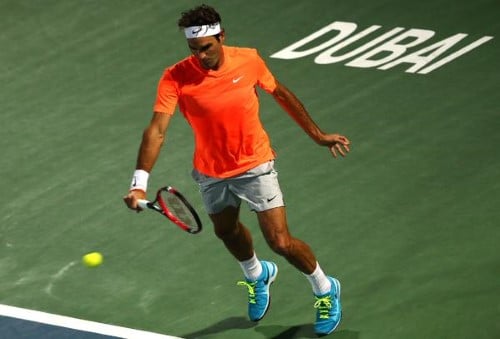 Roger won the toss and elected to serve holding to 30 to take a 1-0 lead. The Swiss then made immediate inroads into the Djokovic serve taking it to deuce before Novak levelled at 1 apiece.

In game 3 Djokovic had his first 2 break points at 15-40 but Roger held firm, making deuce before taking a 2-1 lead. Both players then exchanged back to back service holds but it was Roger creating more opportunities, pouncing on anything short and constantly pressuring Djokovic with some crisp ball striking. At 4-3 he got his just rewards converting his first break point when Novak went long with a backhand. He then served out the set to take it 6-3.

Into the second and it was inevitable that Djokovic would knuckle down and begin to zone in on the return. However the Federer serve was firing on all cylinders, hitting all 4 corners of the box giving him plenty of service holds to 15 and in game six Roger recorded his 9,000 career ace.

At 3 games all Roger then created love 30 on the Djokovic serve with 2 absolutely insane down the line backhand winners. They went like bullets and it looked like he was just about to raise his level up a notch but unfortunately, be it adrenaline or a slight switch off he allowed Djokovic to win 4 points in a row to hold for 4-3.

The wasted half opportunity looked like it could cost him as he slipped to 15-40 in his next service game, only to save the first break point with an ace and the second with another huge serve. 4-4. Clutch.

A comfortable Djokovic hold followed and the Serb again had 2 break points at 5-4, which were again saved in sublime style by Fed as he held to make it 5-5. Djokovic had been the more solid player in set 2 and when he moved up 40-0 it looked like he'd be getting a tie break at the bare minimum. However he lost 3 points in a row and then challenged a first serve at deuce which was out. The pause between play broke his rhythm and he double faulted to give Roger his first break point of the set, which he converted with a sweetly timed inside out forehand after a great return of serve.

Serving out matches is the toughest proposition on tour, especially in a final and Fed didn't make it easy for himself, opting to play a ridiculous drop shot which landed wide to slip to 0-15. That was soon 0-30 but he reeled off 3 points in a row with more clutch serving to hold championship point. Djokovic saved it when Fed netted a forehand and then had another chance to break back when Roger double faulted. Yet again he saved it, coming up with a fantastic overhead to put the score back at deuce. Next came an ace out wide which brought up the 2nd championship point and he sealed it, firing down a big serve and cleaning up the short ball with a thumping forehand winner into the open court. Allez! 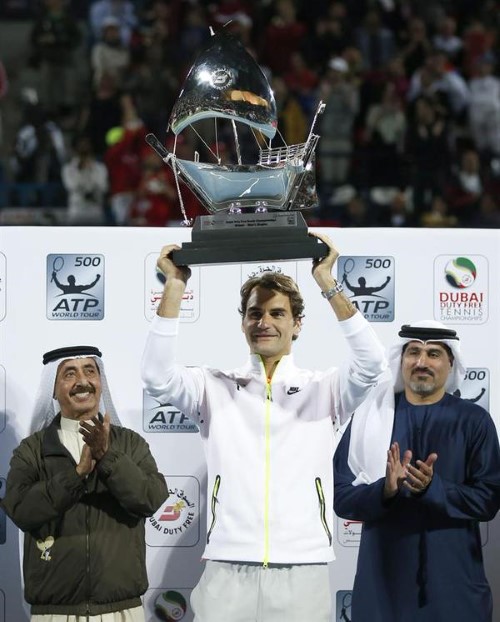 I think the first set belonged to me; whereas the second set belonged to him more. He created many more opportunities. I struggled to get into his service games more frequently. It seemed like the moment I wasn't serving great he created chances for himself and put a lot of pressure on me. It was a huge game clearly at 5-5, 40/0 for him. I crawled my way back into the game and ended up breaking him. So that was big, but I think the break points saved were even bigger tonight.

It's been nice seeing Novak's improvements over all these years. He's become such an unbelievable player, especially the past five, six years, and cleaned up his game so nicely and became the best mover in the game. It's really a pleasure playing against him every single time again.

Another fantastic win in the UAE for the GOAT and this surely has to go down as one of his best ever wins in Dubai as he beat Djokvic in a final for the first time since Cincinnati in 2012 and was 100% on break points converted and saved for the first time ever in 126 finals.

Matches like this one just show if you put Fed on a fast outdoor hard court then he's incredibly tough to play against. It's just first strike tennis at it's finest and with Edberg pushing for him to use his volleys all the more regularly he's playing the right type of tennis he needs to get the results that matter.

Not only that but he's taking on the best player in the world and the best mover on his own preferred surface and coming out as the winner. No building positive Head to Head records by only playing on surfaces where things are hugely in his favour; hard court is the most neutral surface out there and Fed is going toe to toe with a guy who's hard court win % is right up there.

In terms of where the match was won and lost I think Fed played with a real high level of intensity from start to finish and that's what got him over the line. He took it upon himself to rip all his shots and keep moving forward at any given opportunity. His serve was also key in the big moments to save the break points and he was very dialled in whenever the pressure was on. In fact he won 9 out of 9 pressure points which made the difference.

As for Djokovic it's hard to really say what he could have done differently. The margins are stupidly small at this level and a few points here and there could quite easily shifted the match to a different outcome. Very similar to the Wimbledon final in that sense as it was decided by just a handful of key points; Djoker won more of them at SW19, Fed won more in Dubai and the results reflect that. The only real complaint of his can be getting broken from 40-0 up at 5-5 in the second set. That ultimately cost him the chance of at least taking it into a decider, not the failure to break serve.