Inspired by a recent comment from a reader I thought I'd look into the various models of racquet Roger Federer has used since he went pro way back in 1998.

At the moment we all know that Federer uses the Wilson Pro Staff RF 97 Autograph and has done since 2014. But before that, he used a 90 square inch frame for most of his career.

While it's now agreed that the retail version of the RF97 is almost identical to the one Federer uses, his previous racquets were always hotly debated on the forums and fans wanted to know if Roger used the racquet that we could buy in the shops and carried his signature.

Some fans believed that Roger used a custom version based on the Pro Staff 85 that was sprayed up to look like the latest model. Some were reasonably confident the retail specs were very close to his own, and there were even some who refused to believe he'd ever moved from an 85 square inch frame 🙂

What we do know for sure is Federer didn't get a new Pro Staff 90 every time Wilson updated it. So he was using a Pro Stock variant of 90 sq” model with some subtle differences compared to the retail version – the weight, handle thickness, balance, swing weight, lead tape etc. were to his taste. All of which was handled by Priority 1, his racquet customisation house of choice.

Federer has used a Wilson racquet for all of his career, playing the majority of it with a 90 square inch racquet head that had a 16 x 19 string pattern with natural gut on his main strings, Luxilon Alu Power Rough on his crosses Along with some string savers which add durability and power pads.

Before that, he used a Pro Staff 85 square inch racquet that used Babolat all-natural gut strings on both crosses and mains.

Let's take a look at the different models that Roger has used, and Wilson have marketed as his weapon of choice since the start of his career.

The image above is from Geoff Browne who has every model Federer has used, quite the collection!

This is the racquet that Federer was using when he first burst onto the scene and is the one he used to beat Sampras at Wimbledon way back in 2001.

Ironically it's the same racquet used by Sampras himself, so he was dismantled by his own weapon of choice that day.

Unlike all Roger's later racquets which are all 90sq” this one is an 85 square inch head, which by today's standards is very tiny. You won't see many any pros using a racquet this size and can you imagine Nadal playing on clay with something like this?

Roger used this racquet between 1998 and 2001 in which he featured in the main draw of 10 Grand Slams. It was also the racquet he was using when he decided to dial down his on-court temper after losing in Hamburg against Franco Squillari. Roger smashed his racquet up badly that day after losing in the first round but decided from there on in he had to control his behaviour as it cost him matches.

Years Used: 2002 up until the French Open

This was the racket of choice for Roger at the start of the 2002 season, but it was merely a paint job over his Pro Staff 85.

The retail specifications state it was a 95 square inch head, but as we know, Roger has never used above a 90 sq inch head. To jump from an 85″ to a 95″ is unlikely anyway.

As far as I'm aware Roger only used this racket at one Grand Slam which was the Australian Open in 2002, he then changed to a 90 square inch racket after the early American Hard Court tournaments of Miami which was called the NASDAQ-100 Open back then.

At the French Open 2002, Federer used the Hyper Pro Staff 6.0 Yellow W, which was the first time he had used a 90 square inch frame. This racquet was painted up again to look like the 95 square inch model, but of course, it wasn't.

After that Roger used the Hyper Pro Staff 6.0 from Wimbledon 2002 up until the start of the 2003 season.

The retail specification of this model is the same as the one above. In terms of the racquet Federer was using, it was a Pro stock 90 sq” racquet sprayed up to look like the Hyper Pro Staff 6.0 model which was a 95 square inch model.

This was the racquet Roger used when he won his first Grand Slam title in 2003 at Wimbledon when he defeated Mark Philippoussis in straight sets.

It was used in 4 Grand Slams in total right up until the French Open of 2004 where he switched to use then newly released nCode design.

The red and white paint job on all Federer racquets started with the nSix-One Tour racquet which was part of the nCode range they brought out.

Roger used this to defend his title at Wimbledon using it in a total of 11 Grand Slams between 2004-2006, some of his best years on tour.

The legendary racquet that won Roger the French Open in 2009 and then a marathon Wimbledon final against Andy Roddick a month later.

I used to own one of these, and in the strike zone it was a beauty to play with, tricky on higher balls and it was heavy so rather unforgiving but I bought it as I just loved the design.

I was never a fan of the design of this racquet, and that was justified as in terms of slam victories this it performed the worst of them all. Roger only managed to win the Australian Open in 20120 with the BLX.

It featured in 8 Grand slams from Australia 2010 up until the 2011 US Open, so basically, this was the stick that in Federer's hands when he lost both matches against Djokovic in New York despite having match points! Ouch!

The racquet that took down the Wimbledon 2012 trophy for Roger and an all-time classic design. Looks quite similar to the K Factor.

Years Used: 2013 in Hamburg and Gstaad

The big change to Roger's racquet came after his shock second-round loss to Stakhovsky at Wimbledon in 2013. Roger added both Hamburg and Gstaad to his schedule and then announced he would be playing with a brand new racquet.

This was a prototype model, and there's not a whole lot know about it. It's said Federer tested out a few different frames, including a 98 square inch racquet, probably the H22 which is relatively similar to a Blade 98.

However, after suffering tough losses on the European Clay due to a bad back, he reverted to the Pro Staff 90 for Cincinnati and used it until the end of the year.

Although Federer reverted to his 90 square inch model to see out 2013, the switch in racquets was still part of his plan.

The prototypes he had used in the summer of 2013 were sent back to Wilson for some tweaking, and a few iterations later saw Roger take to the court in Brisbane, January 2014 with the new Wilson Prostaff RF97 Autograph.

This was a 97 square inch head racquet with a 16 x 19 string pattern. In many ways, it was a blend of the things Federer liked about his 90sq” racquet in terms of string pattern, weight, box beam design etc., with a larger head size to be that bit more forgiving.

2017 saw the launch of the matte black Wilson Pro Staff RF 97 Autograph. It had the same specs as the original RF97 model but packed a black matte finish, and a small silhouette of Federer plus some laser engraved graphics. It also had a new textured feel as per Federer's request.

The racquet saw instant success as Federer won the Australian Open, the Sunshine Double, Wimbledon, Shanghai and Basel in 2017.

First seen at the start of the grass-court season in 2018, the tuxedo frame was identical to the matte black frame in terms of specs, but had the new paint job.

Roger named it the Tuxedo racquet, but it didn't last long, as after Wimbledon he elected to go back to the all-black frame, probably for psychological reasons more than anything else. 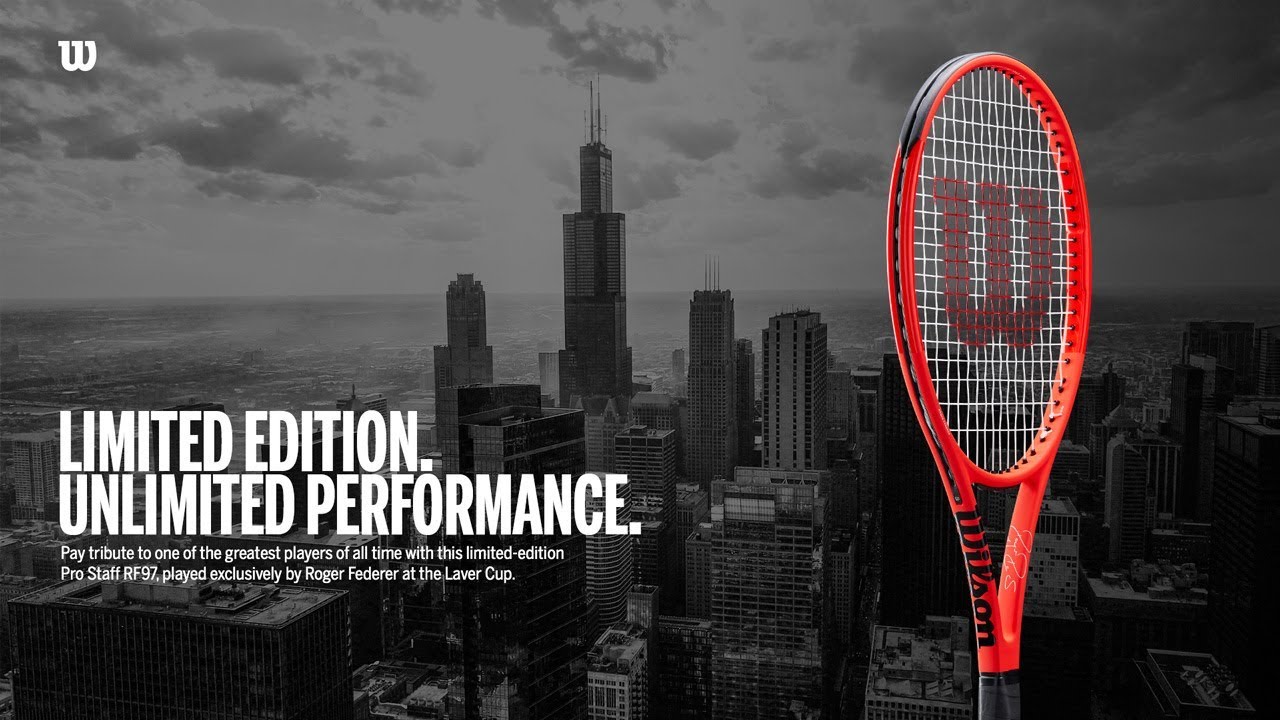 The second edition of the Laver Cup saw Wilson launch an all Red Special Edition RF97 Autograph and Roger used it all his matches in Chicago during the weekend.

It's not been used by him since, and he's unlikely to use it again as I assume most were auctioned off or given away to Charity.

Following the trend from the Laver Cup in Chicago, Wilson launched another limited edition model for Geneva, this time an all-blue model. Same specs, just a new paint job.

Launched in 2020, the Prostaff RF97 V13 features the exact same specifications and composition as Federer has used since 2014. However, the design language has changed to pay homage to the original Pro Staff from the 1980s.

It features a black elastic base, exposed carbon fiber weave with gloss finish at the tip above the 3 & 9, and two-toned pinstripes along the throat.

Quick Recap of the racquets used by Federer since the start of his career:

So as you can see, Roger's racquet specification hadn't changed over the years up until 2013 when he made a big change to a 97 square inch racquet head size we see today.

I'm sure he has experimented with different grips, weights, lead tape, strings over the years but the 90 square inch head with a 19 x 16 string pattern had been ever-present until he decided he needed to change his equipment to try and compete with Djokovic and Nadal.

Which racquet is your favourite out of all the models he has used and why? And if you play, which racquet do you use? Let me know in the comments below.