Our countdown of the greatest Open Era champions in US Open history finally reaches its end. For those who need a refresher:

Sampras burst on the scene in 1990, and the soft spoken American with a massive game awed the US Open crowd by beating Lendl, McEnroe, and Agassi in succession to win his first grand slam title. This would be a fitting introduction to the man they called Pistol Pete, as over the years, Sampras’ aggressive game and lion’s heart would be a deadly combination on the courts of Flushing Meadows.

Sampras would go on to make the US Open final two years later, but lost a close match in the final to Stefan Edberg. Sampras was not quite ready to consistently win on the big stage, and it showed in 1992, but that would change very quickly as Sampras would roll to two majors the following year, including the US Open, which he won in impressive fashion, albeit facing the weakest opposition of any of his 5 runs.

Sampras looked to be the odds on favorite in 1994 as well as he had completely dominated the first seven months of the year, but an unfortunately timed ankle injury suffered in a Davis Cup tie against Richard Krajiceck hampered him all summer, as he was unable to play in either Canada or Cincinnati, and an underprepared Sampras crashed out to Jamie Yzaga in the fourth round. However, the next two years would more than make up for that.

The 1995 US Open was one of the most highly anticipated majors of the 90’s. All eyes were on two men: Andre Agassi and Pete Sampras. Sampras had won Wimbledon, but Agassi had beat him in Australia, was the defending champion in New York, and went 20-0 in the summer hard court season, beating Sampras in the Canada final and claiming the number one ranking in the process.

The whole tournament was a collision course between these two champions, and after Sampras brushed aside Courier in the first semi, Agassi got his revenge against Becker in the second after blowing a set and two break lead against the German in the Wimbledon semifinal. Afterwards, Agassi looked into the camera and famously said, “I’m coming Pete!”

However, Pete was more than ready. Agassi came out flat after getting off the court after 9 PM the night before, and Sampras blitzed him in the first two sets. Agassi had overplayed that summer, and it seemed to have finally caught up to him in this match. Agassi would eventually sink his teeth into the match and win the third set, but Sampras hung tough on serve in the fourth and broke a fading Agassi at 5-5. After Sampras slammed down an ace on match point, he had prevailed in a match that would shape the rest of the decade. Sampras had regained his throne, and Agassi career would veneer off course for the better part of the next three years.

However, Sampras’ truly iconic moments at the US Open were still to come. Perhaps THE moment occurred in the 1996 quarterfinals against Alexander Correjta. 1996 had been a tough year for Sampras. He relinquished his Wimbledon crown and struggled through the death of his beloved coach earlier in the year. The US Open was a must-win major, but Sampras was in deep trouble in the quarters, down two sets to one. Sampras fought back to force a fifth set tiebreak, but Sampras’ health started to fail him as some combination of a stomach bug and dehydration had him hunched over and panting after nearly every
point.

Sampras would even throw up on the court, and Correjta would get to match point at 7-6 in the tiebreak. What would follow is one of the most courageous sequences in history. With his body ailing, Sampras produced a stunning low volley and then a spectacular lunging volley to save the match point. Pistol Pete then conjured up a match point of his own with a second serve ace from out of nowhere, and the Spaniard’s resistance finally crumbled, as he double-faulted on match point to end one of the best matches in US Open history.

Sampras had left his guts on the court, literally, and displayed tremendous mental fortitude to keep his hopes for the title alive. He was hooked up to an IV after the match ended but
recovered for the semis and finals and produced masterful performances to defeat Ivanisevic and Chang for the title.

From there, Sampras would once again be bitten by the injury bug in New York. A leg injury in 1998 caused him to be unable to close out Pat Rafter in the semifinal after being up two sets to one. A back injury in 1999 caused him to withdraw from the tournament entirely, a real shame as once again Sampras and Agassi, who had rediscovered his career, seemed to be destined for a finals rematch.

In 2000, Sampras reached the final but was simply blown off the court by 20 year old Marat Safin in one of the best performances anyone had ever seen. That was the first time Sampras had looked truly helpless at the US Open, and age and declining motivation seemed to be getting to Sampras, but he still had some more magic left in him.

Sampras had a disappointing 2001, but once again the US Open served as a tonic. He defeated a brutal gauntlet of opposition leading up to the final, as he destroyed Rafter in the fourth round, defeated Agassi in a four tiebreak quarterfinal classic that remains one of the highest quality matches ever, and then got revenge over Safin in the semis, repaying him the straight sets beating Sampras had received a year earlier. However, once again Sampras would be rendered helpless in the final as 20 year old Lleyton Hewitt produced a returning and passing shot clinic to blow away an ailing Sampras, 6-1 in the final two sets.

Sampras’ downward spiral continued, as 2002 was a dreadful year for him. Sampras’ ranking plummeted, and he came into Flushing Meadows as the 17th seed. Few gave him a chance to win the tournament, and Agassi and Hewitt were heavy favorites, but Sampras, unlike any other great champion before him, would silence the naysayers and go out on top. The first hurdle was surviving a five set war with Greg Rusedski in the third round. Before and after the match, Rusedski’s commented that he thought Sampras had no chance to win the tournament, verbalizing what most tennis observers likely thought as well.

However, Sampras would prove them all spectacularly wrong and find the game that made him a living legend. He produced clinical attacking tennis in the form of eighty-two winners to dismiss the talented Tommy Haas in the fourth round, and then gave a 20 year old Andy Roddick an absolute masterclass, free of charge, in the quarters.

Sjeng Schalken was no match in the semis, and once again Sampras was in the US Open final against a familiar foe: Agassi. While Agassi was the favorite on paper, as he was still playing good tennis on hard courts and had just beaten Hewitt in the semis, on a fast court in a big match this rivalry usually had a familiar ending.

Sampras may have been old, but he still had plenty of magic left in his antiquated ProStaff 85, and a dumbfounded Agassi was reduced to one of the 23,000 spectators in Ashe, as thirty-three aces and a staggering eighty-four winners in total flew past him. It was Sampras’ last ever match, but it was still surely one of his finest displays of serve and volley tennis.

With more than eighty winners in four sets or fewer not once but twice in the tournament, Sampras’ run was surely one of the finest displays of attacking tennis ever, a fitting cadenza from probably the most adept attacker in the history in the game.

Sampras would leave tennis the way he had always played it: on his terms. By doing what seemed impossible, winning a major at his age playing strictly serve and volley in a time where poly strings and baseline play was starting to dominate the tour, one of the greatest ever provided a fitting ending to his fairytale career as Pistol Pete finally holstered his pistol and rode off into the sunset a US Open champion.

Serbs Him Right, No Djokes 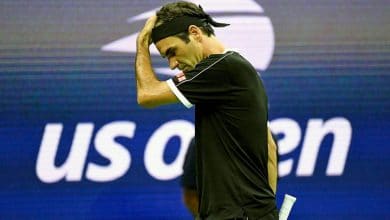 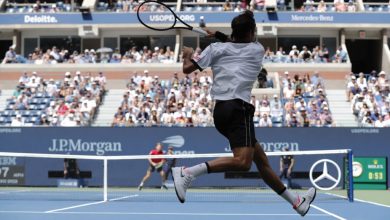 Federer Gives Goffin Drubbing in US Open Fourth Round 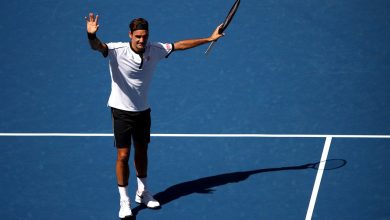 Federer Eases Past Evans into US Open Fourth Round