If Bernard Tomic is ever remembered for anything, it will be for how spectacularly the expectations he had for himself, and the tennis world for him failed to align with empirical reality.

Six years removed from his breakout run at Wimbledon as a teenager, which ended in a four-set quarter-final defeat at the hands of eventual champion Novak Djokovic, the 24-year-old Australian must be painfully aware that he has little chance of salvaging what’s left of his once-promising tennis career. In case you need reminding, before Alexander Zverev, Dominic Thiem and countryman Nick Kyrgios arrested the attention of the tennis universe with their precocity, Tomic was the youngster most regularly tipped for greatness.

Tomic bought into the hype surrounding his meteoric ascent- he rose from No.208 in the world rankings at the beginning of 2011 to No.42 at the end of the same year- and proclaimed in no uncertain terms that the world number one ranking would be his in only a matter of time.

Ask yourself this: Does anyone still wait with bated breath for such an outcome to materialize? Then follow it up with an equally outlandish question: Do pigs fly? Compare your answers. If your thought process is anything like mine, they might both be the same.

The world No.59’s latest gaffe, which was to own up to faking a back injury during his languid first-round loss to Mischa Zverev at this year’s Wimbledon, did not surprise anyone who takes Tomic at his word. On more than one occasion, Tomic has stressed to reporters that his love for the sport is not an all-time high; in fact, it is non-existent.

Tomic stated in Tuesday’s post-match press conference with perfect candour that he took a medical timeout for the phantom injury to throw his opponent off course; he decided to do so at the most identifiable event on the tennis calendar, no less. It didn’t seem to occur to him that in full view of the onlooking public, he was expected to try at least and win the tennis match using more conventional means.

Furthermore, it is no canard, more so an established truth, that Tomic’s only motivation to keep playing tennis at the professional level is to grab as big a piece of the prize-money pie as possible so that he never has to work for another day after he retires. Some goal, eh? In his words circa May 2016, “My job is to play tennis until I’m done, I’ve had enough, and until I’ve made enough money.” Upon reflection on Tuesday’s head-scratching antics: “I felt a little bit bored out there…The last sort of year or two, nothing motivates.”

I for one appreciate Tomic’s cavalier persona (tennis players are instead ‘closed’ books these days) but at the same time recognize that behaviour like his is symptomatic of a torn psyche. It is one thing to tank a tennis match, a habit he first adopted in 2012 when a semi-retired Andy Roddick gave him a 6-3 6-4 6-0 thrashing at the US Open, and quite another to openly admit it, as he taken to doing in the last year or so.

That he is willing to fess up to putting forth such an anaemic effort towards his career speaks to how detached from tennis he has now become. Also, another facet of Tomic’s troubles that occasionally rears into focus is the strained relationship between him and his volatile father John, who also doubles up as his coach. John Tomic, to be frank, has a propensity for violence; in 2013, he headbutted his son’s hitting partner after a practice session in Madrid and is said to have used Bernard as a verbal punching bag when he was still a junior (how much truth there is to the latter claim I can’t verify).

Just as damaging to his prospects of success is Tomic’s love of fast cars and loose women, a trait he shares with guys like Marat Safin, Mark Philippoussis and Marcelo Rios, who were considered the most talented headcases of yesteryear.

The Stuttgart-born enfant terrible is a complex character who is lacking in self-discipline and resilience; though, in his defence, he hasn’t precisely been immersed in the type of environment that would be conducive to straightening out these deficiencies in his personality.

So, what is to be done with a tennis player whose perception of commitment and dedication falls radically short of what is expected by the sport’s governing bodies, fans, as well as retired and active professionals? The fine that was meted out to him on Thursday of £11,600 ($15,000) amounts to little more than a slap on the wrist for a man who has racked up over $5 million in tournament winnings alone, even if it is the second largest in Wimbledon history.

Tomic’s racket sponsor, Head, took a step in the right direction by cutting him off and issuing a statement to condemn his recent comments. There are other options the ATP could explore- a punitive ban or rehabilitative counselling seem like the most actionable ones and could be implemented concurrently. Let’s take a closer look at these.

Suspending Tomic until the end of the year would be a tad harsh, even people baying for his blood like Martina Navratilova and Brad Gilbert would be loathe to admit. Banishing him to the sidelines for a shorter period- say until the US Open- would be a reward rather than a punishment for Tomic; he might take the opportunity to jet off on holiday.

Administering counselling sessions might be a viable route to helping Tomic get out of his current rut, but in the long term, how useful would this solution be if he doesn’t attend the sessions consistently? Whatever the case, counselling hasn’t had a chastening effect on Nick Kyrgios, who, in a fashion not entirely dissimilar to Tomic’s, continues to approach his profession with maddening disdain.

The best punishment for Tomic, in my estimation, is fate. When Tomic retires at an early age, as he almost certainly will, with a dust-encased trophy cabinet, a bit less in his bank account than he had bargained for and a litany of regrets, the anguish of being subjected to a salvo of criticism from even the most decorated of sportspersons will pale in comparison. Navratilova, Gilbert et al. should, therefore, save their breath for someone worth criticizing.

Tennis enthusiasts, who will no doubt take to Twitter, YouTube and various forums to inveigh Tomic for wasting an opportunity they wish was given to them, shouldn’t allow him to take up any more bandwidth in their thoughts, too.

Tomic, if he is to fail, will fail emphatically enough without anyone hurling abuse his way. Leaving the tour to go and flip burgers at McDonald's so that he can learn what ‘real-life’ is like, as some detractors suggest he should, is the furthest thing from a concrete remedy to Tomic’s problems; if Tomic dislikes tennis as much as he would have us think, then slaving away at something equally monotonous (to him) for a fraction of the pay will not make him appreciate the competitive spirit of the game any more than he does now- instead, just the money that comes with it.

When all is said and done, there is very, very little chance of anyone being able to make an individual like Tomic see the error in his ways, which is why there is no need to tell him what he is doing wrong. Life itself will do a mighty excellent job of doing that for us. 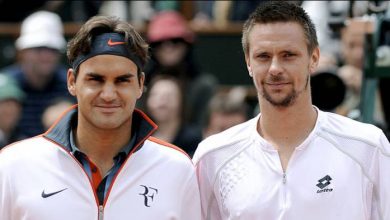 Soderling: Federer Was a Very Difficult Match Up For Me

Part 1 of The ATP Season Length Debate: Not Really about Injuries?