Tennis is paradise in the Coachella Valley. More and more beautiful. The organization is top notch as well. Is it the only major tournament not near a big city? Exciting but serene.

I was keeping an eye on the weather there before the trip. Ten degrees colder than normal. Luckily the days were perfect, not too hot. The nights were cold, especially with the wind blowing down from the snow-peaked mountains. I was wearing four layers with a blanket on my lap one night.

We flew Air Canada this time using air miles as always. It got us there earlier in the day and the flight home gave us more time, leaving at 7 pm on Wed March 13th. I noticed the plane was a 737 Max 8.

Hmmm, didn't I see something about that on the news? Wasn't there a crash somewhere? Oh, just forget about all of that, it's vacation time! More on that later.

Arriving early on Thursday, March 7th, we had all day to shop for food and read by the pool. We stayed in the same cute inn in Palm Desert as last time. A short drive to the tennis grounds.

A Korean woman runs a very tight ship but makes a great breakfast every morning. The next day was shopping, by the pool and out for a nice Mexican dinner. We had planned on going up the Aerial Tramway into the mountains but the roads were washed out because of a massive storm.

Ready For Four Days of Tennis! 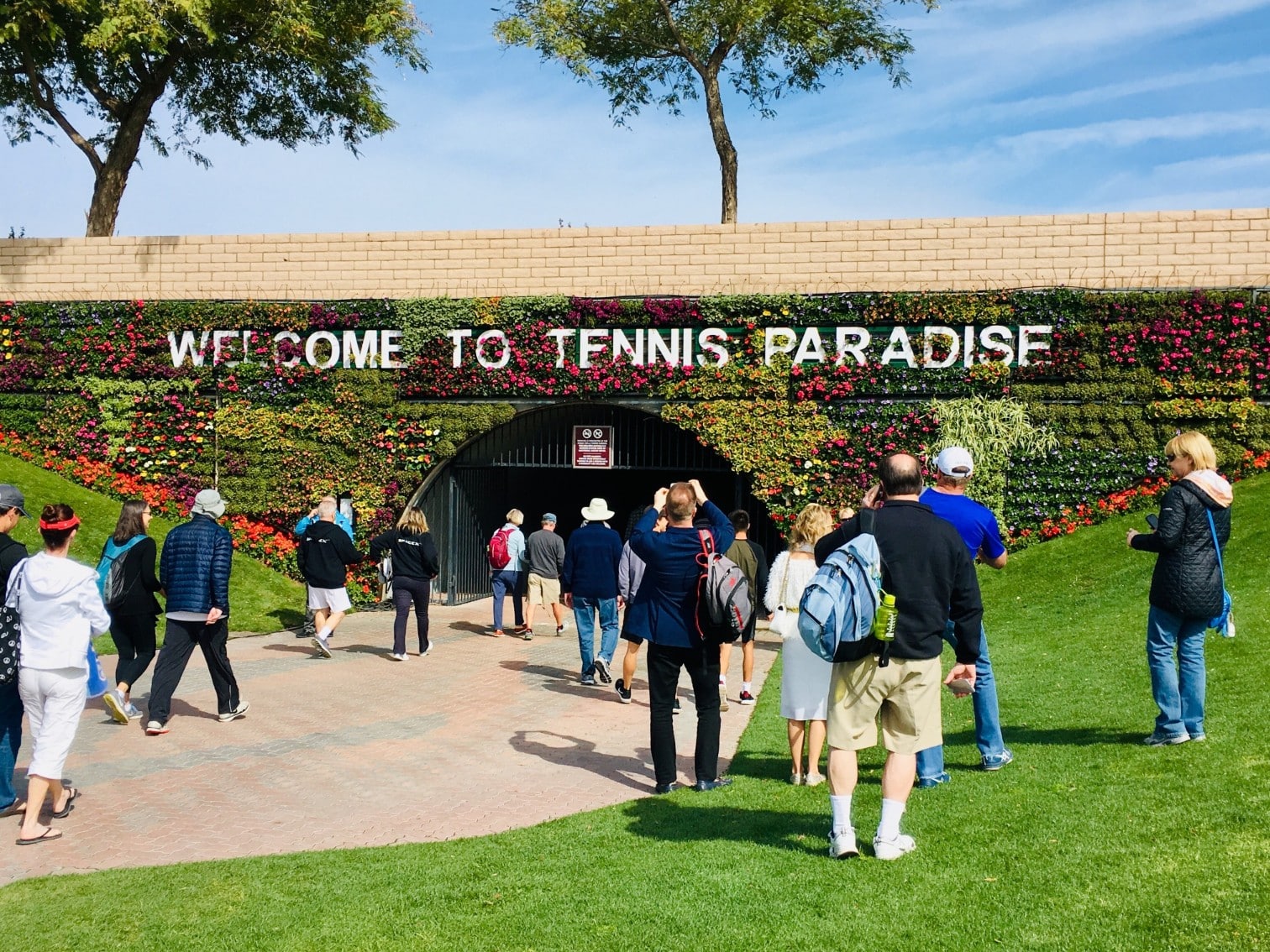 I love the tennis garden so much. In the car rental line-up, I was talking to people from Florida – they prefer Indian Wells to Miami. I saw some great matches this year. 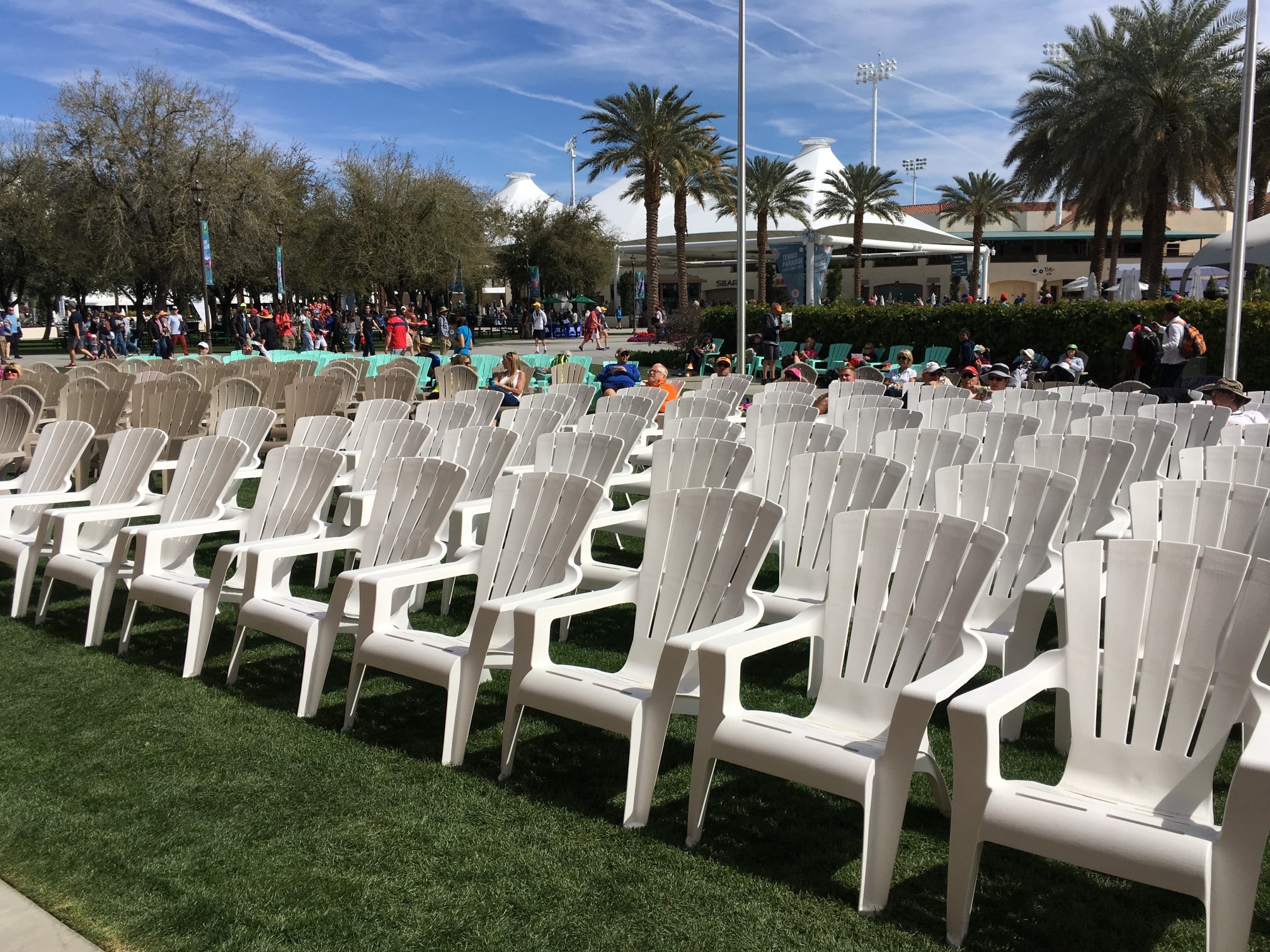 First up was Felix Auger Aliassime over Tsitsipas. We had tickets in Stadium One day and evening for four days. Saturday and Sunday in the best seats and two days in the loge. 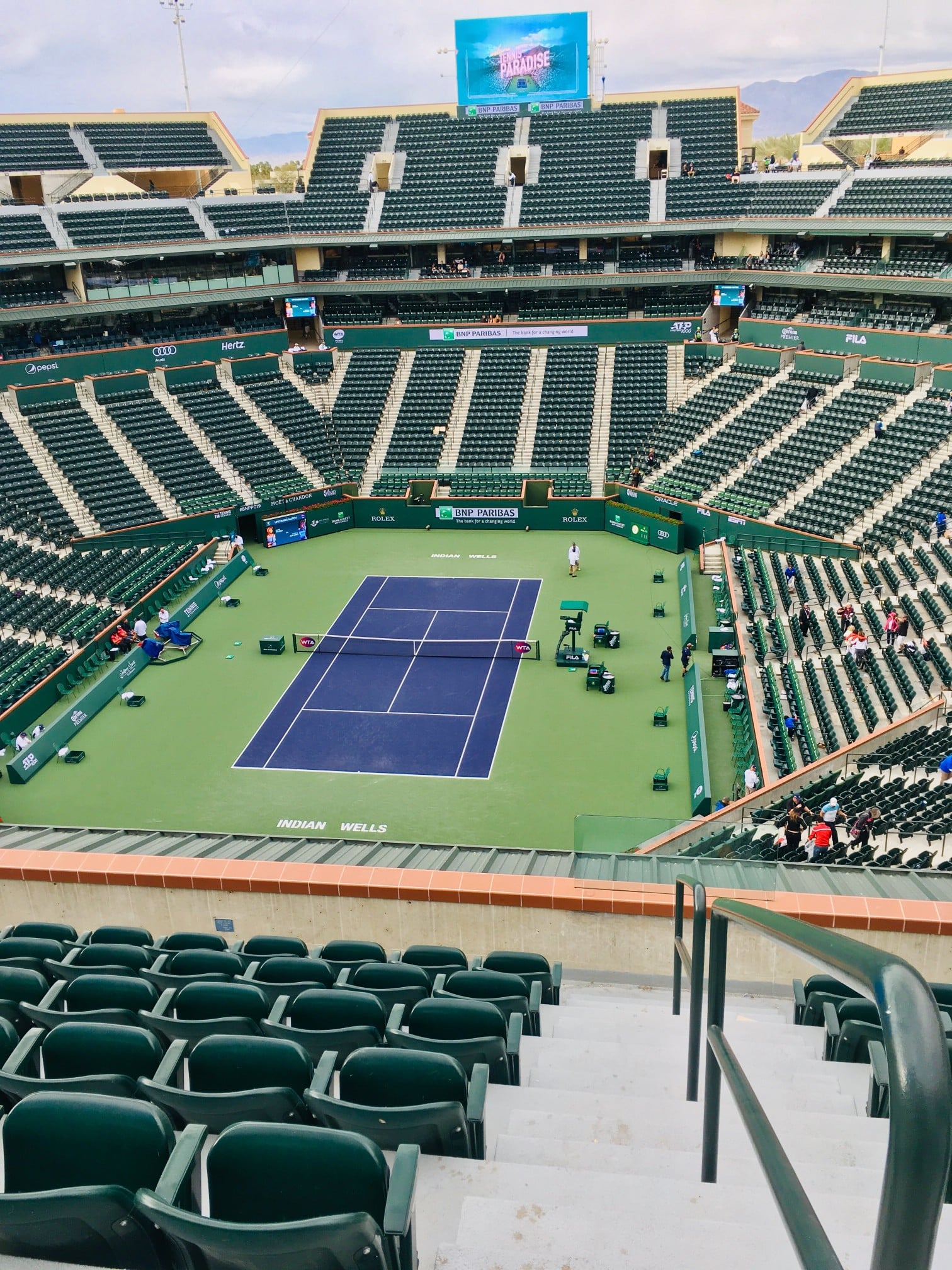 We saw all the Canadians play too. Managed to end up in stadium 2,3 and 4 as well. They offer different looks and closeness to the court. 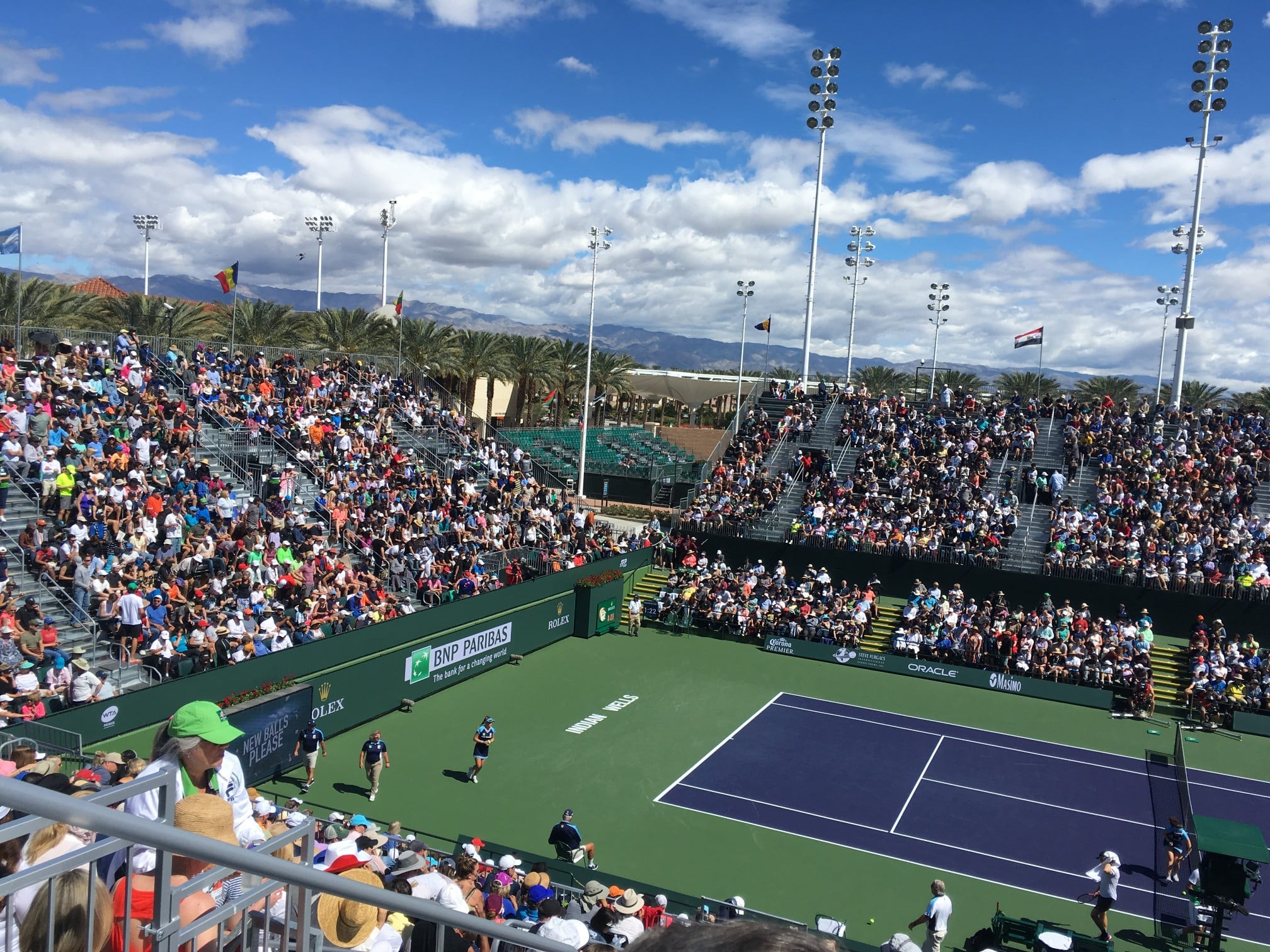 Shapovalov against Cilic on Stadium 3

We then saw Djoker lose. He has such a bad temper one doesn't always see on TV. Zverev looked awful. Many players were fighting a virus. Serena retired.

Also saw Bencic beat Osaka. I was really impressed with her game. Andresscu beat Wang and ended up winning the whole F'ing thing as she said in her presser.

We try and see the players we haven't seen before, so we fit in a lot of matches. A little crazy. One night we sold our tickets. Nadal was playing, they love him in Indian Wells too.

Another night we stayed to watch the matches in stadium two and couldn't unload the Djokovic match tickets on Stadium One. No one was interested!

Now to Roger. He has this aura about him that is mesmerizing. Right, guys? There is always an excitement in the air when he's playing. The crowd is always silent during play, not like the USO. 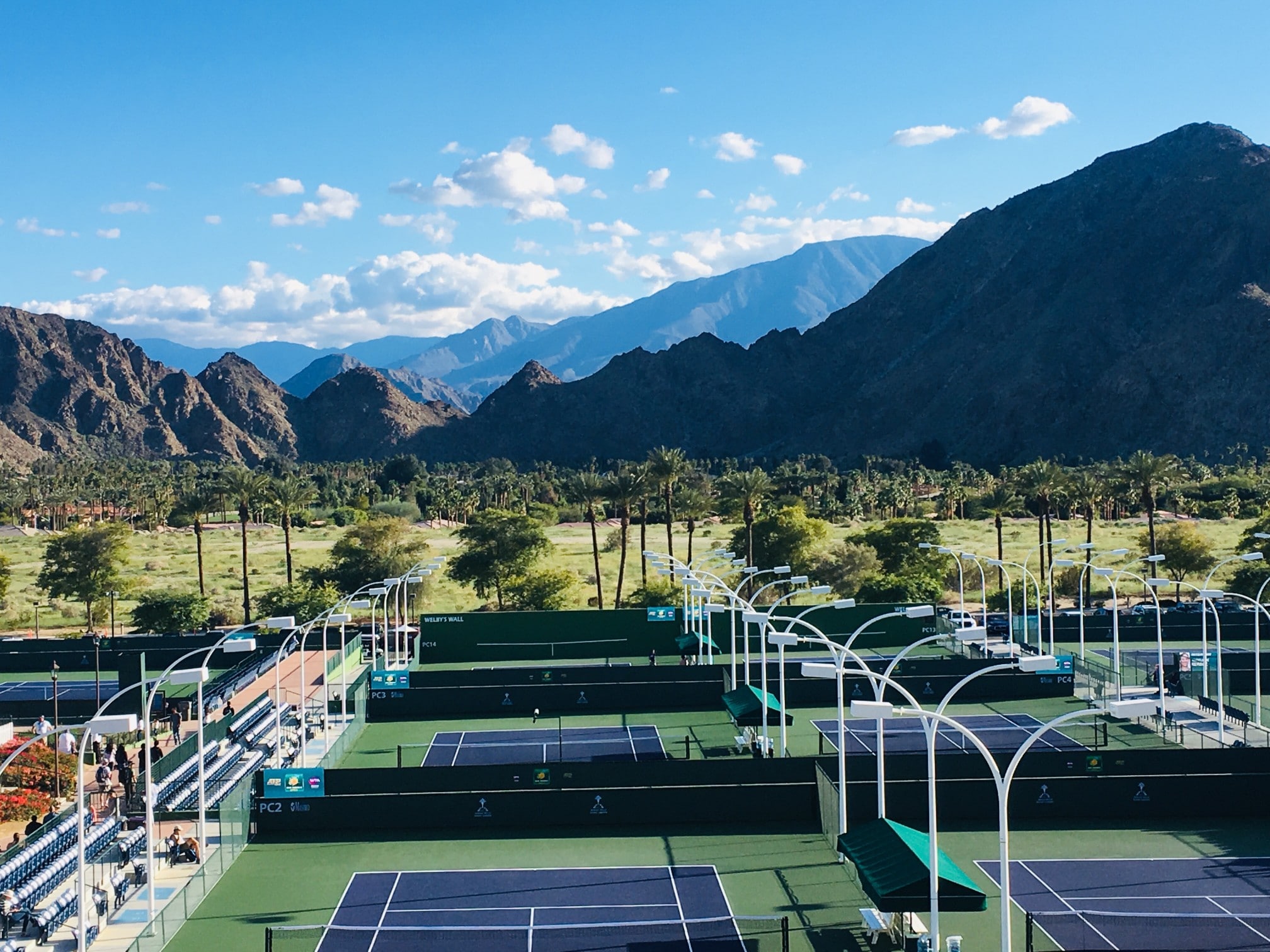 We saw a bit of his practice one day but as the tournament progresses, so do the crowds. Never an autograph. Close a few times but…

First up is Gojowczyk who beat Seppi in the first round. Fed blew through the first set and found the second more competitive. Wearing his Wimbledon whites was a bit of a surprise. 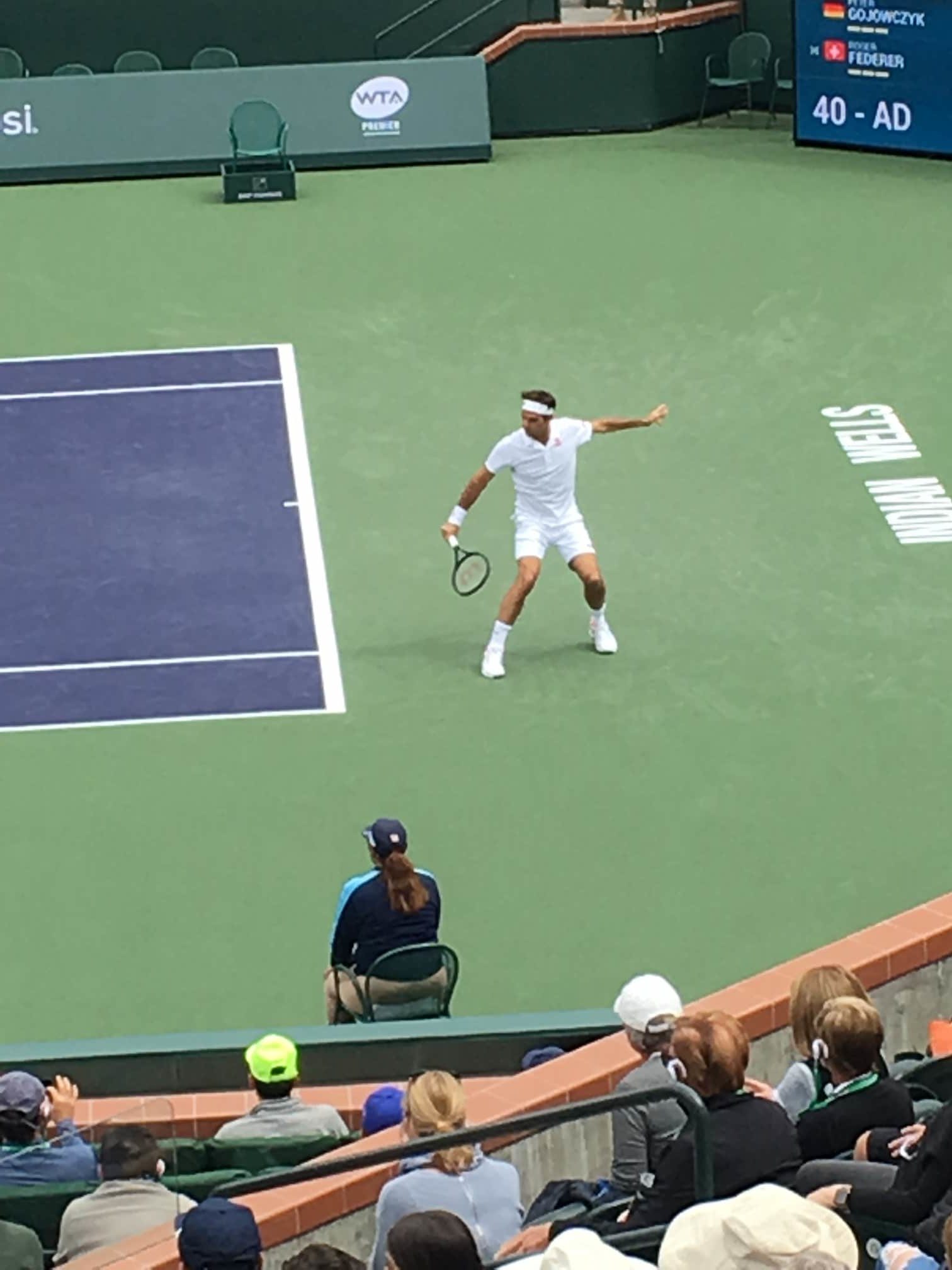 The whole family there, really a fun match to watch up close. Roger never seems to look up at the crowd and he never noticed Sampras in Larry Ellison's “Royal Box”.

Up next was Stan. Roger in blue had full control of the match and it appeared another tough loss for his fellow countryman. Some entertaining points in this match!

A small rant here. Why oh why do the American tournaments have both William sisters (ranked 10 and 43) on centre court for EVERY match they play. Being held hostage to the insanity. Got to go to the outer courts to find the top woman players! 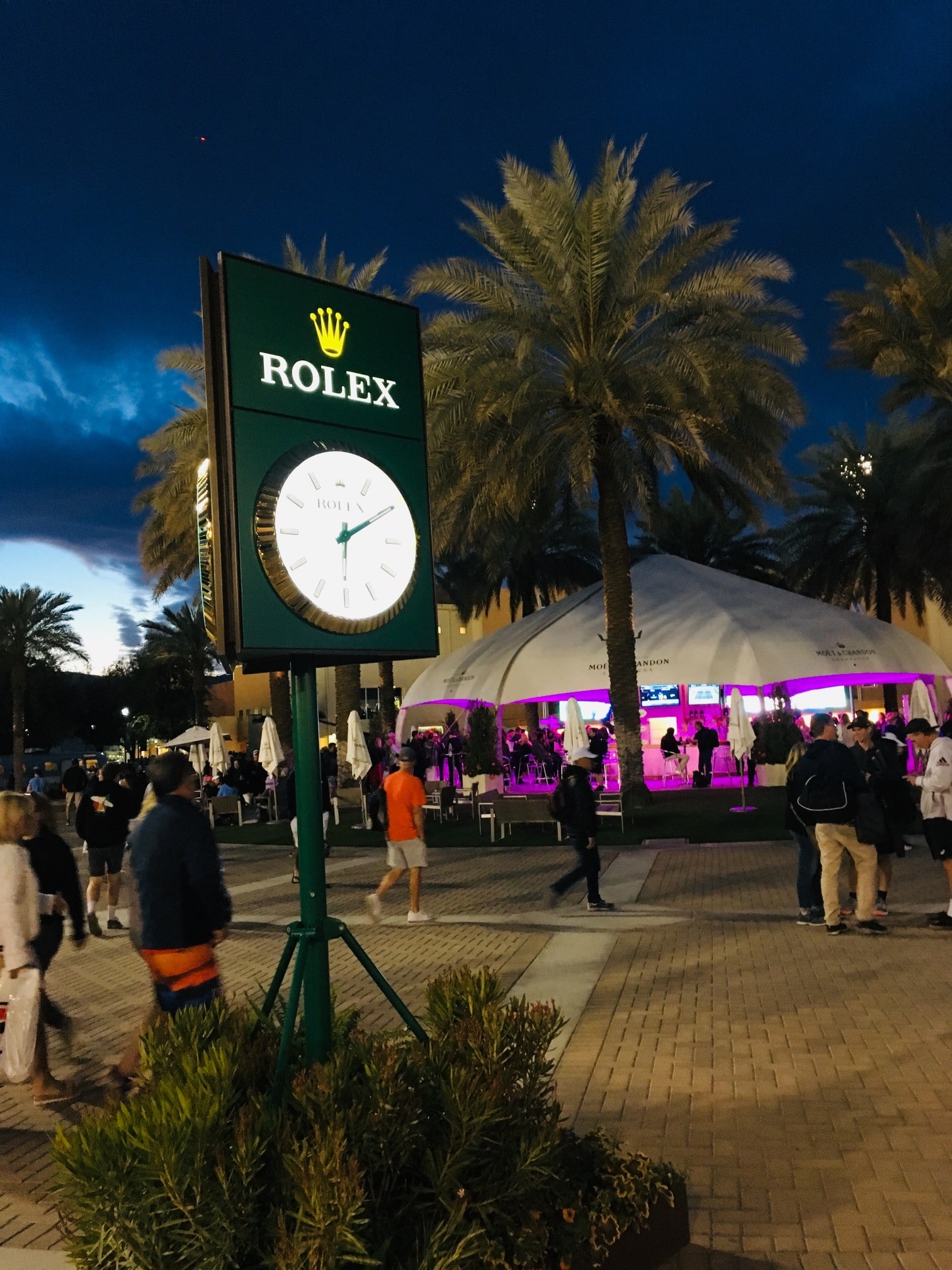 With Tuesday night matches over, it's time to leave. I would say the last time I see Fed live.

Back to the mundane. Our flight leaves at 7 pm the next day. Off to the room to get caught up with the wine.

No rush to leave the next day. We don't have to check out until 1 pm.  Meander our way back to the airport in Palm Springs, early dinner there and on our way.

BUT, I never go on a trip without some sort of drama. Remember the creep who had a microphone and probably a camera in the Airbnb? Well, a little voice in my head said, “Check the flight status“.

But why should I? I'm supposed to receive notification from the airline about delays etc. So, I looked and of course – the flight was cancelled!

Back in the recesses of my mind is something about a downed aircraft.

We hightailed it to the airport. The airline was not taking any phone calls and the ticket counter was empty!

Finally finding someone, we were told they had no authority to help us out at all. All hotel rooms miles around are pretty well booked solid, no cars to rent!

They said, “try United”. But they are unable to book us on a flight. We have to go to their website and do it ourselves. Hello, isn't this a ticket counter in an international airport?

Dropped off the car, checked the bags and made the flight. How lucky was that? Later in the day when it was too late, I received notification that the flight was cancelled. I wonder what happened to everyone else on that flight? All those aircraft grounded and a huge storm in the midwest.

I sat on the plane feeling so fortunate. Another trip to Paradise to see the Maestro and a way home on an older 737.