Earlier this week the US Open announced that they were changing the brand of court surface used at the tournament for the first time in more than 40 years.

The switch sees Flushing Meadows use Laykold hard courts made by Advanced Polymer Technology, replacing the DecoTurf that had been in use since 1978.

This change in New York follows on from Melbourne's change earlier in the year. The Australian Open moved surface supplier to GreenSet Worldwide for 2020 away from California Sports, who they had used since 2008.

With that in mind, what other court surfaces and tennis balls are currently in use on the ATP tour? Are we moving even further towards surface homogenisation and just one or two suppliers dominating? Let's take a look.

What Other Types of Court Surfaces are Used Across the World?

Tennis is probably one of the few games in the world that is played on a variety of surfaces be it grass, clay or hard courts each of those surfaces has smaller subsets made up from different materials like concrete, artificial grass and acrylic.

All court surfaces go through a rigorous testing procedure before they can be approved as an official surface by the ITF, the tests take into consideration friction, energy restitution, topography and consistency.

The types of Tennis Court officially in use across the world are:

How is the Speed of a Tennis Court Surface Measured?

The Court Pace Rating System measures the effect the surface has on the tennis ball which again takes into account friction, which looks at how much the balls velocity changes after it has hit the surface and also vertical restitution which factors in the time between successive bounces.

The CPR test needs various apparatus to be carried out including something to fire out a tennis ball at a set speed such as an air cannon and then a piece of equipment known as a Sestée, pictured above.

I won't go into the complexities of how it works, but basically, the Sestée uses laser technology in its two boxes that can reconstruct the trajectory of the ball and calculate pace. The ball is released from the cannon at 30m/s and at a 16° angle with no spin being imparted on it.

The Sestée can measure the following:

Once the pace of the courts has been measured, they are placed into categories:

What is Court Pace Index? 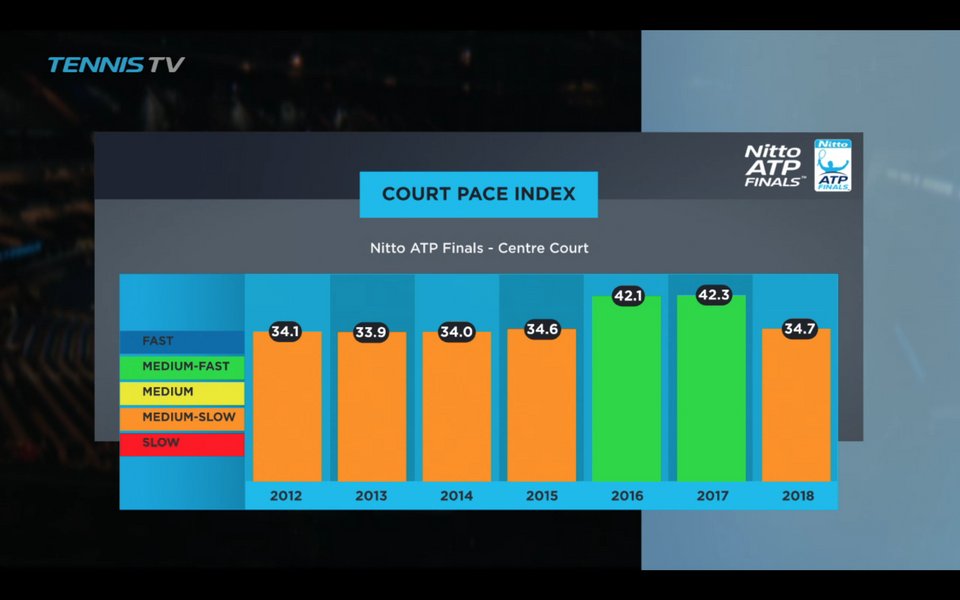 Using their triangulation camera system, they can calculate the speed from in tournament play.

CPI shows the actual speed of the courts as it's measured during real matches on the main show courts throughout the tournament to produce an average over seven days.

CPI is calculated from the following:

Again please remember here CPR = an ITF speed rating given to surfaces in a lab. CPI = court speed calculated from Hawkeye data from the main show courts during a tournament.

The Australian Open is not listed here, but it was rated at 40.

How to Solve the Court Speed Problem 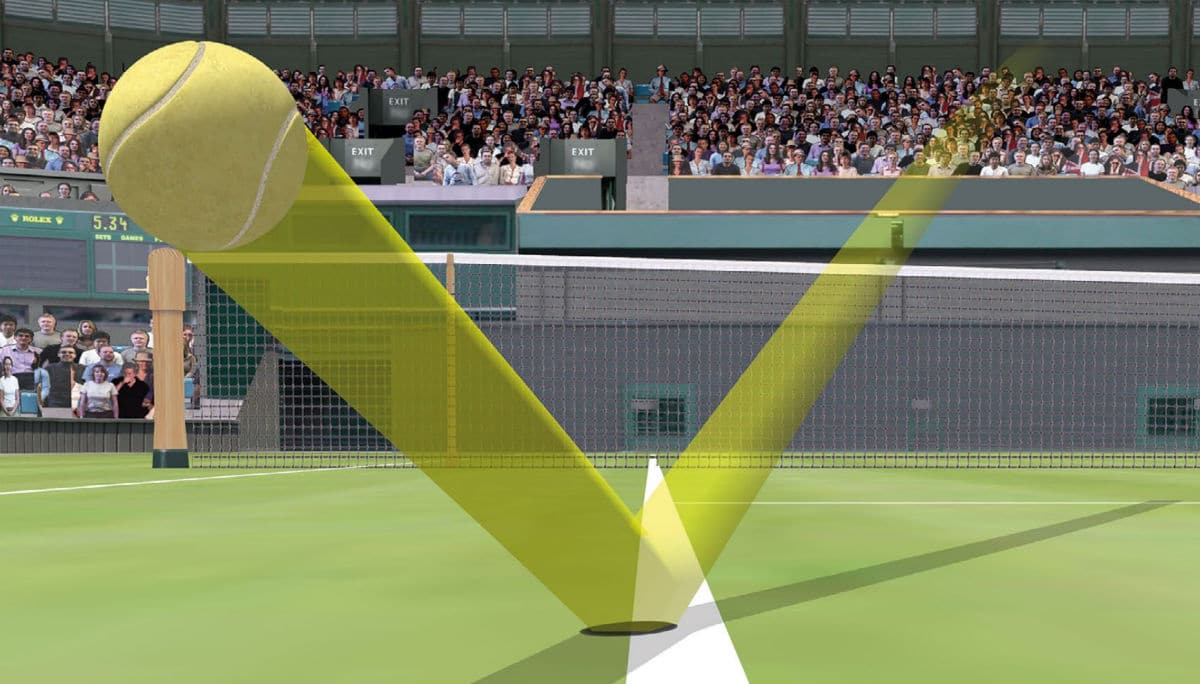 Most players and fans are acutely aware that the surfaces have slowed down over the years. This done for a variety of reasons but the main one is to do with the length of matches and TV money.

The video below from 2013 talks about this at the fifty-second mark:

My opinion is that there needs to be more variety, so players have to adapt. One solution would be that an outside body predetermines the speed of the court at any given tournament and it can't change year on year or at the discretion of the tournament organisers.

So as an example, the US Open has to play at a set speed every year, and it can't drop below or exceed an agreed threshold.

There'd be no more putting more sand into the Laykold mixture to make the surface rougher; it'd be made the same each year for all of the courts at Flushing Meadows. And it'd be a fast hard court, as it should be.

By using that approach, you'd be able to have a wide variety of court speeds on tour. With the right rules in place and planning, it'd be possible to have courts ranging from one end of the spectrum to the other throughout the year.

This allows players to be tested on a variety of surfaces of which some play super quick, some play in-between, some bounce high, some bounce low and some play slowly. The key is variety, and I think you will only get that with some kind of regulation in place.

Some common question I've received after writing several posts about court speed and surfaces over the years.

What is the ITF Court Pace Rating?

The ITF classifies surfaces into one of five categories according to its Court Pace Rating: 1 – Slow, 2 – Medium-slow, 3 – Medium, 4 – Medium-fast, 5 – Fast.

For example, if I create a surface called peRFect Speed Plus and I want to be classified by the ITF, I'll submit details of the surface and supply a sample of it to be tested to receive its court pace rating.

A surface type can have multiple classifications to provide a more extensive offering for buyers. Laykold, for example, has the Cushion Plus surface available in Category 2, Category 3 and Category 4.

You can see an example of a surface classification certificate here.

How Do Tournaments Determine Court Speed?

Tournaments will first seek a court supplier to lay the courts for their tournament. For example, the US Open has chosen a company called Advanced Polymer Technology for 2020.

The choice is usually determined by the surfaces the supplier produces or has access to. In the case of the US Open, Laykold is the surface of choice.

From there it's a case of the tournament and the supplier liaising to produce a surface that plays at the speed a tournament wants.

A good example here is Miami, which like the US Open is played on the Laykold Cushion Plus System. They wanted a surface that had a similar speed to other ITF 3 Medium Pace-Rating tournaments.

The supplier then customises its product mixture and installation to tweak the ball speed to get the desired result. This is done by changing the underlying layers of court and the topcoat, which has sand particles in which impact ball speed.

The key takeaway here is that surfaces can be altered significantly in speed and they do not just come as an out of the box solution that plays according to their ITF rating.

Are All Clay Courts The Same?

All clay courts at tour-level are mostly the same as they're produced from red brick dust. However the way they're laid, the substrate and the underlying surface can differ.

For example, the French Open has the following composition:

Not every surface uses this ballast, and not every court is laid in the same area. Some areas have better natural drainage, different soil, no need for textile sheets to prevent weed growth etc. which all affect how a court plays.

At the recreational level, clay courts are laid in a variety of ways, usually to reduce maintenance costs. For example, in Europe, the Red Plus system is prevalent, which uses multiple layers of filled carpet offering the same playing properties as a traditional clay court.

Why Do Tournaments Use Different Tennis Balls?

The reason tournaments use different balls is purely down to sponsorship reasons. Tournaments are free to strike deals with whichever suppliers they wish.

Although all balls used on tour have to have a level of uniformity, and consistency in performance. They do play differently; some are lighter, some have different felt, some fluff up more.

This changes their speed through the air, how much moisture they absorb, their durability, and how they react with the strings. Several players believe changing balls between tournaments can lead to injury.

How Often Do Tournaments Change Surfaces and Balls?

Most contracts for surfaces tend to run at around the four or 5-year mark and are renewed in most cases. Decoturf, for example, was used at the US Open for 41 years before they switched.

Balls do change slightly more frequently, and this is usually because of player feedback and tournaments often change when the minimum contract term is over.

Take the French Open ball which was supplied by Dunlop until 2011, it then changed to Babolat which wasn't too well received from the players but they stuck with it. However, Wilson is the new provider of Roland Garros tennis balls from 2020 onwards.

On the flip side, Slazenger has been the supplier of the Wimbledon ball since 1902, probably the longest partnership deal in the history of any sport.

Got any questions or points of view about court surfaces, the speed of the courts or the balls in use? Let me know in the comments.

Serbs Him Right, No Djokes (Part 2)

The ATP Tour Is Back!