Team Europe lifted the Laver Cup for a third straight year with a 13-11 victory over Team World at the Palexpo Arena in Geneva.

After Team World had got off to the perfect start with a victory in the doubles and Fritz had defeated Thiem it was up to Federer and Zverev to save the day. Roger kept his end of the bargain with a rock-solid performance against Isner before Zverev produced some big-time tennis under pressure to come through a ten-point deciding tiebreaker against Milos Raonic to grab the three necessary points to seal the tie!

Let's take a look at how the final day panned out. 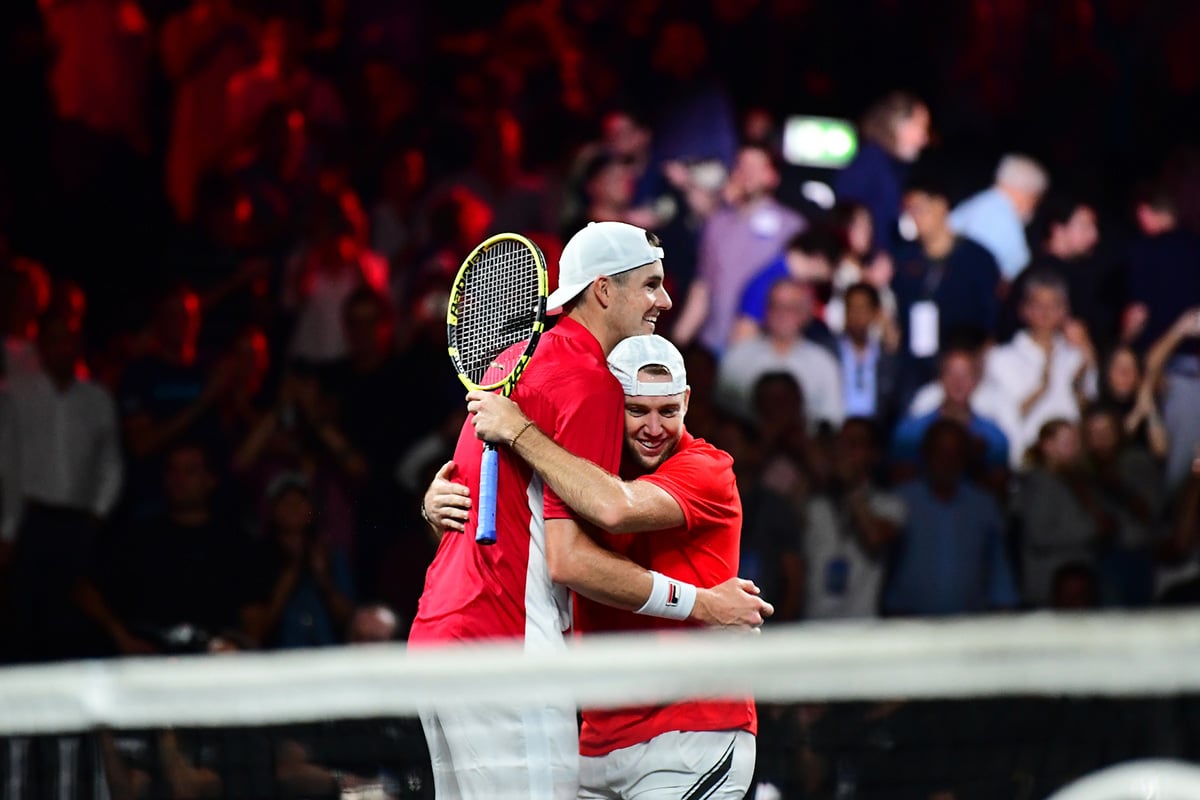 A solid start from Fedsipas on serve but Isner held in no time and Tstisipas was broken to fifteen in game three after a loose service game.

Team Europe fashioned a break back point on the Sock serve but Roger tried to do too much at net. A second chance quickly presented itself and the pair got back on level terms.

A quick Federer hold got Europe and the pair then made deuce on the Isner serve but couldn't find a breakpoint chance.

The score quickly moved to 5-5 and after Tsitsipas held for 6-5 Team Europe created 0-30 on Sock's serve. Team World recovered to make 40-30 but two points in a row from Europe gave them a set point. Sock saved it but then double-faulted to give Tsitsipas another chance on the return. Again it was saved but a second double fault gave Europe a third bite of the cherry and they converted it after Tsitsipas hit a stellar backhand return and Fed put away the volley to take the first set.

Into set two and Team World broke Tsitsipas in game three after Isner came up with a slick reaction volley to lead 2-1. Like the first set, Europe had an immediate chance to break back but Tsitsipas netted a makeable return and World held to lead 3-1. That one break proved the difference and although Europe had a chance to level in game ten, World served out a multi deuce game to force a 10 point tiebreaker.

Into the tie break and Team Europe got up the early mini-break 2-0 but World recovered it. Europe then needed Tsitsipas to come up with a ridiculous get from a smash to keep in front for 3-2.

At 3-3, Isner hesitated and a ball crept over the net leaving him bamboozled, however, a Tsitsipas shank got World level again and a clean Isner winner on the return put them up 5-4.

Isner's serve put them up 7-4 but Roger hit a line finding ace then a volley winner to keep within one point at 6-7.

At 8-6, Federer came up with a solid return and then fired a forehand winner to recover the break but a timid Tsitsipas second serve and an early move from Roger allowed Sock plenty of time to fire a winner into the open court. Europe held the next to save match point but Isner's serve sealed it 10-8. 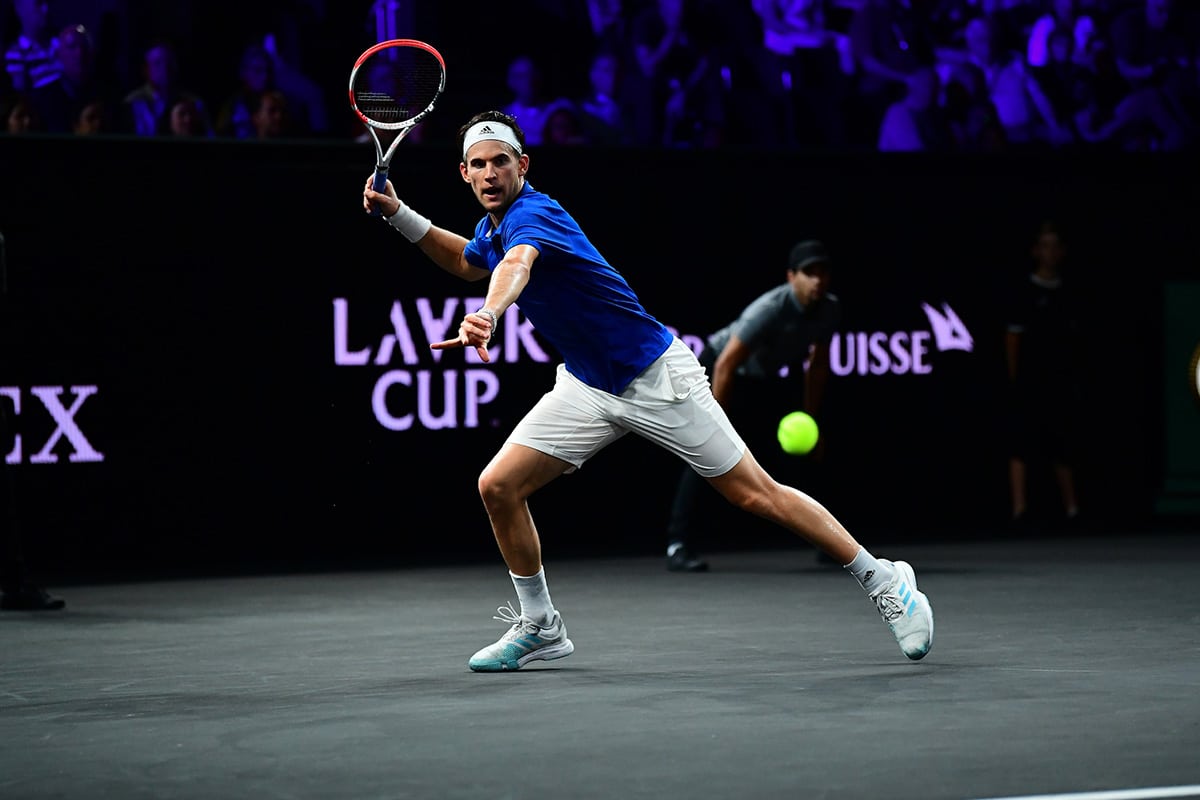 Thiem fashioned a breakpoint in the opening game, but Fritz held for 1-0.  From there Thiem was the better player in the set and had three breakpoints at 5-5 but couldn't convert. He then had to save four set points at 5-6 but on the fifth Fritz dispatched a second serve to take the opening set.

Into set two and Thiem found himself in big trouble at 1-2, 0-40 but he won five straight points to level. The serve then dominated with both guys holding comfortably. The set went into a tiebreaker and Thiem went nuclear on the forehand to run away with it 7-3.

That momentum got him a mini-break in the 10 point decider for 2-0 but Fritz won 6 points in a row to forge a 6-2 lead as Thiem's backhand looked shaky. The American extended that to 9-3 and eventually prevailed 10-5. 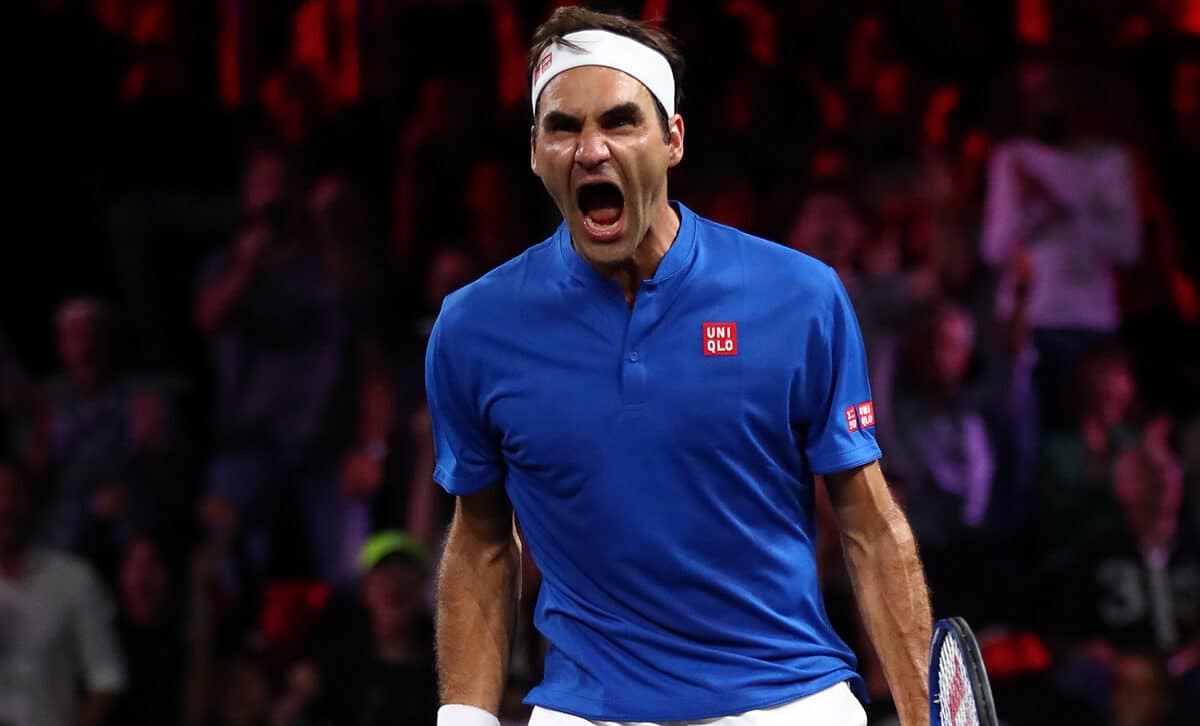 The Swiss went one better in game five, creating 0-40 and converting at 15-40 with a forehand pass to lead 3-2. Roger consolidated to love and was giving Isner a working over from the baseline.

That was quickly 5-3 and Roger went on to serve out the set in style to take it 6-4 in just over an hour.

Into set two and Isner played a couple of decent service games to get himself 2-1 ahead. The serving show from both continued until 3-3 but in game seven Roger create a chance at 30-40. Isner erased it with a second serve ace out wide, The Swiss had another look after a slick backhand pass but again Isner came up with the goods on serve before eventually holding for 4-3.

A 0-30 window came Rogers way in game nine but Isner won four points in a row to hold for 5-4. Another exchange of holds followed but in game twelve Federer had to save a set point with some clutch play.

That meant a tie break to decide the set. With Isner rock solid on serve it was looking dangerous but at 4-3 Roger came up with a forehand return on the stretch to get up a mini-break, another slick return got him in the point and an Isner forehand wide off a net cord gave Fed two match points which he sealed with a big serve. Boom! 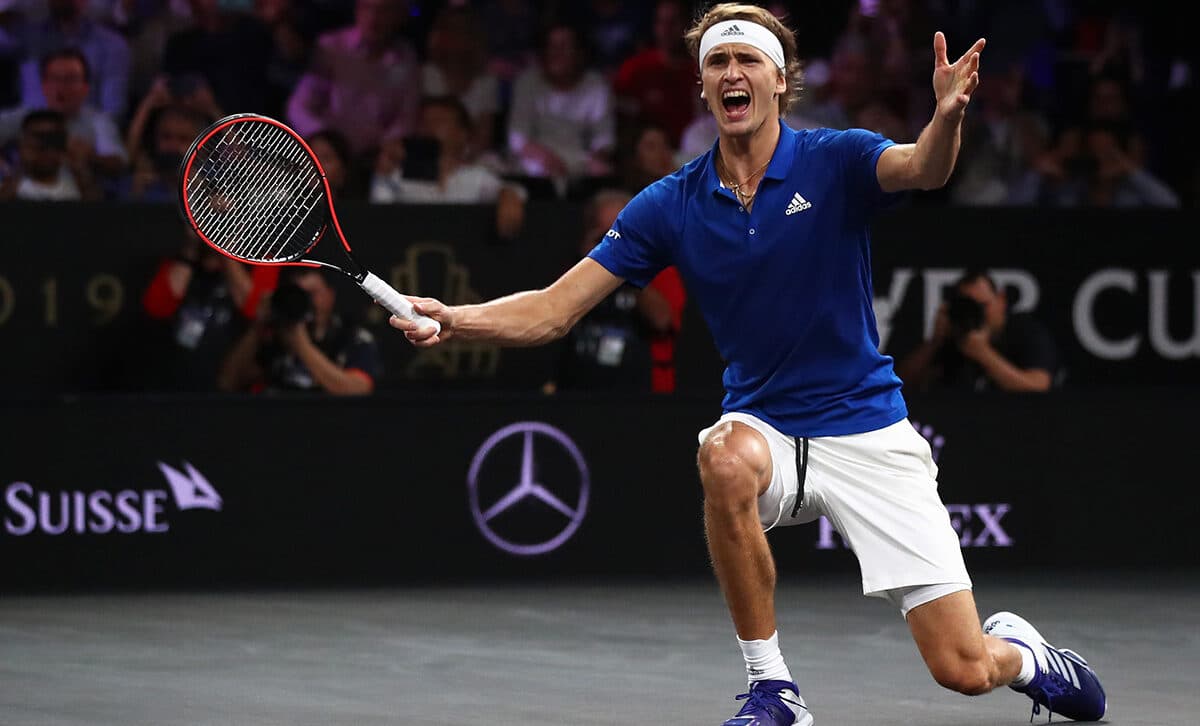 Close in the opening stages and Zverev looked to be getting down on himself but he came up with a solid return game to break for 4-3. Served it out easily 6-4.

The second set looked to be following a similar pattern but in game six Zverev lost focus when he was distracted by Fritz taking his seat on the Team World bench and was broken from 30-0 up. Raonic consolidated for 5-2.

Sascha managed to regain his focus and at 3-5 fashioned two breakpoints as Raonic looked tight. Two huge serves from Raonic saved them and he staved off two more to force a deciding 10 point tie break.

Into the breaker and it was Zverev who was mentally better, picking off some timid Raonic approach shots to get up a mini-break and moving into a 7-4 lead. That was soon 9-4 thanks to a backhand up the line and he sealed it in style, falling onto his back before being mobbed by the rest of Team Europe in celebration.

Thoughts on the Final Day of the Laver Cup 2019 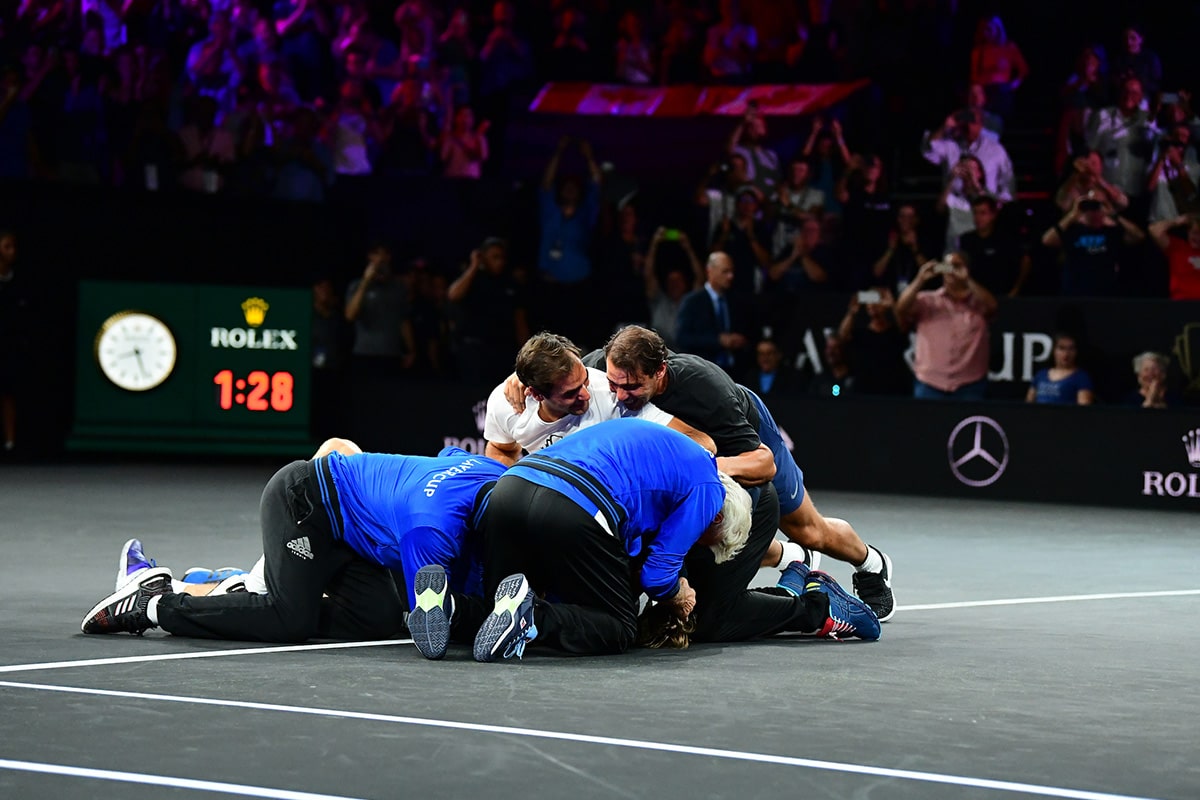 First up was the doubles and it was a very tight match. I thought Roger and Stefanos were a much more natural pairing than Tsitsipas & Nadal yesterday evening but the problem was neither of them played well at the same time. Both guys had great moments but when one guy was free-flowing, the other wasn't.

Tsitsipas was the better player of the two for the most part in the rallies but his Achilles heel is the return. He takes huge swings when just blocking the ball is a better choice. That cost them in the tie break as Roger was rock solid but Stefanos shanked 3 or 4 balls with one hitting the ceiling.

In the first singles, I thought Thiem had an on/off day. He looked to be dealing with Fritz easily in the first few games but messed up to drop the set. In the second he dug deep and played a great tiebreaker to level but his level dropped in the 10 point decider as Fritz played freely unlike against Tsitsipas. 6 points in a row doing the damage as Thiem was shell shocked.

The other thing to note was the crowd were a bit flat given the swaps and confusion about what was going on with Thiem in for Nadal and then Fritz in for Kyrgios which gave it a bit of a dead atmosphere but when they'd settled back into it was soon back to normal levels.

Onto Federer's match and it was a stellar display in a match he needed to win to keep the Laver Cup alive. I thought he served great and gave Isner a working over from the baseline. Those easy holds made it feel like Isner was the one always serving and John didn't seem like he was moving that well to ever get back into rallies when he fell behind.

Federer's win meant Zverev had to win the final match of the day and he produced a clutch performance, overcoming a second set blip and showing he was the better man under pressure. Whereas Raonic, who is arguably more experienced, made some half-hearted approaches into Zverev's stronger backhand wing which burned him. I was very impressed with Sascha's mental game and it seems like he's a man for the moment in these team events and the Fedal pep talk got the best out of him. 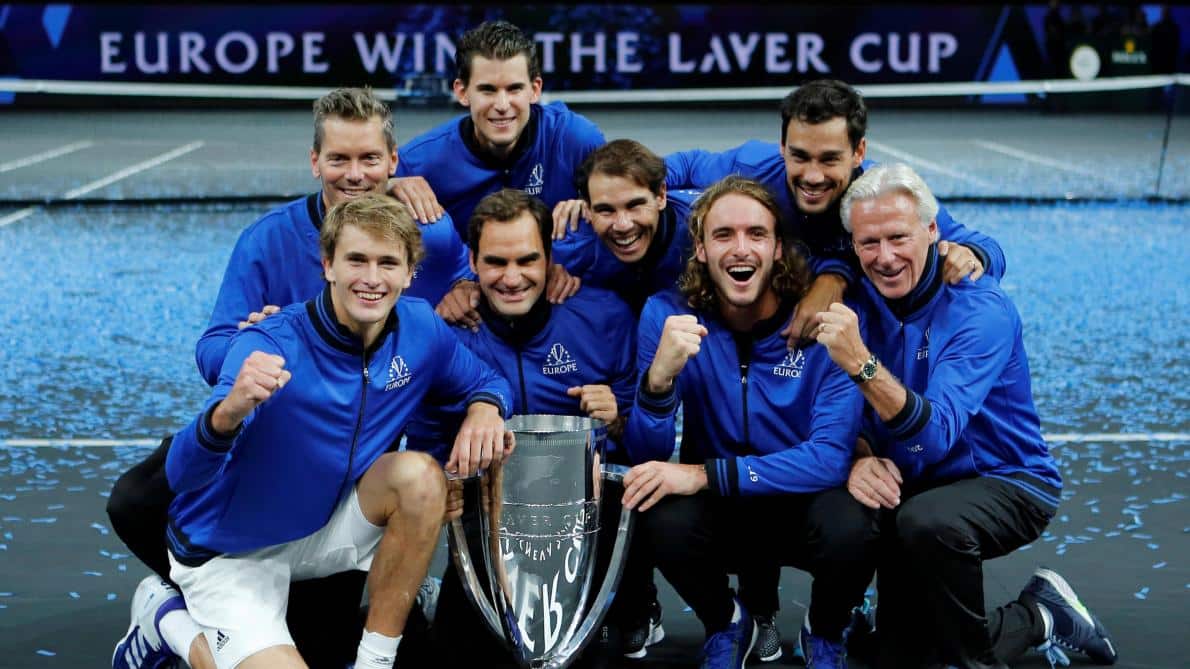 Another fantastic weekend and the Laver Cup has so far managed to better itself every year. Prague was a fantastic start, Chicago took it up a notch but then Geneva went one better. The crowd were crazily involved all weekend and the tennis on offer was awesome. So another unforgettable weekend for anyone who watched and even more so for those who attended I'm sure.

I'm a big fan of how it's all put together, for the fans watching live they got to watch tennis in such a great atmosphere and experience 72 hours of quality tennis. The decibel level when Roger hit that stretch volley against Kyrgios was insane. The fans watching at home also get something exclusive too; the team bench cameras give you a completely different look at things and mid-match interviews are very interesting.

The highlight for me was the involvement and camaraderie between all the players. Nadal was top quality on the bench giving great advice, Fed was as animated as ever and as fans, we get to see a different side to the sport.  an insight into the mindset of the players and we are able to listen to some of their thoughts out loud in the team environment. Such a good look for tennis!

Not that it's in any doubt, but I thought Mark Petchey put it best “if you don't think the Laver Cup is good for tennis, take your vial of denial and have a glass of champagne.” 👍

What did you guys think of the third edition of the Laver Cup? Let me know in the comments.