Federer’s accomplishments on the court have been a celebrated and much-admired phenomenon. Fans have been treated to various milestones; the first male player to reach twenty grand slams, the oldest to hold the number one ranking, and an all-time Wimbledon record with eight titles.

But off the court, Federer’s charity work is often overlooked. Nevertheless, it is of great significance. The Roger Federer Foundation has transformed the lives and livelihoods of children and young people around the world.

How did Federer go from a professional tennis player to a major sporting philanthropist? How else does he raise money?  What is the financial bedrock that underpins his ability to donate? And how exactly is the money spent? 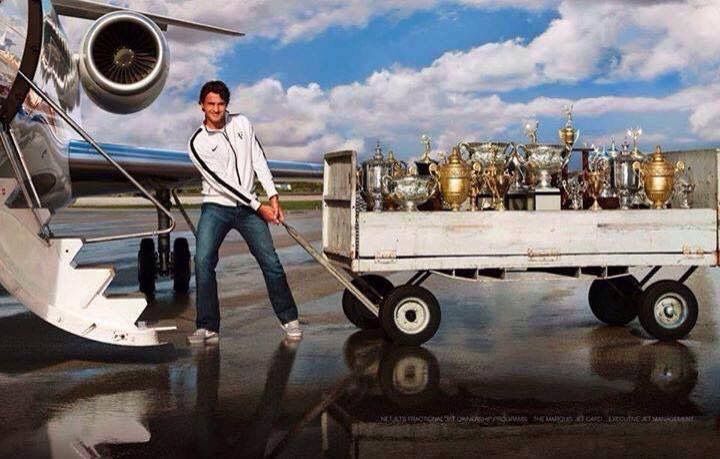 From turning pro in 1998 until the end of the 2002 season, Federer earned approximately $3.7 million in prize money. 2003 would prove a financial turning point, earning just over $4 million in that season alone.

With a massive boost in revenue, and his Nike sponsorship deal ongoing, 2003 seemed the right time to launch the Roger Federer Foundation with enough capital to back it successfully.

The foundation works in Southern Africa, including South Africa, where his mother is from, and his home nation Switzerland. This wasn’t a general attempt at charitable donation, but a genuine effort to help people Federer felt culturally tied to and cared for.

Recently, Federer’s supplies of capital potentially available for charity have not diminished.

After his deal with Nike ended in 2018, Federer signed a lucrative $300 million contract with Uniqlo, which would pay him $30 million each year for ten years, even if Federer decided to retire from the sport. This was a significant increase from Nike’s payout of around $10 million each year.

The further advantage of the Uniqlo deal was that they did not make tennis shoes. Federer could pursue an additional arrangement with Swiss running shoe brand On. With Federer holding a 3% share of a company worth an estimated market value of $7.3 billion, he has significant resources to draw upon for continued donations and projects well into the future. 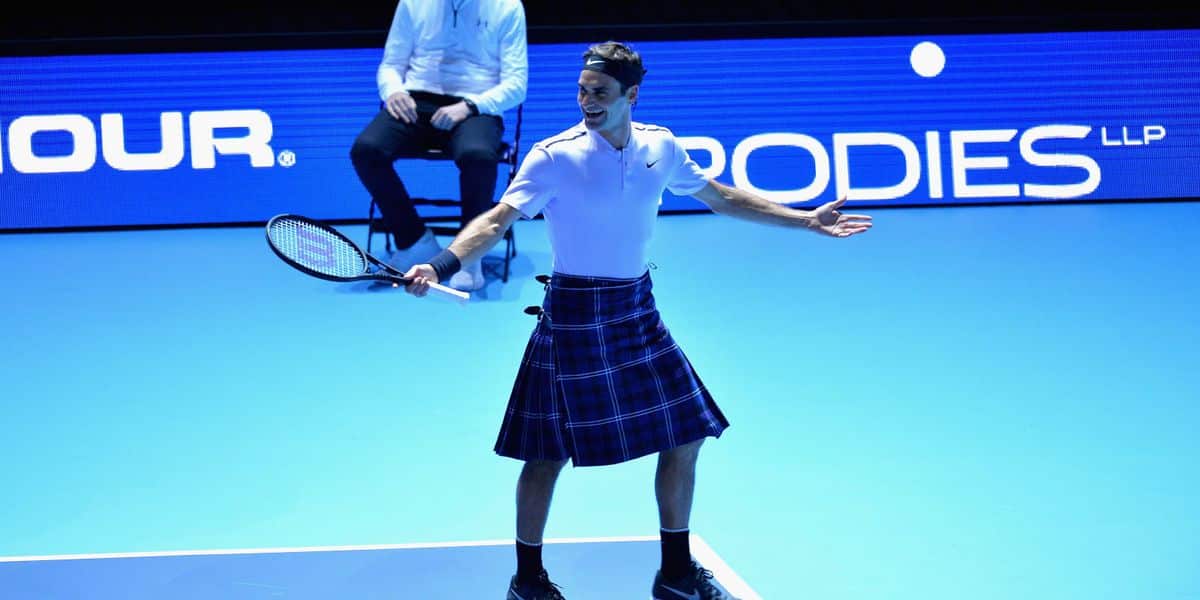 The Match in Africa, (previously for Africa), is the name of a charity tennis fixture specifically held to raise money for the foundation through ticket sales. Federer would use his broad appeal and tennis skill to put on a fun, and relaxed tennis show that thousands would pay to see.

With the first event being held in 2010, he also enlisted the help of a friend and rival Rafael Nadal to draw further interest. The initial match would be held in Zurich, while the second match would travel to Madrid to raise money for Nadal’s foundation.

The 2010 event was able to raise $3.8 million. Federer reached out across the tour for other friends and tennis pros to help him, with Stan Wawrinka, Andy Murray and John Isner making appearances in later years.

Roger Federer vs Murray, The Match for Africa 2017

The Africa matches also served as a platform to attract help from outside the tennis world. Credit Suisse, a sponsor of the event and Federer himself since 2010, began donating $1 million each year to the foundation and became the facilitating bank to process donation transactions.

Moreover, with Seattle being the host city for the 2017 event, Federer and his agent Tony Godsick met with Bill Gates (a serious Federer fan) to discuss his participation in tennis itself.

Meeting Gates was crucial, as Federer was able to ask questions and learn from Gates’s experience of running his own $30 billion charitable venture.

Federer memorabilia is sold worldwide on the foundation website itself, with profits going back into charitable work.

In the summer of 2021, Federer auctioned some personal items, with the help of Christie’s auction house.

The items included his racquets from the 2007 Wimbledon and 2009 Roland Garros finals and his shoes from the 2005 Wimbledon final. The total sales from the live and online auctions reached $3.4 million.

Outside of the foundation, Federer has been active in supporting other projects. At the time of the 2020 Australian Open, the country was devastated by bushfires.

In what became an Australian Open classic, Federer along with a host of other ATP and WTA stars participated in the Rally for Relief.

After pledging $200 for every ace until the end of the summer, others quickly followed to raise money.  Federer and Nadal would go on to donate a combined $182,000.

The centerpiece was Federer vs Kyrgios battling for a set, encouraging viewers of the Open to donate themselves.

Where Does the Money Go? 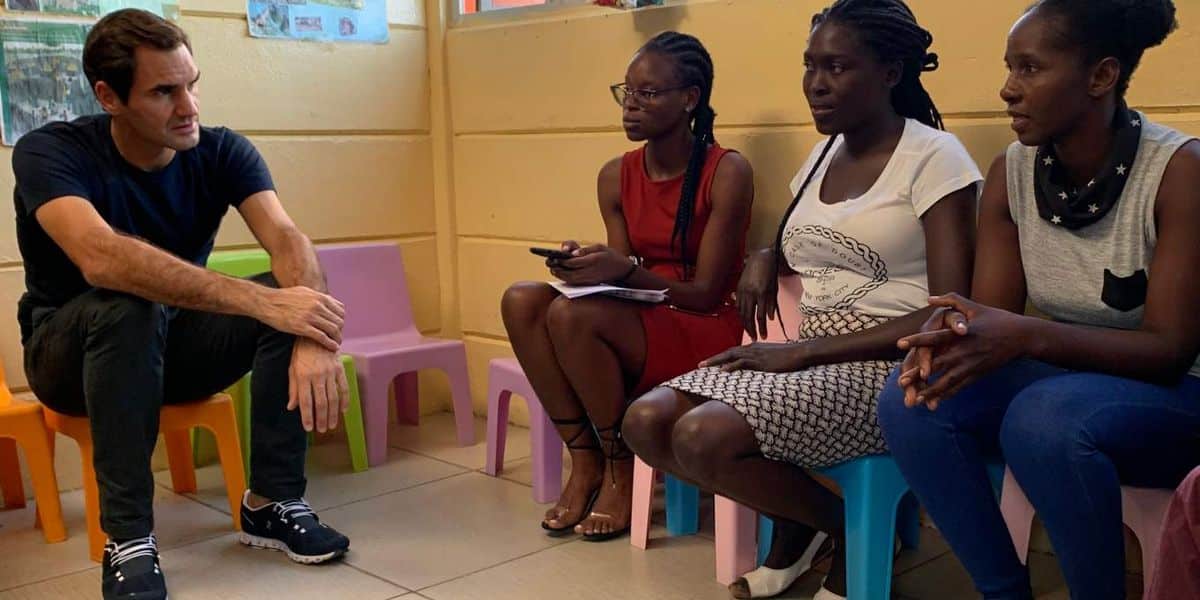 The aims of the foundation are precise. They operate in Southern Africa and Switzerland and are focused on children and young people. Their particular interest is alleviating poverty through improving access to early education.

The foundation takes a long-term approach and works closely with organisations on the ground:

All activities are realised and implemented by local non-governmental authorities in close collaboration with the local communities. In order to evaluate our impact, we measure the changes in the levels of supported children's performance, rate repetitions, absences, or enrolment rates. The Roger Federer Foundation

In Switzerland, the foundation identifies the gap between the cost of education and the level of state aid towards education as the critical issue.

Through working with other Swiss charities, the foundation guides and offers information to parents in lower-income households to help prepare their children for kindergarten.

In South Africa, one programme aims to monitor children’s language, cognitive and numeracy skills so that schools can tailor their approach to the students’ needs.

In Zambia, the foundation has put technology to good use and developed an offline tablet – the Early Learning Kiosk – which provides knowledge and training for unqualified teachers.

Earlier in January 2021, Federer visited an early learning centre in Namibia that he supports. In playing alongside the children and helping them learn in class, Federer takes a hands-on approach to ensure his money has the most significant impact possible.

Federer’s spending power available for charity continues to be substantial. After he leaves the tour Federer will certainly have the resources to continue what seems to be a great passion. Charity and philanthropy have been rewarding spinoffs from an incredible career, as the foundation continues to help children achieve the best in their early education.