A man to meet if you want to get beat. He’s back, it’s amazing, ain’t no jive, Fed comes alive. With moves and groves and dance and prance, you fools better recognise who’s the man.

Roger Federer is back on the ATP Tour after a 405-day absence, and he returned in style, coming through a tricky three-setter with his Dubai practice partner Dan Evans to win 7-6(8), 3-6, 7-5.

The Swiss showcased all his fighting spirit and, for periods, looked as though he'd never been away, particularly on his first serve in the early stages which provided him with ample free points.

Evans, who won his maiden ATP title back in January, has been more than a match for Federer in practice over recent weeks, and he dug deep in the second and third sets to take it to the wire. Still, Roger prevailed, sealing his second match point with a backhand down the line winner. 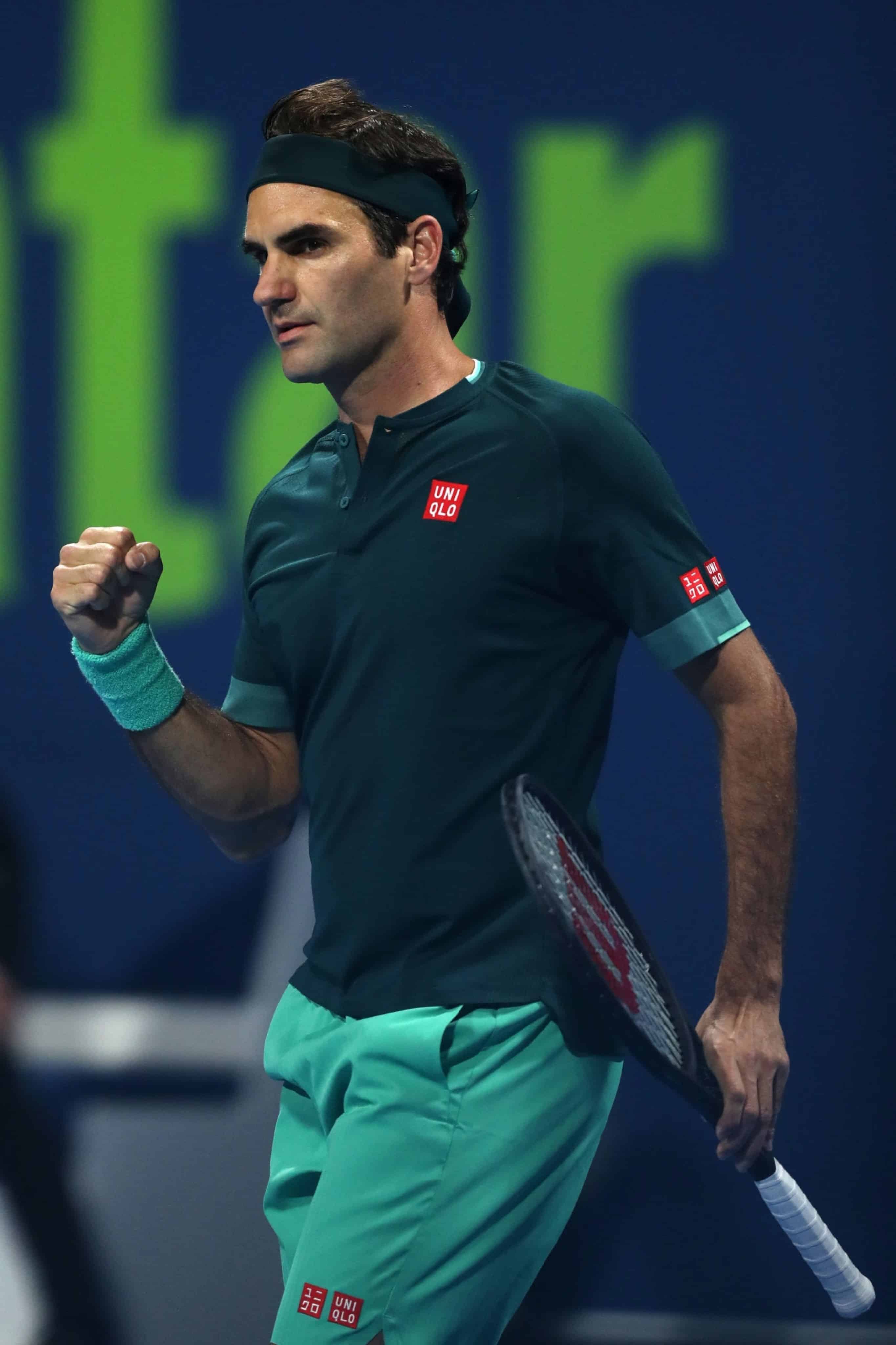 After some clarification around how long the shot clock was and how the towels work, Federer won the toss and elected to serve.

He kicked things off with a comfortable hold to fifteen for 1-0, just like the old days.

Evans levelled to thirty, but Federer improved on his first game with a love hold for 2-1.

Another hold to thirty put Evans level, but another love service hold, featuring 2 aces put Federer in front at 3-2.

The serve continued to dominate with both players exchanging back to back holds, and aside from a point that ended with a Federer half volley pick up at the net +  overhead, the points were kept short.

However, at 4-4, a rare look at a second serve allowed Evans to establish himself in the point, and he took advantage of a short ball to make thirty-all.

A slick backhand winner up the line set up a breakpoint, but Federer saved it with an inside in + inside out forehand combo. The Swiss avoided any more danger to hold for 5-4.

Evans quickly forced Federer to serve again with two aces en route to 5-5, but Federer fired down his third love hold of the set to guarantee himself at least a tie break.

Evans replied in kind, and the set concluded in a tie break. Federer got himself in front 2-0 after the wind pushed an Evans backhand long, but the Brit turned the tables to win 4 straight points for 4-2.

A backhand pass put recouped the Federer mini-break as Evans could only net the stretch volley before two solid serves put Federer up 5-4.

Under scoreboard pressure, Federer used the chip charge to try force the error, but Evans had worked the point well with his low slice and picked off the net rushing Federer with a forehand pass.

Evans held the next point to give himself set point, but Federer used the serve forehand combo to lead 7-6.

A second serve ace after Federer guessed wrong allowed Evans to save set point, but a Federer cross-court forehand on the run landed on the line to produce a set point on his own serve.

A looping Evans return looked set to be put away, but Federer didn't get there quick enough yet still decided to try the drive volley despite the ball being at shoe height. 😂

A wry smile appeared on the face of the Swiss, but he was soon back to business, opting again to use the drive volley, this time successfully to lead 9-8.

Evans came in behind a solid forehand down another set point, but Federer got there with plenty of time, allowing him to rip a backhand cross-court winner.

Into set two and Federer fashioned his first break point of the encounter, winning four straight points from 0-40, but Evans held to lead 1-0.

A love hold got Roger level at 1-1, and he was again able to fashion deuce on the Evans serve, but the Brit held for 2-1.

Evans then broke through for the first time in the match, aided by a classic backhand shank on break point to lead 3-1.

Federer could fashion an immediate breakpoint back, but Evans saved it to lead 4-1.

Another close return game saw Federer make deuce in game seven, but Evans held firm to lead 5-2 and maintained his advantage to take the set 6-3.

Federer kicked off set three with some authoritative forehands to hold for 1-0. Evans was soon level at 1-1.

That trend continued until game six when Roger fashioned a couple of deuce points, but Evans held off the pressure with some nice serving to level at 3-3.

In game seven, a couple of loose points gave Evans a 0-30 window, and he was able to set up a breakpoint at 30-40 when Federer put too much on a backhand.

Federer saved it with an ace and then fended off a second with a well-executed dropper before pulling out the hold to lead 4-3.

At 30-30 in game eight, Federer came in but didn't quite do enough with the volley, and Evans produced a stylish pass up the line en route to holding.

A hold to fifteen gave Roger a 5-4 lead, and he then fashioned a match point after Evans missed a fairly easy volley. A serve and volley switch up saved it from Evans, and he went onto hold for 5-5.

Game eleven started with a slick improvised backhand drive volley from Federer, and despite a couple of shanks, he held to lead 6-5.

A double fault didn't give Evans the start he wanted when serving to stay in the match, and with a visibly tired Federer looking to throw caution to the wind, he drew a couple of errors from Evans to set up two match points, converting the first of them with a backhand winner down the line.

It feels good to be back, I am happy to be standing here regardless of whether I won or lost but obviously winning feels better.

It was a good match and Dan played a good match, he has been a wonderful training partner with me over the last two weeks – we have played more than 20 sets so it went on and on and it was great fun.

I was more focused on being tired that winning the point so I felt if I was going to go out I am going to go out swinging but I am incredibly happy I played a really good match, served really well and nice to finish with a backhand down the line on a match point.

It's been a long and tough road, but I have enjoyed it, it has been a huge challenge at my age but I have a wonderful team around me that have supported me throughout and it was worth it. Federer in his on court interview

Well, folks, Fed is back, and it was a typical rollercoaster ride.

Some fans were desperate for a win, some just happy if he got a few games, some hoped it would at least be competitive, and others wanted Roger to be able to test his legs in a tough physical match. Well, in true Fed style, he delivered all of those requests while putting in another great performance.

From his reaction on the court, I think he probably surprised himself and the level he played at. Of course, there's a level of tennis he can always expect even if he was hitting the ball with a stick of rhubarb, but to beat a top thirty opponent after not playing for over a year was a great effort.

I thought he served great and held up pretty well over the duration. There is no way you can replicate a competitive tour match in practice sets as there is physical fatigue, mental fatigue, and the adrenaline is pumping, which is also draining. You don't get that in practice.

I read a book recently by a late WWII Veteran who on D-Day said that after a short firefight, he just fell asleep instantly while kneeling in a fox hole. The adrenaline had gone after the battle, and he was out like a light. His friend prodded him with an M1 20 seconds later, and he woke up feeling like he'd slept for 10 hours. So I imagine Federer will sleep like a baby tonight.

Other than that not much to say; there is no point in micro analysing his game this early and asking questions like if he was half a step slower than before, did he move well to his forehand etc. as the main thing was stepping on the court, the huge bonus was winning.

Evans will be a bit disappointed not to beat a rusty veteran, but he played well, and it was only really the last game where things didn't quite work out. That serve and volley to save a match point in the previous game was quality, and had he managed to force a tie break; he clearly had more energy in his legs. 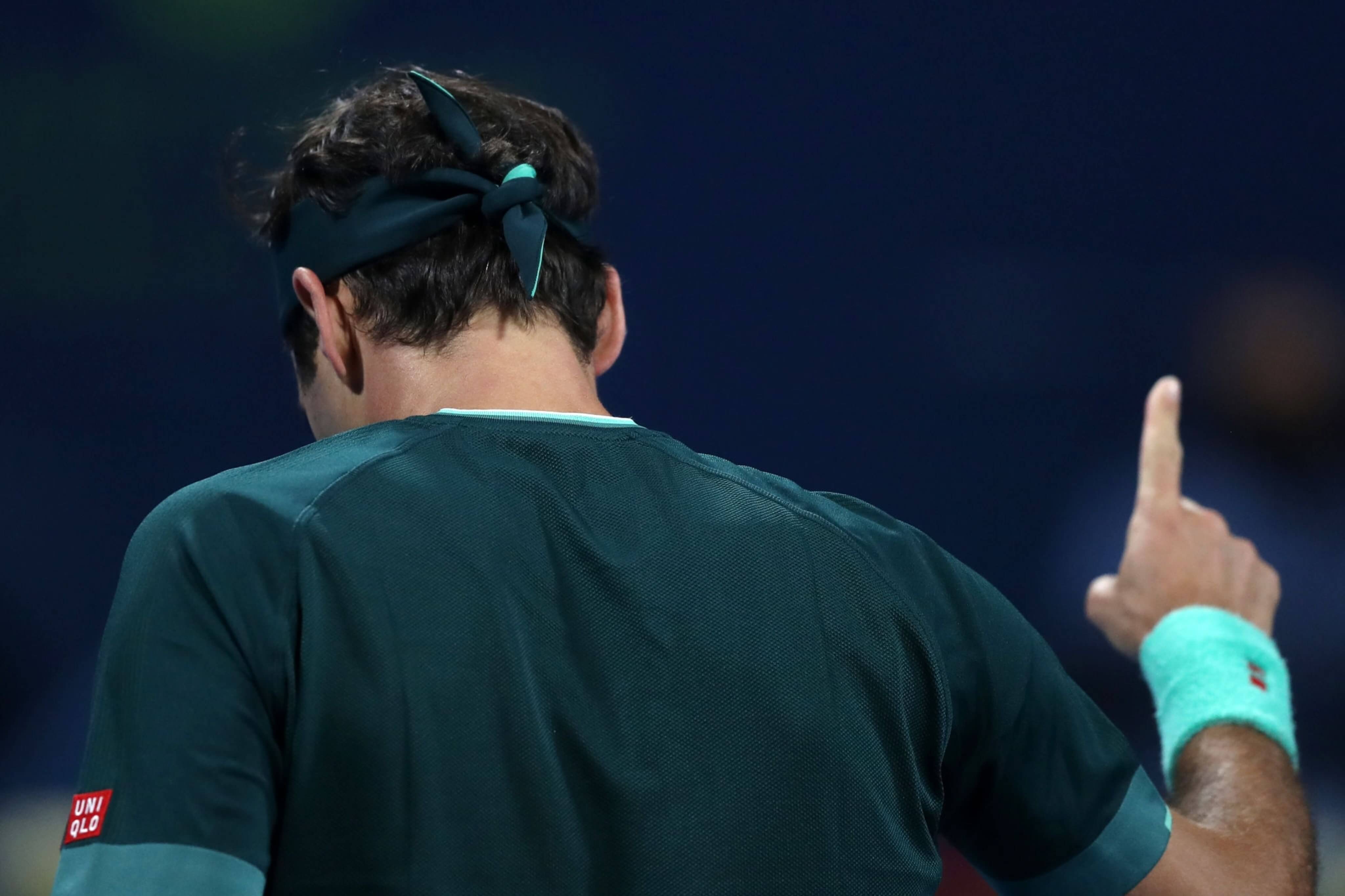 Next up is the hard-hitting Georgian, Nikoloz Basilashvili, who has recorded wins over John Millman and Malek Jaziri to make the quarter-final.

Federer has played him once before, a straight-sets rout at the 2016 Australian Open and Basilashvili has suffered a drop in form over the last year or so, perhaps owing to some off the court troubles, which of course aren't helped when in modern-day woketopia you're guilty until proven innocent, especially in the eyes of the media.

If this were Fed's first match back then, I'd expect him to win, but after a tough three-setter? It really depends on how he's feeling in the legs. Basilashvili has three titles to his name, and if he starts blasting winners, he can take the racquet out of your hands.

What did you guys think of Federer's comeback? Predictions vs Basilashvili? Let me know in the comments.