While double-digit slam Grand Slam titles put Novak Djokovic in elite company on the ATP Tour, he does have at least one thing in common with the vast majority of his fellow players: he doesn't use the tennis racquet that you think he does.

So what racquet does Novak actually use? Is it the Head Graphene 360+ Speed Pro Racket that he endorses? Is it even a Head racquet at all? Can you buy it? Let's take a look.

What Racquet Does Djokovic Actually Use?

If you take a look at any promotional picture or look online at one of the big tennis retailers, you'd be forgiven for thinking that Novak Djokovic uses the Head Graphene 360+ Speed Pro racquet.

However, like most professional players, Djokovic uses a Pro Stock frame, which is a Head racquet known as the PT113B.

This racquet is completely different in specs to the Head Graphene 360+ Speed Pro but is painted in the same colours to look as similar as possible.

Why? Marketing, of course. Big-name players help shift racquets from the shelves into your tennis bag.

But what is the difference between the Head Graphene 360+ Speed Pro and the PT113B?

Firstly, the PT113B isn't actually a racquet itself; it's the mould Head uses to produce this specific frame and is basically an in house code, much like an SKU or manufacturer part number.

While it has not been used to produce any retail racquets in a long time, the mould was used back in the early 2000s to produce the Ti/iRadical MP racquet.

What Specification is Djokovic's PT113B Racquet?

The PT113B mould is more of a starting point than a finished product with an exacting specification, so it is best to think of it as a blank canvas.

Rather than freeing it from the mould, spraying it up in the latest Head paint job and then shipping it off to Novak. The racquet goes on to be further customised by his racquet technician to match his specs, which are currently as follows:

How Has Novak Racquet Changed During His Career?

For the early part of his career, Djokovic was a Wilson sponsored player, and up until 2008, he used a Wilson racquet.

This was another Pro Stock racquet based on the H22 mould, which is now available for general sale as the Wilson Blade Pro.

In 2009, he switched over to Head, the brand he had used as a junior and used a very similar setup for almost 10 years.

However in 2018 after a slump in form and a serious elbow problem, Djokovic sought out more change, thanks in part to Andre Agassi who was coaching him part-time during this period.

Agassi put him touch with racquet technician Roman Prokes of RPNY Tennis who worked with Head to tweak Djokovic's setup.

This involved reducing the swing weight from 370g to 360g, reducing the static weight from 359g to 353g, extending the length of the racquet to 27.1 inches and altering the string pattern from 18 x 20 to 18 x 19. The result was an immediate positive with Djokovic dominating the tour and returning to world Number One.

For a more in-depth look at exactly what Djokovic changed, the man who was instrumental in these changes, Roman Prokes, did a podcast with Craig Shapiro which you can check out.

How Does it Compare to The Head Graphene 360+ Speed Pro? 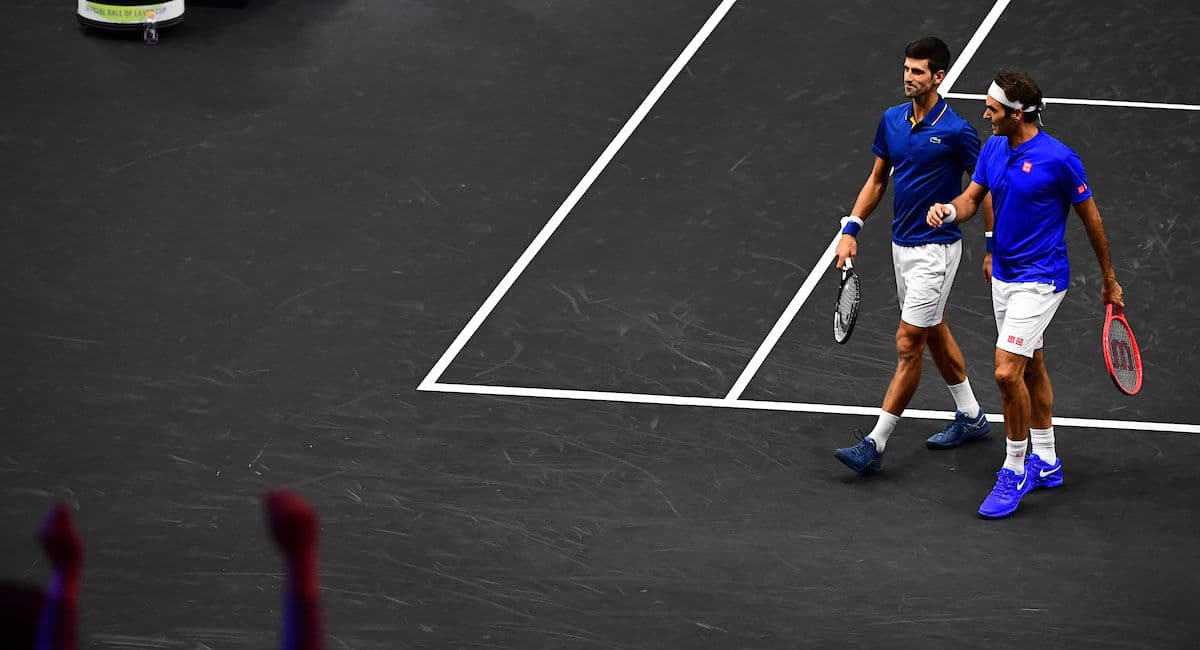 Novak's match racquet is so different compared to the one he endorses. I mean the head size discrepancy of 100 in² vs 95 in² is a big one but the racquets couldn't be further apart in specs:

Why Does Djokovic Use This Racquet?

Having previously looked in-depth at Roger Federer's RF97, one of the few players who actually use the racquet he endorses, it's always interesting to see how a player's racquet specs match their game.

If you look at how Djokovic plays the game, he takes the ball super early, hits relatively flat, redirects the ball rather than blasts winners, and uses his flexibility to defend ridiculously well. He also backs it all up with a very effective first serve.

For that style of play, what do you need? If you take the ball early, you need your racquet to be stable, which can only be done through weight. At 353 grams, Novak has that in abundance.

You need a denser string bed and a high swing weight for redirecting the ball on a flatter trajectory. The 18 x 19 pattern and 360-gram swing weight offer exactly that.

Interestingly, Novak's 18 x 20 old racquet was even denser and had a higher swing weight. But the change to an 18 x 19 pattern has spaced the strings out more. Prokes, Head, Agassi, and probably even Novak himself thought access to a bit more topspin would give him more time on the baseline and give opponents a trickier ball.

The reduction in swing weight and the slightly extended racquet length has also given Djokovic more speed on service, which is one reason his serve has become even more effective in the last couple of years.

It has also reduced strain on the elbow, which required surgery in 2018. Alongside game improvement; it also aided longevity and injury prevention. Safe to say that Mr Prokes knows a thing or two about racquets!

What Strings Does Djokovic Use?

Djokovic uses the same hybrid stringing setup as Federer, with Babolat Natural Gut in the main strings at 59 lbs and Luxilon Alu Power Rough in cross strings at 56 lbs. The tension will vary depending on the conditions.

How Does Djokovic's Racquet Play?

For a real-world playtest of Djokovic's actual racquet, I'd recommend watching this video from Tennis Nerd who was lucky enough to hit with it, and he gives a thorough review of the frame.

Just looking at the numbers, I can tell it's going to be brilliant to play with when the ball is in the strike zone, but for a typical club player to use in a match, it will be heavy, hard to manoeuvre, and over a few sets will be tiring on the arm.

Can You Buy Novak Djokovic's Racquet?

That depends. Do you want a racquet that looks like Djokovic's cosmetically? Then yes, buy the Head Graphene 360+ Speed Pro he endorses.

For most recreational players, you will play better with the racquet he endorses, rather than the one he uses as the weight and swing weight are too high for most players to use effectively.

But if you want an exact Djokovic racquet that matches his specs? You won't be able to pick these up from the shelf at your local tennis store. For this, you have a couple of options.

The first would be to try and locate a match used Djokovic racquet. These get auctioned off for charity, and in some cases picked up by websites like ProStockTennis.com. But they are both expensive and tough to find.

The other option would be to buy an old retail frame produced from the PT113B mould and customise it yourself to produce a racquet similar to specs. Racquets that use this mould, although they have a few slight differences (ridges etc.) are as follows:

While no amount of customising will get you an 18 x 19 string pattern, with some lead tape, butt cap extension and a few other tweaks you should be able to get fairly close to the specs Novak uses.

What do you think of Novak's racquet? Have any of you been lucky enough to hit with a match used frame of his? Let me know in the comments.