Rafael Nadal is through to his 12th Roland Garros final with a sweeping 6-3, 6-4, 6-2 over Roger Federer on Court Philippe Chatrier.

The Spaniard improved to 6-0 against his longtime rival in Paris and coped with the swirling winds to progress in two hours and 25 minutes.

Federer, bidding to make the final on his first appearance on the clay since 2016, never got a complete handle on the conditions and although he had some moments of success, Nadal was too strong and too consistent from the baseline to be ever really be troubled. 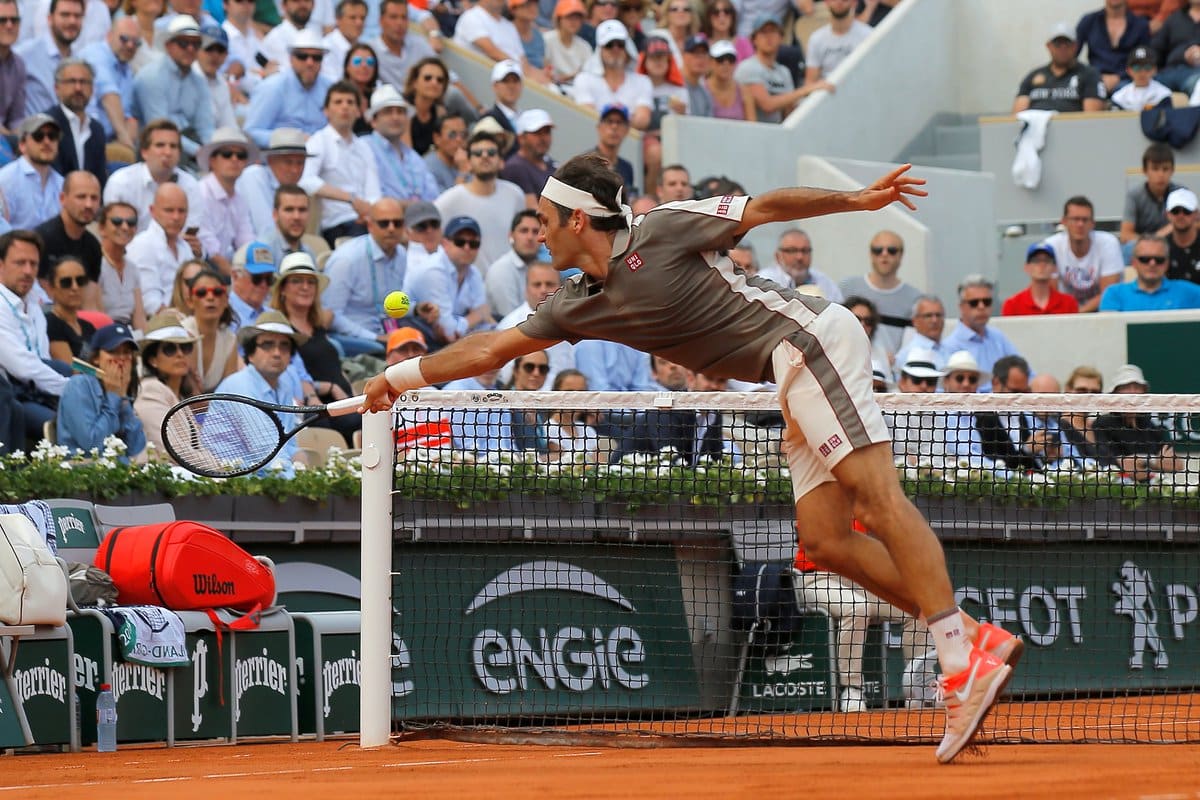 Federer won the toss and chose sides. Nadal chose to serve. With Nadal serving into the wind, Roger fashioned a break point in the opening game, but a good serve saved it and Nadal held.

With the wind swirling, Roger slipped to 15-40, and despite making deuce with a slick serve and volley, he was broken.

Nadal consolidated to love, but after Roger held to 15, he was back in the mix, breaking back when a Nadal backhand sailed long.

However, he wasn't able to get back on level terms, and after saving five break points in a marathon game, he shanked the sixth as Nadal broke for 4-2.

The Spaniard then consolidated for 5-2. A love hold put the pressure back on him to serve it out, but he obliged, saving a break point to take it 6-3 to get off to the perfect start.

Into set two and Roger kicked off with a hold to thirty and then got himself front with a break for 2-0 using the wind to his advantage.

Serving downwind, the Swiss looked in prime position to consolidate, but Nadal hit straight back, converting his third break point after Roger had recovered to hold a game point after being down 15-40.

The pair then exchanged back to back holds with neither fashioning a break point but at 4-4 Nadal made his move, winning four straight points from 0-40 to break and he served out the set to love to put one foot in the final.

Nadal doesn't lose many matches on clay, and he certainly doesn't lose them when two sets up so when he went up an early break to lead 2-1, the match was all but over. Federer knew it too, launching a ball into the stands in frustration.

Nadal held, then broke again for 5-1 and although Roger avoided the breadstick, there was no stopping Nadal as he moved into the final with ease. 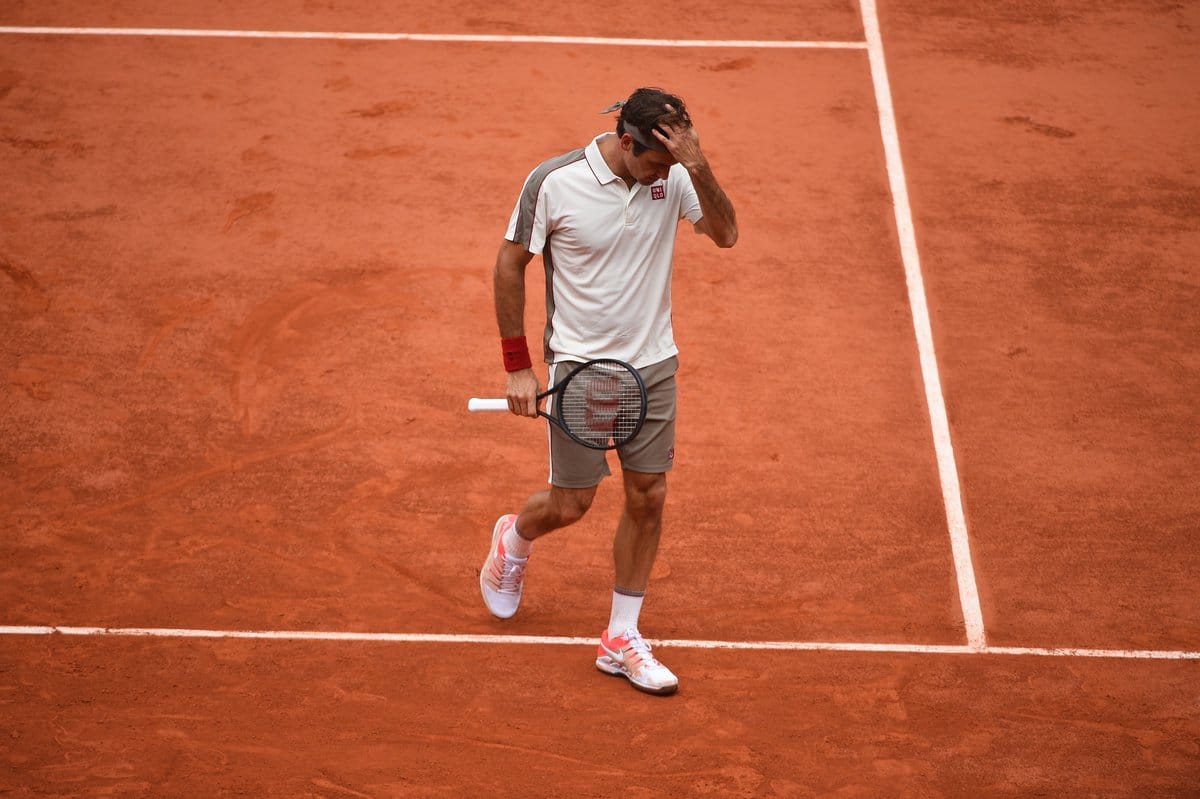 Yeah, so, I don’t know what I could have done a whole lot different, you know. Does it take my serve out of play a little bit maybe also? It just slows things down as well there. With the toss being all over the place, you’ve got to go for a bit more safety, and that’s just maybe enough for him to get more second serves. I don’t know. Or if I make the first serve, it’s just not – I can’t get the rhythm going, you know. You have that. But again, I don’t think I played poorly in the wind today. It’s just it’s tough on clay. You know, you’ve got to try to take on the half volleys, too, all that stuff. It just adds to the equation. He’s the best clay-court player, so I can accept that. It’s not a problem. Federer on his loss to Nadal

I'm a bit late posting this as for the first time in a while I wasn't able to watch. I did see the entire first set and the first couple of games of set two and have since caught up with the replay so here are my thoughts 🙂

First off, the weather killed the match as the wind prevented either player from producing their highest level of tennis. So from that standpoint, I picked a good one to miss!

I kept reading on Twitter beforehand that cold, damp conditions were going to favour Federer. But that never made sense to me. Federer's only chance against Nadal is to keep points short and penetrate the court to get on top in the rallies. Cooler, heavier balls stop that dead as he doesn't hit big enough to negate it.

Combine that with the swirling winds when you need to play a style of tennis that has fine margins, and it's going to be an uphill battle. The wind is a complete equaliser, and invariably steady tennis will win the day. However, you can't play steady tennis against Nadal as he'll eat you alive with his style of play, spin and intensity.

From Roger's side, I thought he played ok but he was ultimately on the receiving end of a beatdown. The first set was close and he did well to break back, but overall the numbers are all in favour of Rafa, he served better, hit more winners, won 48% return points which is too high and won 23 more points in the match which is a big difference. Nadal did exactly what he needed to do; his natural game is high margin, low risk and he handled the conditions better.

Like Roger said in the press conference the regret will be the second set as the third game was a real chance to make a match of things. Dropping serve there was a huge moment, as was the thirty all point at 4-3 as Nadal escaped that game after Roger was starting to string a few shots together then he broke from 0-40 to kill the match.

I thought it was a great tournament. I really enjoyed it. Crowd support couldn’t have been better. Maybe one of the best ever in my entire 20-year career that I have been on tour at a Slam. ‘Them always being there for me, supporting me in practice, at the matches, on the grounds whenever I came and showed up, they were always happy to see me. So that was nice. In terms of playing, I think I played really, actually, well. You know, I think I surprised myself maybe how deep I got in this tournament and how well I actually was able to play throughout. And next year, just like with any other tournament, I don’t know. We’ll see what happens. But I definitely enjoyed the clay court season and the French Open, so that would help the chances, I guess, to return to the clay. It’s not like it’s been a shocker, you know. So from that standpoint, it’s okay. Federer on the French Open as a whole

Anyway, despite the one-sided loss, Federer has to look back on the French Open as a success.  He's made the semi-finals of a tournament he’d not competed at since 2015 and more importantly, will feel he's well prepared for Wimbledon physically. I think he would have taken that when he decided to play the clay season at the end of last year.