As the Cincinnati sunset on Friday for nightfall to take over, tennis fans witnessed yet another young next-gen star shining bright this season.

Nick Kyrgios has ousted fresh new world no. 1 Rafael Nadal in straight sets, 6-2, 7-5, propelling him into the semi-final stage of the Western & Southern Open for the first time in his career.

Both players were due to play two matches as rainy conditions halted play on Thursday. Kyrgios had to resume his match with Ivo Karlovic, which was cut off in the first set at 4-3. In a tight three-set match he managed to overpower the tall Croatian 38-year old: 4-6, 7-6, 6-3. Nadal, on the other hand, defeated his countryman Ramos-Vinolas in a routine 7-6, 6-2 victory.

Even though Kyrgios had to go through a tough three-setter and Nadal is usually the one with the most stamina, it seemed the Australian was the one better prepared for the challenge.

Afterwards, Nadal brushed off the disappointment of losing to the Australian enfant terrible with familiar subdued reasoning.

“He is a tough match, always!” Nadal prompted. “He had some mistakes, and I was able to be back in the match.”

“Then, I played a terrible game. So it was a bad match for me.”

The terrible game Nadal spoke of was the eleventh in the second set. After saving two match points and breaking his 22-year old opponent to level the set at 5-5, Nadal was guilty of committing no less than three unforced errors with his forehand to hand Kyrgios the decisive break.

Kyrgios unwrapped this most welcome present and sealed the win with his 10th ace of the match, levelling their head to head record at two apiece.

“No excuses, nothing at all,” a down to earth Nadal said. “I didn’t play well. And if I don’t play well, I can’t win against a player like Nick.”

He also further elaborated on why he hasn’t enjoyed as much success at Cincy as he has at other Masters tournaments.

“It’s true that this tournament didn’t work well for me during the history of my career. I never had excellent feelings here; I don’t know. Still, I don’t like this ball. Still, I think it needs to improve a lot, this ball.”

Nadal resumed being candid in his remarks.

“In general it’s a tournament that I one time played great, in 2013, and I won. The rest of the times have been very tough for me to play well here.”

The Spaniard remains positive in his quest for a third US Open title.

“New York is a completely different event. Different ball, of course. In the history of my career in New York, I played a lot better. I was practising well. Probably going to rest two days. And I hope I did enough to be ready to play at the highest level in New York.”

He was aware of the criticism that comes with becoming the new World Number One on Monday.

“For me, it’s an amazing achievement being back in this position. I’m very happy about that. I need to show why I am in that position now. I need to show myself why I am there. So I’m going to work hard and try to play my highest possible level in New York.”

Australian Kyrgios shed his light on a day where he had to play two matches, with some trademark humour.

“You know playing Ivo (Karlovic) is a luxury, I guess. I’m not going to run very much. When I went back to my hotel, I just went up a flight of stairs.”

About the daunting prospect of facing Nadal, Kyrgios was clear about his preparation.

“I had a nap, showered up. I knew I just had to chill out for that match. I’m playing Rafa, and that went through my mind. So a lot of adrenaline.”

It’s fair to say Kyrgios has made a big step forwards in maturing his game, mentally and physically. He’s now up against David Ferrer in the semi-final stage, after the Spaniard upset Dominic Thiem in straights.

“It’s gonna be a tough battle, he’s a great competitor,” Nick said in praise of David. “It looks like he’s finding his range again. He’s playing much better now than last year. He’s playing some good tennis against some good players!”

Indeed a semi-final to look forward to. The other one features Grigor Dimitrov going up against big-serving John Isner at 14.00 Eastern time. The second semi-final between Kyrgios and Ferrer is scheduled at 19.00 Eastern Time. 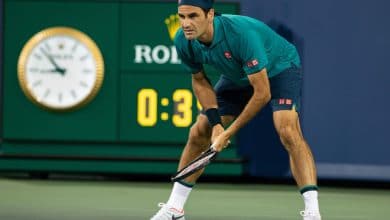 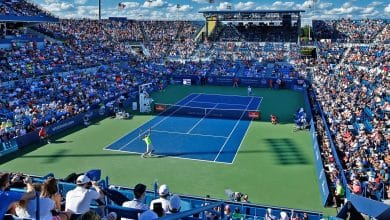