Ask any racquet stringer or tennis shop owner what the most common question they get asked every day is, and many of them will tell you it's “Do I need my racquet restrung?” “When do I know it's time for a restring?”

Despite this being widely asked, it's also something that not a lot of players ever even think about.

I know players at the clubs I've played at that have kept the same string job for years, and a fresh restring is only ever considered if a string were to break.

However, strings wear down from play relatively quickly and subsequently lose their elasticity and ability to hold tension.

If you leave them too long, it can negatively affect your game. Let's take a more in-depth look at why and when you should change your tennis strings.

Contents hide
1 Why Should You Change Your Tennis Strings?
1.1 Tension Loss
1.2 String Performance
2 How to Know When It's Time to Change Strings
2.1 Visual Indicators
2.2 Feel Indicators
3 So How Often Should You Restring?
3.1 What about Polyester Restringing Frequency?
4 Final Thoughts

Why Should You Change Your Tennis Strings?

Aside from breaking a string being the obvious reason to get your racquet restrung, there are two other main drivers of why it's time to cut and the strings and put some fresh ones in.

All tennis strings will lose tension over time. They begin to lose tension as soon as they leave the stringing machine.

Depending on the type of string, in the first 24 hours after stringing, strings can lose roughly 10 per cent of their tension, and this continues when you play with the racquet.

If you are a player that relies on higher tension for control and find that your accuracy of shot is reduced over time, then you'll need to restring to regain that element of your game.

As well as losing tension, strings eventually go dead. This causes them to lose their performance characteristics, which most likely the reason you chose to string with them in the first place.

This is particularly true for polyester strings as they will lose their snapback effect, which is a big part of how they help players generate topspin.

How to Know When It's Time to Change Strings 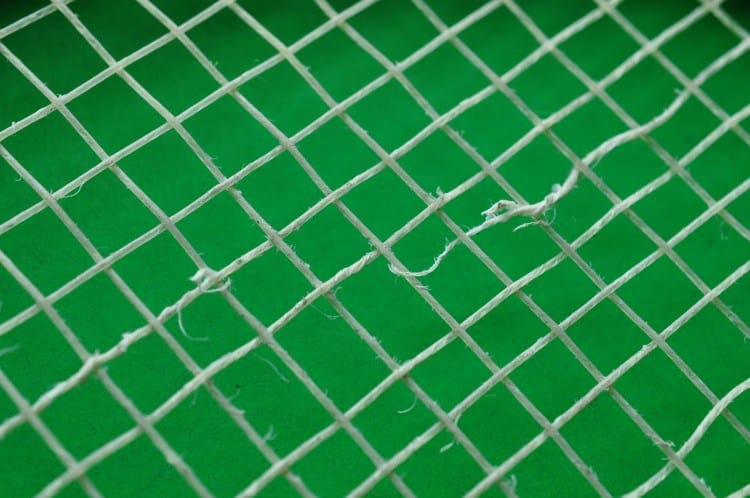 Most advanced players will know it's time to restring purely through feel, but there are a couple of visual things to look for.

When you make contact with the ball, your strings will rub together and produce friction, which causes the strings to notch.

If you look closely, you'll see grooves form where the main and cross strings intersect. This will be more evident towards the upper middle of your racquet, which is hopefully the area you make contact with the ball most!

If you see that these notches are close to breaking the string, or even just getting quite deep, it is likely an excellent time to restring.

Natural gut and multifilament strings are composed of lots of tiny fibres that are intertwined. When they are freshly strung, they often have a coating on to protect them, but once this wears off, the fibres will start to fray.

This is a natural part of the wear for these types of strings, so some fraying is perfectly normal. Fraying can also be exacerbated by humidity and moisture.

However, beyond a certain point, the fraying will reduce the gauge of the string to the point it will break. So if you see fibres fraying at all angles and the string looks weakened, restringing is probably the right choice.

For players just starting out, it's unlikely you will be able to detect subtle changes in feel on the stringbed. But as you develop your technique and your feel improves, you'll start to notice changes in how the string plays over time.

A Loss in Control

When strings lose tension, the ball spends more time on the string bed, which can lessen your control. A loss in tension can mean you will find yourself hitting just long, making more unforced errors or having difficulty placing the ball. If so, it might be time for you to restring.

When polyester strings lose tension, there is a reduction in the snapback of the strings, which means you have to swing harder to generate the same amount of topspin as you would on a freshly strung racquet. Polyester strings also develop dead spots, which causes an erratic response.

If you find yourself hitting with less spin and you have to straighten your strings after every point, then it's probably time to restring.

So How Often Should You Restring?

The reason for writing this post is due to the following question received via email. Below that is my answer, adapted slightly into a more general one.

Hi, do you have a general recommendation for frequency of restringing? I play 3 or 4 times a week, recreational mainly, but weekend doubles matches during the summer. I wouldn’t call myself an aggressive baseliner but more a touch player using a reasonable pace and placement more than pure power. Currently, I have Prince synthetic gut string at 53lb, in a Yonex DR 100, six months since last restring. I quite like this string but wonder if that’s a little loose and I might be losing some control. Any thoughts?

When it comes to racquet restringing, there's a general rule of thumb that most players are familiar with which is:

Over a year, you should restring your racquet the number of times you play in a week.

If you have not had a fresh string bed in six months, then I would say it's time to freshen things up.

Even if they look visually fine, the loss of tension and elasticity over time will have decreased the playability of the string.

For most players, this concept of stringing as many times per year as you play per week is not a bad rule to follow. Especially for recreational players who string with a synthetic gut and aren't hitting a huge ball.

However, the problem is that it's a rather broad blanket and can't be applied to all types of players or all kinds of string.

While the time you spend on the court is a significant factor, other considerations will determine the rate at which players get their racquets restrung.

This only applies to non-string breakers as they have no choice but to restring as soon as a string pops, but factors include:

Aggressive ball-strikers with full, heavy topspin strokes will wear through strings much faster than flat-hitting doubles specialists with abbreviated swings and touch play.

For most players, a visual test is more suitable than abiding by a restringing calendar. My rule is based on both a visual look at the strings and how they play.

If visually they look fine, but you play poorly in a match? Ok, it happens. Play the next match and the one after that badly? It's probably time for a restring. Even if the strings were fine, you're at least resetting psychologically 🙂

What about Polyester Restringing Frequency?

Not only that, but they also break down unevenly, which creates dead spots in the string bed, which can lead to erratic performance. However, because they don't break, players often keep them in their frames for too long.

For this reason, it's's often recommended replacing polys every couple of months at a minimum to restore playability and reduce the risk of arm related injuries from having to swing harder to get the same amount of pace.

Ultimately, like most things to do with tennis racquets, restringing does boil down to personal preference and how the individual player feels about a racquet's performance.

Many players love to play with a freshly strung racquet; others enjoy them more after a break-in period, and some even like strings when they are completely dead.

I like a racquet pretty much just after it's freshly strung, so I usually restring my racquets before a more meaningful match.

Or if I know I'm playing a few times in the coming week, I'll bump up the tension, so when it comes to the second or third hit, the tension is somewhere around what it would be if it were fresh off the stringing machine at my desired tension.

From there, it's all about keeping tabs on your play throughout the life of the string job. Do I have to swing harder to create pace and spin? Are the strings biting the ball, or do I have to readjust them after every point? Is shot placement and predictability starting to go awry?

Usually, when these questions enter your mind across 2 or 3 hitting sessions or matches, it is time to restring, and that's the rule I follow.

Depending on the strings and your playing frequency, this can take as little as a week, or as long as a few months.

So while it's not an exact science, I think it's best to replace strings too early rather than too late. And so does your club stringer or local tennis shop 😀

How often do you restring your racquet? Let me know in the comments below