The recent Serena Williams debacle got me thinking about Tennis Umpires and more specifically how much they get paid to do the job that sees them travel to all four corners of the Globe for 11 months of the year.

Before doing any research, my estimate for the top umpires was around the $70k mark with most expenses covered. It turns out I wasn't too far off, but the rate of pay does differ quite significantly depending on where your officiate and what level you have reached. Let's take a look.

TL;DR A Gold Badge Tennis Umpire's salary is about $80k per annum. Lower level umpires pull in around $30k per year.

An Umpires “Badge Level” Determines the Rate of Pay

To become an International Level Tennis Umpire you need to pass a Level 3 School certification. Before that there's L2, L1 certifications for Umpires just at the lower levels.

Once you pass the L3 certification, Chair Umpires start as a Bronze Badge and depending on their performance will be promoted to Silver and then to Gold in the annual review conducted by the ITF, ATP and WTA. This can be a lengthy process; for example, it took Eva Asderaki four years to move from Bronze to Silver.

On the circuit right now there are 31 gold badge umpires, and as you can see from the list below, they're the ones we see on all the show courts at the main tournaments. They're also the highest paid due to the Gold Badge status.

Current Gold Badge Umpires as of 2019

From my understanding, while still self-employed a small number of chair umpires are on full-time contracts with the ITF so as part of the agreement will need to be present at certain ITF sanctioned events. Another portion have deals with the ATP and the same for the WTA.

The others are purely hired guns, so they can pick and choose which tournaments they want to work. So the number of gold badge umpires at any of the given Grand Slams varies as they can choose to skip it or umpire elsewhere.

In 2011 some umpires actually skipped the US Open as the pay just wasn't worth it, other complaints were it was poorly run with too long hours. So that is why you see some lower-level umpires officiating matches in the early rounds.  However, a gold badge umpire will be officiating every match from the quarterfinals onward at a Grand Slam.

So How Much do Umpires Get Paid?

At the 2018 US Open gold badge officials received a standard day rate of $450 which is is the lowest of any of the Grand Slams. In 2011 this was $250 per day, so there has been a bit of a pay rise since then even when you factor in inflation.

Unfortunately, I don't have the 2018 figures for the French Open and Australian Open. However, based on the 2011 numbers and how the other Grand Slams have upped it we can get a pretty good idea.

Both the US and Wimbledon have upped pay ~100% since 2011. So with French Open Gold Badge Umpires receiving €190 per day in 2011, it's going to be around €380 ($443) per day right now. This figure could be slightly out as many quotes I've seen say the US Open is the worst paying Grand Slam for Umpires, or at least it was historically.

So if you worked a fulll US Open with 1 day off, you walked away with $5850 after two weeks work. Based on the rates above  working all 4 Grand Slams in a year will give umpires around $25k.

From there, a quick look at the ATP Calendar and an Umpire could do around another 25-30 tournaments per year each lasting a week at a time.

The rate of pay is naturally going to be lower at the smaller events and will vary depending on the size, prestige, and revenue of the tournament.

These calculations tally nicely with a BBC article about becoming an Umpire which is no longer live, it said:

The Differences Between Badges Extend Beyond the Rate of Pay

Alongside the daily rate of pay, Gold Badge Umpires do get a few other little perks. Perks include meal vouchers at the tournament ($30-40/day), and for Grand Slams they do get accommodation sorted. Accommodation is a private hotel room at the US Open and French Open; a shared two bedroom apartment in Australia and Wimbledon requires umpires to sort their own housing which is subsidised at $120 per day.

Travel expenses are also partially covered by each of the Grand Slams, which ranges from $500-$1000, with the US Open offering the least.

As for the lower level umpires, some of their expenses are covered but when they're without contracts for events, flights will be paid out of their own pocket.

So there you go, it's around $70-80k a year for the top level umpires, peanuts compared to what the players earn but in the grand scheme of things, there are worse jobs out there.

What do you guys think of the job? Are they being remunerated sufficiently? Would you be a Tennis Umpire? Let me know in the comments.

And if any current or former umpires read this (or anyone who is privy to information I'm not), feel free to send any corrections or additions my way. I'm not a journalist and this blog is just a hobby, so your anonymity is guaranteed.

How Will The Coronavirus Affect Tennis in 2020? 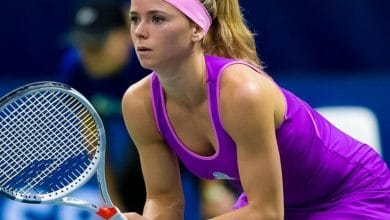 The Hottest Female Tennis Players of 2020