Since the late 1980s, players have enjoyed Head's line of Prestige rackets. The Prestige Pro, launched in 1987, had a thinner frame relative to many other rackets on the market. This helped aerodynamics and, combined with smaller head sizes, made the frames famous for their control and precision. Today, big names like Marin Cilic, Aslan Karatsev and Gilles Simon use the Prestige range.

In the Winter of 2021, Head unveiled a new line of Prestige rackets:

The big difference in 2021 is that Head introduced Auxetic material into the frame's construction. This expands and contracts with the ball's impact, offering a greater feel. Another change is that Head subtracted the choice of an “S” frame – the lightest of the range with an unstrung weight of 295 g. Now the most lightweight is the MP L, which weighs 300g. 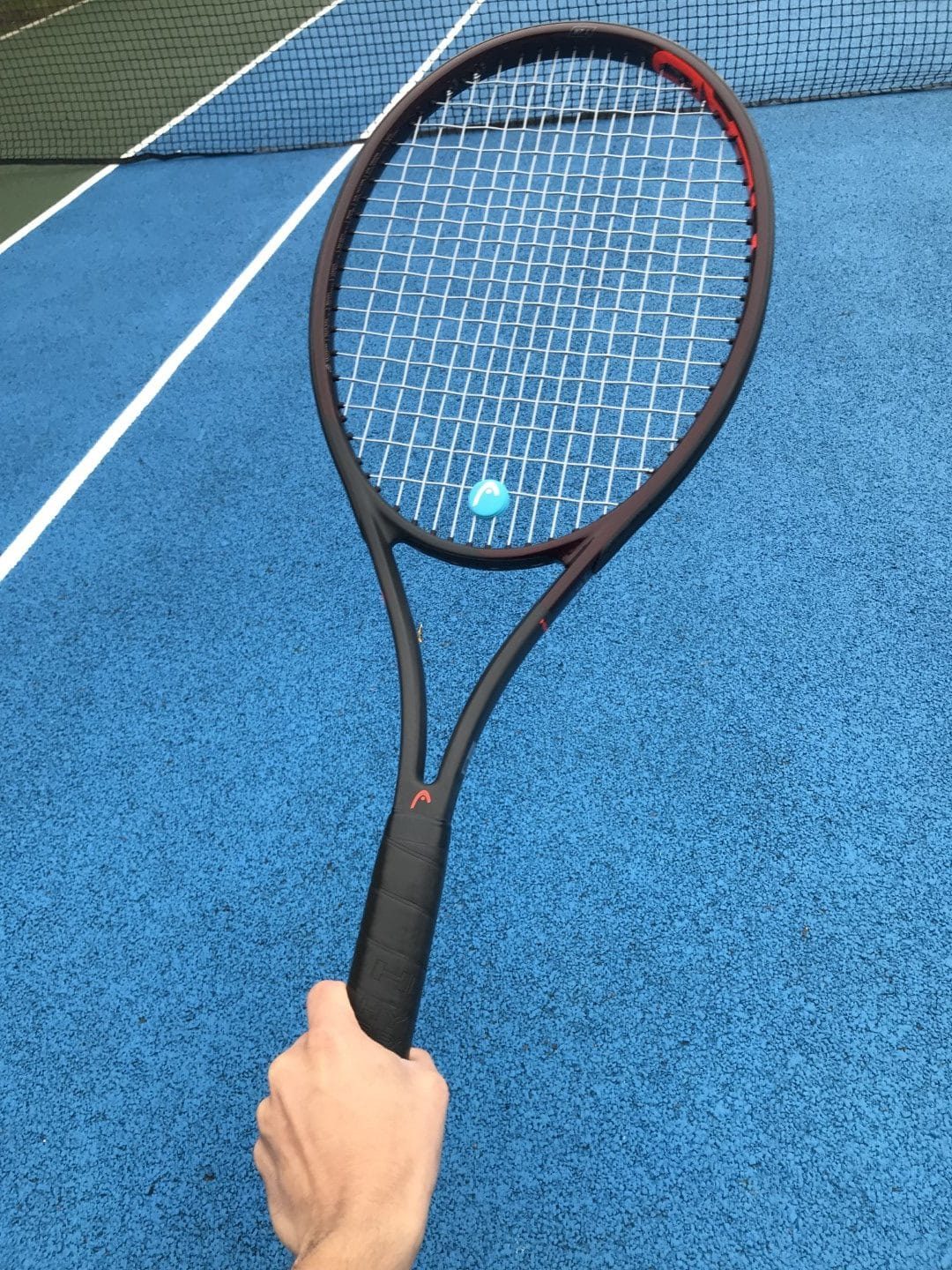 The new look of the Prestige is a stark contrast to its immediate predecessor range and calls back to its original roots. In 2019 the racket was decked out in a striking bright red. Here, the pallet is instead subtle and stylish – a matte black base with a rich, glossy burgundy (first seen in the 1987 Pro model) diagonally sweeping the frame, as if the racket had been dipped at an angle.

This toned-down but professional looking cosmetic better suits the frame's sophisticated and precise capabilities. Head uses the brighter red colour sparingly but to significant effect, with the logo and company name standing out proud against the relatively darker background.

Along one side of the throat, “Prestige” is spelt out boldly with a red “P” and light-grey accompanying letters.

The bumpers are tapered and cleaner, appearing integrated with the frame itself, and don't stick out at the end like previous iterations.

The Prestige MP L racket used in this playtest was strung with Head Hawk at 55 lb, giving a strung weight of 317.9 g and a swing weight of 324.8. I measured the strung balance at 330 mm.

With the 2018 Prestige as my regular racket, I was excited to give its updated counterpart a playest. The first thing I noticed was the weight – a 5 g addition to what I was used to. Instantly everything was smoother and more stable.

When I set up my legs for a shot and felt the racket hang for a moment in the air, I noticed the mass gently bearing on my wrist and the additional power, and plough-through it generated. There was little or no resistance on contact. The swing path was like a knife cutting through butter, as I felt the frame deal with the ball with ease.

The ball came off with a satisfying “thud” and travelled with more momentum towards its target. Consistently, the racket possessed this same, smooth comfort.

Aesthetically, I love the matte black and glossy burgundy. In an attempt to become increasingly Federesque, I had tried out the Wilson Pro Staff 97 a couple of years ago but found it unforgiving and difficult to control. Here, the new design of the Prestige gave me a reprieve, with the black background edging me a little closer to Federer's style.

One thing I appreciated was the factory default grip the racket came with. Since buying my 2018 Prestige frame, I treasured the Head Hydrosorb Pro grip. It was thin enough to feel some edge from the bevels but sufficiently comfortable to hit with for extended periods.

It was the perfect level of tackiness without chaffing my palm. When it was time to replace the grip, I searched high and low for the same version.

The individually available Head Hydrosorb Pro grips were slightly thicker and waxier, similar to the original, but never had the same magic. The thinner default grip on the MP L helped me control the racket and aided manoeuvrability.

Overall, the weight gave my groundstrokes more length, so even when I hit a comparatively weak shot or was on the defensive, the ball still landed with enough depth on my opponent's side of the court. I maintained complete control over the shot selection, varying speed, the level of topspin especially, and direction with no issue.

On the forehand side, I found the Prestige MP L very helpful in generating extra topspin. An increase in head size (by five in2), and the classic thin frame, meant the ball leapt over the net and came down with considerably more arc. Especially while playing on the artificial clay, this denied my opponent the chance to build up the rhythm from the baseline, with the high topspin forcing him further back into defence.

I felt my attempt at winners down the line was consolidated with the extra momentum behind the ball, making it harder to track down and return. If I wanted to flatten out the ball, that produced the most explosive shot from the MP L frame, combined with the punchy aggressiveness of Head Hawk. Especially if taken on the rise, a flat groundstroke would be greatly penetrative and almost impossible to return.

If I had time to prepare a decent shot on the backhand side, the frame was superb at delivering a flat backhand drive. It seemed more accessible and comfortable to hit, with a heavier frame doing most of the work.

The only drawback on that wing concerned the backhand slice. On this shot, I found the heavier racket slightly harder to move around, generating a weaker slice and spin in the process. However, this was not a significant disadvantage, as I only found the issue occurring when I was a little slow in my preparation and footwork.

Initially, there was some sacrifice in precision due to the larger head size. When I aimed for a particular target, at first, I was only able to hit around it, as opposed to exactly where I intended the ball to go. But it did not take long to adjust, and I soon found myself aiming for lines with the same confidence I had before.

When it came to serving, the extra weight helped me hit with more conviction, and again I felt the racket do most of the work for me, hitting through the ball rather than at it. The MP L is very good at a hard, flat serve and also excels at a kick or a slice out-wide.

Here, I found the larger frame size helpful in generating more side and topspin. If I had a mental blip and felt a little nervous on the second serve, the racket's weight would accentuate the feeling of weakness in my hand, where a few balls found themselves hitting the net.

The racket afforded excellent stability in the forecourt. The frame was very dependable at deflecting fast balls with ease when coming into volley. The racket did not shudder and stutter on impact and made for smooth shots at the net to close out a point. I found drop shots and more delicate touches easy to pull off.

The Auxetic material gave a slight yielding quality to the racket, which felt good to handle. It also offered a real connection in sensing the ball on the strings. Especially during singles, I had mental confidence in the racket when volleying helped me stretch out wide for balls and stopped me from being passed at the net.

Against fast servers, I had to stand a little further back than I ordinarily would to return serve effectively. Standing closer to the baseline, I found the racket slightly slower to manoeuvre with less time to react. A change of returning position quickly solved the problem.

Against slower servers, the MP L was a delight. I set up a deep shot, and from the excessive plough-through, hit a winner off the return of serve. As with volleying, the racket's stability boosted my mental confidence when returning and encouraged me to unload on the ball.

Who Is This racket For?

The Prestige MP L is geared towards high-level intermediate and advanced players. It is especially suited for players who enjoy hitting acute topspin and flat balls.

The weight will benefit players competing against opponents who similarly hit heavy balls, and therefore need the stability to deal with the increased speeds to avoid being blasted off the court. Despite its power, I was pleasantly surprised by its volleying abilities, and the feel would complement the games of players who like venturing towards the net.

I would be wary recommending this racket to a beginner, as its level of control and precision may be difficult to play with at first, but by no means is it impossible to learn with practice.

The MP L is a classy racket to look at. The smoothness of hitting with the frame from the baseline was a joy. The sensation of hitting through the ball with little to no resistance is just magic to feel, and seeing the ball fly off with such weight and momentum was satisfying.

I love the stability that the frame brings for volleys, making it a good racket for doubles and singles.

Though it has some drawbacks surrounding weight on the return of serve, these are easily fixed by tactical adjustments.

Have you tried the new Prestige line from HEAD? Let me know in the comments.

The classic Prestige range continues into 2021 with added feel, while maintaining a punchy and precise ball-striking experience. Intermediate and advanced players will appreciate the racquet’s competitive features, with an all-court game and the ability to impart deadly amounts of topspin.