I connect with Dave Seminara over a WhatsApp video call, and the first thing I notice is the glittering swimming pool behind him. Cold though beautiful, England in February is not as exotic as the southern coast of America, and I yearn for the heat one so often sees bathing the courts at the Miami Open. Waves of Floridan light from the water dance above his head as we introduce ourselves.

The first thing we talk about is Federer, though soon move on to other players. I promise not to tell him the result of the Kyrgios versus Thiem match he has yet to see. Both of us are excited about Federer’s return, and the new book's discussion provides a welcome relief to his absence.

Footsteps of Federer: A Fan’s Pilgrimage Across 7 Swiss Cantons in 10 Acts wasn’t meant to be a book at all. The New York Times commissioned an article with Seminara covering the ATP 500 Swiss Indoors in a 10-day trip. But what resulted was a far larger project – to go to Switzerland and explore Federer’s roots and why he still holds such an affinity for the place today.

Footsteps is an intensely personal journey too. Health complications had previously forced Seminara to suspend his own tennis. After recovering enough to resume sporting activities, the trip in October 2019 would also serve as a great comeback stage – the chance to play tennis once again, but this time on the home courts of one of the all-time greats.

In 10 chapters, Seminara visits key places and scenes from Federer’s early days, talking to people who knew him and could shed some light on the origins of his tennis journey.

Footsteps is as much about Switzerland as it is about Federer and serves as a great insight into how local customs and culture shape the people within them. So, without giving too much away, what makes this new work on Federer so special?

The book is unique among others in tennis literature. There have been many excellent overviews written on Federer’s career. Usually, the author starts from the present day, then looks back at Federer’s career retrospectively and navigates through his rise.

What Seminara does instead starts from the beginning of the story and look forward. Not only does this provide a new perspective for the reader, but it also opens the chance to explore new themes, like family history and religion.

The start of his trip to Berneck was, according to Seminara, a “spiritual” one. Not only is this the place where Robert Federer (Roger’s father) comes from, but of the approximate 100 Federers living in Switzerland, a significant concentration of 30 live in Berneck. Seminara delves deep into Federer’s ancestors' story to reveal the original meaning of the name and the local Swiss politics that divided the Federer clan in the nineteenth century.

He later visits Einsiedeln Abbey, pictured below, meeting Abbot Federer, who had baptised Roger’s children there. Seminara is keen to paint a whole “life” portrait, not just a career story, which offers a comprehensive and well-rounded view.

Another positive feature of the text is attention to detail. The masterstroke by Seminara was to blend two genres of writing – sport and travel. Naturally, the subject of the book would be about Federer and explaining various aspects of his life.

I wanted to see everything with my own eyes. Dave Seminara

But travelling and having conversations with the local Swiss who knew and experienced Federer yielded insights that couldn’t be found anywhere else. “I wanted to see everything with my own eyes,” Seminara says, as he told me being there made him realise something about Federer’s success. “People say Lynette [Federer’s mother] was not pushy but encouraging” and that she was a positive influence on his tennis, having worked at the Swiss Indoors herself.

Visiting Federer’s childhood home was revealing – it was a modest townhouse, and the family had clearly sacrificed a lot of money to put into Federer’s development as an athlete.

The home was also close to where Federer practised at the time, and the club was easily accessible by bike. It was clear for Seminara that Federer had a particular setup in Switzerland that was conducive to building a good foundation for his tennis career later on.

Footsteps is an emotional story too. Though most of the journey is spent learning about Federer, it is punctuated with moments of playing tennis on Switzerland’s courts.

During a visit to Tennisclub Seeblick across from Lake Zürich, Seminara can play tennis once again after many health difficulties.

Later at Tennisclub Felsberg on the “Roger Platz” – one of the courts Federer used to help him prepare for the Madrid Masters – Seminara finds great momentum in his groundstrokes and regains some of his old skills. 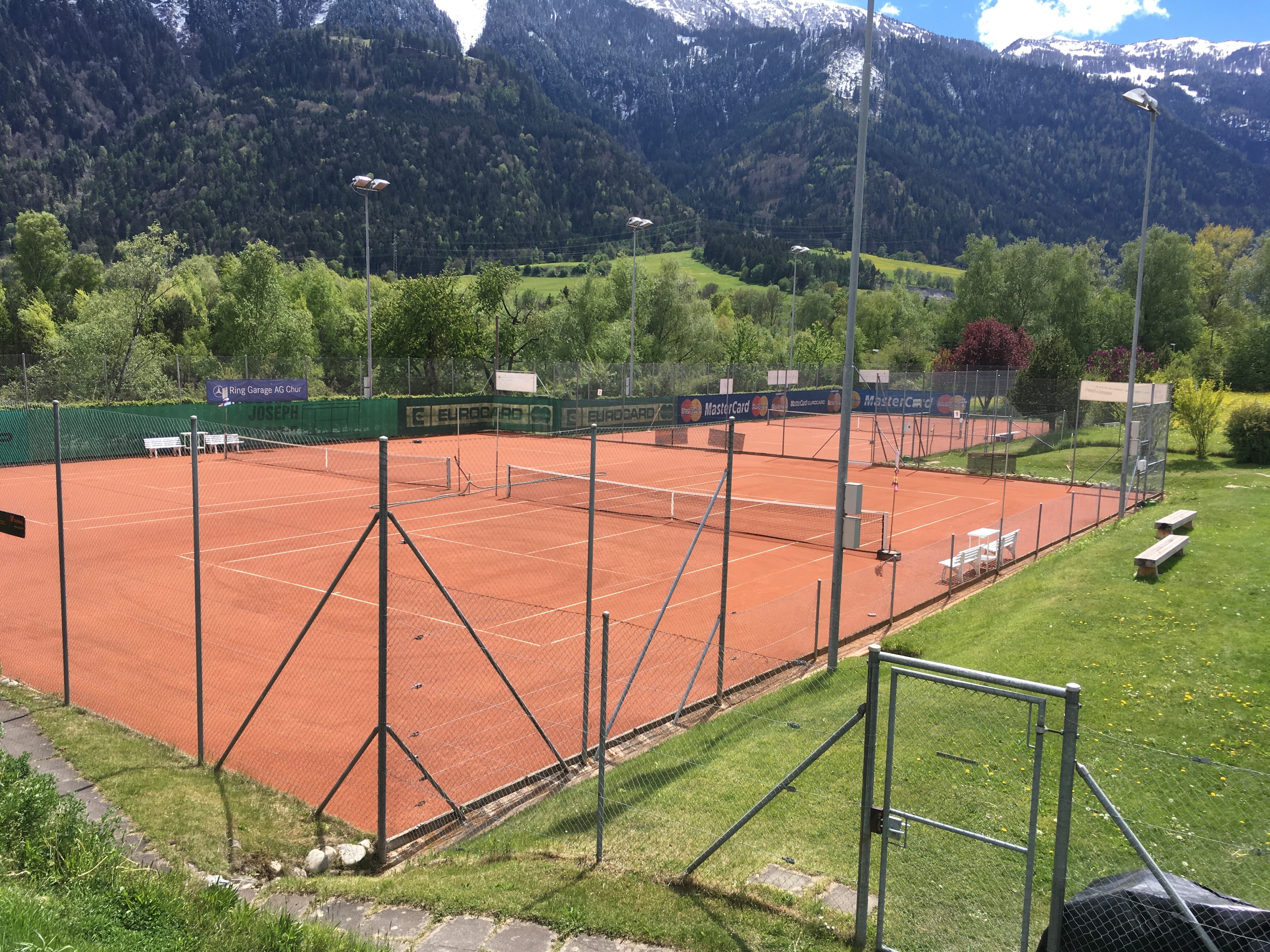 The event proved to be a deeply significant one. “And all of a sudden I choked up…as the reality hit me – I was back playing tennis again after all of the hell that I’d been through! Roger is an emotional guy…but I’m more of a stoic type, so I pulled myself together and got through it.”

The book is a timely reminder never to take tennis for granted. Especially during a global health crisis and far-reaching limitations over the sport, Seminara’s comeback tale inspires us to make the most of every playing opportunity and relish it while we still can.

The book's highlight is when he visits the Swiss Indoors tournament and meets Federer himself at the press conferences.

I ask what Federer is like in person. “He has a tremendous presence,” Seminara tells me. “When he walks into the room, there’s a hush. Everyone suddenly stops looking at their phones…even reporters who have been covering tennis for 20, 30 years with Sampras and Agassi turn quiet.”

He shows you basic respect as a person…other athletes don’t give as much attention.Dave Seminara on Federer's Press Conferences

There’s a certain “reverence” that people have for him, and there’s “something about his face – he has a strange handsomeness.” Direct contact appears to leave an even greater impression. When you ask Federer a question, Seminara says, he looks at you – tries to give something back. “He shows you basic respect as a person…other athletes don’t give as much attention.”

Though many of us would love to meet Federer, we’re unable to encounter him on the street and strike up a conversation. But the book gives us a glimpse into what being in a room with Federer is actually like. “Roger is the man – I just admire him in so many different ways […] You never hear anything negative about him.”

One of the book's main themes is the relationship that Switzerland and Federer have with each other. The locations of Federer’s current houses, Seminara tells me, reveal something about him; they’re close to nature and evoke a sense of tranquillity. “Roger embodies Swiss culture.”

Hearing this and reading the book had put me in a dilemma – does Federer remain cool and collected simply because he’s Swiss?

The graceful style, the effortless play, the humble nature and politeness on and off the court – maybe it had nothing to do with Federer being special in himself, but simply because he came from a particular culture? I didn’t want to think like this, but after reading that so much of Switzerland was reflected in Roger, I couldn’t help form the issue in my mind.

Luckily Seminara came to my rescue after I posed the question to him. “Not everyone lives up to their stereotypes,” he reassures me. Sure, Federer has a lot of the Swiss in him, but he chooses to embrace it and holds himself to a high standard of behaviour.

In turn, Switzerland helps explain why Federer and his family still reside there while so many tennis players live far beyond their home country.

Seminara found that there’s “no hero worship” there, and Federer can live a “somewhat normal lifestyle in Switzerland.” The book recalls a moment where Seminara actually bumps into Robert Federer with one of his grandchildren in a hotel lobby but is left completely alone by the locals.

Footsteps does something that no other piece of tennis literature does by exploring Federer’s Swiss roots. It is touching as it is informative and will be a great treat for Federer fans who want to immerse themselves in a first-hand experience of the culture that formed one of the greatest players of all time.

Most importantly, we can get a sense of what Federer is really like in person and understand why the connection between him and Switzerland remains strong.

Footsteps of Federer by Dave Seminara is published by Post Hill Press and will be available from 2 March 2021.