Roger Federer is a ten-time champion at a single tournament for the first time after bagging his 10th Noventi Open in fine style with a 7-6(2), 6-1 victory over David Goffin.

The win also means Roger has landed his 102nd career tour-level title and he'll head into Wimbledon in a weeks time as the second seed after overtaking Nadal thanks to the win here in Halle and his performances on grass over the last two seasons. 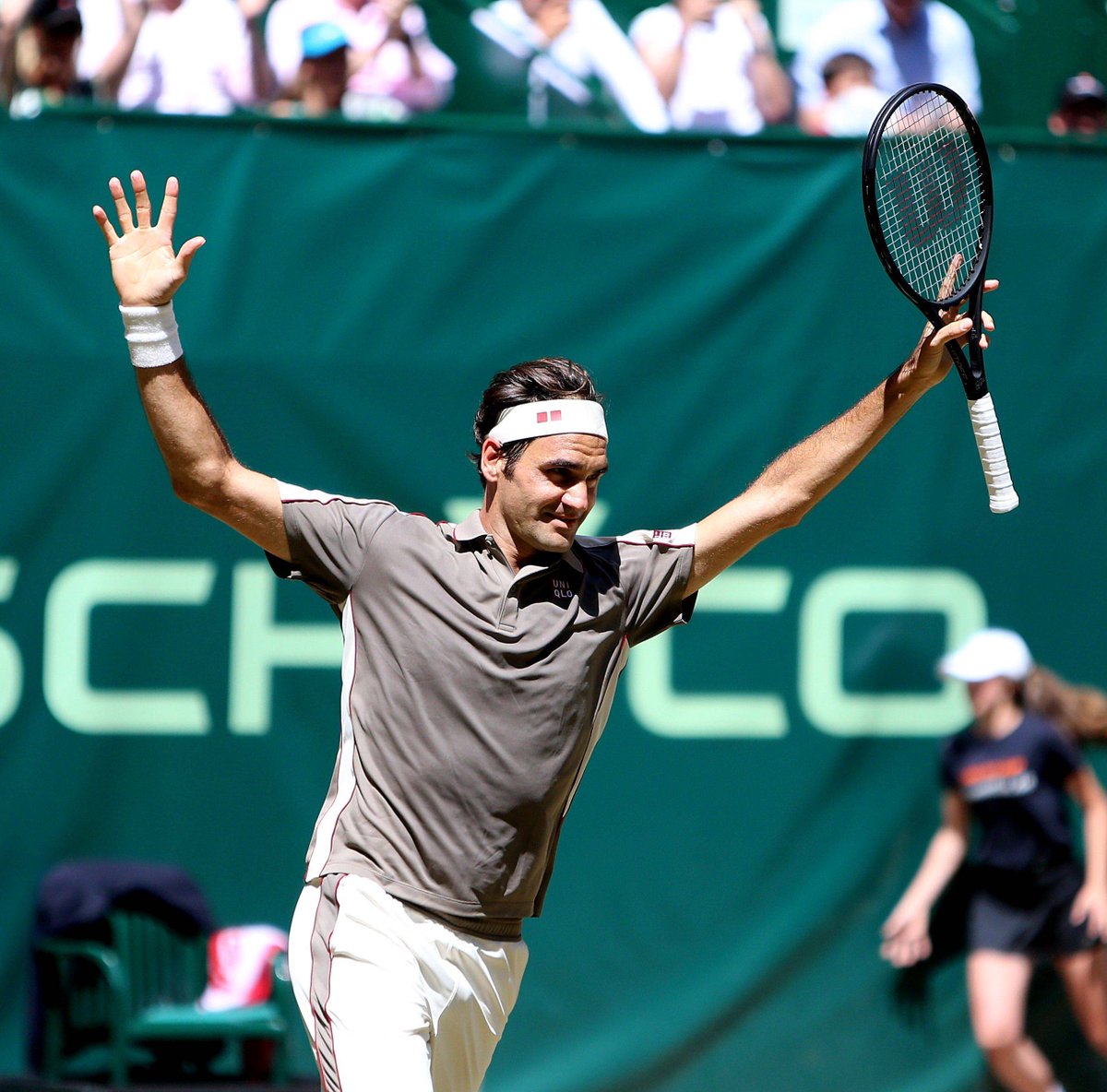 Goffin won the toss and elected to receive. Roger kicked off with a hold to fifteen with two crisp forehands to take the game.

The diminutive Belgian isn't known for his serve but he rolled down a love hold to level. Roger matched him and then had thirty all on Goffin's serve but couldn't make any further inroads.

Goffin then created 0-40, capitalising on some short balls to dominate from the baseline but Roger recovered, finally holding after a multi-deuce game thanks to sharper serving.

The Swiss found himself again trouble in games seven and nine when he lost the first point to walk on thin ice but again recovered to hold for a 5-4 lead.

Roger then had a half chance at 0-30 thanks to a joke volley from Goffin but a netted return and big t serve got him level and he held for 5-5.

The pair then exchanged serves and the set resulted in a tie break. Into the breaker and Roger kicked off with the trusty serve and forehand combo to win the opening point.

A sloppy forehand error from Goffin then gave him the immediate mini break and the Belgian went AWOL as Roger raced into a 5-2 lead before sealing the tiebreak 7-2.

Into set two and Goffin was still under the cosh, struggling to inject pace on some of Roger's slices and despite saving a break point at 30-40 and another later in the game, he dropped serve courtesy of a double fault to give Federer the 1-0 lead.

The Swiss held for 2-0 and from there he was able to assume full control, holding to fifteen for 3-1, breaking for 4-1 and winning the next two games to take the title home in 1 hour and 23 minutes. 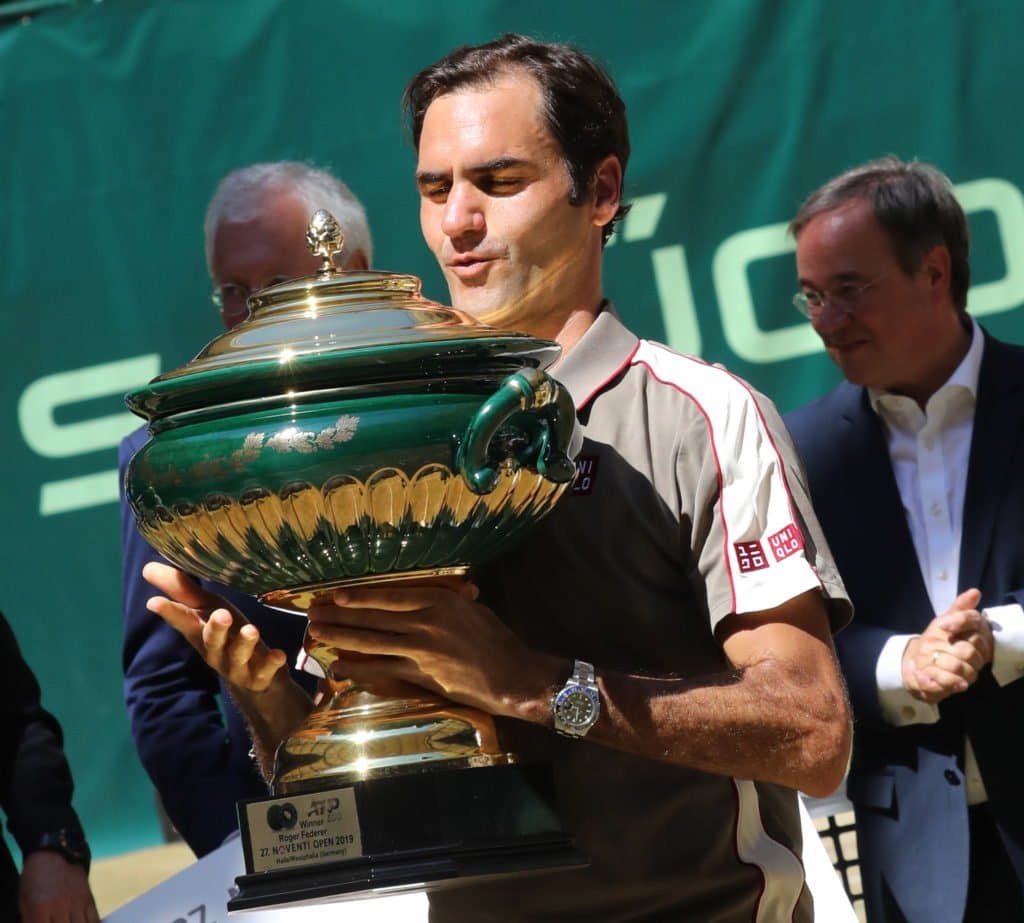 He was the better player for probably the first 10 games of the match. He had more chances. He had big chances, too. Then I played a really good tie-break. I was able to run away with the lead getting the break early on in the second and I think that maybe calmed down my nerves. His level might have dropped just a tiny bit, but it was tough to play with the shadows, it’s a fast court. David of course also had a great week, so clearly he was feeling it from the baseline. But I was able to tough it out and at the end, I was able to really play some great tennis, so I couldn’t be happier right now. Federer on his 10th Halle title

This match capped off my week in Halle and what a peRFect end to the tournament :). For the vast majority of the first set, Goffin was the better player as he was taking control once the rally went a certain length by mopping up short balls with aplomb.

Roger played well to force a tie break having saved three break points from 0-40 and had to keep coming back from 0-15 situations multiple times. However, once the breaker started Roger took charge after Goffin made an untimely forehand error and from there he was never able to recover. I thought the Swiss did a great job of mixing it up on his backhand to throw in the slice, Goffin doesn't have a great slice himself so he's forced to try and change the pace of the ball which decreases his margin.

Roger nabbed the set, get the early break in set two and then Goffin is hugely behind the eight ball. He did try to get back into it of course but Federer's first strike tennis took over and the rest is history.

As for the tournament, it was a great week, Roger not at his brilliant best but his level was consistent throughout and he managed to squeak through two tight matches so he has to very happy with what he's been able to produce given no real practice on grass pre-tournament or rest post French Open.

What did you guys think of the final and the tournament? Let me know in the comments 🙂

And apologies for the slightly delayed posts for the last few matches. Whereas normally I can hit the new post button straight away, watching live means I have to find food after matches, hang out with other fans and then drive back to Airbnb etc. and is why I haven't been active in the live chat. But I will do be doing a fan story next week to sum up my week in Halle. It might be access all areas or maybe I'll just keep it brief, we shall see 🙂