Roger Federer is through to the second round at Wimbledon, courtesy of a mid-match retirement by Adrian Mannarino.

The Swiss had just started serving in the opening game of a fifth set decider when Mannarino threw in the towel, having injured his knee a game earlier, leaving the score at 6-4, 6-7(3), 3-6, 6-2 after 2 hours and 44 minutes of play.

Mannarino, making his 10th Wimbledon appearance and getting to play on Centre Court on his birthday, slipped in the seventh game of the fourth set, injuring the inside of his right knee, which rendered him unable to put any weight on it.

Federer will next face another Frenchman in the shape of Richard Gasquet in the second round on Thursday. 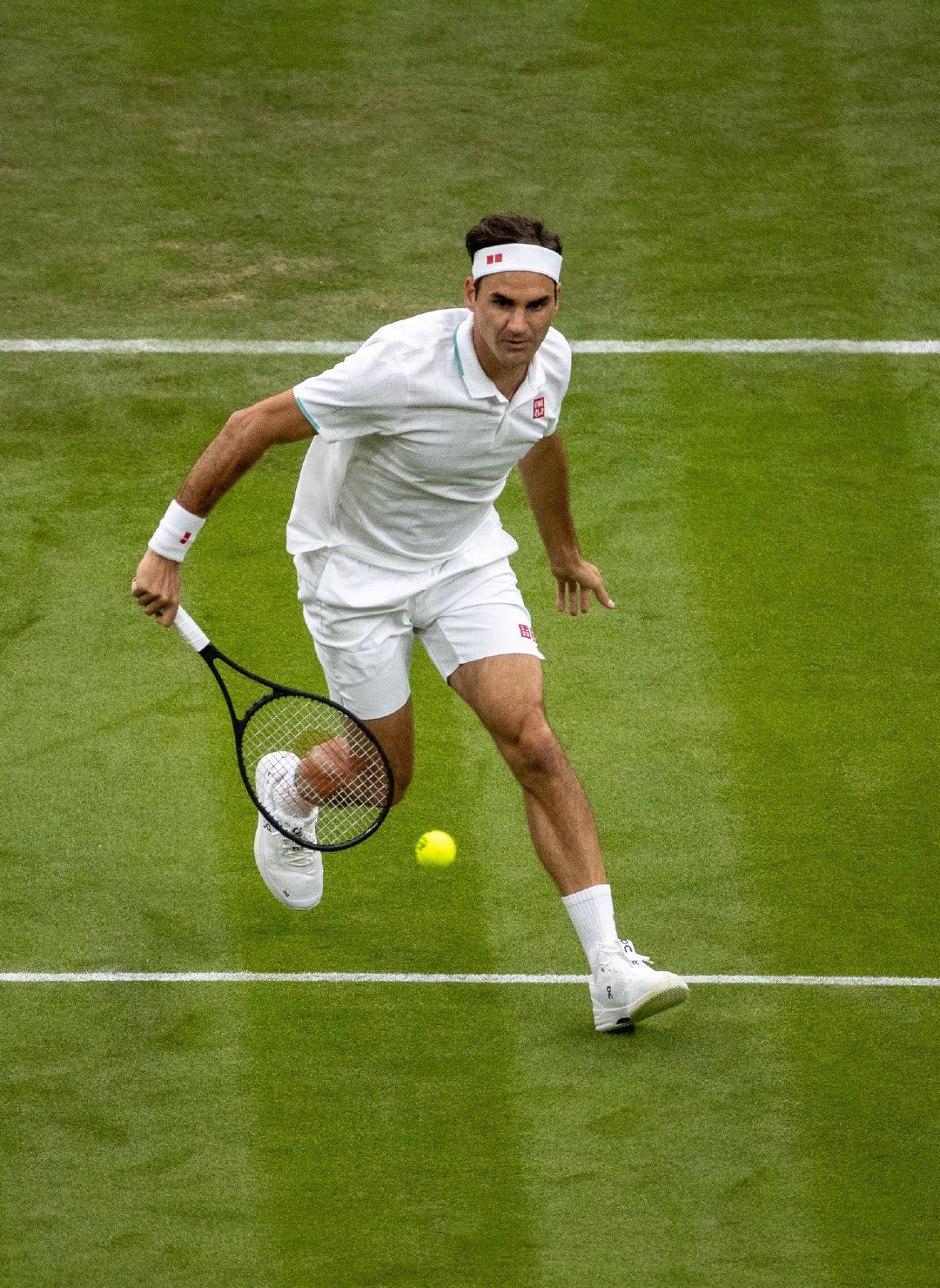 Federer won the toss and elected to serve. Mannarino, hoping to celebrate his thirty-third birthday with a huge win, looked set to receive an early gift as a poor start from the Swiss gave him a 0/40 window.

Federer needed to settle quickly, and he did so, saving all three break points and then holding to lead 1-0.

After failing to convert, Mannarino then had to save two break points himself to level for 1-1.

A more confident hold from Federer put him 2-1 up, and he soon had two more break points but could not seal the advantage.

Another quick hold moved him 3-2 in front, with the Swiss finding his feet on serve.

Mannarino then hit two double faults in his next service game but recovered to level.

Game seven resulted in another speedy hold, meaning Federer had won ten points in a row on serve, but the Frenchman continued to hang tough, holding to thirty for 4-4.

More of the same put the Swiss 5-4 in front, and in game ten, he came up with a flick of the wrist to set up two set points, converting the second with a backhand pass to take the set.

The second set kicked off with yet another comfortable hold, thanks to Federer winning 88% of points behind his first serve, highlighting that the first serves landed (just 52% up to that point) rarely, if ever, determines the outcome of a set or match.

Mannarino had to fend off deuce to level for 1-1 and then won two points in a return game for the first time since the opener.

From there, it was the Frenchman's turn to build some momentum, holding to love for 2-2 and creating two break points in the fifth game, but he was unable to convert.

No more opportunities were to come Mannarino's way in the set, but he was able to hold his own on serve, winning 96% behind his first delivery over six games as he forced a second set tie break.

Into the tie break and with Federer's forehand timing from the baseline missing, Mannarino moved up an early mini-break for 2-0, and despite handing it back, he was soon back in front with a double mini-break for 4-1 after more mistimed Federer forehands.

4-1 was quickly 6-1, and although Federer won his next two service points, Mannarino converted his first set point on serve to level at one set all.

The third set started with Mannarino pegged back to deuce from 40-15, but he held firm to lead 1-0.

An instant response was needed, and although Mannarino saved two breakpoints, Federer ramped up the aggression to break straight back for 1-2 before a speedy hold put him level at 2-2.

However, the momentum was short-lived as Mannarino held for 3-2 then broke Federer to love for a 4-2 lead thanks to some nifty returning.

Another comfortable hold put Mannarino up 5-2, and although Federer held for 3-5, he was not perturbed holding with a classic lefty serve out wide + volley putaway for two sets to one lead.

The fourth set started with Federer needing to save a breakpoint in his opening service game; buoyed from the hold, the Swiss could up his intensity, breaking to fifteen for 2-0.

Federer held to love consolidated the break for 3-0 and quickly turned that into 4-1 thanks to some more quickfire points.

The sixth game presented Federer with a chance to secure a double break, but Mannarino used his cat and mouse style tennis to escape for 2-4.

Midway through game seven, Mannarino slipped midpoint and hurt his knee. The physio was called, and after a brief stop, Federer held for 5-2.

With Mannarino looking subdued and unsure if his knee could hold his weight, he went into winner or miss mode, dropping serve as Federer took the set 6-2.

A retirement looked imminent, and although Mannarino started the fifth set, as soon as Federer won the opening point, a disappointed looking Mannarino knew he could not continue and handed Federer the victory.

It’s awful. It shows that one shot can change the outcome of a match, a season, a career. I wish him all the best and I hope he recovers quickly so we see him back on the courts. He could have won the match in the end. Obviously, he was the better player, so I definitely got a bit lucky.

You don’t get many walkovers throughout a career and you try also not to have it happen to yourself. It’s a reminder of how quickly it goes. But of course, I’m obviously happy I can get another chance for another match here. I worked very hard and in the end, I enjoyed myself out there today. It was great fun until the end, obviously. Federer on the circumstances surrounding his win.

A bittersweet end to this match and seeing an opponent have to retire is not good for anyone involved, especially not the injured party, but for both Federer and the fans courtside, it's always a bit awkward.

From Federer's side, he'll take it as it means he gets a second match on Thursday after being outplayed for large parts of this one.

Whereas Mannarino will leave London exceptionally disappointed that he slipped on the baseline when he was in with a realistic chance of recording a big victory in front of a Centre Court crowd, all on his 33rd birthday.

In terms of how the match played out, after saving the breakpoints in the opening game, I thought Roger played a decent first set, using the slice to force Mannarino to try to generate pace off his forehand, which worked well.

However, from the middle of set two, Fed slipped into a more monotonous play level, which allowed Mannarino to find his groove from the baseline.

Once he had the rhythm, he plays like the ball is on a piece of string, and he can work the angles brilliantly. His shots look like powder puff stuff, but with his takeback, it's hard to read where he's going and like Federer said, his shovel-like backhand bamboozles a lot of players.

That forced Federer into action, but he could not find that forehand potency, missing way too many of them, including four straight errors in the second set tie break.

The third set was more of the same, and his serve also tailed off, but in the fourth, something clicked back into gear, and he was able to play with more urgency and dictate play again.

Had the fifth being played and no injury had occurred, I would have made Fed a slight favourite given momentum. Still, with his level bouncing around from good to dreadful often within individual games, it wasn't a certainty, but I'd like to think his experience from that Falla match all those years ago would have paid off.

Federer is next up for fellow veteran Richard Gasquet after he defeated Yuichi Sugita in four sets over on Court 15.

Federer leads the H2H 18-2, and it's been ten years since Gasquet last won a set against him, so he has a huge mental edge going into the match.

However, most of Fed's matches so far have been a bit of a struggle, so it'd a surprise if it was the plain sailing we're accustomed to.

Gasquet has little to hurt Federer with, but he's got two Wimbledon semi-finals to his name, and I expect another close match with Federer winning in four sets.

What did you guys think of Federer's performance? Predictions against Gasquet? Let me know in the comments.