Roger Federer fended off the sledgehammer serving Jo-Wilfried Tsonga to progress into the last eight in Halle with a 7-6(5), 4-6, 7-5 win in 2 hours and 16 minutes.

The win sees the Swiss remain perfect in Noventi Open last-sixteen encounters as he moved into his 17th quarterfinal.

He'll next face Roberto Bautista Agut who came through Richard Gasquet earlier in the day for the loss of just five games. 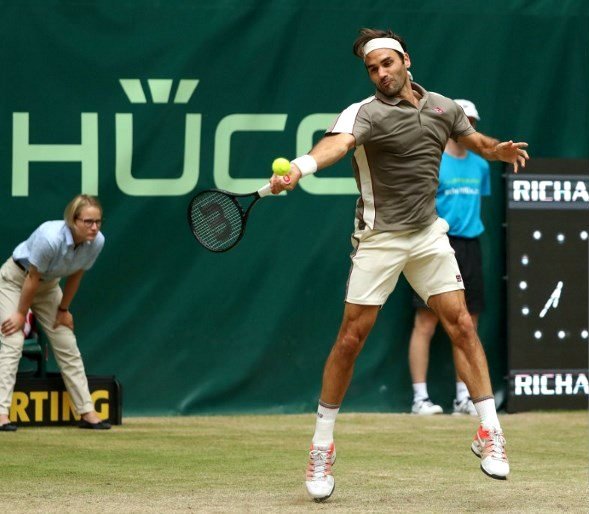 Tsonga won the toss and elected to receive. Roger kicked things off with a love hold but with Jo-Wilfried looking to mirror his serving performance from Wimbledon in 2011 he too got on the board with a love hold.

The pair then exchanged comfortable holds but it was Tsonga who made the first move in game five creating two break points, helped by a line judge correction at 0-15 which meant a replayed point that Roger lost. Roger erased them both to hold for 3-2

After another exchange of holds, a breakpoint came the way of the Swiss at 5-4 but a big t serve from Tsonga saved it to hold for 5-5 and we were soon into the tie break.

Into the breaker and Tsonga moved up an instant mini-break, getting Roger on the stretch with some heavy forehands.

That was soon 3-0, but Roger was able to get back on level terms, thanks to a slick half volley pickup on the forehand to level at 3-3.

Two points on serve then put Roger up 5-4 and a Tsonga second serve saw him run around it to fire the forehand to set up two set points.

Tsonga saved the first with his own serve but Roger sealed it with a heavy delivery of his own to take the set.

Into set two and Roger got off to the ideal start, exploiting Tsonga's lack of feel on the backhand slice to break for 1-0. A quick hold consolidated it for 2-0 and it looked as though Federer was well on the way.

However that all changed in game six when despite saving two break points to make deuce, Tsonga hit a stellar pass on break point and Fed couldn't control the volley as it drifted wide. Game on.

Tsonga then held for 4-3 and although Roger levelled to love, that was the last time he troubled the scoreboard as Tsonga reeled off the next two games to force a decider.

With the Frenchman's sledgehammer serve firing on all cylinders, a love hold put Tsonga up 1-0 in the third.

Roger then found himself in deep trouble down 0-30 but a superbly well-worked point at 15-30 averted the danger and he held for 1-1.

Tsonga quickly held for 2-1 and Roger was again in trouble at 30-30 after a shanked forehand but a tame backhand from Tsonga let him off as he held for 2-2.

More big serving put the Frenchman up 3-2 and game six brought perhaps the worst miss of Federer's career, hitting the ultimate Djokosmash at 30-30 to give Tsonga break point. Somehow he regrouped to force deuce and went onto hold for 3-3.

After game seven the roof closed and Roger kicked off the indoor session with a love hold for 4-4.

Tsonga, however, was still looking untouchable on serve and at five-all, a tie break loomed but Federer had other ideas, creating 0-30 out of nowhere then firing a sick backhand up the line for 0-40. Tsonga saved the first but he got his feet all wrong when back pedalling on the next point to dump a forehand into the net.

First serves were the order of the day for Federer but it was the 2nd serve that bailed him out of trouble at 15-30 when serving it out. 30-30 was quickly 40-30 and then an ace out wide sealed it. Allez! 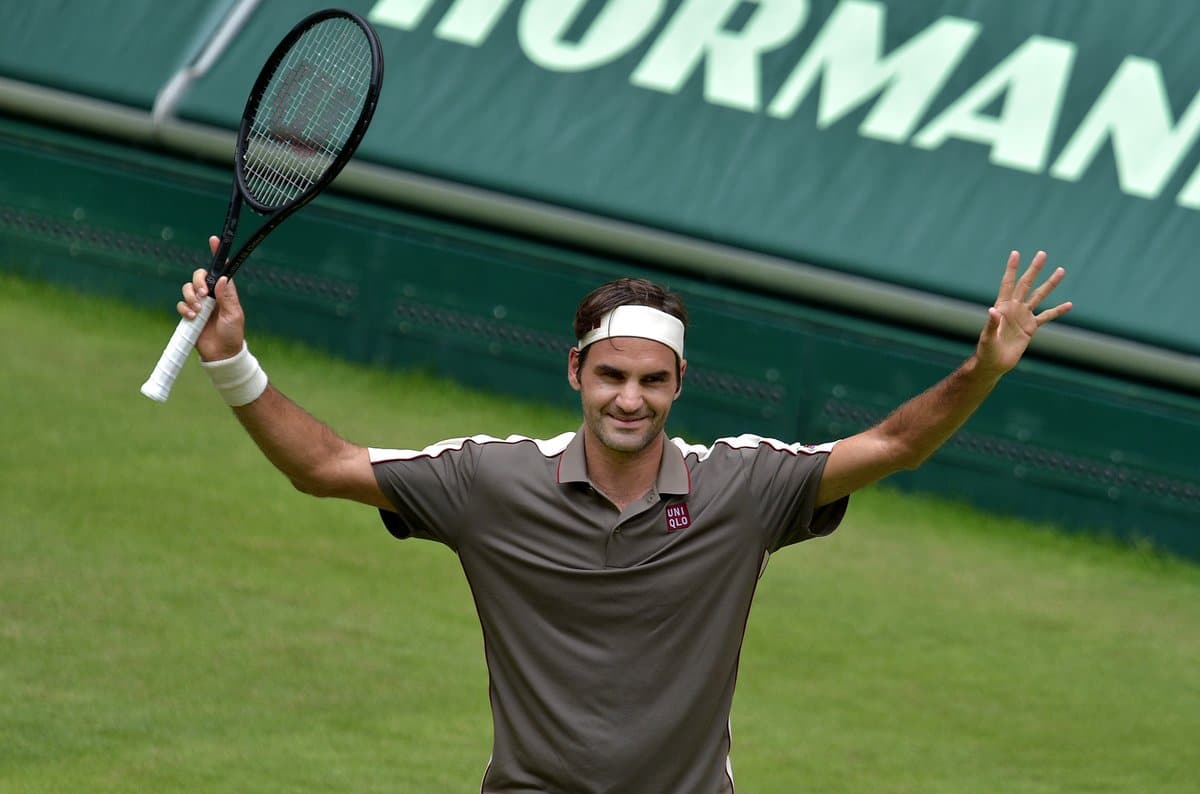 I thought I took some wrong choices on serve location. It was a tough couple of points to lose both at deuce when I came back from 15-40 but already in the game, I thought I was serving in the wrong locations and he made me pay for it. After that, I thought Jo was able to pick up his game, do better on the return and he got a great break to win the set as well. For me the key was to stay positive, I wasn't down in the score, it was even. Fought as much as I could, stay with him, he was really able to pick up his game. I always knew it was going to be tight, he's got a great first serve, chances to hit great forehands and he's dangerous throughout. I knew when I gave away the lead it was going to be tight. Federer on losing his break of serve and the second set.

A high-quality match from both players and one I had the pleasure of watching live. It's the first time I've seen Tsonga play live in quite a few years so I'd forgotten how heavy a ball he can hit.

The Frenchman is not hitting the fastest serves out there but it comes through the court with some serious weight behind it and he was able to outhit Federer throughout with 46 winners to Roger's 35.

Fortunately, what Roger lacks in Tsonga like power, he more than makes up for with feel, variety and understanding how to play the big moments. The 15-30 point in the second game of the third set sticks in my mind as it was so well worked, soaking up Tsonga's big licks and redirecting the ball to draw the error. Crucial!

Overall I'd say he got a little bit lucky to come through, winning 99 points to Tsonga's 98 but he played the big points well, didn't allow the fact his baseline game wasn't at it's most consistent and upped his game at the right moments. That was the difference between the two players on the day, Tsonga dumped a tame backhand at 30-30 in game three of the final set whereas Federer hit a clean backhand winner at 0-30 in game eleven 🙂

I think I played a really good first set tiebreaker, I was down in the score quickly, stayed calm, two good drive volleys, served well. He had chances, I had set point, so winning the set that way was crucial to settle the nerves.Federer on his win over Tsonga 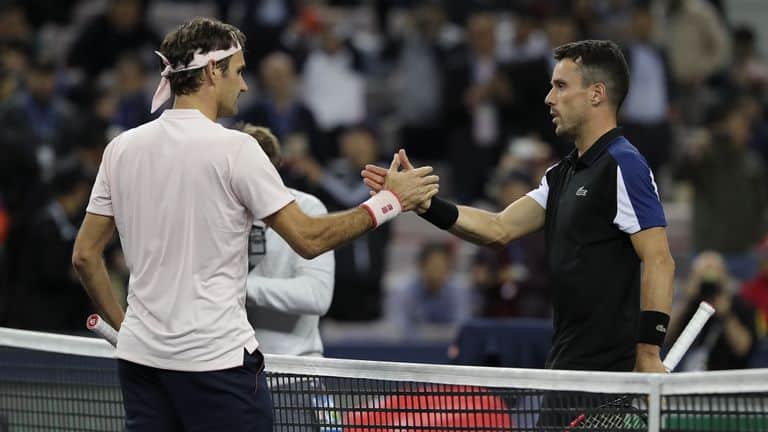 Next up is Roberto Bautista Agut who came through Richard Gasquet in straight sets. Unlike most Spaniards, Agut is completely at home on the grass with his flat hitting bringing him success with two fourth-round appearances at Wimbledon and the title at Rosmalen title in 2014.

Roger leads the H2H against Bautista-Agut 8-0 and the only time he has been able to take a set was last year in Shanghai. The two have met once before on grass at Wimbledon in 2015 with Roger winning in straight sets.

Given his record of being able to dominate Bautista from the baseline in their previous meetings, I like his chances to come through but he'll need to cut out some of the errors from the back of the court. Many of today's mishits were due to the quality of Tsonga's ball striking but Agut will make a lot of balls and return better than Tsonga so it could be another three-setter like their meeting in Shanghai. I'll be again watching courtside so hopefully, Fed can set up the weekend for me, time will tell 🙂

What did you guys think of the thriller in Halle? Let me know in the comments.