Many, including myself, had expected a routine victory for the Swiss and although it was ultimately a comfortable straight set win, Evans put up a real fight. The Brit was able to hold a 5-3 lead in the first set tie break and made every set competitive; showing exactly why he made the fourth round here two years ago beating Marin Cilic and Dominic Thiem in the process.

Ultimately though Roger proved just that bit too strong and more authoritative on serve when it mattered to come through unscathed and set up a tie with Taylor Fritz in Round three after the American defeated Gael Monfils in four sets, three of which were tiebreaks that could have gone either way. 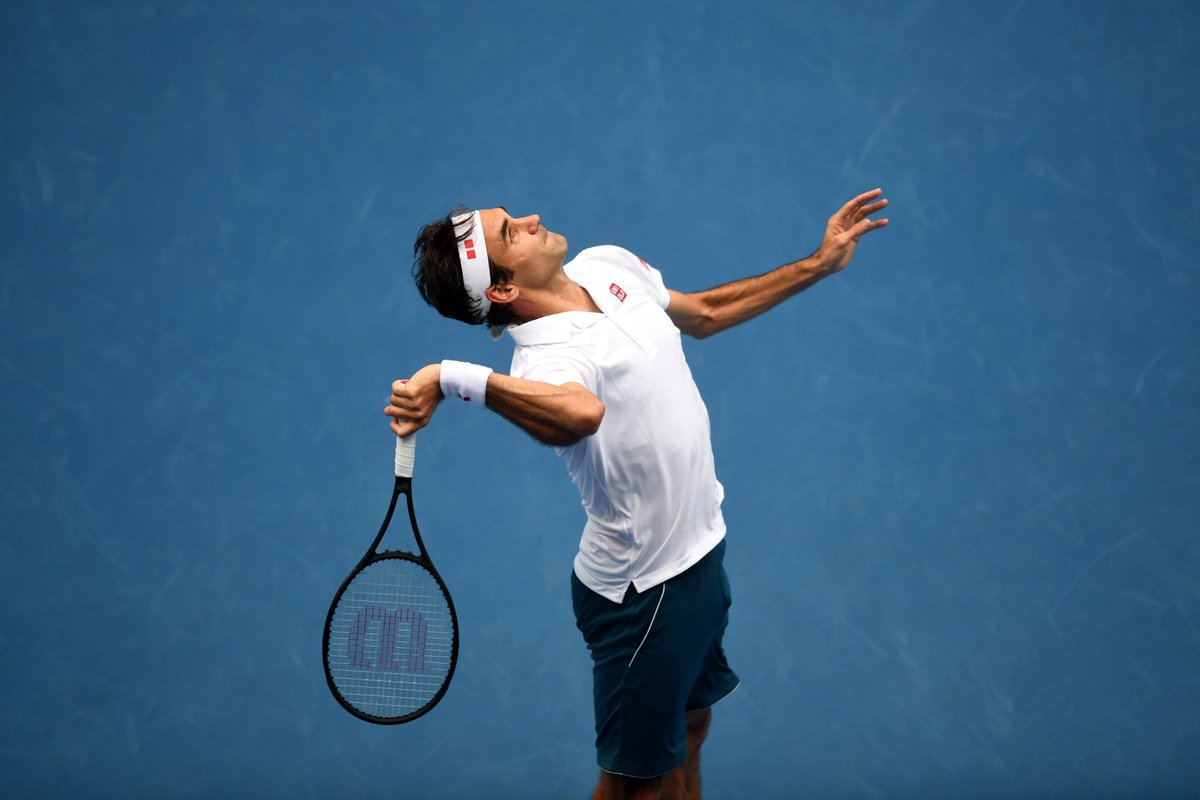 Evans won the toss and elected to receive. A hold to love put Roger up 1-0 before Evans responded with two aces en route to a love hold of his own.

The Swiss then had to recover from 0-30 to hold before Evans again levelled for 2-2. With Fed's ground game a little off on timing and the Brit's serve working well the pair exchanged more holds as the score ticked along to 4-4.

A minor rain delay halted play briefly with Roger leading 5-4 and Evans held on resumption. A love hold put Roger up 6-5 and although he'd been able to make inroads into his last couple of return games Evans saved a set point to force a tie break.

Into the breaker and Evans moved up a mini-break immediately. Roger recovered, winning both return points to lead 2-1. But the trend continued as Evans won the next two himself for a 3-2 lead. Roger again recovered the mini-break but faltered at 3-4 after a weak approach.

At 5-4 the set was on the Brit's racquet but a serve and volley attempt didn't pay off and he lost both points to hand Roger a set point which he converted to snatch the set.

At the change of ends, Evans received a brief medical timeout for a blister and he got off to a poor start in set two, falling down a break in game one. Roger then brought out the drop shots to test the effects of friction on Evans as he held for 2-0.

From there it looked like a comfortable set would ensue but Evans hit back, breaking in game ten after saving a set point in game nine. A hold then put the Brummie up 6-5 before Roger held to love for another tie break.

This time around it was the Swiss who started strong, moving up 3-0 with some solid play. That was soon 5-2 and another mini break saw him move up 6-3 as he took the set 7-3.

Into the third set and two love holds from Roger put him up 2-1 and in game four he managed to break serve from 15-40 down, aided by Evans missing a fairly easy putaway off a net cord that Roger managed to dodge as it sailed long.

The break this time proved decisive and a love hold consolidated it for 4-1 as the Swiss went to serve it out with no issues, taking it 6-3. 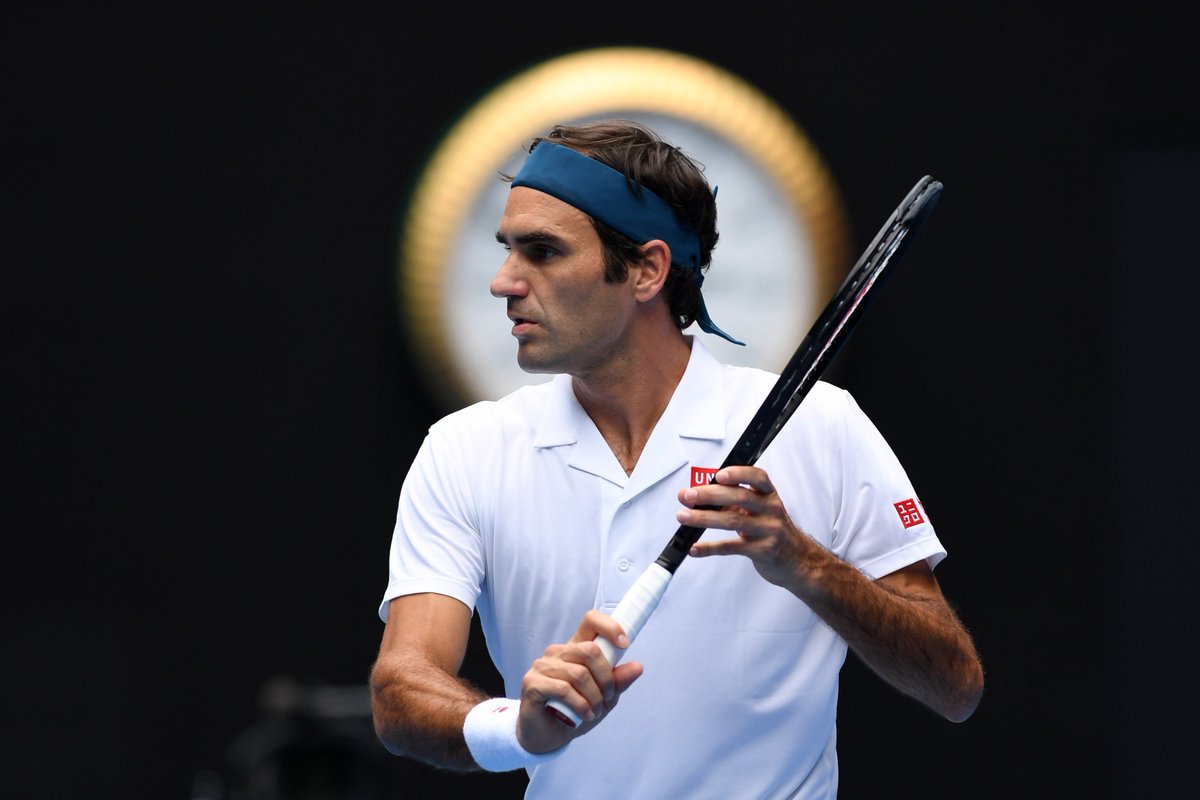 I have high regard, you know, in Dan. I think he's a good player. I've seen him play some really good matches over the years. I see why he can cause difficulties to players. He's got a nice slice, defending the court well. He has the variation, which is always a hard thing to play against. He was feeling it today, I thought. He was very sort of cat and mouse a bit. Very interesting. I liked the match. I thought he was playing well. It was enjoyable, yeah.

A tough and fun match here for the Swiss Maestro as he faced a tricky opponent who played at a high level throughout.

I was expecting a tight opening set and then Roger to pull away but Evans had other ideas, making just 14 unforced errors and serving at 61% to make it competitive from start to finish.

The good thing is though Roger actually enjoys playing against this type of player as it's somewhat of a throwback in style.

As he said in his post-match on-court interview, it's in some ways like playing a mirror image of himself with a lot of slicing, only he has a height advantage and a more effective serve.

So rather than get frustrated by Evans slicing and dicing, he embraces it and I thought he played a very clean match serving at 63% and firing 56 winners to just 17 unforced errors.

With no sets dropped, I'm not sure you can really ask for more, it was his first-day match in a while and in fairly cool conditions his timing was a bit off in the first set but it only got better as the match wore on.

Obviously, he got a bit lucky in the key opening set as Evans had it on his racquet but he took advantage and from there it was never really in much doubt.

As for Evo, I've always liked his game, and he serves big to say he's not a tall guy. He has a lot going for him so hopefully, he can back up this performance with a good run at some of the smaller events he'll be playing next and get back into the Top 100 with a view of cracking the Top 50. 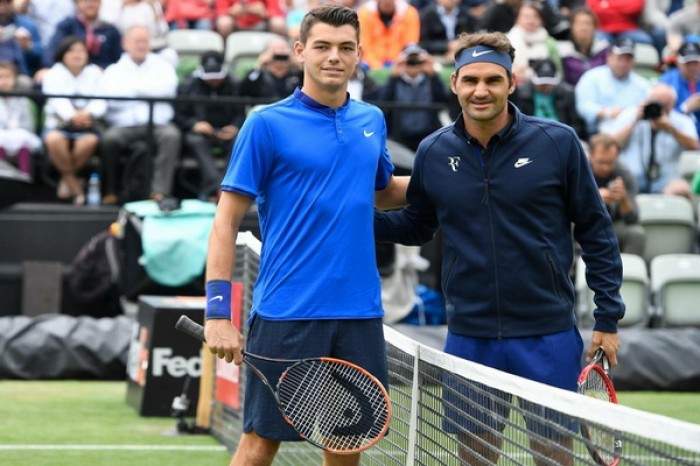 Next up is Taylor Fritz who beat 30th seed Gael Monfils in four sets in a match that lasted over 3 hours. The American is one of the ‘Next Gen' players and showed a lot of promise as a junior.

Since he turned pro in 2015 he's not had a huge amount of success since making the final in Memphis in what was only his third ever ATP event but he put together some decent results at the back end of last season and looks to be improving again.

Roger leads the H2H 1-0 with his win coming in Stuttgart back in 2016. The two also practised together at Wimbledon in 2015 so he at least has some familiarity with his game.

Fritz is the quintessential baseliner, he serves big and hits hard off both wings. That's about it so if Fed is on anywhere near his A game he should have too much in his arsenal.

I think the surface will suit Fritz's game of hitting fairly hard and flat so he'll likely make it competitive but if Roger doesn't get pushed back too far and too often I like his chances of coming through comfortably.

What did you make of the match against Evans? Predictions vs. Fritz? Let me know in the comments.