Roger Federer is into the Quarter Finals in Madrid after digging deep to save two match points for a 6-0, 4-6, 7-6 (3) win over the enigmatic Gael Monfils.

The three-time former champion looked set for a routine day at the office after winning the first set 6-0 in just 18 minutes, but Monfils bounced back with some heavy hitting, breaking Federer early in the second set to force a decider.

The Frenchman was in control at 4-1 in the third set and despite failing to hold onto his advantage had two match points to seal a fifth career win over Federer.

However, Roger showed his composure to hold serve, and he produced some solid tennis in the tiebreak to book his spot in the last eight. 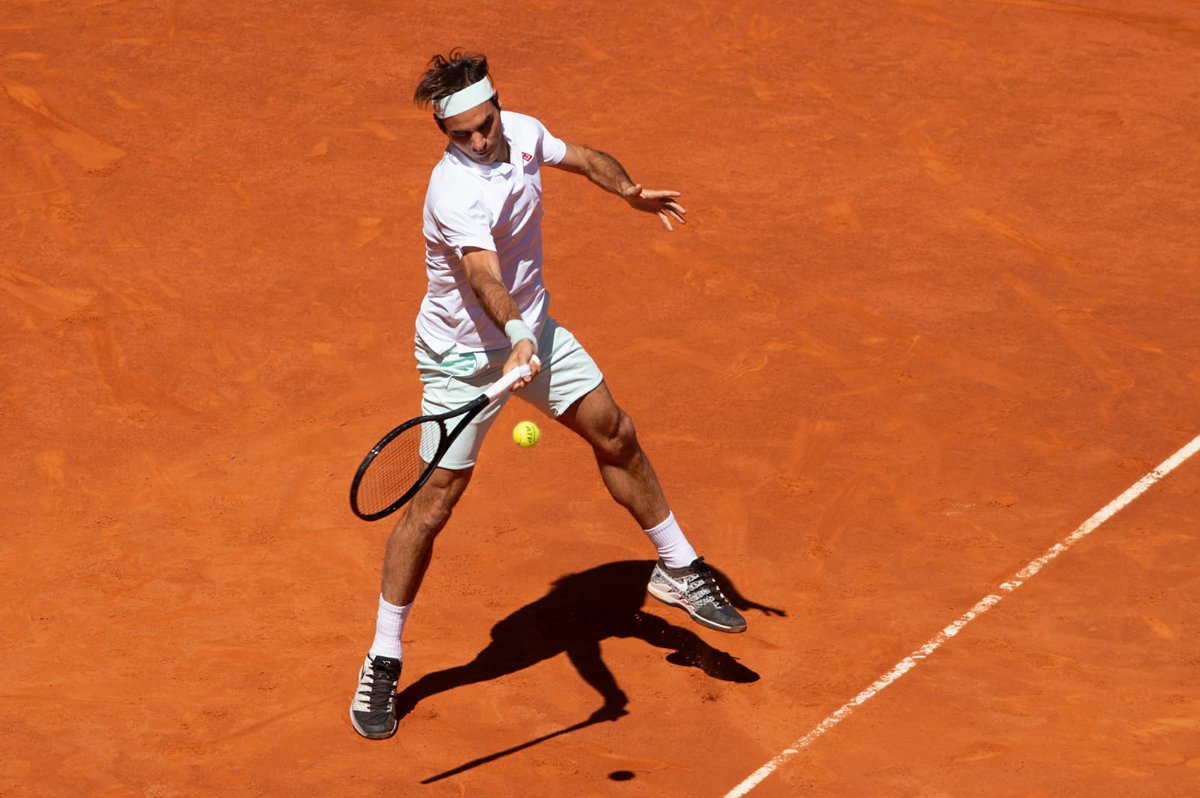 Federer won the digital coin toss and elected to receive. Monfils had made a terrible start in his match against Fucsovics yesterday and that trend continued as four unforced errors handed Roger the break.

The Frenchman is leading the league table for % of return games won in 2019, so it was no great surprise to see him fashion two break points back, but Roger recovered to lead 2-0.

That was quickly 3-0 thanks to more baseline hugging play from Roger that rushed Gael into making mistakes.

A hold to fifteen put Federer up 4-0, and he broke for the third time en route to bageling Monfils to take the set 6-0 in just 18 minutes.

Like I said in my preview section of the Gasquet match recap post, you can never predict how Monfils will play, and in set two he cranked up his crank groundstrokes to turn the tables; quickly moving into a 2-0 lead.

Gael consolidated the break and was soon into a 4-1 lead, but Roger was able to recover, aided by a Monfils double fault on break point in game seven.

A love hold saw Roger level at 4-4, and he then had a break point for 5-4, but Monfils dug in to hold. That gave Monfils a surge of energy, and he was able to break for the second time in the set to take it 6-4 and force a decider.

With Gael's weight of shot doing damage, he continued to pepper Federer's backhand to break for 2-0 in the third.

A visibly annoyed Federer then launched a ball into Row Z and received a code violation. He then asked the umpire if the roof could be opened more due to the shade causing him visual problems on the court, but it wasn't possible.

Despite looking unfocused, Roger held a break point in game three but couldn't convert as Monfils held for 3-0. That was soon 4-1, and the Frenchman was firmly in the driving seat.

However a love hold from Federer gave him some momentum, and on the first point of the return game, he produced a huge forehand to win the first point. A breakpoint followed at 30-40 and a pinpoint down the line slice return left a serve and volleying Monfils in no man's land.

A hold to fifteen put Roger level at 4-4, and the pair then exchanged holds for 5-5. Like the second set, Roger again had a breakpoint at the death, but Monfils produced the goods to hold for 6-5.

With the pressure on Federer serving to stay in it, he followed a peRFect volley for 30-30 with a poor one to give Monfils a match point. A brave serve and volley behind his 2nd serve saved it, and the Swiss had to save a second before holding to force a tie break.

Into the tie break and Gael's wobbly second serve saw him double fault on the opening point. Roger took full advantage to lead 3-0 and was soon up a double mini-break for 4-1, maintaining his lead to take it 7-3. 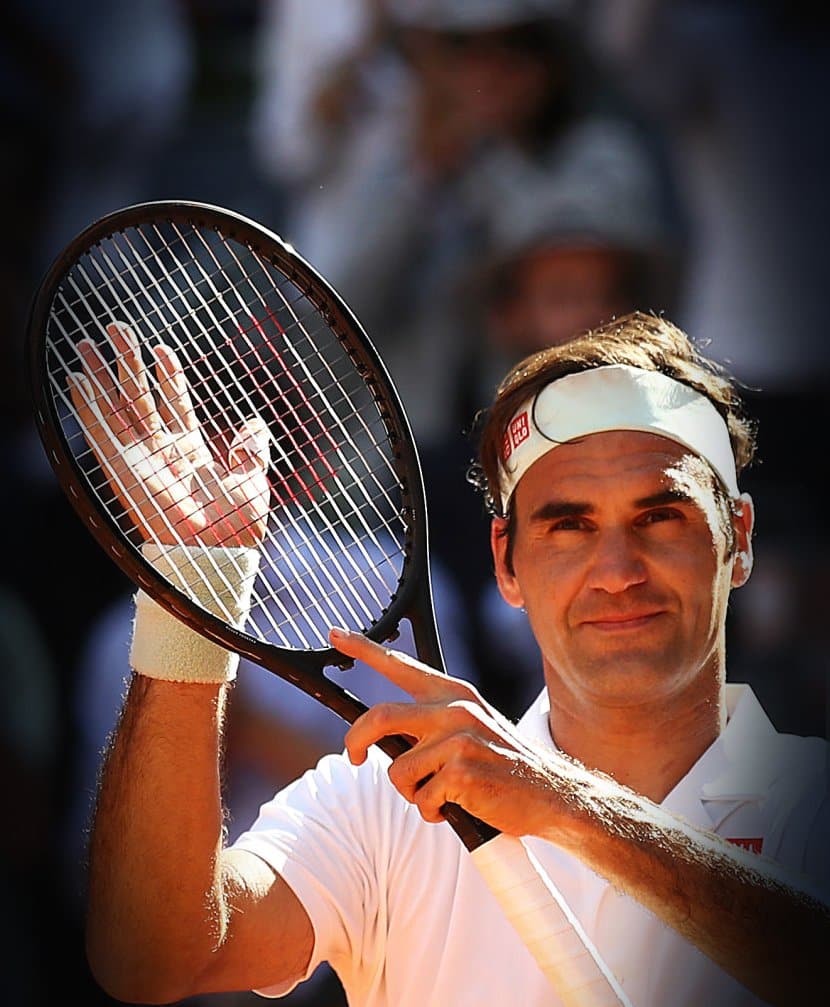 I think Gael did a nice job of not being frustrated after losing the first set and he learned from yesterday when he also lost the first set 6-1. So I think that helped him to stay calm. I tried to keep it going but it was difficult. I had a tough run of losing five games in a row at the end of the second set and the start of the third. Going down 3-0 and 4-1, it wasn’t looking good for a while but I hung in there like he did and it got decided in a tiebreaker. It was a highly stressful moment for me but I played a great tiebreaker, served well and mixed it up nicely so I’m very excited I was able to come through the match somehow. Federer in his post match interview

A fun match this one and I think it gives a good indication of what to expect from Roger on clay: he's going to find it tricky against heavy hitters who can get it up high on the backhand, but he won't go down without a fight and will stick to his guns until the end whatever happens.

Monfils was always going to pose more of a threat than the hobbled Gasquet, and I think the match was a good one for Roger as it was a tough workout.

Playing 18-minute blow out sets wasn't why Federer played on clay, so a tricky three setter is ideal and will have given him plenty of information as to where his game is at.

I know a lot of fans think Roger's decision to play clay is purely “because he is going to win Paris” but that's not Federer's main aim.

He said as much in the press earlier this week, revealing that a big part of his decision to play clay was to work on his fitness in the longer rallies. In fact Roger specifically referenced disappointment at not being able to handle the heat in New York which he partly attributes to lack of grinding out longer points earlier in the season.

You can see his full quote below:

This was more about preparing for extended rallies which I knew I wanted to work on because of the problems I had at the US Open with the heat. I just think a lot of things led to that problem at the US Open. I had a stiff back, I guess, from sort of post-Wimbledon until I end up pre-season as well a little bit and because I have been on the hard and grass courts for so long, rallies were always on the shorter side, I’d say, especially since Cincinnati anyway and it was mild and I had a desire to work again especially in fitness because the matches didn’t allow me to extend the rallies as much, you know, to work on playing longer points and that, obviously, is what you need on clay maybe. We’ll see. Maybe it will be just one game in Paris and it was all for nothing. Still, I think it helps for any surface, you know, to be really tough when the rallies go long. And I feel very strong right now. And obviously, we worked on that in December already. Federer on why he chose to play on clay

Based on the above, win or lose today the match was always going to be a good one. It just so happens to be even better because he won it in a third set tiebreaker and produced some quality tennis throughout. Plus he maintained his 90-0 W/L record when he bagels an opponent 🙂

Next up is Dominic Thiem who had an impressive win against Fabio Fognini in what I hear was a high-quality match from both players.

Thiem is the form player right now, and he's made back to back finals in Madrid, so I think he heads into tomorrow's quarter-final as the favourite.

The Austrian has the power and the spin to cause Roger a lot of problems and Roger's three sets today might have taken a little bit out of him, so I expect Thiem to come out on top.

Much will depend on how Roger starts the match; if he's able to time it sweetly from the off and take it early from the baseline to take control in the first set, then he gives himself a fighting chance. That forces Thiem to produce the goods from behind, he managed it in Indian Wells, so we shall see what happens tomorrow. Should be a good one!

What did you guys think of the win against Monfils? Predictions against Thiem? Let me know in the comments.