Roger Federer's bid for an 8th Western & Southern Open is up and running as the Swiss defeated Juan Ignacio Londero 6-3, 6-4 in a rain-affected match.

The Swiss came through in 61 minutes, winning 17 of 21 points at the net and facing just a single break point as he won 81% of points behind his second serve to move comfortably into Round 3.

Federer will next play Stan Wawrinka or Andrey Rublev with the two playing their second-round match later today. 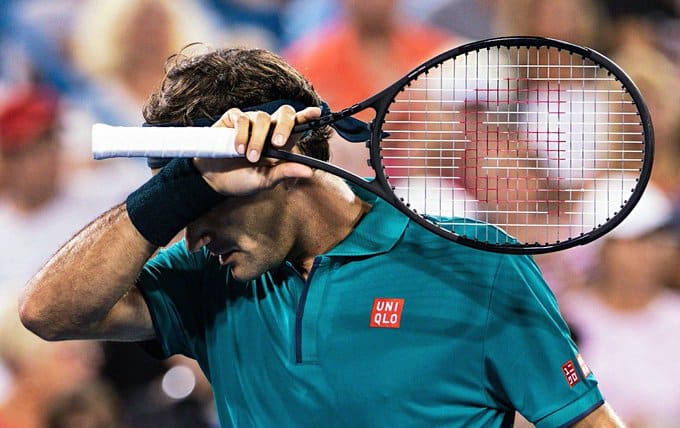 Londero won the toss and elected to receive. Federer kicked off with a hold to fifteen, sealing the game with an ace for 1-0.

A double fault for 0-15 wasn't the start the Argentine wanted and at 15-40 he double-faulted again to drop serve. Roger consolidated for 3-0 and the set was soon over in just 21 minutes.

Into set two and Fed created thirty all in Londero's first service game but a tame backhand allowed this year's Cordoba Open champion to hold for 1-0. The Swiss levelled to love and after another exchange of holds, play was suspended after the rain started falling.

Play resumed just over an hour later with the score at 2-2, 15-15 and Roger started quickly, holding a breakpoint at 30-40 which was saved but he converted his second, correctly challenging a Londero second serve to lead 3-2.

A slick two-handed half volley pick up then saw Roger save a breakpoint of his own to lead 4-2 and in game ten the Swiss held match point. Londero saved it but Fed served it out 6-4, hitting a slick run around forehand at thirty all and then firing in a body serve to take it.

I'm very happy. I thought it was tricky with the rain delay and everything, but I’m happy to be back on the courts. It’s totally different from the grass courts and the clay courts we have seen, so this is the beginning of a long, long hard-court swing. So it’s nice to start off with a win. Conditions are fast. We barely had any rallies in the first set. It was just bang-bang tennis. He had a good forehand. He hides it well with the grip, and because I have never played him before, it's hard to see the release happening. I think he actually can play very well on the faster hard court. He moves well, can take the ball early. He has the option to go back, but maybe here it's just a tad too fast. Federer on his win over Londero

A solid win here for Roger in his first match back post-Wimbledon and I liked what I saw. Londero had a good win against Berrettini in the first round and is having a decent season but Roger prevented him from playing his style of tennis and with double faults gifting both breaks of serve it was a routine win.

There was just one point over 9 shots in the match and Fed won 42 points under five shots to stop Londero from getting into a nice rhythm and extending points. Roger's first couple of shots were always doing damage and in what he said were fast conditions he was able to use that 1 + 2 punch combo to stay in control throughout.

The other big positive was his success coming forward, winning 17 of 21 at net, including a two-handed shovelled half volley 😆 so I like his chances to make the latter stages if he keeps that explosiveness and is able to ghost in whenever he spots the higher lofted ball off his opponent's strings.

Next up is Andrey Rublev after he defeated Stan Wawrinka in straight sets.

The Russian came through qualifying and beat Basilashvili in the first round so is on a solid run here in Cincy.

Federer has never played him before and I'm not sure if they have practiced together either so he's a bit of an unknown for the Swiss.

However I'm sure he will have seen Rublev play when he made the Quarter finals in New York two years ago and have some idea of how he plays, which is to throw the kitchen sink at his groundstrokes especially the forehand.

It's an extremely dangerous shot when on, but it can leak errors which is why you see his results fluctuate wildly and he's lost in qualifying in five of his last ten tournaments. However, he made the final in Hamburg beating Thiem along the way and was closing in on the top 20 before his back injury in 2018.

With Rublev's style I'm expecting a tricky match for Roger but if he's explosive and able to get the Russian rushing his shots then I like his chances.

What did you guys think of the win against Londero? Predictions against Rublev? Let me know in the comments.