Routinerer. Another total cruise match from Roger as he beat German Bjorn Phau 6-2, 6-3, 6-2 to move seamlessly into the third round of the US Open.

The good news is that Roger is looking very solid so far, his opponents so far haven't been great but he's got the job done and only spent 3 hours on court in 2 matches. The bad news is that when Roger wins without having to really do anything there's little to blog about!

Like the Young match on Monday this was very one sided, Roger got out the blocks fast, served well from the off and once he got into the lead never looked back.

He served impeccably well and once he had a firm grip of the match he made a lot of moves to the net both transitioning and volleying very well. He made 68% of first serves and won a very healthy 32 of 47 points at the net, which over 3 sets (25 games) just shows how often he came in.

I was very impressed with how authoritative Federer was with his volleys too, sometimes he can try be a little casual or too cute but he was moving in quickly and giving himself time to set and pull the trigger so he could hit firm and deep leaving Phau no chance.

I said in my prediction that I thought Phau would get close in at least 1 set but that wasn't the case at all and he made little to no impact. I think really he played way too defensively and allowed himself to get pinned down behind the baseline. It was doubtful he was ever going to get anything out of the match anyway but maybe if he'd gone for broke a little more he'd have more games to his name on the scoreboard. Really the only impressive thing he brought was his foot speed as he was able to track down a lot of balls and drop shots but in the end Roger just had too much power, too much nous and too much guile. Pretty lethal combination. 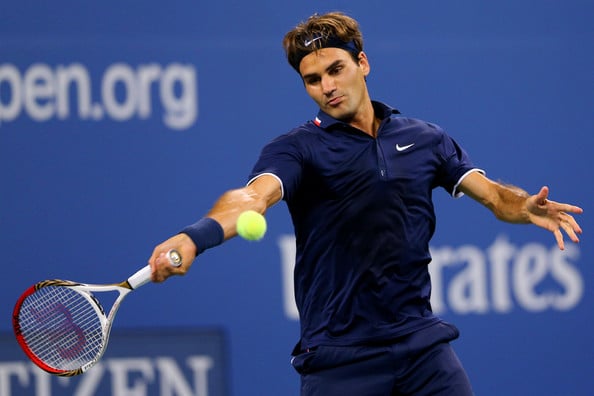 As for Fed I thought he played really well and looked very solid. He's held 73 of his last 74 service games which is an incredible record and now is 23-0 in night sessions matches at the US Open. Like the Young match not a lot happened early on but in the third set both guys came up with some awesome shots to please the crowd. Roger hit two immense backhand smashes (hardest shot in the game) and then Phau pulled off a backhand from a Federer smash that required great anticipation and racket head control. It was pretty similar to the one Fed hit against Roddick in 07 at the AO just not as good ;). And of course we got a Sampras esque slam dunk:

Great opponent who was also ready to do some shot making,” said Federer. “It's a long time, it was obviously going to be fair, tough, and nice. But I enjoyed it, like I always do, particularly the night sessions here in New York.

Couple of upsets but so far it's gone as planned, Djokovic has looked very solid in his first 2 rounds but he's played mugs so far so impossible to read into it too much. Although it's good for him as it's meant he's spent almost zero time on court so he's going to be fresh for the second week. Murray has also been impressive since he looked a little shaky against Bogomolov. He beat Dodig easily and apparently looked good, I've not seen any highlights although I heard some commentators saying they weren't impressed with Dodig and all he did was hit a few good shots but then followed it up with really poor play.

The biggest loss so far was Tsonga losing to Martin Klizan in 4 sets, guess it just sums up Clownga really in that sometimes he's amazing and other times he stinks it up pretty bad and doesn't have that ability to win matches where he's not at his best. He won the second set 6-1 then lost the third 6-1. Trading breadsticks is crazy really and it now means Murray has a good route to the SF.

Finally Roger got a day session match against Spaniard Fernando Verdasco and he's the third match on Arthur Ashe with play starting at 11.00am.

Roger leads the H2H 4-0 and has only dropped one set at the 2009 World Tour Finals. They've met once on an outdoor hard court and that was again in 2009 in the quarter finals of Indian Wells. Fed won that in two closish sets. I think that match is probably a telling one because after the 2009 Aus Open final Roger went on a mini slump on the hardcourts and early clay events before turning it round in Madrid. Yet despite playing poorly he still got past Fiasco pretty easily. And 2009 was Verdasco's best year on tour by a country mile making the semi's in Aus and qualifying for the WTF.

When a Slumping Fed vs. Peak Verdasco = Fed still winning you have to think when Roger is playing some of his best tennis this year then this US Open 3rd round is going to be a straight sets victory for. I can't see Verdasco doing too much damage on Fed's serve and when he's under pressure he often serves a lot of double faults so I think that will factor. Verdasco is capable of pulling off some shots when he get's going but I think that's unlikely and I see Roger getting the job done in straights 6-2 6-4 7-5.

Outside of the draw/completed matches the big news was Roddick announcing he would retire after the US Open. I wasn't expecting it this soon but I always knew it was imminent as he's been slumping since 2009. I think he's done it with good timing and is able to leave the game on his terms. If he kept on losing to outsiders and struggling to beat lesser players then he was only going to tarnish what has been a pretty good career.

I reckon Roddick will be missed for his antics/umpire abuse/pressers and generally been a good ambassador for the game. The good news is for his fans and himself is that he's still in the tournament after demolishing Bernard Tomic in straight sets including a 3rd set bagel. That was a pretty big win for Roddick considering the circumstances, I'm not sure if the occasion got to Tomic (I heard MacEnroe say he wasn't trying?) but it now means Roddick can play on Sunday which will be another electric match I'm sure. I can't see a fairy tale ending but should make the 4th round which would be a good showing.

I will probably make a post on him once he exits the US Open as he has been on tour with Fed since the beginning and they have shared a lot throughout their careers so I have a bit to say on that.