Roger Federer is into his 13th Indian Wells quarter-final making serene progress with a 6-1, 6-4 victory over Kyle Edmund in 1 hour and 3 minutes.

The Swiss took advantage of a nervy start from the 23rd seed breaking twice in the opening set to assume full control and he never looked back. The Brit missing three chances to get back on serve proving the deciding moment and he was unable to convert on any of his seven break points during the match.

The win sees Roger set up another first-time encounter with Hubert Hurkacz in Friday's quarter final. 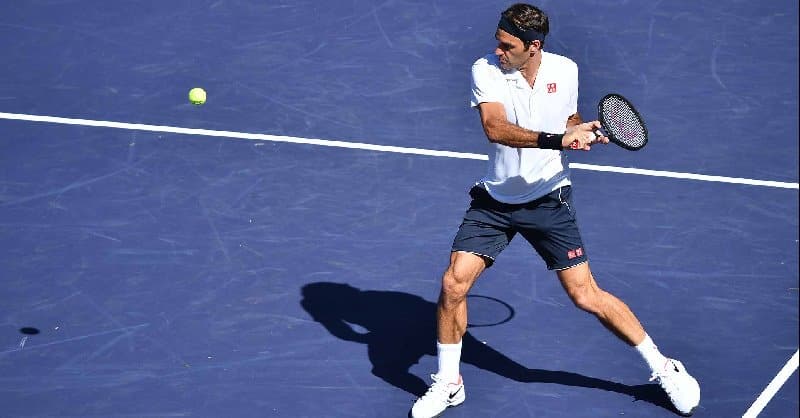 Federer won the toss and chose sides. Edmund chose to receive and Roger held comfortably to fifteen for 1-0.

It was important for the Brit to get off to a solid start but back to back double faults then an unforced error gave Roger 0-40. Kedders saved two of them but a big inside out forehand gave Roger the break.

The Swiss then slipped to 0-30 after Edmund fired off a 95 mph forehand and last weeks Indian Wells Challenger winner had an immediate chance to break back at 30-40. Roger saved it but had to save two more before finally consolidating for 3-0.

With Edmund no doubt ruing some of his shot choices on the three break points he was soon down a double break at 0-4 and Roger breezed to 5-0 with a love hold.

The British Number 1 finally got himself on the board with a hold for 1-5 but Roger was cruising, holding to 30 to take the opener 6-1 firing 13 winners.

Edmund, on the other hand, had only won 8 points on serve and hit three double faults in a set he'll want to forget.

Into set two and Edmund kicked off with a morale-boosting hold for 1-0 but couldn't make any inroads on the return as Roger quickly levelled at one game apiece.

A love hold then put Edmund up 2-1 and he'd finally started to find a bit of consistency from the baseline but in game five he faltered, slipping to 15-40 when Roger used the slice then injected pace on the forehand before breaking for 3-2.

A slick drop shot helped the Swiss hold to love for 4-2 but in game eight he found himself under pressure facing a breakpoint at 30-40 after Edmund went big down the line with a backhand. Roger saved it and held for 5-3.

Edmund then held to force Roger to serve it out and had multiple chances to get back on serve, setting up two break points at 15-40. Roger erased them with a big first serve and a smart second serve. Kyle then had a third chance to restore parity but couldn't take it and Roger sealed it 6-4. 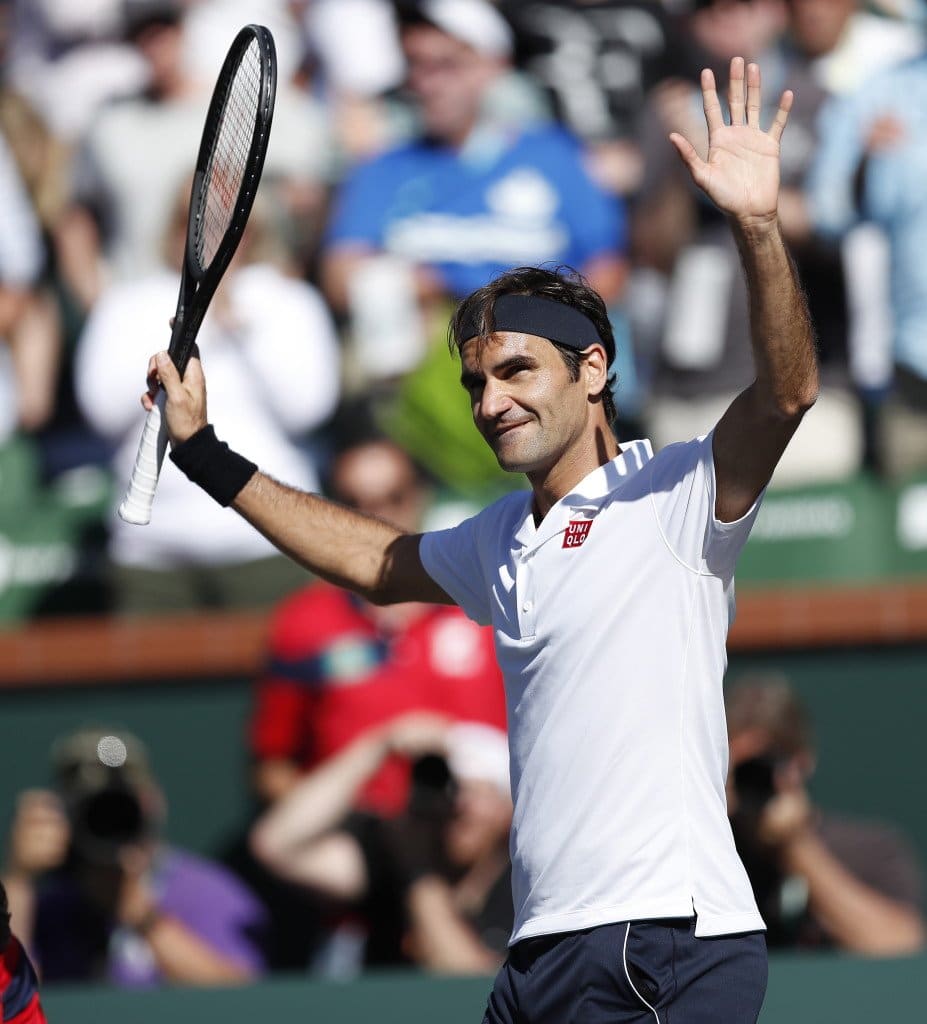 He didn't have the best start, so that cost him the first set. The second set, it was definitely better. I think he probably struggled throughout a little bit. He never really got going. Conditions are tough with the glare, and the jump of the ball is sometimes hard to find the rhythm and timing. Being able to belt the ball like he does need either a good start or good conditions, and he didn't quite find that. I'm sure I profited a little bit from it, but again, I was able to keep him uncomfortable throughout the match. He's got everything in the game. It's just a matter of keeping improving, keep plugging away, and then he will make big results again. He knows that.

Another slick performance here from Roger who was able to dictate play from the outset and freewheel through the match with the peRFect blend of well-struck groundstrokes, variety and moving forward when he had the chance.

It's always interesting to see Roger play guys for the first time as you just know his opponents have never faced the type of tennis that he produces. Federer's unique game style combined with his achievements often causes opponents he has never played before struggle in the first few games. That was certainly the case today as Edmund looked way off the pace early doors and Roger was just one step ahead of him.

The Brit got off to a disaster start on serve with two double faults and before his legs had even started working he was down 5-0.

It's a long way back from there in the best of three format and I'm pretty sure he will walk off the court feeling like he was only out there for 10 minutes as everything happened so fast.

To his credit, he did step it up in the second set and will feel like he should have got the ball in play on some of the breakpoints (0/7) but ultimately Roger was too good on the big points and cruised through into the Quarters.

Other than that, great gameplan and his execution has been spot on so far this week. A couple of loose moments on serve and 7 break points looks a lot but you never felt like he was in too much trouble and I enjoyed his forehand tonight. Especially moving forward when he'd mixed up the pace and caused Edmund to mistime it so he could pounce on the half court ball and come in behind it. 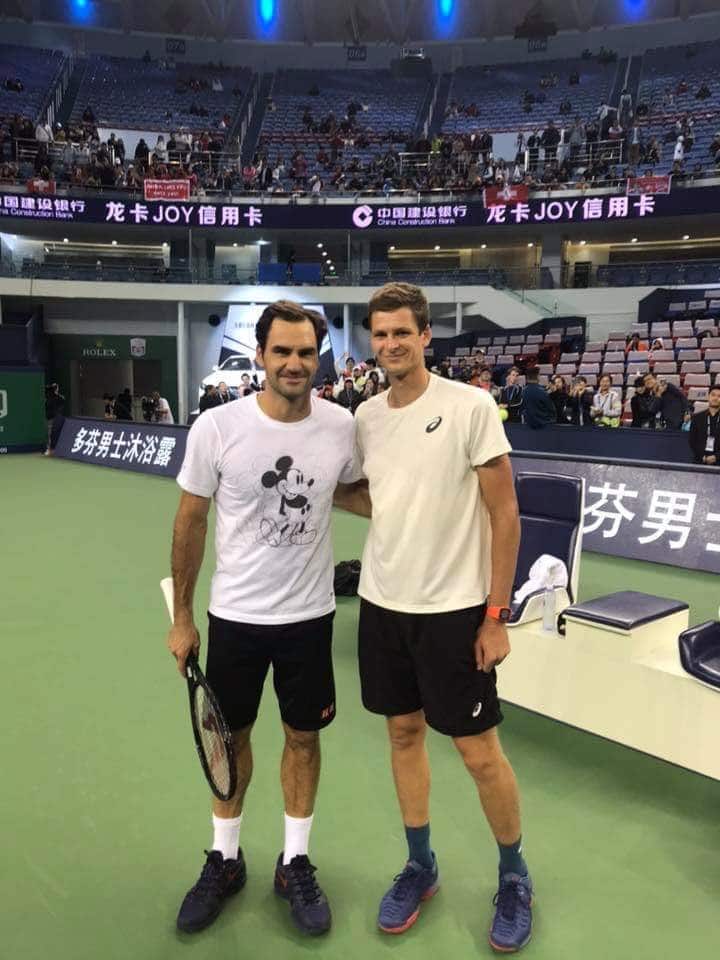 Next up is another man Feder's hasn't played before, Hubert Hurkacz. The Pole has been on a great run this week defeating Pouille, Nishikori and Shapovalov to make the Quarter Finals.

Up until last week I'd never seen him play but I caught some of his victory against Nishikori in Dubai and he was very solid. A Big serve paired with accurate groundstrokes are the foundations of his game and he looks to be a decent mover for a tall guy.

Not much variety which is standard fare for most players coming through but he will make a lot of balls. Is that enough to trouble Fed?

Doubtful as Roger has looked ultra offensive this week so if he takes the game to Hurkacz I think he'll cause him too many problems.

His return doesn't look that dangerous either but even though Roger practiced with him last year in Shanghai he's a bit of an unknown quantity so we shall see.

What were thoughts on the Fedmund match? Predictions against Hurkacz? Let me know in the comments.