Roger Federer is through to round 2 at Flushing Meadows after overcoming a dreadful start against qualifier Sumit Nagal to progress 4-6, 6-1, 6-2, 6-4 in two hours and 30 minutes.

The win means Federer has qualified for the Nitto ATP Finals and also maintains his first-round match win streak in majors which is now at 62 dating back to 2003.

However, it wasn't plain sailing from the Swiss as Nagal took advantage of a dire first set to get in front but couldn't stretch his lead once Federer had cut down his unforced error count.

Next up for Federer is Damir Dzhumur after the Bosnian saw off qualifier Elliot Benchetrit also in four sets. 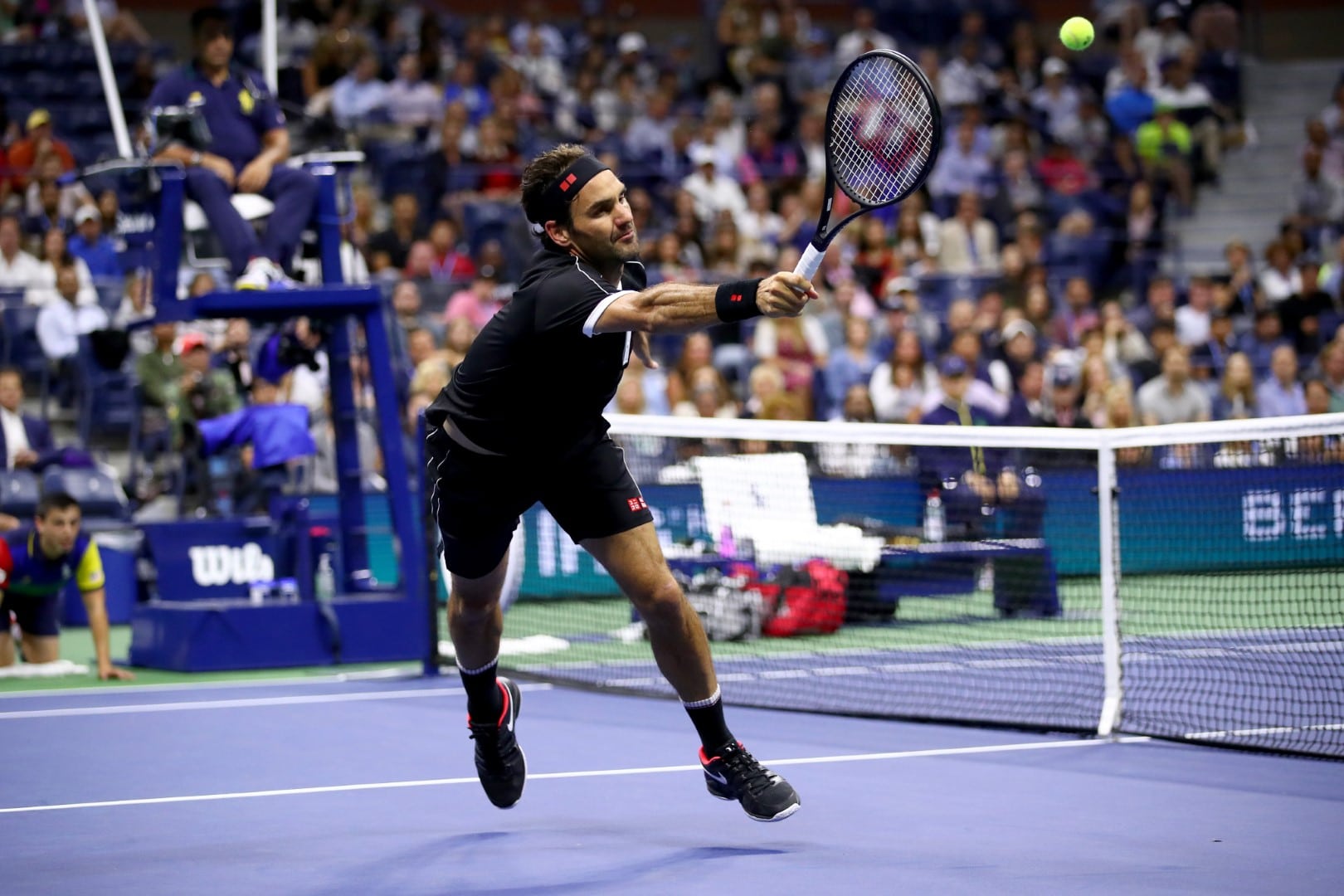 Federer won the toss and elected to serve. The Swiss was forced to deuce, but a couple of moves forward saw him hold for 1-0.

With Nagal not known for his serving prowess, he was quickly down a break as Federer broke to fifteen. However, two double faults from the Fed Express in game three helped Nagal get back on serve.

The Indian qualifier then held for 2-2 before Federer got back in the lead with a hold to thirty for 3-2. An exchange of holds to thirty from both saw the scoreboard tick over to 4-3.

A comfortable hold from Nagal saw him level at 4-4 and then a dreadful service game from Federer meant the Indian moved up 5-4.

Nagal needed no second invitations, serving it out to thirty to take the opener. The first set saw Federer's serve and forehand all over the shop, landing just 48% of first serves, winning 31% behind the second and firing 19 unforced errors.

Into set two and some more sloppy play saw Federer pegged to deuce before holding for 1-0.  The Swiss was then able to fashion multiple breakpoints, seeing three pass him by before Nagal hit back to back double faults to drop serve.

A hold to fifteen consolidated the break for Federer, and he was able to move up a double break for 4-0. A speedy hold put Roger up 5-0 and although Nagal held for 1-5 Roger was able to level at a set all, converting his seventh set point of the game to take it 6-1.

Set three kicked off with Federer ripping some groundstrokes to break for 1-0. A hold to thirty consolidated the break for 2-0 and Roger was able to move through the gears to forge a 4-1 lead, significantly cutting his unforced error count to do so.

With Federer's numbers getting progressively better he was able to take the third set 6-2, winning 9 out of 9 at the net and limiting Nagal to just 33% of points won behind his first serve.

Into the fourth and Federer was able to strike early again, breaking in the opening game for 1-0. The break was then consolidated after a couple of deuces for 2-0 to put Federer well on the way.

Nagal then got himself on the board with a hold for 1-2 before taking advantage of a sloppy Federer service game that featured a double fault at deuce to break back.

Federer was able to break again instantly, then consolidate for 4-2 and after maintaining his advantage, he was soon a game away at 5-4.

With not having served for a match since Wimbledon it was somewhat inevitable the Swiss slipped to 0-40, but he rattled off two aces to make deuce, saved a fourth break point before converting his first match point to move into Round 2. 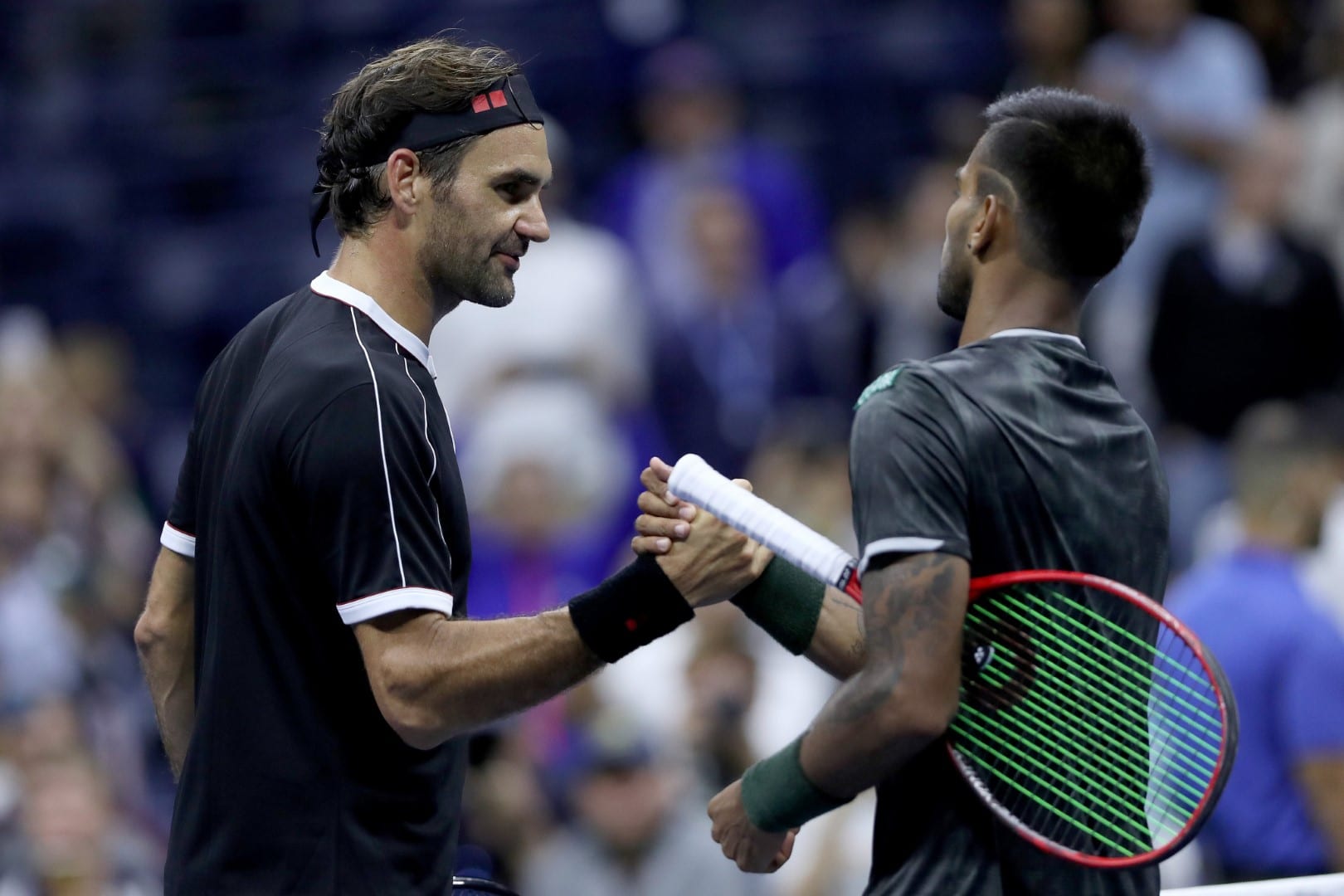 I think trying to forget the first set is never easy I guess in a first-round, under the lights. People expect a different result. I expect something else. I just wanted to pick up my game really, start to play better. I was able to do that. That was a relief, going up 3-Love in the second set, realising that it is on my racquet. I wasn't serving consistently enough. I was hitting double faults that usually I don't do. Also, I was just hitting too many unforced errors. I was in two minds, I guess, I was able to clear that a little bit. Maybe it's not a bad thing to go through a match like this. It was very similar at Wimbledon when I dropped the first set there as well in the first round. At the end, you look at the last three sets, and they were good. That's encouraging. Federer on his win over Nagal at the US Open

A winning start for Roger here but not the most clinical of performances. The first set was one of the worst I've seen him play for a while, making just 48% of first serves, hitting 19 unforced errors and winning just 31% behind his second serve.

Based on that level I assume Nagal was wondering what all the fuss was about as a guy who serves at 100mph and doesn't even like hardcourts had the upper hand from the baseline and deservedly won the first set.

Fortunately, Roger started getting his act together as the match wore on and once he'd become more familiar with conditions, the Wilson balls and cut down his errors he was able to power through the next three sets without too many problems. The third set being the pick of the bunch in terms of stats and he'll be happy to get through in four.

As for Nagal, he gave a good account of himself. He's got an average serve for the top level, but he got around the court well, and his inside out forehand was able to get him on top in a few of the rallies.

Most of his best plays were reactive though and over five sets that is going to be difficult to win matches against the best. Once Federer started keeping the ball in the court, the number of points he was able to win dried up and the rest is history.

Next up is Damir Dzhumur who like Federer beat his qualifier opponent in four sets. Dzhumur has had a reasonably poor year with a couple of injuries thrown in which saw him briefly slide out of the top 100.

The Bosnian has even dropped down to the Challenger level in recent weeks in a bid to get some matches, and his win here at the US Open is his first Grand Slam victory of the season.

Federer has played Dzhumur twice before, winning both matches comfortably and he's practised with him a ton, so he has plenty of information on his game.

In a lot of ways, he plays like Nagal; not the tallest guy and no real weapons but has excellent court coverage so will make a lot of balls. Nagal favoured his forehand, running around the backhand with a lot of success whereas Dzhumur is stronger on that side.

The main thing for Federer is to avoid a disaster start like he did today, Dzhumur has four top ten wins on his resume so has far more experience than Nagal. On form, Federer in straight sets.

What did you guys think of the win over Nagal? Predictions against Dzhumur? Let me know in the comments.