One of the toughest first round matches Federer had ever faced in his career supposedly but this one was over in a mere 1 hour and 17 minutes as the Swiss dispatched Leonardo Mayer 6-1 6-2 6-2 to make serene progress into Round 2.

Based on their Shanghai meeting last year, where Roger saved 5 match points, this looked like it could be a close encounter but Federer played at such a fast tempo that Mayer had no answers. Combine that with the high humidity and the Argentine had no breathing room, sending down 7 double faults which helped Federer break twice in each set to get the job done with zero fuss. 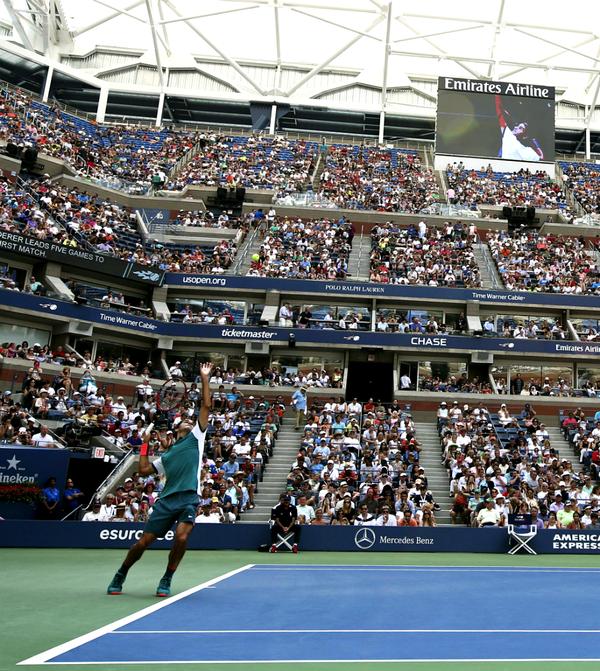 Federer opened things up with a hold from 0-30 to lead 1-0. Mayer then slipped from 30-0 and 40-30 up to drop serve, hitting 3 double faults in the game including one on break point.

Momentum was instantly on Federer's side with the early break and he consolidated it to 15 to lead 3-0. In game 4 we got the first sabr return of the US Open which forced Mayer into a double fault, the Argentine went onto drop serve for a second time.

Roger looked set to move up 5-0 at 40-15 but Mayer reeled off 3 points in a row to fashion his first break point. Fed saved it with an ace, hitting a another at deuce then holding for 5-0. The set played out with zero drama as Fed took it 6-1.

Into set 2 and Mayer, still delivering double faults at key moments, got a much needed service game on the board for 1-0. Federer quickly levelled and in game 5 broke to lead 3-2, again courtesy of a Mayer double fault. A hold to love followed and at 4-2 we got 2 sabr returns in one game as Fed broke again to lead 5-2. He served out the set 6-2 easily to take a two set to love lead hitting a slamdunk smash on set point.

Set 3 was more of the same as Fed broke early to take a 2-1 lead. A weird serve volley play from Mayer on break point who looked bereft of ideas. 3-1 soon became 4-1, again with another service line return and although Mayer held for 2-5 he couldn't stop the Fed express as the Swiss served it out 6-2 to book his spot in the 2nd round. 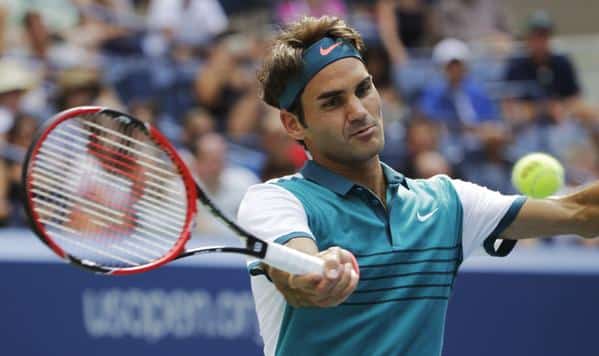 All very routine here for the GOAT as he made light work of a player unlucky not to be seeded at this years Open. I wasn't sure what to expect prior to the match (I predicted straights but with close set scores), but as soon as Fed held from 0-30 and broke early you just knew it was going to be a good day at the office.

We've seen many times when Fed has a tough match against a non Top 5-10 opponent he usually handles them easily the next time they meet and this one went the exact same way. Mayer was instantly under the cosh and Fed just kept his foot on the gas; playing at a lightning quick pace both during and between points to completely take Mayer out of it. The Argentine looked rushed, couldn't seem to slow down the tempo of the match (a la the master Nadal) and as a result he made 31 unforced errors, hit 7 double faults and won just 51 points compared to the 85 points of the Swiss. The mental implications of the Shanghai loss can't be overlooked here either, it might be 12 months ago but it looked like they all came flooding back when Mayer stepped on court today hitting 3 doubles faults in his first service game.

As for Federer he was just solid in everything, served well when he needed to, mixed it up nicely throwing in 5 service line return plays and taking the ball really early to keep the initiative. Only 1 break point faced, saved in style and the numbers are all pretty clean.

Matchup aside – the court looks to be playing pretty quickly. Federer said pre tournament the ball flies more in NY than in Cincy, and on court today he said that it played faster than Shanghai (talking about last years close match against Mayer). The wind has also been eradicated due to the roof structure so it looks like Ashe is playing almost like a quick indoor court which should aid Fed. Early days of course but here's hoping 🙂

We've also seen in these opening rounds that the heat looks to be a factor with numerous players cramping and retiring due to fatigue. Nadal said he was dehydrated after his 4 set win, Kokkinakis, Gulbis etc. have all retired mid match and a lot of the guys appear to be struggling. So it's going to be important here to conserve energy in the early rounds and recover quickly; time for Daniel Troxler to earn his money 😉

Next up is Steve Darcis who beat Marcos Baghdatis who retired at 3-1 down in the fourth set. I had a feeling Baghdatis would struggle here after all the retirements so far coupled with the fact he has a track record of being injury prone and has pulled out of five matches over the last 18 months.

Darcis doesn't exactly have an injury free record either so I think he's easy pickings for Federer. They've never played before but aside from Darcis' big win against Nadal at Wimbledon he's not really done much on the Tour, playing a mixture of ATP events and challengers. His best results have been on hard court this year though at Montpellier and Indian Wells so he might offer some resistance early on but I'll pick Fed in 3. 6-4 6-2 6-1.

Let me know what you thought of the match, and also let me know how many service line return / SABR (Sneaky attack by Roger) we will see in Round 2. I predicted 5 in Round 1 which was right on the money!