The win sees the Swiss move into his 12th straight Basel Semi-Final and having only lost in one of his fifteen Basel quarter-finals to Tim Henman way back in 1999 many expected an easy nights work but he was troubled throughout.

The wily Simon who has 2 titles to his name this season served for the first set, broke Roger's serve 5 times and drew  60 unforced errors before Roger finally progressed in 2 hours and 34 minutes. 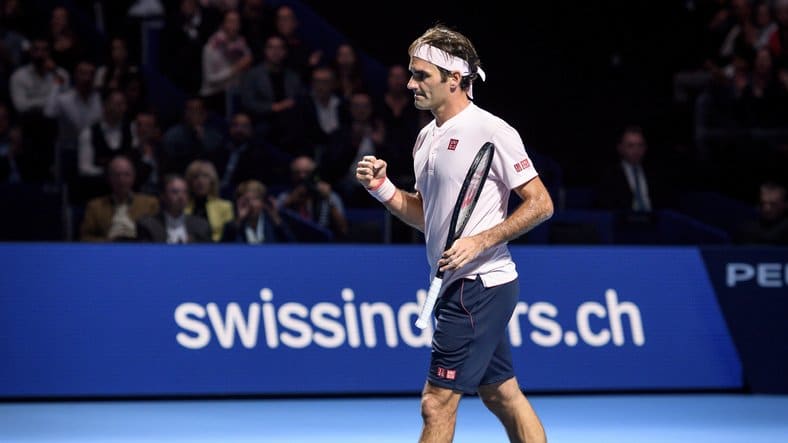 Federer won the toss and elected to receive. Simon kicked off with a hold after some nice opening points from the Swiss pegged him to deuce. Roger then moved up 30-0 and it looked like he was quickly into a nice rhythm but he then lost four points in a row to drop serve.

Simon then held to fifteen for a 3-0 lead and there was a collective ‘here we go again' :D.

In game five Roger fashioned his first break back points but failed to convert. Three more came his way in game seven, but he couldn't take them as Simon held for 5-2.

A hold to 15 kept Roger in the set and he was then finally able to break when Simon served for the set. A quick hold saw him level at 5-5 but the Swiss then had to save a set point in order to force a tie-break.

Into the breaker and Fed got off to a fast start, moving into a 3-1 lead and winning four points in a row to take it 7-1.

Set two also started nicely for Fed who moved up an early break for 2-1, however, he tamely handed it back, only to break Simon in the next game and the exact same thing to happen. The Frenchman then broke for the third time in the set at 4-4 before serving it out to take it 6-4 despite only serving at 32% for the entire set.

The third was anyone's best guess and again it was Fed who struck first, breaking in game two and this time he managed to consolidate for 3-0. At 4-1 it looked like he had one foot in the semi-finals but Simon won the next three games to level at 4-4. A hold to fifteen put Roger up 5-4 and Simon then faltered, losing serve from 40-15 to drop the decider to 6-4. 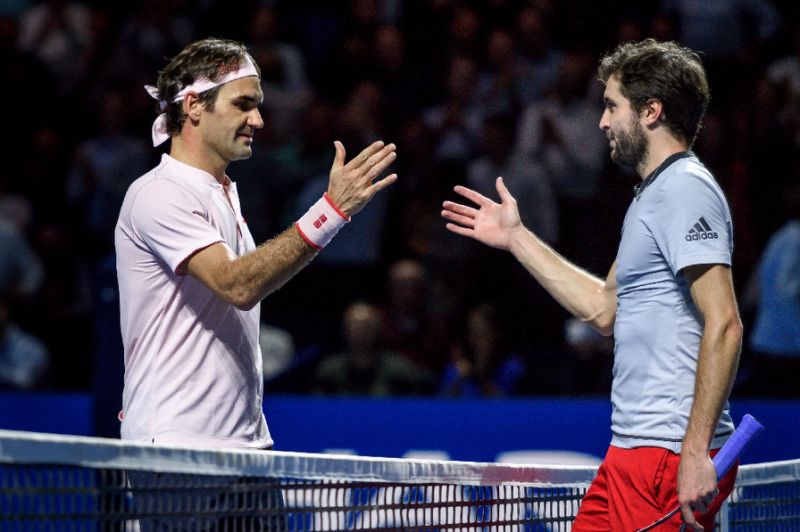 Sure, Gilles came back. But I found a way, which was most important, so I'm really happy now. It was always going to be at times a frustrating match, because you're always going to hit winners and errors against Gilles because he puts so many balls in play.

A tough match to watch this one as Simon caused Roger a lot of problems out there. In the opening game Roger started nicely mixing up topspin and slice to make deuce and I thought to myself he'll win easily if he keeps this up. He then played a crap service game and was behind for most of the first set 😆

Fortunately, he found a way to sneak back into the opening set and played a very solid tiebreak to get in front which was crucial in the end. From there it was the ultimate Basel merry-go-round, Roger made a slew of unforced errors throughout the next two sets, dropped serve three times in set two and then let the lead slip in set three which could have cost him.

The numbers are all fairly average, obviously, 60 unforced errors stick out like a sore thumb but his return game wasn't great either. Kinda worrying that Simon served at just 32% in set two which he won 6-4.

Anyway,  the positives are he won the match and now has a chance to make the final. Other than that I don't think he's playing great, I know Simon is a rope a dope opponent that makes you miss, even making Djokovic hit 100 unforced errors in a match in 2016  but I don't think Fed has looked too convincing this week, he looks short on practice and low on confidence. Winning obviously helps so hopefully he can keep going 🙂

Next up is Daniil Medevev who set up a Shanghai rematch by defeating Stefanos Tsitsipas in three sets. I watched the opening few games and Medvedev looked to be moving nicely, coming out on top in a 37 shot rally early on.

The Russian gave Fed a real scare in Shanghai and he's been in a purple patch of form lately, winning the Japan Open, making the semifinals at the Kremlin Cup and now doing the same here.

It's probably a good thing for Fed they played just 2 weeks ago so he knows a little bit more on what to expect but it also helps Medvedev who will surely fancy his chances based on Shanghai and seeing how Roger has played this week.

Predictions wise I have no clue other than like most matches of late, it will be tough. There aren't many players you can lose serve to 5 times in a match and still win and I don't think Medvedev is one of them so Roger will really need to tighten up.

What did you guys think of the Simon match? Predictions vs. Medvedev? Let me know in the comments.