Roger Federer is into the quarter-finals at Flushing Meadows thanks to a comprehensive 6-2, 6-2, 6-0 victory over fifteenth seed David Goffin after one hour and nineteen minutes.

The win sees Federer deliver his ninety-fourth bagel at tour level and move into his thirteenth US Open Quarter-Final which ties him with Andre Agassi at Number two on the list behind Jimmy Connors. 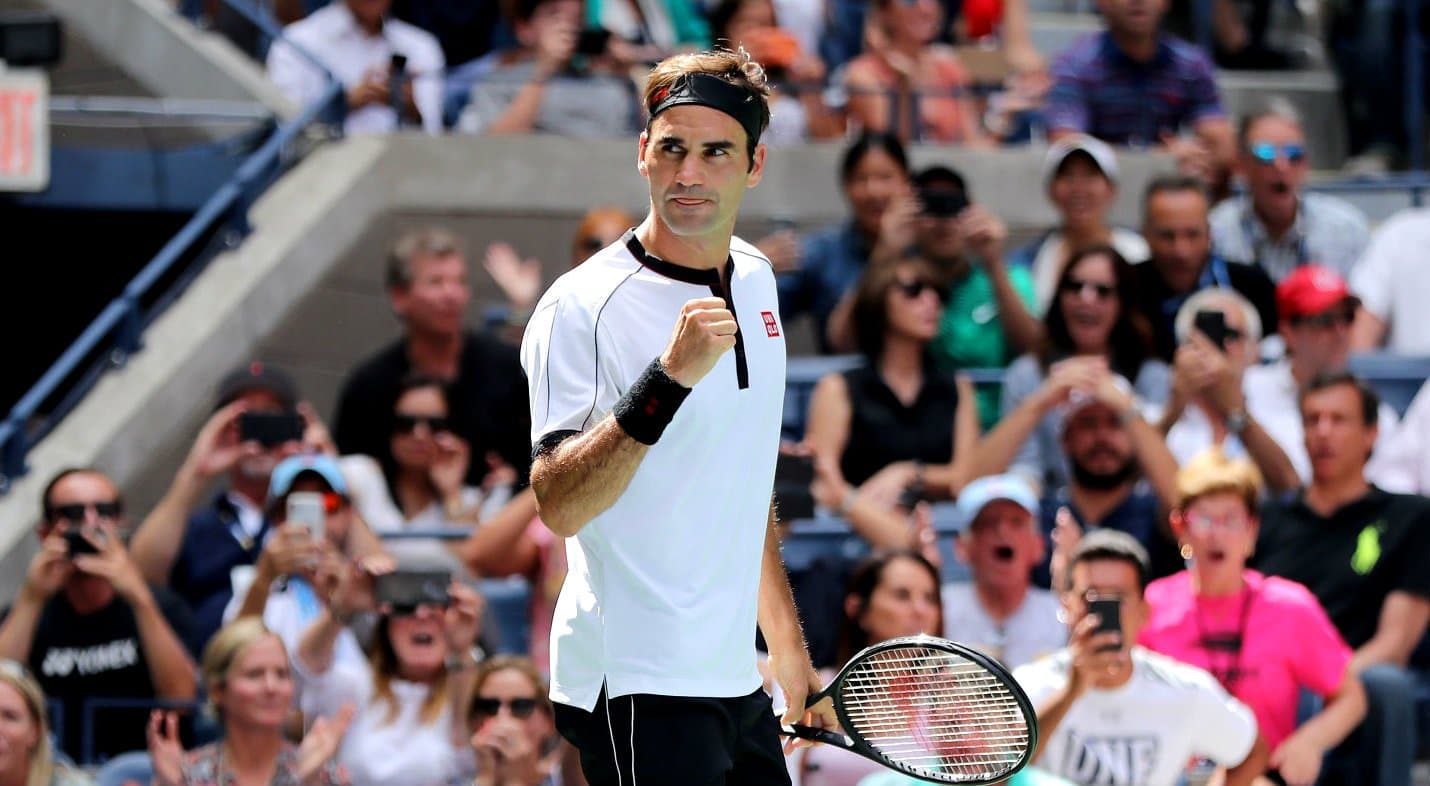 Federer won the toss and elected to serve.  The Swiss kicked off with a love hold for 1-0.

Goffin has been working with Tomas Johanssen to improve his serve in recent weeks and the Belgian was soon level at 1-1, firing down a 122mph serve on game point.

Goffin then fashioned two breakpoints. Federer saved them both to make deuce. However, after saving a third and holding a game point, he slipped up as Goffin was able to convert his fourth chance to lead 2-1.

However the fifteenth seed quickly slipped to 0-30 and despite making thirty all, Federer was able to break back instantly, converting his first break point chance for 2-2.

A love hold put then but the Swiss back in front at 3-2 and a speedy break to love after rushing Goffin put Roger up 4-2.

Another love hold then saw Federer move up 5-2 and he'd won 14 points in a row. Goffin finally stopped the streak at sixteen straight points lost but he couldn't prevent the Swiss winning his fifth straight game to take the set 6-2. Federer had landed 75% of first serves, hit 12 winners and won 3 of 3 breakpoints to instantly turn the set around.

Another speedy hold put Roger up 2-1 and Goffin was unable to make many inroads on the return. That wasn't a problem for Federer though as he broke in the next game to lead 3-1, mixing up big forehands with the slice and drop shot to cause Goffin all manner of problems.

With Fed on cruise control consolidating seemed inevitable but he slipped to 0-40 after a couple of forehand errors. An inside in forehand winner and big serve saved the first two but a double fault relinquished the break.

With Jim Courier revealing on Amazon prime Federer breaks back around 25% of the time the game after dropping serve, he was quickly on the way to bumping up that statistic creating 15-30. A slick get from Goffin got him to thirty all, but he double-faulted on game point and Federer won the next two points to lead 4-2.

A ridiculous forehand at thirty all then gave Federer game point to consolidate and he did so to lead 5-2. Goffin then wilted, dropping serve to love as Federer moved into a two-set lead after 58 minutes.

Into set three and Federer's serve hit the spots to hold to thirty for 1-0.  Federer's variety was now on full show, exposing Goffin from the baseline to break to love for 2-0.

A love hold with some sweet forehands consolidated the break for 3-0 and Federer was well on the way.  Goffin, now looking deflated, dropped serve again to fifteen and Federer reeled off another hold for 5-0 before breaking for the third time in the set, sealing it by ripping a backhand up the line after a lengthy rally. 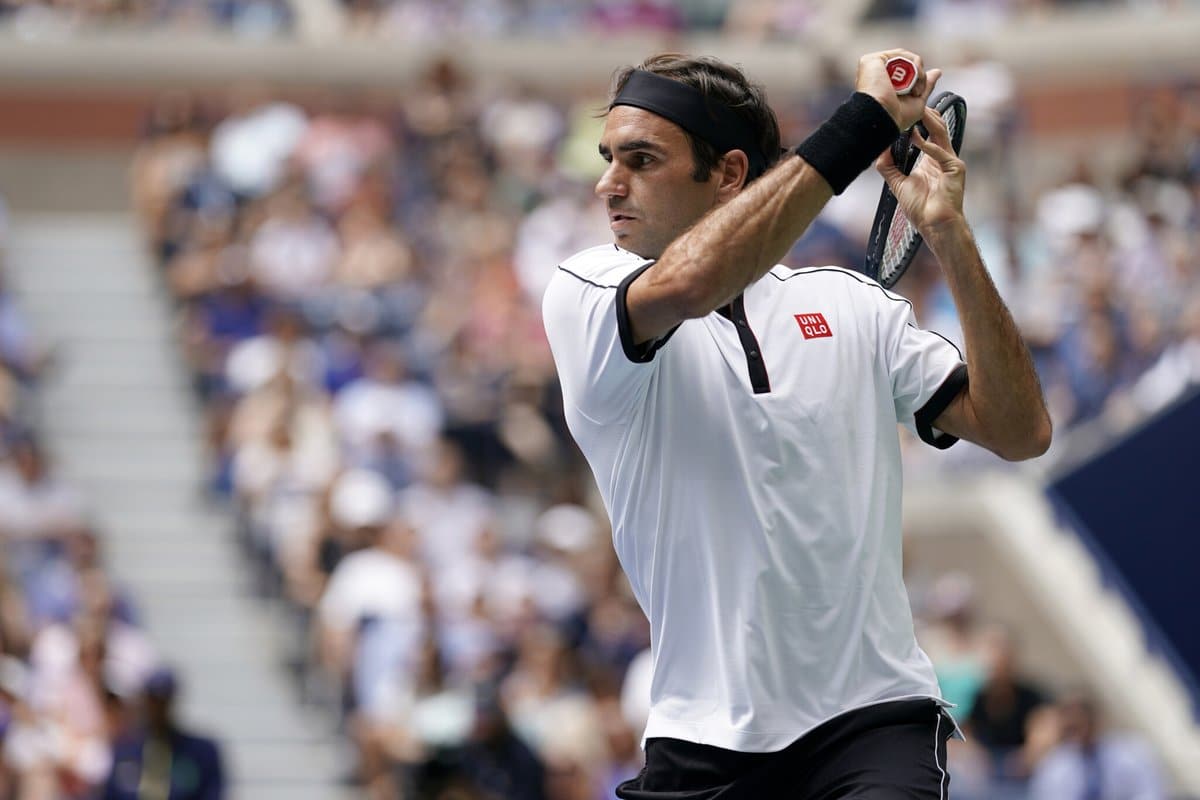 It was great. David didn't have his best day either, he was struggling. I was down on the score early so had to come back mentally. But then when I was up a break I started to feel like he wasn't playing the same way and I was very happy with my level of play. Federer on his win over Goffin

A super slick performance from the Fedmeister here and in some ways it reminded me of the win against Juan Monaco at the US Open in 2011.  A similar scoreline and he took apart Goffin with free-flowing tennis that he had no answers for.

The Belgian actually started quite well, making some nice returns to break but as soon as Federer broke back and got up a break himself, the match turned on its head and Federer dominated in all areas.

Stats wise it is as one-sided as you'd expect with Federer winning in every single area. Perhaps the only low-ish number is 40% won behind his second serve but everything else is complete domination with a whopping 82 to 39 to total points won.

Interestingly he won 66% of return points too, and I was 100% certain we wouldn't see that above the 60% he recorded against Evans in this tournament but here we are!

The key to the match for me was how easy Federer broke Goffin's preferred patterns of play. He was having a confident ball-striking day and used the backhand down the line to stop Goffin getting into any comfortable rallies where he could do some damage with his own backhand.

Having to cover that shot seemed to rattle the Belgian and he got flustered, deflated and one paced which allowed Federer to play as though he was 20 moves ahead of him and smother him from the baseline. Aided by groundstrokes that, as per Mark Petchey on Amazon Prime, were up at an average of 82mph on the forehand and 78mph on the backhand which is heavy-hitting by anyone standards.

As for Goffin, he'll be disappointed with his level. I'm not sure why he looked so out of it as the match wore on, a low energy day perhaps but every Federer winner seemed to knock the stuffing out of him and that's all she wrote 🙂

Next up is Grigor Dimitrov who defeated Alex De Minaur in straight sets over on Grandstand. This is the furthest Dimitrov has been in a Grand Slam since the 2018 Australian Open and since winning the World Tour Finals in 2017 he's had a string of poor results.

This US Open has seen the Bulgarian have a fairly light draw to the make the quarters, beating Seppi, receiving a walkover, defeating Majchrzak and now De Minaur.

I haven't seen him play this tournament other than some highlights so I'm not sure on his level, he's not had any big wins in a while so difficult to see him troubling Roger. If his game clicks he can certainly beat the top guys but he isn't the smartest player out there, so you'd think Federer will be too solid assuming he serves well.

What did you guys think of the win against Goffin? Predictions against Dimitrov? Let me know in the comments.