Fedal XXXIX has been put on ice after Rafael Nadal withdrew before his scheduled Indian Wells semi-final due to a right knee injury.

There was huge speculation around his participation today after commentator Rob Koenig revealed that he had only practised for 15 minutes earlier this morning without hitting a single serve.

Not a total surprise here as he'd looked in discomfort for most of the second set against Kachanov and at 32 he's got to look at the bigger picture to prolong his career.

The withdrawal means Roger is through to his third BNP Paribas Open final in a row and will face Dominic Thiem in the final. 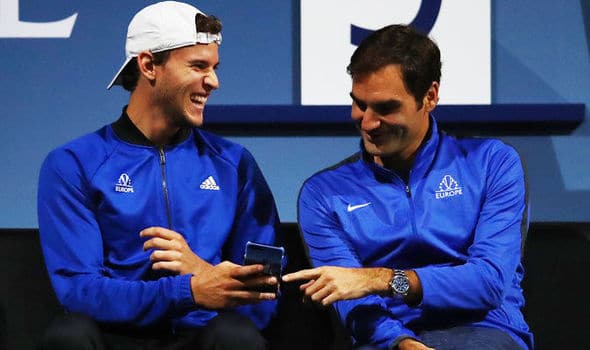 Next up is Dominic Thiem who defeated Milos Raonic in three sets. I watched parts of it and it was a fairly close match but Thiem deserved the win as Raonic's forehand let him down firing 23 unforced errors.

The Canadian should have broken back at 4-5 in the third after Thiem played a horrific drop shot but he somehow floated his slice approach long despite getting to the ball with loads of time to spare. It was a comical last game really as you have  a nervy Thiem whose arms and legs fly all over the place on his groundstrokes and then Raonic looking cumbersome bumbling around at the back of court about to explode after missing some routine shots. But anyway Thiem finally closed it out and that's that.

Tomorrow is the Austrian's first Masters 1000 final on hard courts and he seems to be enjoying the conditions in Indian Wells so he's going to be Roger's toughest test of the week so far.

I’ve felt good from the first moment here. To me, it’s like almost like a clay court, just where you cannot slide, because the bounce is pretty high, especially when it’s sunny, when it’s warmer during the day. Somehow it’s strange because it’s a slow court, but the ball is going fast through the air. It’s very good conditions for me.

In terms of gameplan, I liked Raonic's approach of coming forward which he did with some success and I figure if a guy like Milos who is static and quite heavy handed in the forecourt can win a lot of free points Roger will look to replicate that.

Thiem returns fairly deep so there's a lot of opportunities to come in behind well-placed serves to win cheap points and I like Federer's chances tomorrow if he sticks to his guns of taking it early and taking Thiem's time away.

The Austrian gets dangerous when he has time to wind up his powerful groundstrokes so hopefully Fed can neutralise him with some trademark Swiss timing. I make Federer favourite but it's by no means a given. Hopp Suisse! 💪

What are your predictions for the final? Let me know in the comments.