Hey all! Had a couple of people asking me to do a guest post about the Davis Cup in Geneva, so here it is, admittedly a little late!

First of all, the stadium was REALLY impressive. You don't usually see 18 500 people in one place, let alone everyone sporting the same red and white colors. I've been once to the O2 in London (first time seeing Fed live) and although the stadium seemed a lot bigger in London, having everyone (close enough anyways) encouraging the same guys is really special. When we sang the national anthems, Roger seemed close to crying already then, so for those haters who say he doesn't like playing for his country, suck it up! 😛 *rant done*

The maestro kicked the tie off against Simone Bolelli, and to be honest, it wasn't Fed's best performance ever. Credit to Bolelli, he played a solid match, but Fed could/ should have done a lot better. The one point I remember is that lob volley he hit at some point (cannot remember when it was exactly, I think end of first set). 18 500 people were standing on their feet applauding, even the Italian fans around. It is always special to see those kinds of shots live.

Another thing that struck me was the court speed/ surface: I cannot say if it was slow for I cannot compare to what is a known fast court, but it seemed EXTREMELY gritty. Roger was spinning that forehand furiously, and the ball seemed to jump up from the court a huge amount. His slice was pretty impressive to watch though; it's impressive to see how it floats in the air and barely bounces. I'd like to see him use it more as a tactic, instead of just slicing when he's on the defensive.

After the three set victory, we were all happy at having the first point, contrary to what happened in April, thanks to Stan's seemingly infinite unforced errors 😛 So we were all on edge when Stan and Fognini were warming up. Stan is known to blow away matches he shouldn't, and, well, Fognini is kind of a mystery… Never know how he's going to play.

Then Stan started bombing aces and first serves everywhere and not missing half as much as he usually does. I realize it may have looked different on TV, but to us spectators, live, it looked like he couldn't play any better. With a little help of Fognini of course 😉

What is really striking is how hard Wawrinka hits that ball… Federer is all in finesse, Stan is all brute power, though that backhand is a joy to watch!
So here comes Friday evening and we are leading 2-0, all is good. Wilson had a stand there and a “court” (basically lines on concrete) where we could hit a bit (~2mins per person) with Roger's new racket. Was strung with some Luxilon, BB Alu I believe, but not sure. Very pro staff like, but with more power. Still is bloody heavy though….

So Saturday we go to the stadium having no clue who would play dubs. Apparently Fed got lazy/ confident, so he decided not to play, leaving Marco Chiudinelli and Stan fight it out. So the same team that lost the longest Davis cup match ever lost another 5 setter… Most of us were almost happy – yes we are terrible fans 😛 – hoping to see one interesting match on the Sunday. The dubs in itself was pretty good, tough Marco didn't quite hold out at the end (was broken twice in the 5th), and Stan missed a few key returns, like he has a tendency of doing… Bolelli looked pretty sharp, once more.

So here we are back on Sunday waiting for Roger to play Fognini. The first set and a half was pretty lackluster from both guys, but they started picking up the rhythm and by the end of the 3rd set, it was a pretty decent contest. They both had a couple of very nice points, and it was impressive watching Fed dictate the rallies like that, something he failed to do in his first rubber.

The crowd was completely galore in the tie break, and that celebration at the end was priceless! Never seen fed react that way live, always cool to see.
Enter the journalist –who basically killed the entire atmosphere with her ridiculously stupid questions… Seve and Stan picked up Roger out of nowhere and carried him around the court, was very fun to watch, and saved us from the interview… The rest of the team tried to catch Stan to do the same, but he didn't want to (party pooper) so they chased him around the court before leaving him be 

Then was the dead rubber, with Seppi playing Lammer. Lammer is ranked beyond 450th in the world, but he plays wayyy better than that. He played a very decent game against Seppi, and boy does his backhand look nice –what's with the Swiss and their one handed backhands anyways?! So anyways, since everyone left after Feds match, me and my friend managed to sneak in to the VIP lodges, and watched the match from there, was very nice 😛

On the way out, we stopped by the players' passage to try and get some autographs, which was a zoo… Unfortunately I didn't have enough time to get everyone's, but I got both Stan's and Seve's (I already have so many from Roger that I'll survive not getting his this time 😛 ).

That concluded a very nice Davis cup weekend, and since I don't have the money to go to France + hotels etc etc I'll be watching the final with most of you guys on TV 😛

PS: For those who haven't seen Fed live yet, you seriously do not want to miss it. It's out of this world how differently he plays compared to the other big guys. If you can arrange, go see him play before it's too late! 😉 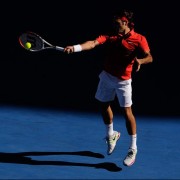 I'm a huge fan of Roger and one handed backhands in general, but Roger first! The only reason I would skip a Fed match is if I'm playing myself - no player is bigger than the sport!