In what was a one-sided contest the Swiss was out of the blocks quickly against a sluggish looking Evans who had been forced to play his second-round match yesterday due to the inclement weather on Wednesday.

After testing Federer in Australia earlier this year with two of the three sets going to tie breaks, there was no repeat here in New York, as Roger dominated from start to finish with the Brit winning just fourteen return points in the match.

Next up for the five-time champion is either Pablo Carreno Busta or David Goffin who face off later today. 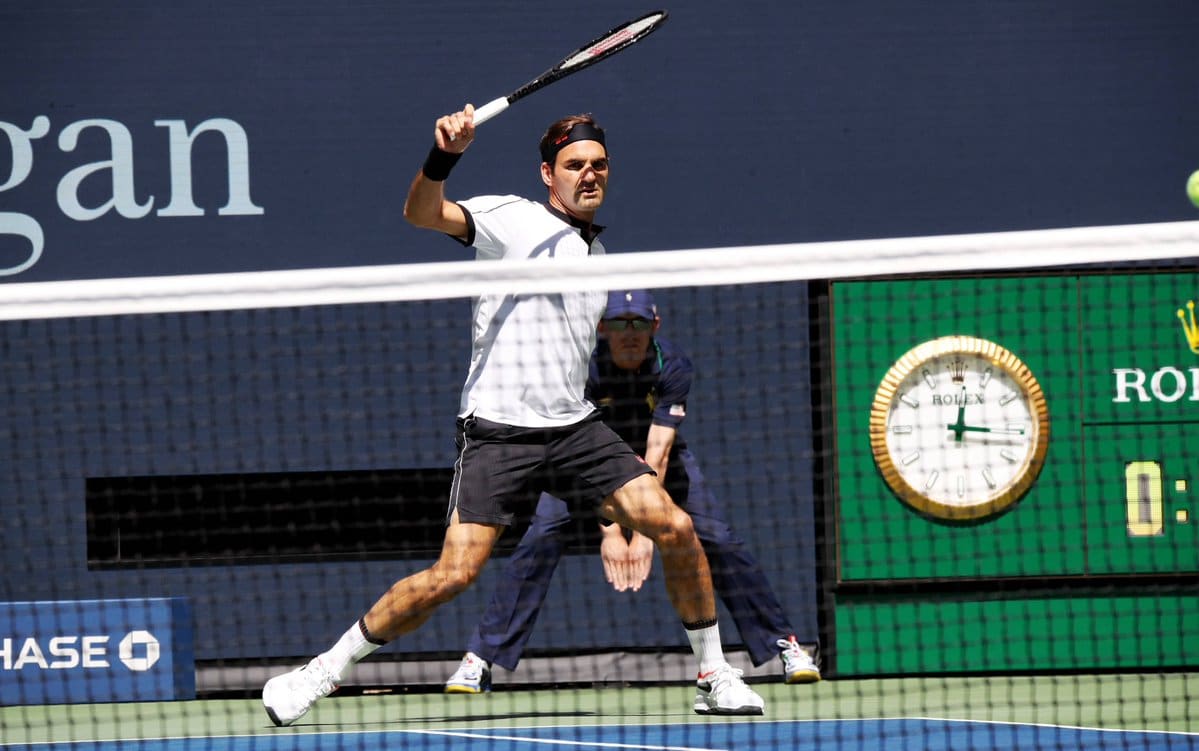 Evans won the toss and elected to receive. An ace kicked off Federer's first service game and he held to fifteen for 1-0.

The Brit was quickly level with a love hold before Federer held to thirty for 2-1. Into game three and a slick combination of forehands gave Federer 0-15, a slice lob then deep volley set up 0-30 and he soon had three breakpoints.

However, Evans has plenty of hustle to his game and two impressive volleys helped him make deuce before levelling for 2-2.

A speedy hold to fifteen from Roger put the pressure straight back on the Solihull man and this time he couldn't escape the game. Federer was able to set up two break points with a silky stop volley and he converted for 4-2.

Roger again held to fifteen to consolidate and he soon had the first set in the bag with a second break of serve to take it 6-2. The Swiss made just 9 errors and despite only serving at 50% was ahead in all areas as Evan's struggled behind his own delivery,

Into set two and Roger kicked off with a love hold and quickly had 15-40 but Evo recovered to hold for 1-1.

Another love hold put Fed up 2-1 and in game four he reeled off three sweet returns to leave the serving and volleying Evans stranded in no man's land. Federer then picked Evans off with his inside out forehand to break to love and lead 3-1.

A third straight love hold put the Swiss up 4-1. Evans then held to thirty for 2-4 but having only won six points on Federer's serve in the match he needed to quickly find some answers. However, a ridiculous point from Federer for 15-0 helped him cruise to his fourth straight love hold for 5-2.

The Swiss then reeled off some slicker returning to break to love to win the second set 6-2. That prompted Evans to smash a racquet, no doubt furious he'd only won 10 points in the set and wasn't able to win a single return point.

The third set started with another Federer love hold and after a lengthy service game, Evans dropped serve from 40-15 to fall behind 0-2.

With Evans looking dejected and sarcastically telling his box he was playing great it looked as though the match would soon be over, but a sloppy service game from Federer allowed Evans to recover the break.

That success was shortlived as Federer broke to love, aided by two double faults to lead 3-1. A hold to thirty consolidated for 4-1 and Evans was quickly down a double break, hitting a double fault on break point to give Roger a 5-1 lead. The Swiss then served it out to fifteen to move into round 4. 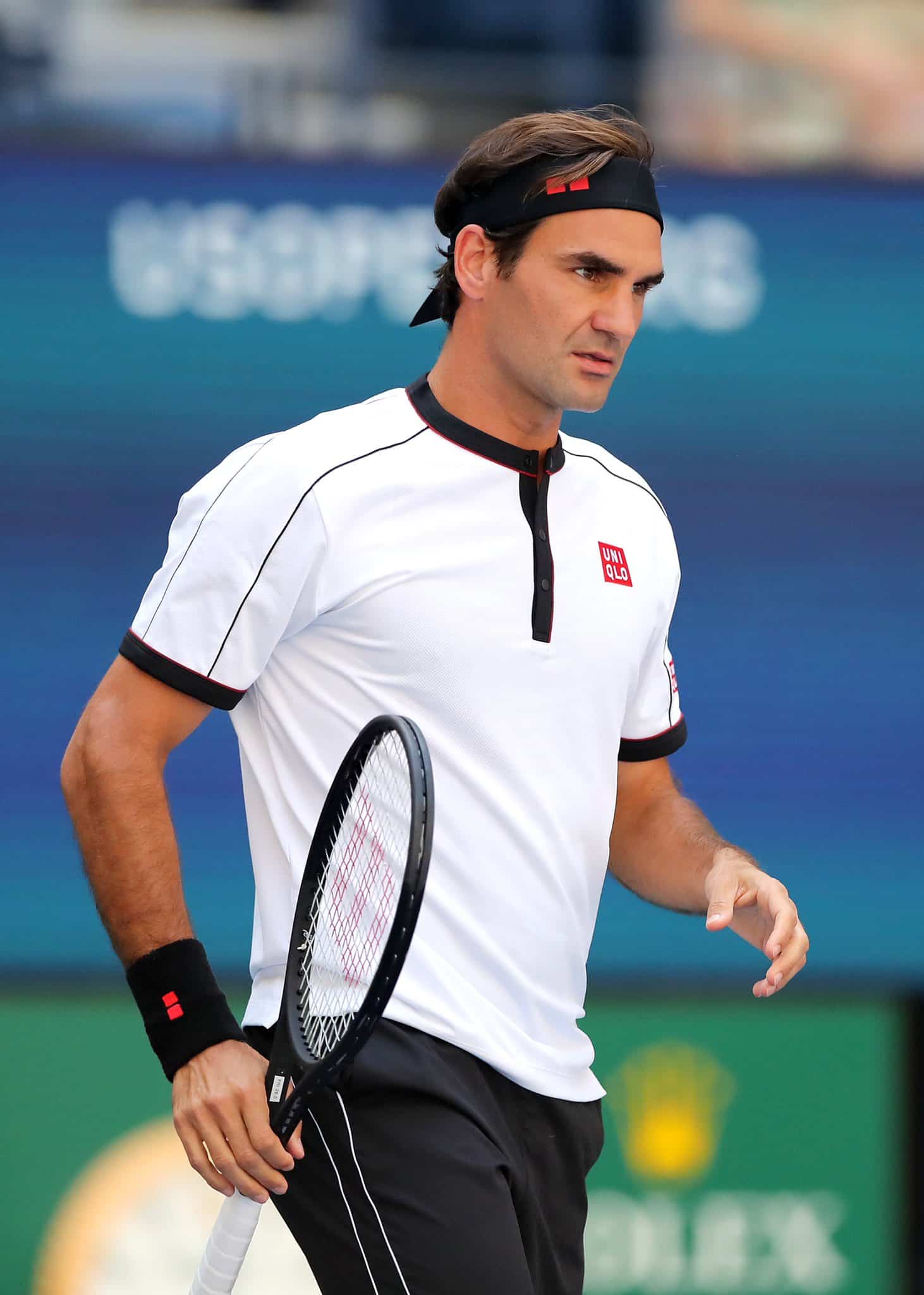 Maybe Danny wasn't feeling it quite today. He played yesterday so maybe that was a competitive advantage for me. I really enjoyed it out there today. I definitely think this is playing much faster than at night and even indoors. That's the key to winning here and staying around, to adjust to wind, heat and humidity. It makes the ball travel differently and I was able to manage it well.Federer on his win over Evans

A solid and routine win here for Federer which was pleasing to see. After starting slowly in his opening two matches against Sumit Nagal and Damir Dzumhur he was into the groove against Evans in no time, winning the first set in just 27 minutes.

From there on it was a total carve-up and Evans had no real answers, Roger held to love for five games on the spin from the first game of set two to the first of set three so he was never in any sort of trouble. Stats wise it's all pretty good with 48 winners and 80 per cent of first-serve points won along with 70 per cent won behind his second delivery.

However, as comfortable as it was, there is no point getting carried away with the win just yet. It was good but a lot of Evan's shots didn't have much pop on them. That lack of weight on the ball meant Federer could play on autopilot without ever being out of his comfort zone. Evan's serve was rudimentary to return as well, he didn't have that leg drive and seeing Federer win 60% of return points is unlikely to happen again in the tournament.

But you can't knock Fed's level. He took full advantage of the faster day time conditions, figured out early Evans had nothing to hurt him with and gave him a true working over. The highlight for me was the stop volley in game six to set up 15-40 and the first point of game seven in set two which was top class. That backhand smash wasn't half bad either 🙂

As for Evans, after getting over being comprehensively outplayed on Arthur Ashe he can reflect on another decent tournament which sees him return to the Top 50 and close the prize money gap with Jamie Murray. The Brit has a ton of upside to his game and you feel like if he can improve in a couple of areas he can take things a step further on the tour. He'll no doubt feel a bit unlucky having to play two days in a row as to stand any chance he needed to come out explosive and really take it to Federer but it just wasn't there for him.

Next up is David Goffin after he defeated Pablo Carreno Busta in three tight sets. Federer said in his intereview he'd prefer to play Goffin overall as he knows his game better compared to Busta whom he has only played once way back in 2013 at Roland Garros.

Goffin, on the other hand, has been Roger's opponent nine times with eight victories for the Swiss. That tells you a lot about the matchup and it's firmly on Federer's racquet. The Swiss has a better serve, more versatile groundstrokes and is usually the more aggressive player which is why it's been a one-sided rivalry.

However hard courts are arguably Goffin's best surface and I'm guessing he will like the conditions in New York if the ball isn't lively as he has a fairly conservative grip. Federer said the court reminds him of the Tour Finals, which is where Goffin's sole win came from so I'm expecting David to make it competitive if he can serve well.

What did you guys think of the win against Evans? Predictions against Goffin? Let me know in the comments.