Doesn't get any easier than this folks as Roger completely demolished James Duckworth 6-0 6-1 in just 40 minutes and 34 seconds to move into the Semi Finals in Brisbane. It was a completely one sided affair and by my reckoning is the third fastest match of Roger's career. Only matches against Denis Golovanov at the Kremlin Cup in 2002 (37 minutes) and Mischa Zverev at Halle in 2013 (39:26) were faster.

The victory saw Roger record his 998th career win and inflict a bagel on an opponent for the 95th time. It was probably one of the most one sided matches I've seen in the last few years really as Duckworth made a terrible start and never recovered. Looked like he thought any chance he had hinged on the very first game and when he was broken it was all but over in his own mind. Millman showed the way you have to play to even stand a chance against Roger but Duckworth wasn't able to replicate any of the success his compatriot enjoyed 24 hours earlier. 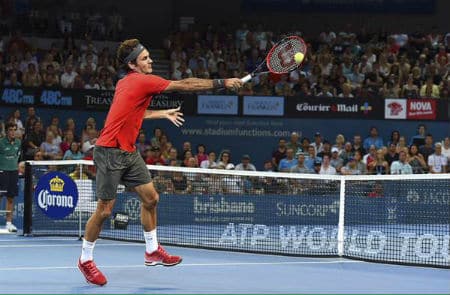 Duckworth kicked things off and although he recovered from 0-30 to hold game point he was broken when Roger reeled off a sweet backhand pass at deuce then drilled a forehand winner to convert his first break point opportunity.

The loss of the first game already put a look of frustration on Duckworth's face and after winning 3 points in his opening game, he only managed 3 more in the entire set as Roger swept him aside 6-0, only dropping 2 points behind his own serve.

The second was surely going to see an improvement from Duckworth but he again got off to the worst possible start, dropping serving immediately with some sloppy play. He did manage to make deuce in Roger's service game but two big serves saw Roger consolidate.

6-0, 2-0 down meant the best Duckworth could hope for was to make the second set scoreline respectable, he set the ball rolling with a hold for 1-2 but was broken in his next service game as Roger then reeled off 7 aces in a row to take a 5-1 lead. Serving it out wasn't necessary for the GOAT either as Duckworth was again broken to 15 to drop the set 6-1. Routine. 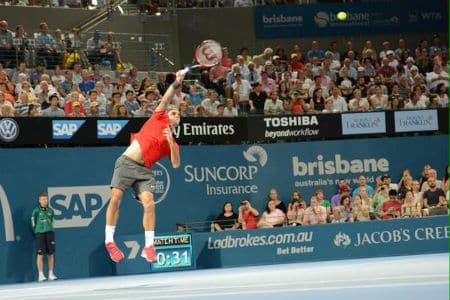 A flawless performance here from Roger and I don't think he will play an easier match this year. Duckworth never got any sort of play on Roger's groundstrokes and he was completely outclassed from start to finish.

Duckworth can clearly play better but he doesn't move anywhere near as well as Millman or have the consistency so wasn't able to get on top in the rallies. Fed just took charge, stepped in and hit his forehand with a lot of conviction. Duckworth had no chance, no real plan B when things were looking grim and Roger just took full advantage.

When you're playing the type of tournaments Duckworth is week in week out then it's very rare you play someone with the quality Federer possesses. I'm guessing the level that Fed produced today completely surprised him and he ended up being blown off court in just 40 minutes. He had a face like thunder when the match finished which would suggest he wasn't best pleased with his performance 😆

As for Roger what more can you say? Just some sublime ball striking, hitting his forehand very big and dictating at any given opportunity. Routine and even though it was done and dusted in 40 minutes it was still pleasing on the eye. Just check the highlights above if you don't believe me 🙂 the point at 15-15 first game second set shows how well Fed was hitting the ball. Crushing it. 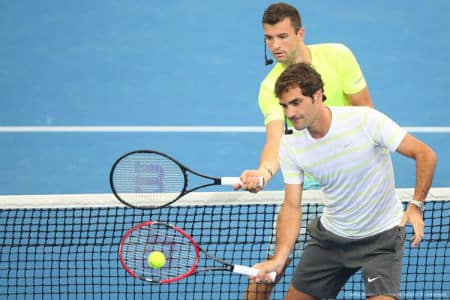 Next up is Grigor Dimitrov who saw off Martin Klizan in straight sets but did drop his service twice en route to a 6-3 6-4 win. I didn't watch but it looks as though Klizan did create some opportunities but fell short. Klizan plays a high risk game and can blow hot and cold in the blink of an eye so I think the more consistent guy won in the end which was Dimitrov.

Roger leads the H2H now 2-0 between the two and won comfortably in Basel late last year; on current form I fail to see how Dimitrov can live with Roger from the back of the court. Dimitrov is younger, probably a touch faster but he doesn't have the point construction skills of Roger, nor the understanding of the geometry of the court. He also doesn't possess the Federer forehand to really boss the points. We know he's talented, has titles and is billed by many as a future slam champion so a Dimitrov victory isn't impossible but I just don't see it happening tomorrow.