Five times US Open champion Roger Federer is through to the third round in New York after a 3-6, 6-2, 6-3, 6-4 victory over Damir Dzhumur under the roof on Arthur Ashe Stadium.

For the second match in a row, the Swiss had to recover from a dodgy start, hitting just eight winners compared to seventeen unforced errors in the opening set.  However, he was again able to hit back and despite being challenged throughout by the crafty Dzhumur, prevailed after 2 hours and 20 minutes to move into the last thirty-two at Flushing meadows.

He'll next face either Dan Evans who saw off Lucas Pouille in four sets after their match was delayed until Thursday due to rain. 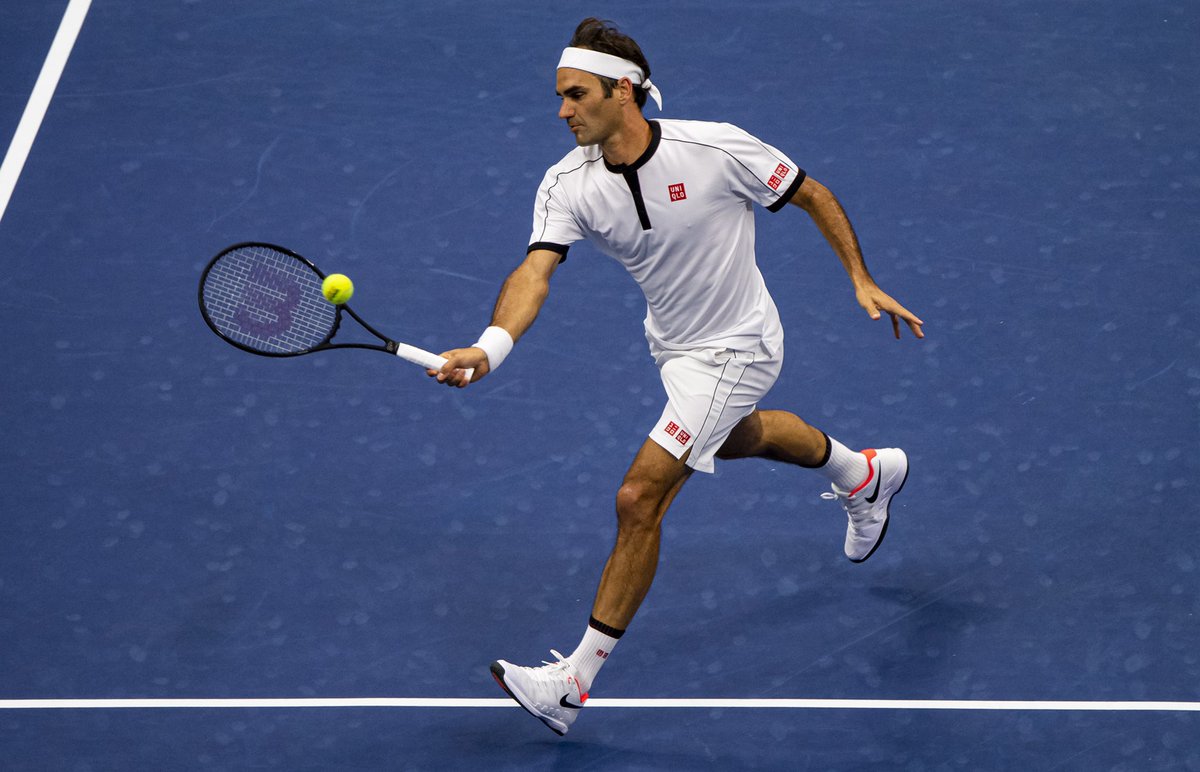 Federer won the toss and elected to receive. The Swiss won the first point with a stylish move forward and was able to make deuce but Dzhumur held for 1-0.

The second game looked to be following a similar pattern with Dzhumur winning the first point and then forcing deuce but this time the Bosnian broke serve, taking advantage of some forehand errors to move up 2-0.

Dzhumur then consolidated the break from 15-30 down to lead 3-0 and Federer had made nine unforced errors in three games. That was up to twelve by game four as Dzhumur broke again to lead 4-0.

Into game five and Dzhumur was unable to consolidate the insurance break as Roger finally got on the board, a hold to fifteen moved the score to 2-4. Suddenly the Swiss was virtually back in the set at 0-30 on Dzhumur's serve but he lost four points in a row to slip to 2-5.

Federer then held to fifteen to make 3-5 but Dzhumur had little problems serving it out, doing so to fifteen to bag the first set aided by Federer hitting seventeen unforced errors.

Set two saw Roger immediately slip to 30-40 but he made deuce after an entertaining point and after holding broke to lead 2-0.

A hold to love consolidated the break for 3-0 and the Fed express had started to find his groove, coming out on top of a cat and mouse point in game four and holding a breakpoint for 4-0 but Dzhumur saved it to hold for 1-3.

Another love hold thanks to some forceful groundstrokes put Federer up 4-1. However, Dzhumur fired down a love hold of his own and was able to fashion a break back point. Roger saved it with a big first serve and escaped the game to lead 5-2. That hold cemented the set as Dzhumur dropped serve to love and Federer was back on level terms, cutting his unforced error count to six.

Into the third and after Roger opened with a hold for 1-0. A lengthy game then saw the Swiss break for 2-0 and it was quickly consolidated for 3-0.

Another long game had Dzhumur scurrying around the court before eventually holding. The Bosnian then called the trainer and after Federer held for 4-1 he had a visit from the Doctor to discuss what appeared to be an exercise-related transient abdominal pain.

With Federer now beginning to enjoy himself, Dzhumur was again in a tricky spot at thirty all in game six but he held for 2-4. He then found himself with a breakpoint but a line judge correction meant the point needed to be replayed giving Federer a first serve.  The Swiss saved it and the two further breakpoints that followed with some slick execution to hold for 5-2.

Dzhumur then fired down a love hold to apply some pressure but Roger sealed the set with a hold to fifteen, firing down an ace on set point to take it 6-3, landing 77% of first serves and winning ten of fourteen points at the net.

An exchange of holds opened set four but in game three, after three solid points, Dzhumur played three terrible ones, hitting a double fault at deuce and then choosing to serve and volley behind a second serve to drop serve.

Roger then had to save a breakpoint, doing so with a drive volley off a big first serve and the five-time champion consolidated with an ace for 3-1.

The score quickly moved to 5-4 with neither playing making any inroads on the return before Roger served it out to thirty to move into the third round after 2 hours and 20 minutes. 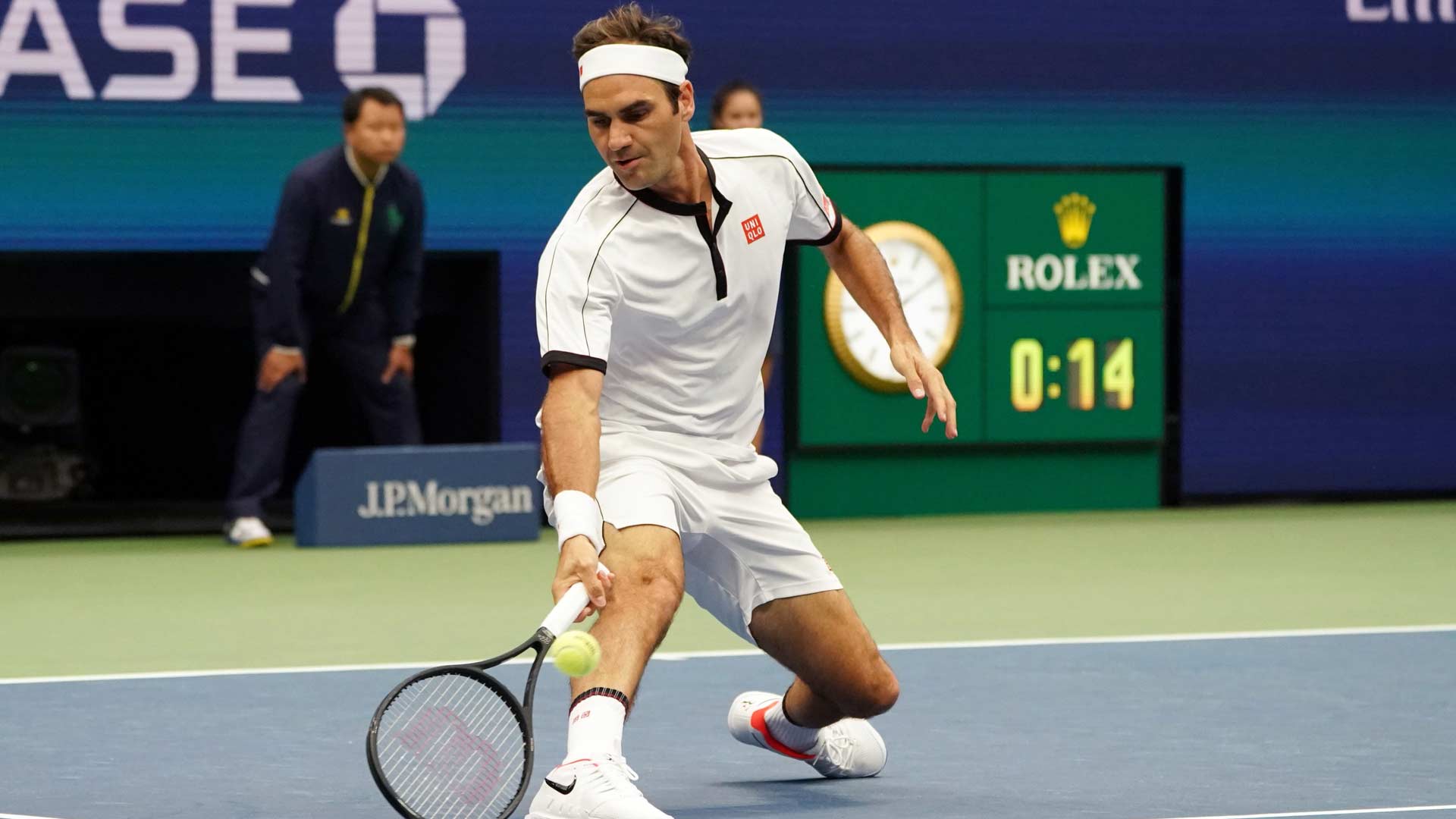 I got exactly what I expected from both guys, I knew what Nagal was going to give me, I knew what Damir was going to give me. So I didn't expect to hit fifteen to twenty unforced errors which is basically an entire set just donated. But look, they came out, they were well prepared and got me to do that, so I clearly have to play better from the get-go. I just have to take the positives out of it, once I lose that first set I do get better which is a good thing. Federer on his level against Dzhumur and Nagal

An almost carbon copy of the first round here with an extremely poor first set followed up by some slightly better play as the match wore on.

As I mentioned above Roger hit seventeen unforced errors in the first set and was ineffective on serve winning just 30% behind his second serve and only making 57% of first serves. Dzhumur didn't exactly serve well himself hitting four double faults but with Federer recording those sloppy numbers he easily won the first set.

However, just like the Nagal match, Fed was able to shake off the poor start to recover. The Amazon Prime coverage showed an interesting graphic that in set two he'd shaved five miles per hour off the forehand and boosted the net clearance by a good few inches, that cut the unforced error count to just six in set two, nine in set three and thirteen in set four. Much tidier and that extra margin righted the ship and allowed him to get back level.

Once Roger was back at parity, he was able to hit the ball better + play more freely and was the better player over the last three sets. Not a match you can call plain sailing as Dzhumur had eight break points in the match and made Federer's second serve look simple to return.  However other than being quick around the court and showing some good feel on the drop shots he had no weapons to scare Federer with and that made the difference.

I've been in that position many times where you go through a little phase when you don't start so well. Everybody asks you right away, what are you gonna do? And you're like I don't know, you just go back to the drawing board, just do the same things and you hope for a better outcome.

I don't think there's per se a secret to a good start other than warming up well, being well prepared mentally, not underestimating your opponent, I did all that, you know me I will always do that. So when it happens like this in back to back matches it's a bit frustrating more than anything especially when the level is that low, there is that many errors and the energy is not kinda there, yeah I can only do better which is a great thing moving forward. Federer on his poor starts in back to back matches

Predictions vs Evans or Pouille

Next up is Dan Evans who pulled off an impressive win against 25th seed Lucas Pouille. The Brit could have come through in straights, holding a 4-2 lead in the third before losing the tie break but he recovered to win through in four and make the US Open third round for the third time.

Federer has played Evans twice before on tour, and once at the Hopman Cup. Their most recent meeting was at this years Australian Open where Dan forced Roger into two tie breaks.

The two have also practised together many times, with Roger inviting him to Switzerland on an all-expenses-paid training camp ahead of the French Open this spring; so they're both familiar with each other's games and have reportedly become decent friends.

While Evans hasn't got a set in two previous meetings, I like his chances to cause Federer some problems tomorrow. In their previous matches, Evans has let the occasion get to him a bit and not played his best tennis but given Federer's form in his first two matches, I can see him getting a set.

The Brit has a decent serve for someone of his height, has a ton of variety and likes the conditions in New York, holding match points against Stan in the year he won the US Open.

Fortunately for Roger, it's a bit of a disadvantage for Evans having to play two days in a row however and he isn't the best on the big points so I'd be surprised to see an upset but stranger things have happened.

What did you guys think of the win against Dzhumur? Predictions against Evans? Let me know in the comments.