Roger Federer is through to the Quarter Finals at the Rolex Shanghai Masters 1000 after coming through a high-quality encounter against David Goffin on Thursday evening.

He will next face Sascha Zverev who defeated Andrey Rublev in the final match of the day at the Qizhong Forest Sports City Arena. 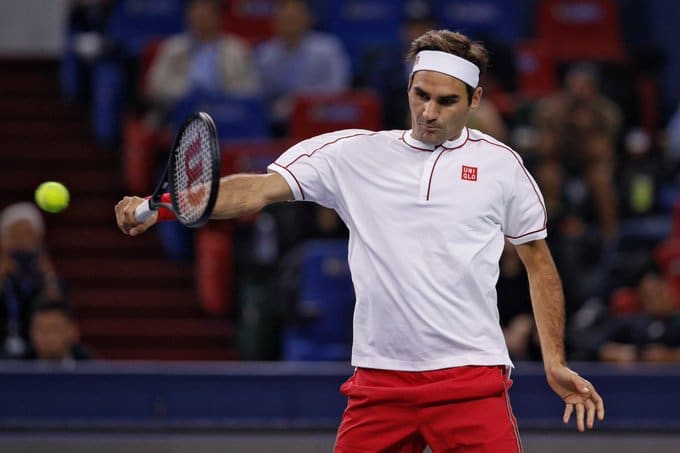 Goffin won the toss and elected to receive. The pair exchanged love holds to kick off the opening set, but in game three, Federer had to save a breakpoint before coming through an eighteen point game to finally hold for 2-1.

The Swiss then made a deuce of his own, aided by two double faults from Goffin, but the world number fourteen held to level at 2-2.

Game five saw Federer restore some order with a love hold, but it took some crisp ball-striking to hit past the speedy Goffin, who was playing at a very high tempo. Goffin kept the pattern going with a love hold of his own to level at 3-3.

At 40-0 in game seven, Roger had won nine straight points on serve, but the Belgian reeled off three of his own to make deuce before some smart serving gave Federer the hold for 4-3. Goffin's third love hold of the set saw him quickly level at 4-4.

A comfortable hold put Federer within one game of the first set, and he was able to get even closer to it with a set point, but Goffin saved it and went onto hold for 5-5.

The Belgian won the opening point of game eleven and was in with half a chance at 15-30. Federer made 30-30 but then lost his footing by slipping on a sweat patch on the court that gave Goffin breakpoint, and he converted with a passing shot to lead 6-5.

Could Goffin serve it out? A sick point gave Federer 15-30 and indicated David might have difficulties, but the Belgian won the next two to hold a set point. However, he couldn't convert, and after double-faulting on his second set point, plus missing a third, Federer broke back to force a tie break.

Into the breaker and a double fault gave Goffin the early mini-break for 1-0. Federer retrieved it but then got caught in two minds in the forecourt to miss a volley for 1-3.

Goffin won his next two service points to lead 5-2, but Roger came up with two excellent points to keep within touching distance at 4-5.

The Swiss then restored parity at 5-5 and could have done more with the pass on the next point, but Goffin was able to fashion his first set point. Roger saved it with a bullet inside out forehand clocked at 154km/h to save it. However, the Belgian wasn't backing off and a ripped cross-court backhand to lead 7-6.

A crazy point ensued with Fed finding the line before Goffin went wide with a backhand, Federer won the next to lead 8-7 and ripped in inside in forehand winner to take the opening set.

Into set two, and Goffin was immediately in trouble at 0-30, but Federer let him off the hook as he held for 1-0.

In the next game, Roger slipped to 30-40 but recovered to level at 1-1, and in game three created a breakpoint of his own, winning three straight points from 15-40, but Goffin saved it and held to lead 2-1.

A love hold from the Swiss put him level at 2-2, and for the second time in the set, he had Goffin on the ropes at 0-30, but just like the first game, Goffin reeled off three points to hold game point at 40-30. The Belgian thought he'd escaped when a backhand down the line was called good, but Federer correctly challenged to make deuce and won the next to hold a breakpoint. However, Goffin saved it and fended off another deuce to hold for 3-2.

Into game six and the Swiss held to thirty to make 3-3, and in game seven, a couple of net cords caught Goffin out, as he dropped serve for 3-4. A love hold consolidated the break to put Federer one game away at 5-3.

Goffin held to force Federer to serve it out, hitting a one-handed backhand flicked pass which was arguably shot of the day but there were no slip-ups from the Swiss as he served it out to fifteen, bombing down an ace on match point to seal it. 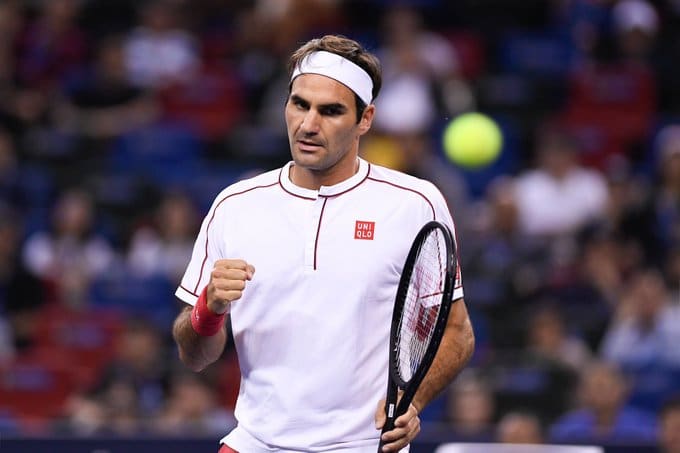 It was tough. He served for the set at 6-5. We both had chances but he probably had a few more I must admit. I had to play some very accurate shots and it went very close to the lines. They could easily have gone another way I know that. I was a bit fortunate to win that first set but I played ok and I fought extremely hard. Sometimes it falls your way. I have had a good season and served well at the end. The first set was certainly crucial to put me in the lead. Federer on his win over Goffin

A highly enjoyable match, and both guys played at such a high tempo, which made it great to watch. Goffin came out with an aggressive gameplan to try and get Federer off the baseline, but the Swiss was more than up to the task, giving up very little ground and going for all his shots.

The fact that both players were looking to take charge meant it was all about high-risk shotmaking, which is the best type of tennis to watch, and some of the plays Federer came up with were just immense. Drive backhand volleys that are so hard to execute were drilled into the corner, and that inside out forehand to save one of the set points in the tie break was top class. Flat, barely any margin, and 154 km/h. Boom!

Like the first match, Federer again had a good serving day landing 72% of first serves and faced just three breakpoints. I thought the key to the match was that he never let his level drop throughout both sets. It was up to Goffin to try and play above his station, which he managed in large parts of the match, but whenever Goffin's level dipped, Roger's was right there to take advantage.

It could have quite easily gone three with so many close calls, shots just in and a couple of net cords helping Federer in the second set to break, but I thought Fed fully deserved the win as he made more stuff happen when it mattered and never really hesitated on the more significant points.

Next up is Sascha Zverev who continued his improved post Laver Cup form with a straight-sets win over hard-hitting Andrey Rublev. The German comfortably won the first set before overcoming a second set blip getting broken when serving for it to eventually prevail in a tie break.

Zverev sealed the Laver Cup for Team Europe with a clutch tiebreaker against Raonic and then went on to make the semi-finals in Beijing so he's playing well and the H2H is tied at 3-3 against Roger.

The two have only met on outdoor hard courts once before with Zverev defeating an injured Federer in the Rogers Cup final in 2017 but I make Federer the favourite in Shanghai based on what I've seen of him so far.

Zverev is usually fired up to play Fed so it could be tricky but I think Fed will push him too far back behind the baseline to take a charge.

What did you guys think of the win against Goffin? Predictions vs Zverev? Let me know in the comments.