This is a guest post from Adam Gale, a huge tennis fan who blogs at Tennis Martian. You can also follow him on twitter – @tennismartian. I found it a very interesting read and I hope you do too. Without further ado…

Does Roger Federer have a claim to the greatest longevity in the Open Era? It’s tempting to assume he does. After all, the Swiss soars in most comparisons with the greats of the past. The very fact that he is performing so well at 31 years old –reclaiming the number one spot, winning his seventh Wimbledon –might make the answer an obvious yes, to his younger fans.

A brief look at the history books, however, makes it clear that Federer has a long way to go if he is to be the longest-lasting champion of the Open Era. Is he really close to Andre Agassi, who reached his last grand slam final at 34 years old – 15 years after reaching his first? Or Jimmy Connors, who retired at 44, having played over 1500 professional matches (Federer has now contested 1066)? On the surface, it would seem, he isn’t close at all.

But what does longevity mean? If a former champion is still around at 40 years old, losing every match they play, does that add in any way to their legacy? Surely it’s about more than mere survival? I believe that if you look at meaningful longevity –how long a player lasts as a major force, at or near their best –Roger Federer is far closer to the top of the list, and in fact has the potential to move into first place.

Let’s look again at Jimmy Connors. The American was a serious threat both at the slams and in smaller tournaments until Wimbledon 1984, the last time he reached a major final. Before this point, he had won over 85% of his career matches (984/1147), and had taken 104 titles, eight of them majors. From mid-1984, until the end of 1989, however, his winning percentage dropped noticeably, to 75% (216/287). Though he reached six major semi-finals in this period, he lost each of them easily in straight sets, and won only four titles overall. In the ‘90s, he won no titles, and fewer than half of his matches (42/85).

Ivan Lendl, another player known for his longevity, saw his win-loss record fall dramatically from 87% (889/1038) up to and including Wimbledon 1990, to 67% (182-62) between then and his retirement in 1994. Even Andre Agassi, who remained a significant force right up to his last US Open final in 2005, had begun to suffer a decline in consistency two years previously (his career win-loss before the clay court season of 2003 was nearly 80%; after then it was closer to 74%).

In each of these cases –and these are the three men who have a serious claim to greater longevity than Federer in the Open Era –decline preceded retirement by at least a couple of years. In each of these cases, indeed, this decline set in between the ages of 30 and 32, after somewhere between 993 career matches played (Agassi) and 1147 (Connors).

Suddenly, they don’t seem so far ahead of Federer, who has yet to decline at 31. In fact, Federer’s winning percentage so far this year -87% (64/73) –is better than at any time since 2006. If he were to persist at anything remotely like this level for another full year, he would effectively match Connors, who should still currently be considered the most durable male champion of the Open Era. If Federer were to last two or more years, he would go ahead of Connors in terms of meaningful longevity.

I believe Roger Federer is not only able but in fact likely to do just that. Firstly, he clearly still loves what he does. He loves the game, he loves the competition and he loves the lifestyle. Mental burnout –such as took down Borg or Wilander -does not seem likely. Secondly, the Swiss seems to be the freshest 31 year-old tennis player in living memory. His smooth and efficient style puts very little stress on his body, and his approach to training and scheduling has always been smart. With a little luck, this has enabled him to avoid the injuries -little and large -that had started to wear out Connors, Lendl and Agassi by their early thirties.

Of course, just because he could last a few more years, it doesn’t mean he will. Staying free from injury always involves an element of luck, and so far he has been lucky. Furthermore, his twins will presumably start school in a couple of years. For Roger and Mirka, who seem to love the itinerant lifestyle of the tennis circuit, this might be a deal breaker. If the girls can’t travel, maybe Mirka can’t travel; if Mirka can’t travel, maybe Roger won’t enjoy the jet setting quite so much any more. 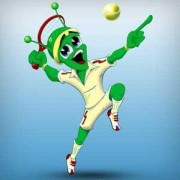 Adam Gale, aka TennisMartian, is a tennis writer and fan with particular interests in the history of the game and using statistical analysis to better understand it.