Serve speed has and continues to be one of tennis’ major talking points. Even in the early 1920s, the talk of the town was Bill Tilden's cannonball serve, which was said to have been clocked at 163.3 miles per hour.

Tilden used that weapon to dominate the other players of that era. While a big serve today doesn't guarantee success on tour, players like Pancho Gonzalez, Stan Smith, Roscoe Tanner, Pete Sampras, Andy Roddick, and the Williams sister have used their triple-digit serve speeds to blow away opponents and win Grand Slam titles.

While reports of big serves from yesteryear are hard to verify, the introduction of oversize racquets made from graphite in the 1980s, saw the average players serve jump up significantly in speed, almost to the point that the human eye could no longer keep up with the ball.

That saw the introduction of the famous Cyclops’ infrared beams, and later the Hawk-Eye system, to help line judges call the lines on serves.

Assisted line judging technology wasn't the only tech to be introduced though, and at the International Players Championships in Miami during the 1989 season, the sport debuted a piece of kit that measured the speed of a serve —a radar gun.

Previously serve speeds had been measured with technology that was unreliable like a ballistic chronometer but the radar gun offered faster, more precise readings, and perhaps, more importantly, gave the tour a numerical talking point that could be used to promote the game and it's star players.

This post looks at the world’s fastest men’s and women’s tennis serves recorded throughout history, how important a big serve is and whether or not the players winning the big titles are also the ones with the biggest serves. Let's take a look.

Contents hide
1 Quick Facts
2 What is the Fastest Tennis Server Ever Recorded?
3 Who are the Fastest Servers in Tennis?
3.1 Men's Top 42 Fastest Serves Ever (ATP)
3.2 Women's Top 21 Fastest Serves Ever (WTA)
4 Unrecorded Fast Serves – Reality or Folklore?
5 How Fast is a College or High School Serve?
6 Does the Fastest Serve Mean the Best Serve?
7 What Serve Speeds Do the Top Players in the World Serve At?
7.1 Novak Djokovic
7.2 Rafael Nadal
7.3 Dominic Thiem
7.4 Roger Federer
7.5 Stefanos Tsitsipas
7.6 Daniil Medvedev
7.7 Alexander Zverev
8 Does Height Help When It Comes To Serving?
9 Can You Measure Your Own Serve Speed?
10 Who Has The Best Serve?

What is the fastest male tennis serve ever recorded?

What is the fastest female tennis serve ever recorded?

What is the fastest serve ever recorded at Wimbledon?

What is the Fastest Tennis Server Ever Recorded?

This bullet of a serve came at three match points down during his second-round match against Uladzimir Ignatik from Belarus. Groth lost the match 4-6, 3-6. You can see his serve in the grainy video below:

Groth has a bulky muscular build but rather than a short, stocky guy; he stands at 6’4” (193 cm) giving him both plenty of raw power and long levers to get the racquet through at high speeds.

Some clearer footage from Groth's match against Federer at Wimbledon in 2015 where he clocked 147 mph on serve also highlights that his record-breaking serve was no fluke. Check out that ground force activation and how he gets his body weight through the shot.

Is this the fastest serve ever recorded?

Yes and no. Groth's serve took place at Challenger event, and the ATP does not formally recognise service speed records made at Challenger level due to lack of uniformity, availability, and calibration of radar guns.

Nevertheless, the serve speed of 263 km/h (163.4 mph) recorded by Groth in Busan was measured using ATP-approved equipment, and other data gathered appeared within a normal range.

Who are the Fastest Servers in Tennis?

While the ATP, WTA and ITF don’t maintain or publish official serve speed rankings, a complete dataset belongs to SportsMEDIA Technology (SMT), who have been tracking serve speeds for more than 20 years.

Of course, serve speed isn’t captured on every court at every tournament, and sometimes the technology being used isn’t the same at every venue. Still, there is enough data out there to know what's physically possible and who the biggest servers are on tour.

Below you'll find a list of the fastest servers in ATP history. Players can only be listed once with their fastest serve being the one in the table.

Below you'll find a list of the fastest servers in WTA history. Players can only be listed once with their fastest serve being the one in the table.

Before the radar gun came on the scene in the 1980s, serve speed had to be measured using different methods that weren't quite as accurate.

For example, Roscoe Tanner's serve speed was registered at 153 mph at Palm Springs in 1978 during the final against Raúl Ramírez using older equipment.

It's also said that Bill Tilden, pictured above, had a serve that was clocked at 163.3 mph but unfortunately there is nothing concrete to verify that.

So is this the fastest serve with a wooden racquet or is it just folklore that's had a few miles per hour added over the years? With the right technique and biomechanics then we know 150mph is possible but 163mph? Unlikely.

How Fast is a College or High School Serve?

Like the ATP and WTA tour, at college and high school level you'll find serve speeds range widely. While average first serve speeds on the ATP tour will be higher than college players, there are plenty of college and recreational players that can fire down super quick serves.

Players like Steve Johnson who came through the college system regularly hit 130 mph on serve during their Division 1 years and with the right technique, kinetic transfer and enough practice, breaking the 130 mph barrier is not out of reach for a lot of athletes, even if the rest of their game isn't up to scratch.

Does the Fastest Serve Mean the Best Serve? 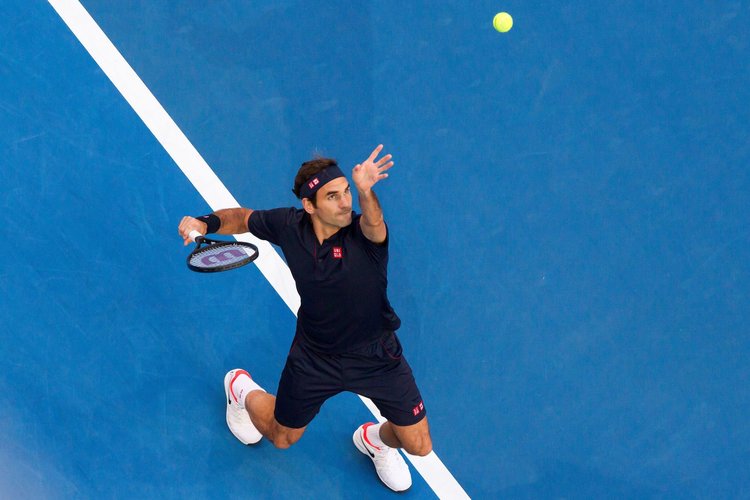 While a fast first serve is undoubtedly a useful tool in the arsenal, tennis is a multi-faceted game and setting records on the speed gun doesn't always translate to success.

Take a look at the fastest recorded server of all time, Sam Groth. He made it to 24 in the world but never made it past the third round of a Grand Slam. While his serve was a key driver in achieving that ranking, it wasn't enough to propel him to the upper echelons of the sport.

Compare that to two-players who don't even feature in the table above, Novak Djokovic and Rafael Nadal. They have 37 Grand Slam titles between them but rarely go above the 125 mp/h mark. However, they have both hit top speeds of 136 mp/h (219 km/h) and 135 mp/h respectively which is not to be sniffed at.

Federer, who does make the list of the quickest ever, said in an interview in 2005 that he never serves at 100% speed as you lose accuracy. He believed that when you're around the 120 mph mark, then that's quick enough and accuracy matters more.

What Serve Speeds Do the Top Players in the World Serve At?

The highest-ranked players naturally have good serves, but rather than the raw speed they often rely on placement, consistency and variety to win matches. Let's take a look at what sort of speeds some of the current Top 10 generates.

Djokovic has one of the most improved serves on tour and under Becker's tutelage, turned a weakness into a strength.

The Serb ditched the yippy bowling motion into one of the cleanest techniques going, and while he isn't setting speed records, his pace, and accuracy are a handful for all comers.

Out of all Nadal's attributes on a tennis court, his serve is probably the least impressive in terms of technique, spin, variation and speed but when it's working it does bag him some free points.

While not the quickest, he's tinkered around with it over the years, notably at the 2010 US Open where he added ten miles per hour more than we'd seen before and that is where he hit his career fastest serve of 135 mph.

Thiem's serve has undergone several changes over the years, moving from pinpoint stance to platform, and tweaking his motion between a long fluid swing, to an abbreviated Monfils or Roddick style then back to a full fluid motion

Undoubtedly one of the greatest servers of all time, Roger Federer is capable of hitting serves in the 130 mph range, with his fastest ever being 143 mph.

Rather than raw speed, Federer relies more on variety and states he rarely serves at 100% speed due to the associated drop off with being able to land it accurately. Serving at high speed also puts a significant strain on the body, which with a history of back problems is something the Swiss is keen to avoid.

Does Height Help When It Comes To Serving?

The answer here is yes, and the data quickly proves it. Look at the graph below that shows the relationship between speed and height for the ten fastest serves of all time:

Can You Measure Your Own Serve Speed?

The costs of radar equipment a few years ago were prohibitively expensive, but as technology has advanced, prices have come down, and gadgets such as the Pocket Radar have made it more accessible.

The Pocket Radar is priced at $299 to $399 so for an individual it's probably not worth it as I think you would use it once in a blue moon. However, for a coach or a group buy at a tennis club, then it's a fun little tool and a way to track improvement if you are trying to ramp up the mp/h.

Several apps promise to track server speed; this is usually done by tracking the ball via frames per second and working out distance over time. They likely aren't the most accurate but for a bit of fun they're worth a go.

Who Has The Best Serve?

I listed who I thought the Top 5 servers of all time were a few years ago, that list is due an update but here are my takes on the following:

Who has the best serve?

Who has the hardest serve to return?

Unfortunately, I haven't faced it, but it has to be John Isner.

Who has the most variety on serve?

Roger Federer, all from the same ball toss for great disguise.

Who has the most accurate serve?

Who has the most reliable serve?

How quickly do you serve? Have you faced any big servers at club level? Let me know in the comments.

How Much Do Tennis Players Make?

Where Do Tennis Players Pay Taxes?

Is it Racquet or Racket?