The Swiss, bidding for his ninth title had two match points at 8-7 in fifth but Djokovic hit back before prevailing in the first twelve all fifth set tie break of this year's men's singles tournament after 4 hours and 55 minutes. 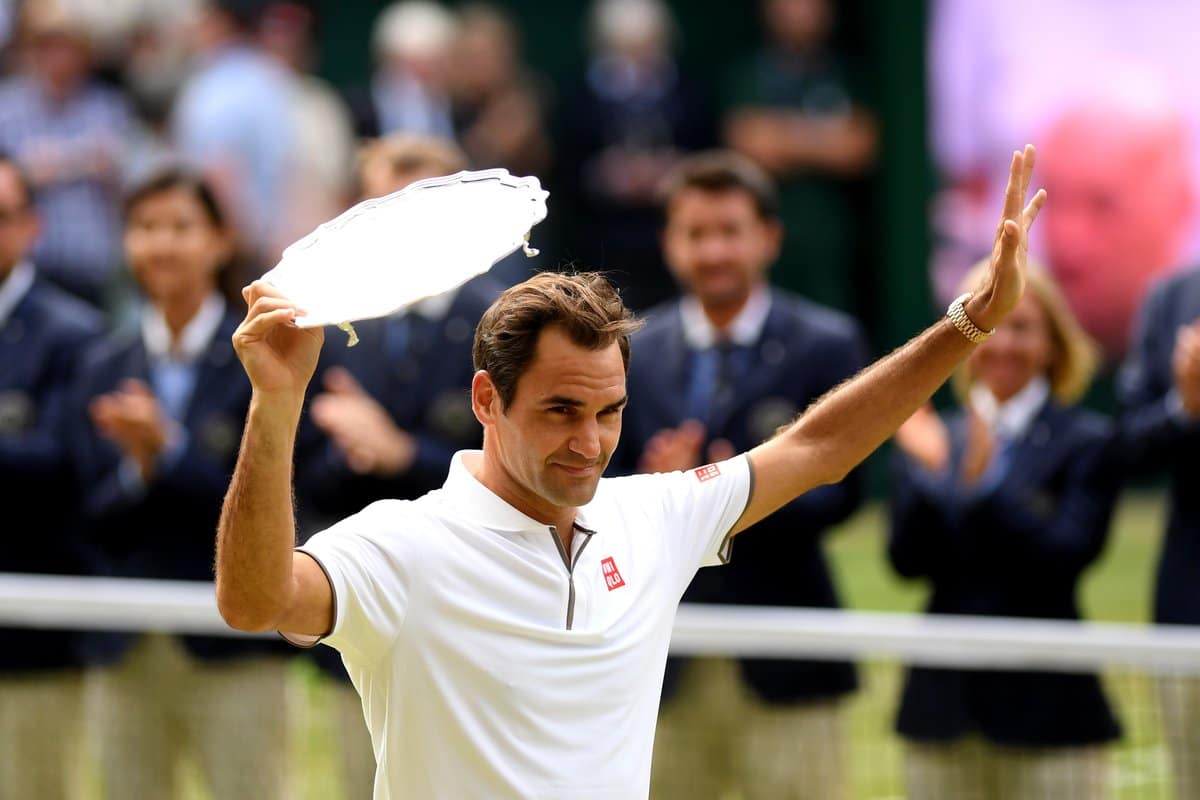 Federer won the toss and elected to serve. A hold to fifteen with two aces saw him hold for 1-0.

Djokovic was quickly level with a love hold, responding nicely to some well struck Federer returns from the baseline.

Game three started with a classic Djokovic point with his flat backhand working over Federer for 0-15 but the Swiss recovered to hold for 2-1.

Djokovic kicked off game four with a double fault but was quickly ahead 40-15 before Roger took the game to deuce. Two more game points came Novak's way but Roger was able to create the first break point chance of the set. Unfortunately, he overcooked the forehand after getting the ball he wanted off a low angled slice. Djokovic then held to level for 2-2.

At 0-30 that missed chance looked like may play a part but Roger delivered two big serves to make thirty all before winning the next two points to take a 3-2 lead.

Djokovic was again quickly level with a hold to fifteen but Roger went one better with a speedy love hold for 4-3 that featured two successful forward moves to the net.

Another Djokovic hold to fifteen put him level at 4-4 before Roger held to thirty to move within one game of the set.

Two peRFectly worked points then put Roger up 0-30 in game ten but Djokovic knuckled down despite double-faulting at 40-30 to hold for 5-5.

The Serb soon had a half chance of his own at 15-30 after a poor Federer drop shot but Roger came up with some line finding groundstrokes to hold for 6-5. A love hold from Djokovic forced the tie break.

Into the tie break and after winning the opening point Roger should have been up an early mini-break but he blazed a forehand long. Another forehand long gave Djokovic a 3-1 advantage but Federer hit back, recovering the mini-break and taking one of his own en route to forging a 5-3 lead.

Another mishit forehand let Djokovic back in for 4-5 and he reeled off the next three points to edge an extremely close first where both players were hard to separate.

Set two saw Roger break immediately for 1-0 and after consolidating the break he was quickly up a double break as Djokovic's level went off the boil.

Roger then held to thirty to insure the double break for 4-0 before Novak finally got himself on the board for 1-4.

Another hold to thirty put Roger up 5-1 and he was soon level at one set apiece after another loose Djokovic service game saw him drop the set 6-1.

The third set started with a solid hold from the Swiss to fifteen for 1-0 before Djokovic levelled to thirty. Roger then fired down a love hold to put the pressure back on the number one seed but he responded with a hold to fifteen for 2-2.

The pair then exchanged back to back comfortable holds for 4-4.  Into game nine and Djokovic had his first chance of the set at 15-30 but Roger fired down some big serves to take a 5-4 lead.

It was then Roger's turn to fashion 15-30 and even though Djokovic came up with a smarty body serve for 30-30, Federer produced a ridiculous half volley to create a set point.  A line finding serve from Djokovic saved it and another smart body serve helped him escape the game for 5-5.

Roger quickly held for 6-5 but after winning an epic 26 shot rally with a slick backhand pass up the line for 0-15, Djokovic reeled off the next four points to force a tie break.

Into the breaker and some mistimed backhands from Federer allowed Djokovic to establish a 4-1 lead. A lengthy rally won with a trademark Djokovic crosscourt backhand put him up 5-1. Roger was able to recover one mini-break to move to 4-5 but when a slice drop shot drifted wide for 4-6, Djokovic sealed the tiebreak 7-4.

After a brief toilet break for Federer, set four kicked off with a Djokovic hold to fifteen. Roger then had to dig in to hold from 15-30 to level. Novak then delivered a love hold for 2-1 and in game four he was again in the service game forcing deuce but a slick Federer half volley pickup gave him game point and he levelled for 2-2.

A good pass brought up the first point for Federer in game five and after Djokovic double-faulted for 15-30, Roger set up two break points, finally converting thanks to a full-blooded backhand return to lead 3-2.

A love hold consolidated the break and like set two, Federer secured the insurance break for 5-2 when Djokovic leaked some errors from the baseline.

With Roger yet to face a break point in the match, he faced his first in game eight. He saved it with a backhand down the line after a 35 shot rally but Djokovic was able to convert his second of the game to recoup one of the breaks.

Novak then held to fifteen to get within one game of levelling but Roger wasn't to be denied forcing a fifth, slamming down a love hold to take it to a decider.

The fifth set started with an exchange of holds and in game three Roger had a half chance at 30-30 and deuce but Novak escaped.

The Serb then won the first point of Federer's next service game with a net cord and soon had two break points. Roger saved both hitting a big inside out forehand to make deuce. Another breakpoint had to be saved with an ace before another ace sealed the game for 2-2.

Djokovic quickly moved up 40-0 in game five but Roger reeled off three points to force deuce. A clutch serve from Djokovic gave him game point and he held for 3-2.

Federer then found himself down 0-30 and 15-40 after Djokovic connected on some returns and although he saved the first, Djokovic broke for 4-2.

An immediate response was required from the Swiss and he was able to hold breakpoint immediately when Djokovic double-faulted at 30-30. A forehand sailed long to miss the chance but a second presented itself and Djokovic went long and Federer was back on serve.

At 15-30 in game eight Federer was in more trouble but a net cord of a big inside in Djokovic forehand took the ball wide and he held with an ace to make 4-4.

A drop shot won the first point for Roger in game nine but Djokovic recovered to hold to thirty for 5-4.

Roger then needed to produce some clutch play to hold for five all, hitting a  great forehand and volley for the 40-30 point. Into game eleven and a double fault gave Federer 15-30, Djokovic then produced a diving finish to a lengthy point and went onto hold for 6-5.

A sharp second serve at thirty helped Federer again level but Djokovic reeled off a routine service game to hold for 7-6.

Federer then delivered a hold to fifteen to level and was able to break Djokovic with a good return at 30-30 then a pass for 8-7.

The Swiss fired two aces to bring up two match points at 40-15 but he couldn't find another first serve rushing an approach on the second match point and Djokovic broke back for 8-8.

Novak then held to thirty to put huge pressure on Federer. but Roger held to fifteen for 9-9. The pair then exchanged holds for 10-10.

Federer had a thirty all chance in game twenty but Djokovic held and three quick holds later the match moved into a fifth set deciding tie break.

Into the breaker and a backhand long gave Djokovic the opening point on serve before Roger missed a tricky half volley to slip down a mini break.

Two smart points on serve gave Djokovic 4-1 lead. Roger won his next two points on serve but Djokovic had the steely focus to produce a serve + forehand combo and then a backhand up the line to lead 6-3.

An acute Djokovic backhand was then called out but a challenge showed it was in, on the replayed point a framed Federer forehand flew miles out of the court and Djokovic had sealed the deal. 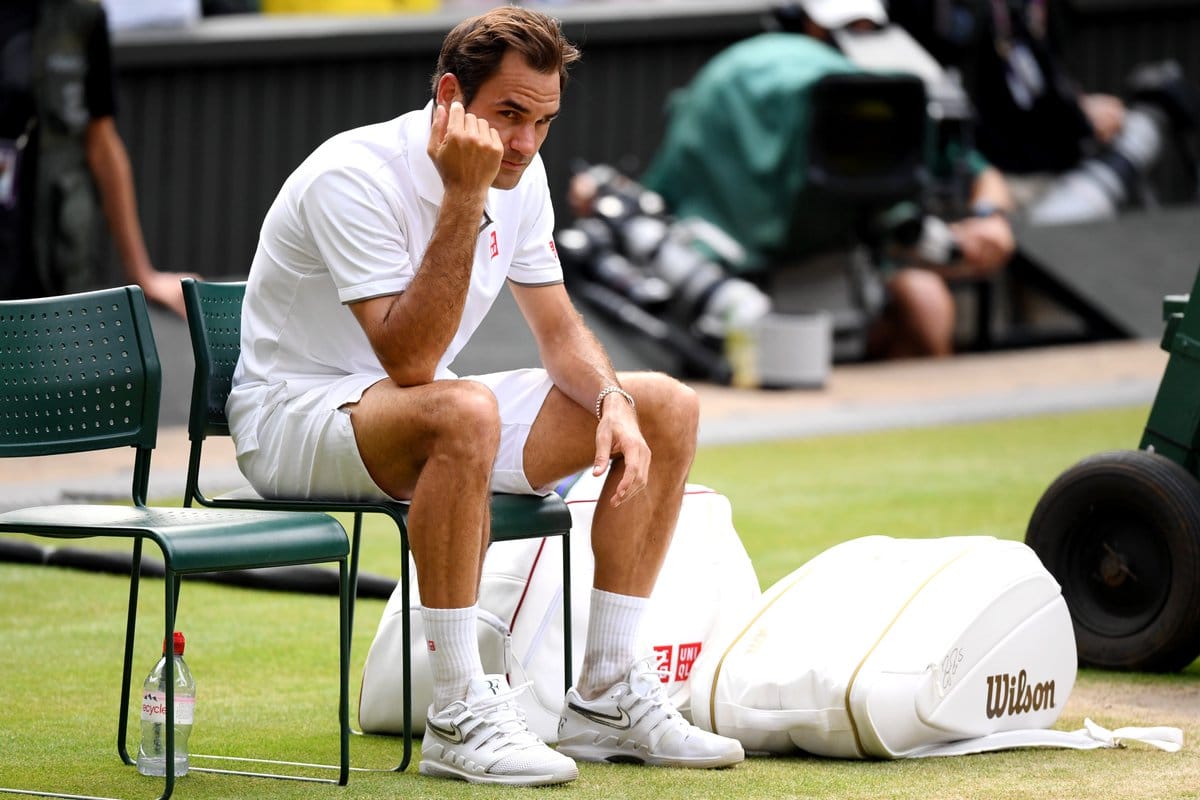 It was one shot I guess, I don't know which to pick your choice. I don't know. I was still happy to be at 8-8, try to see the positives , you try to take it as a good thing, that I'm not down a break in the fifth and the match is not over. If I could have picked it, to be 8-8 in the fifth before the match I'd take but yes, it was definitely tough to have those chances. I know what I did well, how close I was. I think I can be happy with my performance. I don't want to be depressed about an amazing tennis match.  Federer on his loss to Djokovic

Where to begin with this one! Putting the fan business aside of it being awful to see Federer lose tight finals. In terms of tennis, it was a match where there wasn't really anything new to learn.

In terms of how it panned out, I'm not hugely motivated to recap it but here are my notes from each set for those interested:

My main takeaway is it was a good match and a great performance/tournament by Roger at 37. But like he said, a missed opportunity which is why it's disappointing. All the talk amongst fans will be mental this, choke that and they are certainly valid points but I thought Roger gave everything he had on the day and unfortunately it wasn't enough.

I said in the comments on my last post if this match was like a chess match then Federer would have to sacrifice the Queen to give himself a chance of winning. You have to be prepared to lose and you either win brilliantly or lose brilliantly. If you don't act, you simply lose slowly with guaranteed certainty. Was it a brilliant loss? Too early to tell and Federer was a little too passive in periods when Djokovic wasn't at his best but I'd take a five-setter over a routine 2, 2 and 2 any day. The problem for Federer is that victory in tennis, like chess, requires solid positional play and Djokovic is a grandmaster.

What are you guys verdict on the match? Are you a fan of the twelve all tiebreak? Let me know in the comments.