No Cincinn8ti for Roger Federer as Novak Djokovic comfortably won his first title at the Western and Southern Open with a 6-4 6-4 victory in 1 hour and 24 minutes.

The win sees Novak record his third straight victory over the Swiss and move to 24-22 in the H2H. Along with that he's also now won every Masters 1000 which is a pretty big deal. I'm not sure where to rank it in terms of his career achievements but it's certainly up there as aside from Lendl nobody else has managed to do it with both Federer and Nadal two titles short. 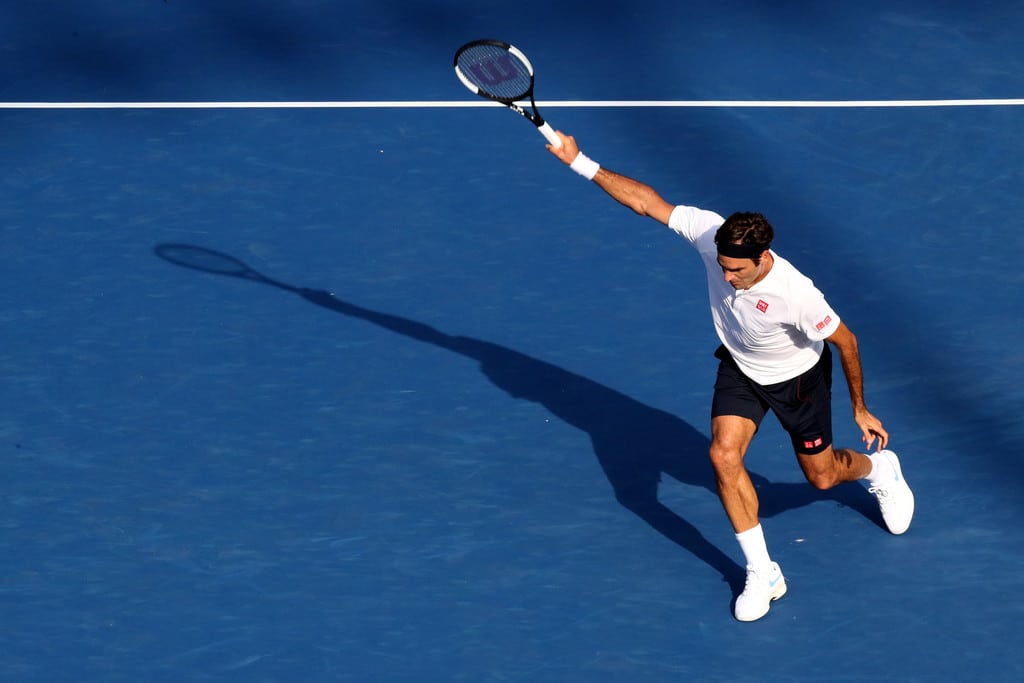 Federer won the toss and elected to serve; after playing two sweet points for 30-0 he was soon facing break point, that was saved with a good serve and a second break point snuffed out with an ace en route to holding.

Djokovic responded with a love hold for 1-1 to put the pressure straight back on the Swiss. However, he was able to reel off a love hold of his own winning the game with a nice backhand drive + backhand smash combination. The pair then exchanged comfortable holds but in game seven a costly double fault handed Djokovic break point which he converted; Roger was left swishing at thin air and receiving an audible obscenity warning after the ball skipped through off the line.

That one break proved decisive and Djokovic went onto serve out the set 6-4 losing just two more points on the return. Into the second set and Federer needed to snatch momentum, a hold to 30 got him on the scoreboard and a Djokovic wobble from 40-15 including a double fault on break point put him up 2-0 against the run of play.

The Swiss had been impenetrable on serve during the week but two loose points saw him slip to 0-30 and he again fired down a double fault to give Djokovic break point which he duly converted. A love hold put Djokovic back on level terms and like the first set in game seven, he took charge, once again taking advantage of a Federer double fault to break for 4-3 and cruise to the title to take it 6-4, 6-4 in 1 hour and 24 minutes.

It was definitely not my best day on the return. That's it. It was just awful. But it's okay. He served well. But missing every second serve on the forehand side, I don't know what that was about. I don't even want to look for reasons why it happened. I just think it did. Novak totally deserved to win today. This was not good enough. It's okay. Good week, but I'm happy it's over and I need to rest. So it's all good.

An uninpspired performance from Roger here and he was second best in all areas. It was always going to be a battle of what comes out on top: Djokovic's defense or Federer's attack and it whilst it was certainly the former, Djokovic was dominant in all areas. Just a very efficient match from him after playing four three-setters in a row; he was solid off the baseline, defended well, served consistently and was basically untested throughout. If you can't put pressure on his serve then he's going to double down in his return games and cause way too many problems.

As for Roger what can you say, it was one of those matches where it never rains but it pours. I'm hard pressed to find any real good moments in the match; some nice points in isolation but in terms of it being competitive or high quality then it wasn't. Looking at the numbers they make pretty terrible reading with Djokovic having 72% of his second serves completely unreturned. Combine that with 39 unforced errors (20  of them off the wobbly forehand wing) and a double fault in every game he was broken it all adds up to a miserable day at the office.

Explanations? Who knows but I think his level has dropped a bit in recent months. Fitness wise he's looking great but his tennis hasn't been as strong as in 2017 or earlier this year. A bit too early to be writing an obituary for his game of course so I think he just has to keep plugging away and see what happens at the US Open. The good news is surely he can't return as poorly as he did last night, or can he? 😆