Grigor Dimitrov is through to the last four at Flushing Meadows after coming from two sets to one down to surprise the five-time champion Roger Federer 3-6, 6-4, 3-6, 6-4, 6-2.

The Swiss, heading into the match with a 100% record in the H2H against his opponent was a big favourite and after moving up two sets to one looked a solid bet to make the semi-finals.

However, Dimitrov was able to disrupt Federer from the baseline and it became increasingly clear that the 3rd seed was not in his best shape physically, later admitting to tweaking his upper back earlier in the day.

The result was a considerable number of mistimed and shanked balls that produced 60 unforced errors from the Wilson Wand and a less effective serve that allowed the Bulgarian to take advantage to come through. 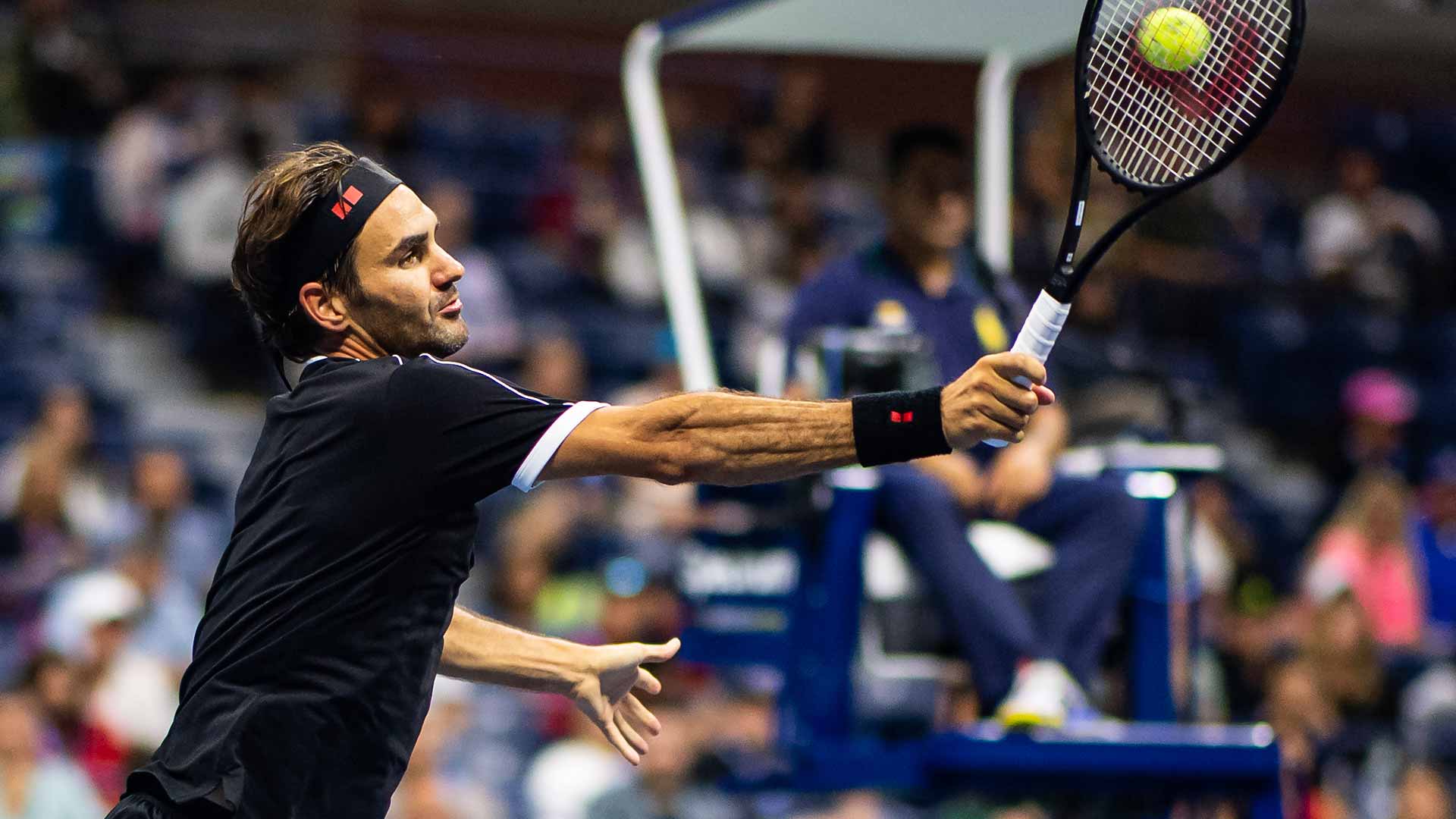 Federer won the toss and elected to serve. The Swiss kicked off with a hold for fifteen for 1-0. Dimitrov then hit two double faults at 15-15 and 30-30 before going long with a forehand to drop serve.

Roger quickly consolidated to love for 3-0 to get off to the perfect start. The Bulgarian was then immediately down 0-30 but won four consecutive points to get on the board for 1-3. More solid serving from Federer saw him hold for 4-1 despite being pegged to deuce.

Another 15-30 game had Dimitrov under more pressure, but he held from deuce for 2-4. Federer then had his trickiest service game with a big point at 30-30, but he reeled off the next two points for 5-2.

Game eight saw Dimitrov slam down a more comfortable hold, but Federer closed out the set to love in impressive fashion to take it 6-3, landing 74% of first serves and converting his sole break point chance of the set.

Into set two and Grigor kicked off with a confidence-boosting hold to love. The Bulgarian then fashioned 0-30 with some flash groundstrokes and was able to hold his first breakpoint at 30-40. Federer saved it with an ace before holding for 1-1.

A second love hold from Dimitrov moved him up 2-1, and he was beginning to find some success backing Federer up in the rallies. However, Federer stayed strong on serve, throwing in a love hold for 2-2.

In game five, Federer was able to fashion thirty all but Dimitrov held for 3-2. Roger's accuracy on the first serve went off in game six, and he was broken to thirty.

Dimitrov consolidated the break for 5-2 and was scrambling well from the baseline to pressure Federer. However, Roger held firm to fifteen and asked Dimitrov to serve it out.

The 2017 Tour Finals champ quickly slipped down to 15-40 and despite saving the first break point with an ace was broken back when he double-faulted.

Federer was quickly up 30-0 in game ten, but some hesitant play allowed Dimitrov to reel off four straight points to level at one set all.

Set three kicked off with the pair exchanging holds for 1-1. Game three saw Dimitrov hold to love, and Federer's timing was all over the place with shanks galore.

A love hold steadied the ship as Federer levelled at 2-2 and the Swiss finally found some crisp groundstrokes to fashion 0-40. However, he failed to convert as Dimitrov escaped the game to lead 3-2.

Federer needed an immediate response after failing to break, and he held to fifteen for 3-3. A forehand just long from the Bulgarian then gave the Swiss 15-30, and a slick move in behind a second serve to set up a breakpoint at 30-40. Dimitrov then double-faulted to give Federer a break.

A superb backhand down the line kicked off game eight to give Dimitrov 0-15, and that was soon 15-40, but Roger dug in his heels, making deuce then coming up with a sweet half volley on game point to lead 5-3.

Buoyed from consolidating the break, Federer then moved up 15-40 thanks to a ridiculous forehand lob. Dimitrov then netted a backhand, and the Swiss was up two sets to one, landing 64% of first serves, making 76% of returns in play against the first serve and winning eight of eight at the net.

Into set four and some meaningful returns from Dimitrov saw Roger slip down an immediate break. Federer's timing again went off in the return game and Dimitrov consolidate for 2-0.

Federer was then under more pressure, getting pegged to deuce before holding for 1-2. However, he couldn't make any inroads on the return as Dimitrov held to lead 3-1.

A hold to thirty kept the Swiss in touch and in game six, two drop shots helped him create 30-40. A missed forehand return got Dimitrov to deuce and he dug in to hold for 4-2.

Game seven looked like it would be a game to forget for Federer as he slipped to 0-40 but he recovered to make deuce and saved another four break points in a lengthy twelve-minute game that reminded me of one against Murray at the Masters Cup in 2008 to hold for 3-4.

Not perturbed by failing to break in the last game, Dimitrov held to fifteen to put himself one game away from forcing a decider. Roger then held to love for 4-5 to ask Dimitrov if he could serve it out.

At 0-40 it looked as though Federer had the game in the bag, but he played timidly on the breakpoints to allow Dimitrov to make deuce. Two more breakpoints came the five-time Champions way, but he squandered the first by failing to take advantage of a short ball and the second with more tight looking play. Dimitrov then held to force a fifth set.

At the set changeover, Federer left the court and when he returned it was announced the physio had been called. An off-court medical timeout followed.

Upon resumption Roger dropped serve and soon found himself down 4-0, winning just four points to Dimitrov's sixteen. The Swiss did finally get on the board, at 1-4 and 2-5 but Dimitrov was now comfortably in charge, and he served it out efficiently to make the last four. 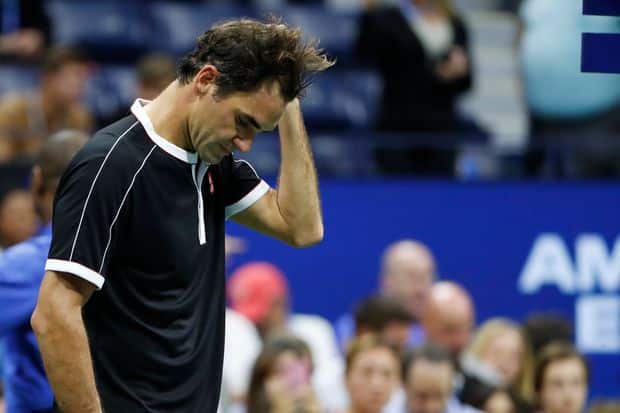 Well, I just needed some treatment on my upper – what is it – back, neck. Just needed to try to loosen it up, crack it and see if it was going to be better. Yeah, but this is Grigor's moment and not my body's moment, so… It's okay. Had a little bit this afternoon. That's it. I was able to play. It's okay. It's how it goes. I tried my best. By far not too bad to give up or anything. Grigor was able to put me away. I fought with what I had. That's it. So it's okay. I thought he was tough off the baseline. He mixed up well, which gave me all sorts of problems with the rhythm. Could never really feel comfortable off the baseline. That's something in the past I've always been able to dominate, I'd say. That was not the case tonight. He did a good job there. Federer on his loss to Dimitrov

Another tough loss at the final Grand Slam of the season here for Federer and yet again the US Open proves an unhappy hunting ground.

Like most of his losses, it wasn't a terrible performance, and he had opportunities to come through but ultimately never had that cutting edge on the night to get over the line.

If you look at how the match panned out, Fed played a decent first set but was gifted the break and most of his chances on the night came from Dimitrov's shaky play on serve rather than his own creativity. Some good moments and sharp points from both guys but the match was never the highest quality over a sustained period.

In fact, Federer's first three breaks of serve were all courtesy of double faults, and it wasn't until game nine of set three when securing a double break that he had to put a ball in play to do so. The fourth set saw Dimitrov offer up six chances for Federer to break back, but the Swiss never had the conviction to his game and rather than jumping over short balls, he played too safe. Had he got back level in set four, he might have been able to squeak it out, but it wasn't to be.

As for Fed's now confirmed back problem, I first got wind of the issue when Darren Cahill picked it up on ESPN in the first set. It wasn't immediately clear there was a big problem, but after the first set, the pace of Federer's play seemed to drop off. Dimitrov was able to get more of a foothold in the rallies and was able to back Federer up on the baseline. From there Fed seemed to go through periods where he was able to strike the ball well, then tighten up, start muscling the ball and shank it galore.

Once that became the pattern of play, it became more about if Dimitrov could play well enough without getting tight or clowning up and he was up to the task. While not at the same level of the top guys, Dimitrov is more than good enough to compete against a fully fit Federer, so any sort of physical issue closes that already small gap, and that's what we saw tonight.

As for Dimitrov, you can only say well played, Fed took to the court, so he was fit to play and after a pretty dreadful season, he's in the last four of a Grand Slam. I don' think he played brilliantly, but he moved speedily and did an excellent job of putting Federer in some awkward spots and is deservedly into the semi-finals.

A devastated Roger Federer said to me: «I have a good idea what the injury is. It’s something that will bother me today, tomorrow and the day after tommorrow. Then it will be okay. That makes it even more disappointing that I didn’t find a way today.» Federer speaking to Simon Graf in Swiss Press after the loss