He'll next face defending champion Novak Djokovic who saw off a spirited Roberto Bautista Agut in four sets in the first semi-final of the day. 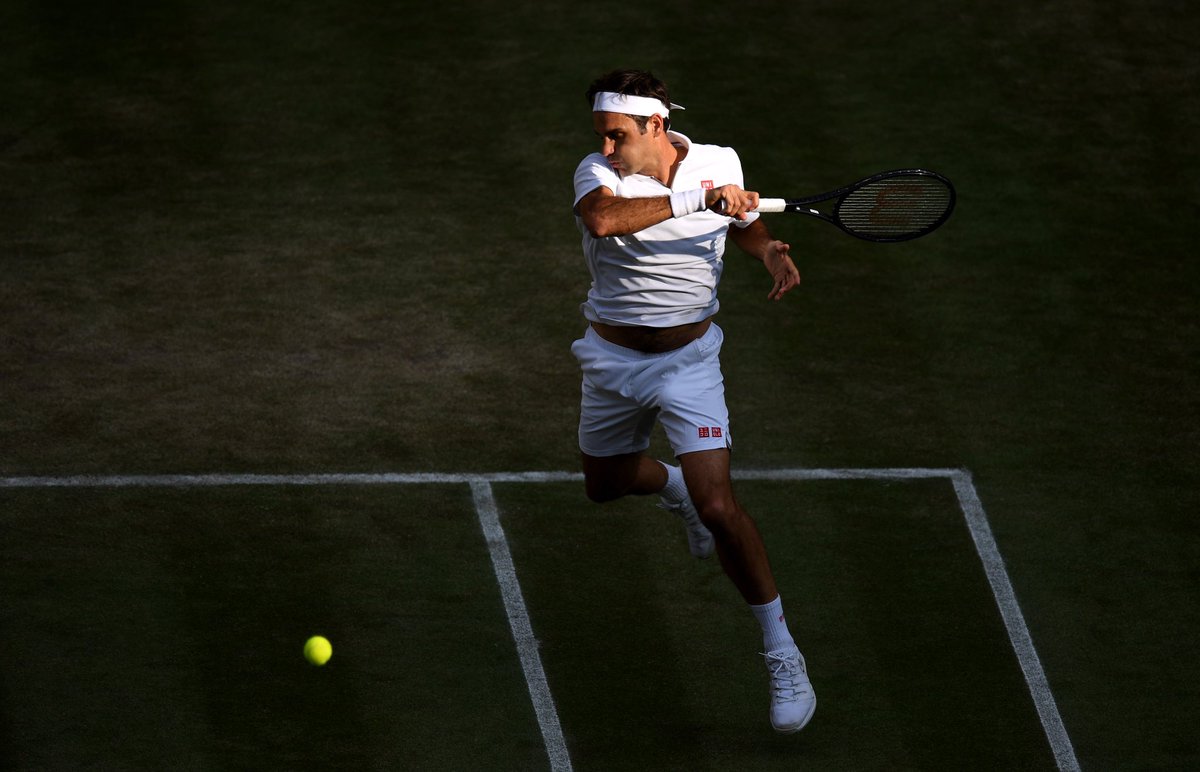 Federer won the toss and elected to serve. Two aces helped the Swiss hold to thirty for 1-0.

Nadal was quickly level with a love hold including an ace of his own before Federer matched him to lead 2-1.

Game four saw Federer make his first meaningful returns but Rafa held to 30 thanks to his 1-2 punch.The pair then exchanged holds and the scoreboard was quickly 3-3.

More slick serving from the RF97 produced another love hold for 4-3 and in game eight Roger had his first break point of the set after some solid returns. A lengthy rally ensued with Nadal catching the back edge of the line twice before Federer netted a backhand which allowed Nadal to escape for 4-4.

Back to back aces from thirty all then put Roger up 5-4 but Nadal showed no signs of nerves as he kept himself in the set with a hold to fifteen.

Another Federer love hold put Federer up 6-5 and Nadal looked set to match him but he was pegged to deuce before finally holding to force a tie break.

Into the tie break and Nadal showed tremendous foot speed and racquet head control to track down a Federer angled volley to get an immediate mini-break.

Roger recovered it but a missed sliced at 2-2 again to give Nadal the mini-break. However, the Swiss was again able to get back on level terms and from there he took charge, ripping a forehand winner off a shortball for 4-3, winning both service points for 6-3 and again delivering a forehand winner to take the first set.

Into set two and Nadal kicked off with a hold to thirty and the Spaniard was able to create his first breakpoint at 30-40 in game two. Roger served it with a serve + forehand combo and had to save another with an acute volley en route to levelling at 1-1.

It was then Roger's turn to have two breakpoints, Nadal saved the first with a forehand back behind off slick Federer return. The second was a netted second serve return that caught Federer by surprise due to a lack of pace and Nadal held.

A couple of missed first serves from Federer saw him slip to 0-30 in game four before a wild forehand gave Nadal 0-40 and he converted to take a 3-1 lead.

A quick hold consolidated the break and Nadal was able to secure the insurance break after Federer's level dropped, he went onto seal the set 6-1. Roger won just 15 points to Nadal's 30 and only came out on top 54% of the time behind his first serve.

With a best of three-set shootout now in play, the pair exchanged holds for 1-1 at the start of set three.

A love hold from Federer moved him 2-1 in front and in game four he moved up a gear, putting more returns in play to create a breakpoint then got the better of a cat and mouse net exchange to take a 3-1 lead.

The Spaniard was quickly up 0-30 and a double fault gave him 15-40. A ridiculous rally at 30-40 saw Roger make deuce and but he soon faced another, only again to come out in top in an extended point to make deuce and then hold for 4-1.

Nadal had managed to secure the double break in set two and it appeared as though Roger would do the same at 15-40 but Rafa hit back to hold for 2-4 and apply some pressure.

The Swiss responded with a hold to fifteen for 5-2 and although Nadal again recovered from 0-30 to hold for 3-5, Roger produced a high-quality service game to take the set 6-3, firing 15 winners to just 2 unforced errors.

Set four started with an exchange of holds for 1-1 but in game three Roger made the first breakthrough, setting up two break points with an 86mph inside out forehand winner before converting the second for 2-1.

A love hold consolidated the break for 3-1. Nadal then reeled off a hold to fifteen before creating a half-chance at 15-30. A big inside in forehand made 30-30 and Roger won the next two points to maintain his lead at 4-2.

Rafa was then pegged to thirty all in game seven but held before Roger was again able to keep his advantage for 5-3.

With Nadal serving to stay in the match he was quickly up 40-15 before Roger made deuce. On the deuce point, Roger hit a superb return but then decided to incorrectly challenge even though Nadal wasn't making the next ball. Roger then won the next two points to set up a match point but Nadal saved it with a smart first serve. Another match point came the way of the Swiss but again Nadal saved it and forced Roger to serve it out.

An ace kicked off the all-important game for Roger for 15-0 but a dreadful overhead miss gave Nadal a break back point. Roger somehow saved it after another crazy rally. A slick volley then brought up another match point but again Nadal saved it. An ace gave Roger his fourth match point but Nadal produced a powerful backhand pass to get back to deuce. Roger then fired an inside out forehand winner off a short ball to bring up match point number five and he finally converted when Nadal went long with a backhand. 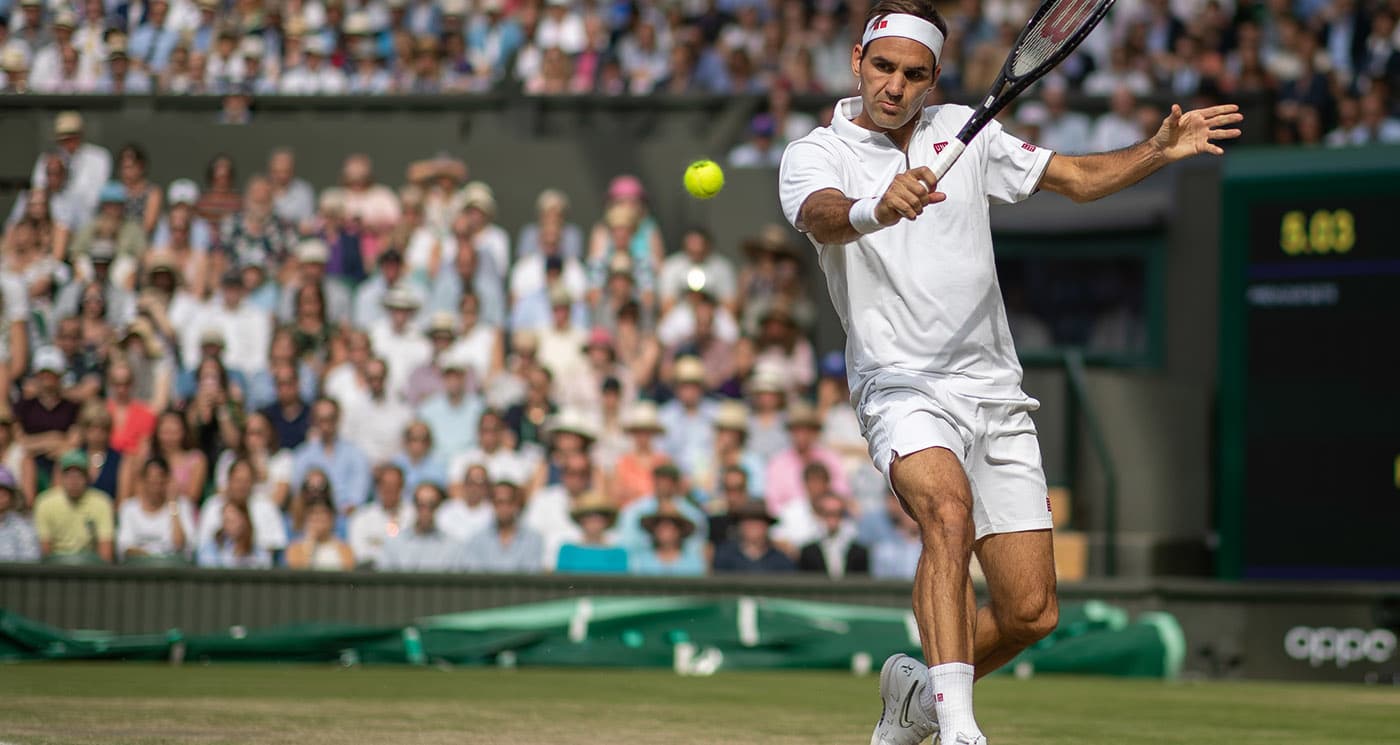 I'm exhausted. It was tough – at the end, Rafa played some unbelievable shots to stay in the match. I had spells where I was serving very well and probably the biggest points in the match went my way. That first set was huge, to get the lead and try to protect it. It was a joy to play. Federer on his win against Nadal

A superb win for Roger here and it was a highly entertaining match to watch. The main takeaway for me was how composed Federer stayed during the match, he never looked rattled and he was able to win the majority of the extended baseline duels which doesn't normally happen against Rafa.

Roger looked better physically than Nadal today, he was more explosive and looked like he was more confident in himself out there. As a result, he was able to pick his moments of when to press and when to stay in the point.

Nadal, on the other hand, didn't look too convincing with his approach, like Roger he's developed to try to keep points short which was never his natural game but he was rarely able to get on the front foot for extended periods. He had his moments with some big serving and those typical Nadal swashbuckling points but they were always when he was down in the score and that caught up to him over 4 sets.

The other key was obviously the return and Roger did a stellar job, winning 35% of return points to Nadal's 30% and he really connected with some aggressive backhands which were clearly the order of the day.

Anyway, that's one of my favourite matches of the year for obvious reasons, Fedal on grass 11 years on from the famed final, full crowd and some classic tennis. Tiring to watch but you wouldn't want it any other way. Allez!

Novak was supreme again. He’s the defending champion and he’s showed why this week. He’s been rock-solid from start to finish so far. I hope I can push him to the brink and hopefully beat him but it’s going to be very difficult. He’s not No 1 just by chance. Federer on Djokovic

Next up is Djokovic who defeated Roberto Bautista Agut in four sets in the first semi-final. I watched a good chunk of it and both guys played well but ultimately Agut doesn't have enough firepower to take out Nole.

The Spaniard will always run Djokovic close because he loves rhythm and Djokovic doesn't really possess that variety or mix up game to disrupt it, but he's just so rock solid off both wings that even the guys that never miss like Agut, end up missing in the end!

As for the final, it should be interesting, Djokovic goes in as the favourite given he's defending champion, has beaten Roger in two Wimbledon finals, is the younger / fitter guy and had the slightly easier semi-final but it could be a close one.

The key for Roger is to recover well after today and then come out firing on Sunday and throw his full repertoire of shots into the mixer to try take Djokovic out of his comfort zone.

I reckon Roger will remember the masterclass against in Murray in 2015 then the flat final so he knows that there's still work to do and a huge obstacle ahead of him come Sunday. Hopp Suisse!

What did you guys think of Fedal XL? Predictions against Djokovic? Let me know in the comments.