One of the most important specifications of any tennis racket is its swingweight.

Swingweight is how heavy the racket feels when you swing it, or more technically, it's the measurement of a racket's resistance to being rotated about an axis going through your hand.

While swing weight is not something players at the recreational level think about or are interested in measuring, it is a number you need to know if you are reviewing tennis rackets, customising rackets, or playing at a higher level.

So how do you go about measuring it? Let's take a look. 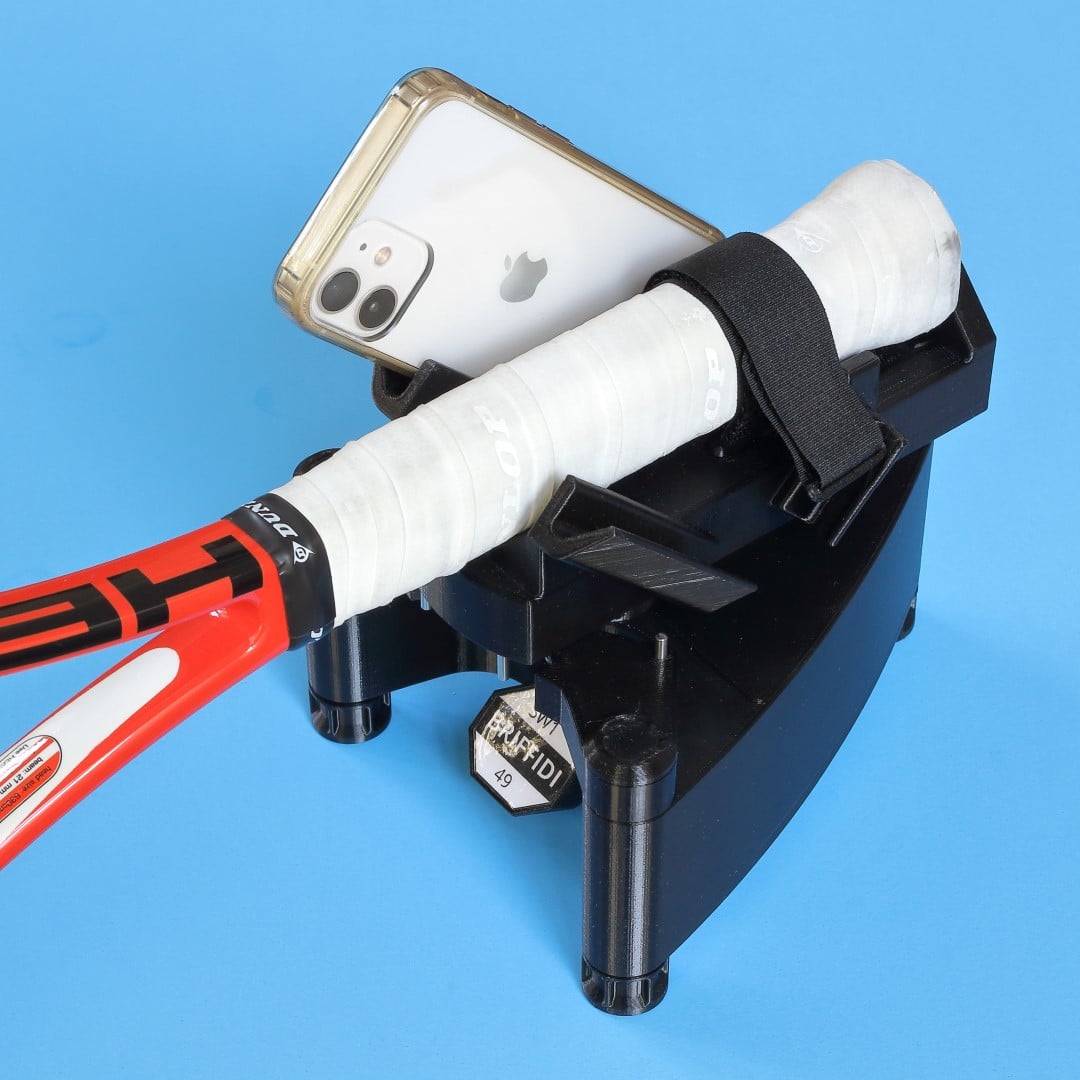 Historically, the two common ways of measuring a racket's swing weight were using a dedicated racket swing weight machine like the Head 3 in 1 machine or Dunlop (Accuswing) Swingweight Machine.

Or, to hang the tennis racket on its top string from some hooks, swing it around 10 degrees and film it on your smartphone camera.

You then took the exact time for 20 swings, using software to capture it frame by frame to get to the nearest millisecond, and then worked out the swing weight with a formula that considers the racket's length from where it hangs and its balance.

That all changed when the Briffidi SW1 came along. The SW1 is a relatively new invention that allows you to quickly and accurately capture your racket's swing weight using the gyroscope sensor of your smartphone.

You can see it in action below:

Why I Bought the Briffidi SW1

I playtest several tennis rackets yearly, and to gauge them accurately, I need to know the strung swing weight specs. This helps me judge quality control, how a racket plays and who it would suit.

Previously I've relied on using a 3-in-1 machine that I don't own or the DIY method, which, while quite fun to do for the first time, ends up being laborious and has inaccuracies if you don't take into account frames per second of video or miss a frame.

I stumbled on the Briffidi SW1 via the Tennis Warehouse forums and was immediately interested. I like innovative products such as this, and the only reason I didn't pull the trigger at first was that it needs an iPhone, which I don't have.

However, after seeing Tennis Spin test it out in his video, I picked up a refurbed iPhone SE 2020 from eBay and ordered the SW1.

My Briffidi SW1 was delivered via UPS and was well packaged. It comes with the main unit, a calibration rod made of PVC pipe, a weight to affix on the end of the rod, and a quick start guide telling you what is in the box and where to find further setup instructions.

Delivery took around one week after ordering, but depending on the backlog and location, it may differ for you. I paid $74.89 for delivery on top of the $249.99 unit price.

I am not a 3D printing expert to know how quality differs, but once the BBs are inside, the unit feels rock solid, and the plastic has a nice feel.

Disassembling the unit to pour in the ball bearings was straightforward; from there, the task was to level and calibrate the device using the calibration rod.

Again this was straightforward as there is a follow-along guide:

All in setup took me about 15 minutes, and I was soon measuring the swing weight of several rackets and comparing them to my 3-in-1 readings. Simple.

Using the Briffidi SW1 is super easy, and you quickly get a feel for the optimum way of releasing the racket to measure accurately.

Fitting the racket into the velcro strap and tightening it is straightforward, and the app is very easy to use when taking a measurement.

Once you have levelled and calibrated, it is set and forget (assuming you don't move it), so there is not much more to it.

However, you might want to calibrate it periodically or test it against a known racket before measuring a new one. Also, adding or removing a case to your iPhone will impact the measurements, so it requires recalibration.

My other tips would be to install it on a solid level surface, and when measuring, don't hold the racket on the spring too tight; hold it lightly, hit measure, and then release. Also, ensure the racket is mounted level and try to be consistent with the release method.

Despite the higher price, they don't have any advantages. Yes, they look slightly more professional from a customer-facing perspective if you own a tennis shop, but they aren't more accurate, which is all that matters.

If you combine the SW1 with a balance board and some accurate weighing scales, you have a near identical setup that gets you every single measurement for a racket you'll ever need.

How Accurate is the Briffidi SW1? 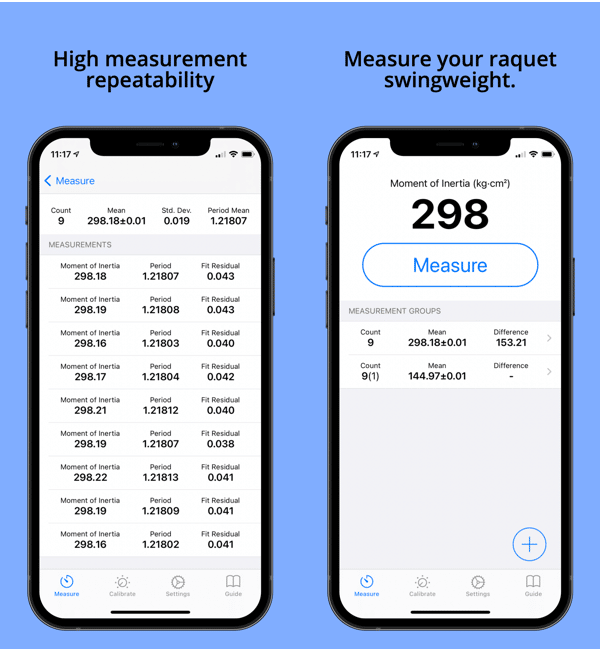 When people hear the words 3D printed, iPhone gyroscope and BBs, the assumption seems to be that the more expensive machines have to be more accurate. Because why else are they four times the price?

However, they're not. They're only equal, at best. Check the app screenshots above; it shows each group's mean over X amount of measurements and the standard deviation.

I have calibrated my machine three times now, and the SW1 reads the values of the calibration rod and weight within 0.05 kgcm^2 every time.

The owner has also done a 1g accuracy test which you can watch below.

When you eliminate as many external factors as possible such as air currents, unstable surfaces, temperature consistency and consistency of racket release, I do not believe there is a more accurate way of measuring racket swing weight on the market.

Plus, there is no need for higher accuracy; no player can tell the difference between swing weights when you start getting into decimal points.

What are the Benefits of the Briffidi SW1? 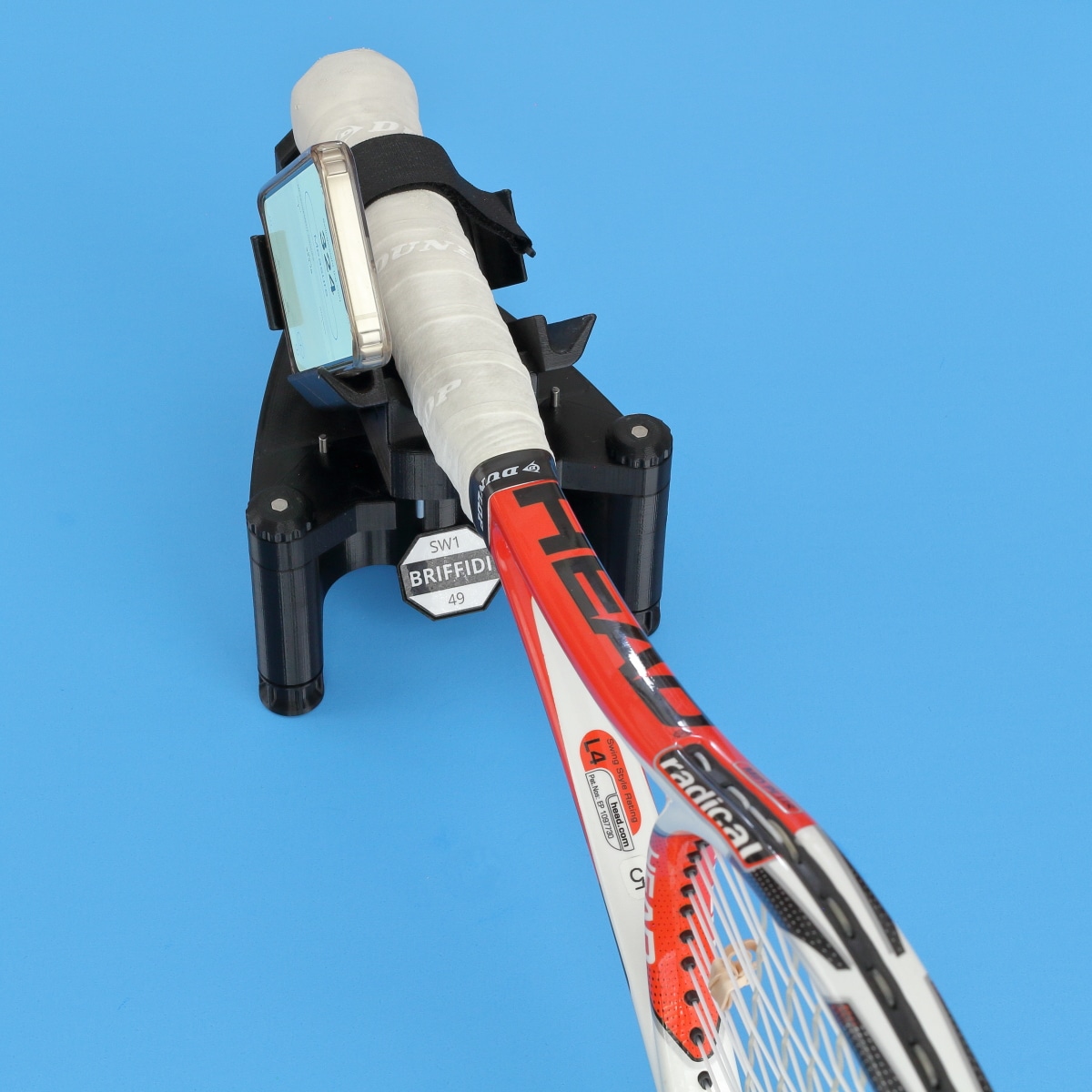 Aside from the pricing, the most significant benefit is that the SW1 is more compact and portable than any comparable device.

I have it sat on a desk, and it takes up very little room compared to a 3-in-1 machine which is more than twice the size and weight.

It's also small enough to travel with, which is another plus. You can lock the swing arm in place with the cradle stop and support it to help protect it.

The device also lets you measure the twistweight of a racket by mounting it horizontally and subtracting it from the swing weight measurement.

Twistweight is a valuable number to know for customising and comparing a racket's stability from one to the other.

While it is not a perfect measurement, as this method is impacted by the squareness of the buttcap, it is close enough to produce a meaningful number.

Any negatives? In terms of usage and accuracy, there are none so far. The only deal breaker for some will be no Android app, but this is currently in the works and should be available soon.

I've also seen some comments in the forums along the lines of “what if the inventor stops supporting the product?” but I think this is asinine.

The product costs $250 and doesn't have a ton of moving parts, things that can go wrong or require much ongoing support. So the risk is minimal.

In terms of what could go wrong, I see the following:

Solution: Buy a used iPhone and keep it on an older iOS version purely for the SW1

Solution: The inventor says he will publish the designs and source code if he abandons the product. Find someone to print a new part.

In reality, it's far harder to get problems fixed on a $2000 machine that is ‘fully supported' by a global conglomerate, so I'd worry about that more than whether the guy with the 3D printer retires and stops producing something that cost less than a tennis racket. 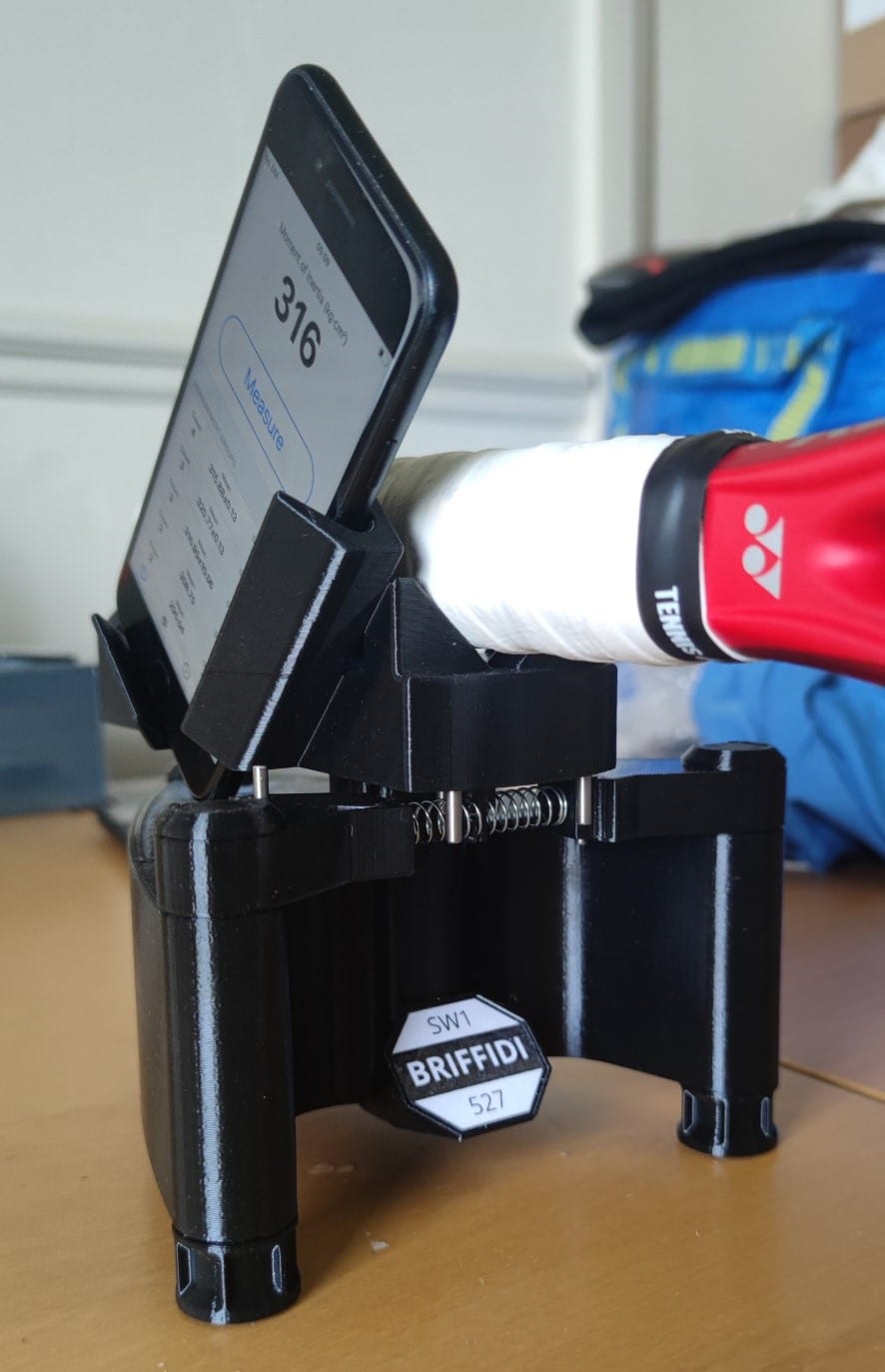 The Briffidi SW1 is a game changer for measuring the swingweight of a tennis racket. It does exactly what it advertises and feels well made.

I applaud the product inventor for coming up with the idea, bringing it to life with a 3D printer and then getting it all working flawlessly with the smartphone's gyroscope.

Should you get one? If you customise rackets and are currently using the DIY method using a timer for 20 swings or the SwingTool app, then absolutely. It is far more straightforward, less tedious and more accurate.

All Briffidi need to do now is come up with a device to measure racket stiffness that mirrors RA, produce a cool balance board and brand up some accurate weighing scales, and they have the racket diagnostic market nailed down!

What do you think of the Briffid SW1? Any questions about the device? Let me know in the comments.

A super accurate way to measure the swing weight of a racket without needing to spend thousands of $$$ on a full-blown diagnostic machine.