Tennis is a sport enjoyed by all ages, and the beauty of the game is that there's always something to improve on no matter what your level or age bracket. The dynamic range of movement required helps your joints work through a range of motions, and covering the court is also a good form of cardio so as a form of exercise when you're over 50 it's ideal.

Local tennis clubs offer senior leagues so you can play with people of a similar age and ability and I've played against players who are well into their 70's who still hit multiple times a week.

However, not all racquets suit the senior game, and that heavy stick you have been using since your twenties might be negatively impacting your game. But what type of racquet is best for an older player? Are there any specific models designed for seniors? Or can they use any racquet?

Recently I received the following question via email asking just that and I've decided to republish it here along with my answer.

I have just read your article about choosing a tennis racquet. I would just love your advice, please.

I want to buy a new racquet for my 76-year-old husband.

He only started playing tennis when he gave up cricket, 45ish but just loves his tennis, plays doubles on average, three times a week For the last few years he has been playing with a Wilson Hyper Hammer 7.3, given to me 17 years ago, and occasionally with a Head Liquid Metal Radical, sweet style rating L4, if that means anything to you.

He's 6'2″ is fit and slimmish, had a hip replacement 18 months ago but that is now no problem. He does complain about his shoulders a bit – too much bowling or golf – but essentially he is strong and active and I see no reason why he shouldn't have five or even ten more years of tennis in him.

So I'd love to give him a racquet that would be fun for him and perhaps also give him an edge through newer technology/design. Any advice or suggestions?

Contents hide
1 The Problem With Trying To Find a Racquet Suited To The Senior Game
2 What To Avoid and What To Look For in a Racquet?
3 Consider The Type of Tennis You Are Playing
4 What Specification Should An Older Player Go For?
5 Swingweight Makes a Big Difference
6 Try To Demo If You Can
7 Shoulder and Arm Friendly Racquets
8 Strings Change Playability A Lot
9 Recommended Racquets 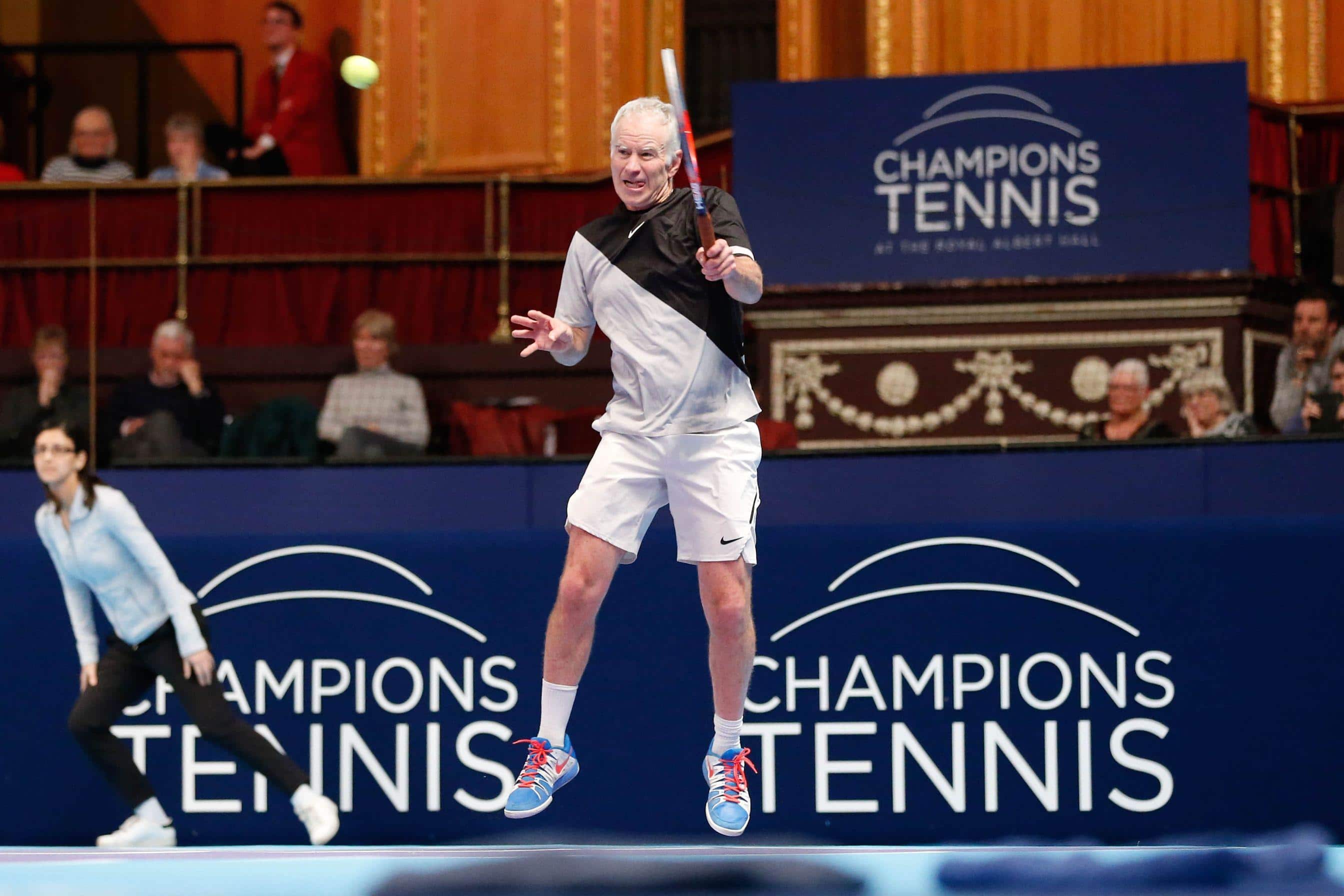 The problem most older players run into when trying to find a racquet is that there are no manufacturers out there who are designing or marketing racquets purely for older players.

So without having the luxury of being able to pick from a select bunch of frames designed for the senior player, you're forced to either learn more about the physics involved with a racquet or just take a punt on a frame you like the look of and hope for the best.

If that sounds like you, then below are some tips on what sort of racquets you should be looking for.

What To Avoid and What To Look For in a Racquet? 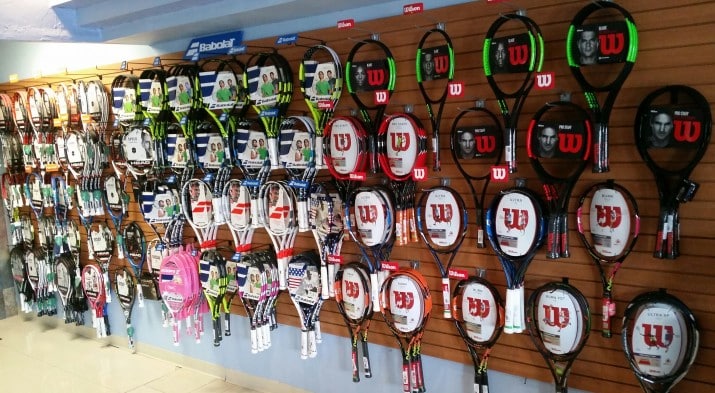 For an older player, I'd recommend staying away from racquets that either fall into the very heavy or ultra-lightweight category. For too light, for a male that would be anything under 280g unstrung and for a female 270g. For too heavy, anything above 350g for a male or 340g for a female.

The general rules I use when it comes to racquets are as follows:

I know a lot of male players only use heavier sticks because that's all they're used to and it's a real man's racquet. So my limit of 350g will seem far too low to a lot of people. But strangely they don't look as enamoured with their 14 oz beast of a frame when players with lighter racquets are blowing them off the court 😆

With those things in mind, the goal is to find the heaviest racquet you can handle properly, for the type of tennis you play and for the duration you are on the court.

How do you know a racquet is too heavy? If in match play, when you are on the run and are consistently late on the ball then your racquet is probably too heavy or has too high a swing weight.

Or if you feel tired after swinging the racquet during a hitting session, or after serving for a couple of sets – it's too heavy.

Another sign a racquet is too light is when it causes elbow or shoulder issues due to being too easy to swing. A racquet can become almost too playable and your technique will suffer.

Consider The Type of Tennis You Are Playing

If you're playing singles against younger players that like to hit the cover off the ball, then using a lighter racquet that’s designed for manoeuvrability and easy swings—not stability will cause you to struggle and get overpowered.

For recreational doubles, you can usually get away with a slightly lighter, larger head size, ‘power' orientated racquet. They lose stability but because the doubles game isn't really about power, the added manoeuvrability and swing speed works well up at the net.

What Specification Should An Older Player Go For?

I recommend finding a racquet that falls into the following specification:

The reason I recommend headlight is because they're more forgiving on the arm than head heavy racquets. Headlight has more weight in the handle and therefore absorbs more shock.

With headlight, you do have to work a harder to put pace on the ball. But that is a worthwhile trade-off for injury prevention. 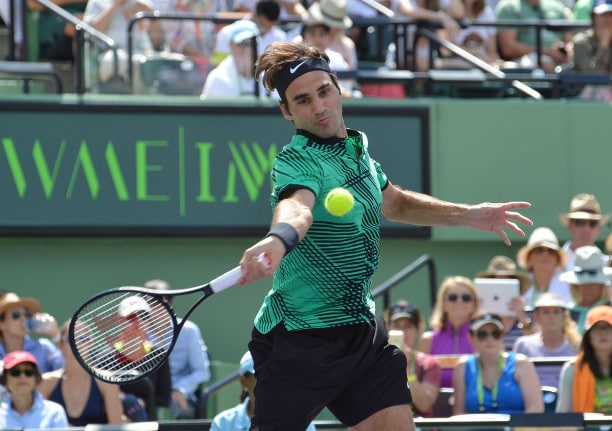 So far I've only talked about the static weight, but another thing to consider is the swing weight. You might find a racquet that is heavier than I recommend, but due to its headlight properties, it can be easier to swing than a lighter frame that is head heavy.  That's why you should always try to demo a racquet before you part with your cash.

Try To Demo If You Can 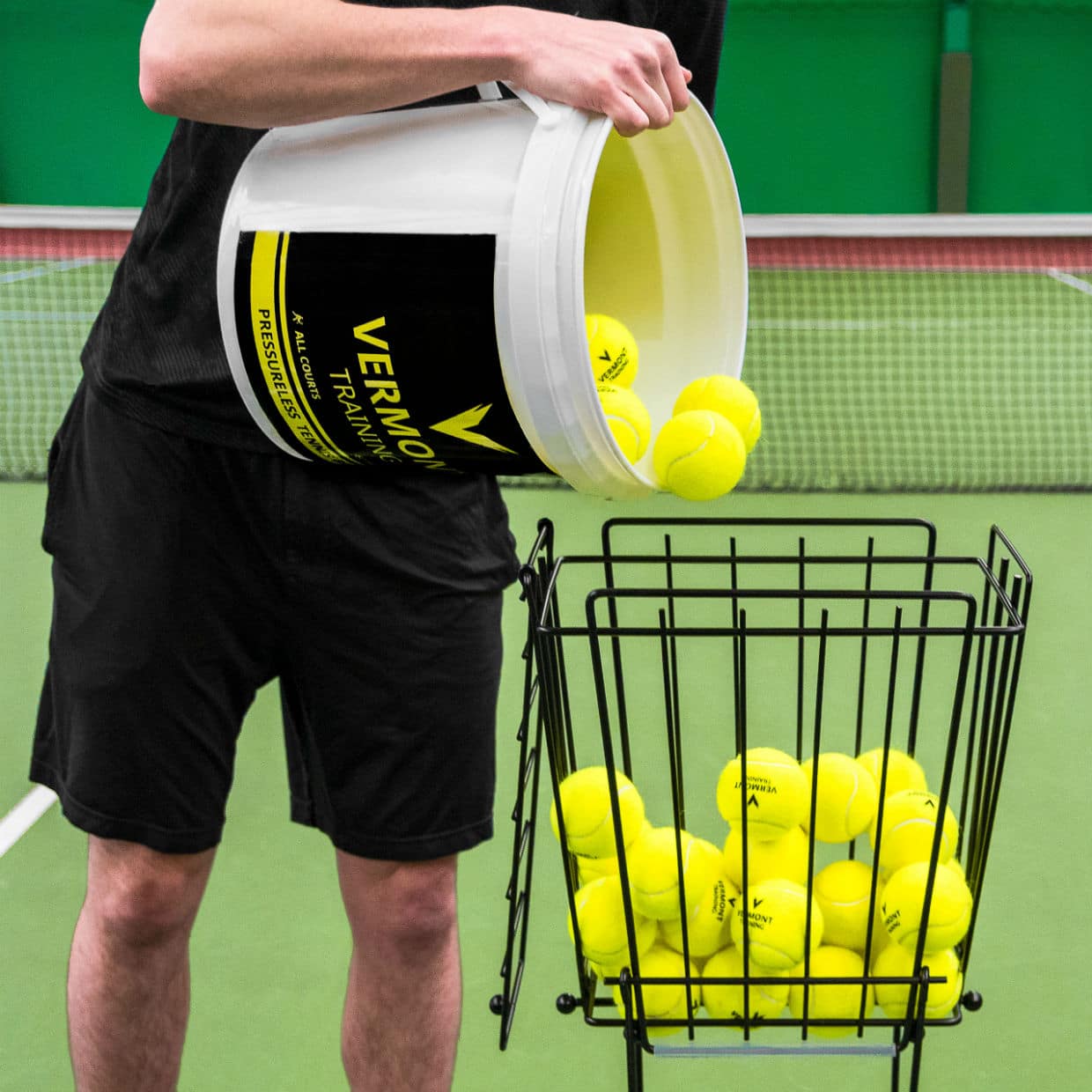 While this post will give you some idea of what to look for, ultimately a player does need to experiment and find out what works for them the best, not just go off what  I or somebody else says.

Ideally, you should always demo a racquet before buying one. If you want me to recommend some demo programs for your location then drop me a comment below or contact me and I can point you in the right direction. 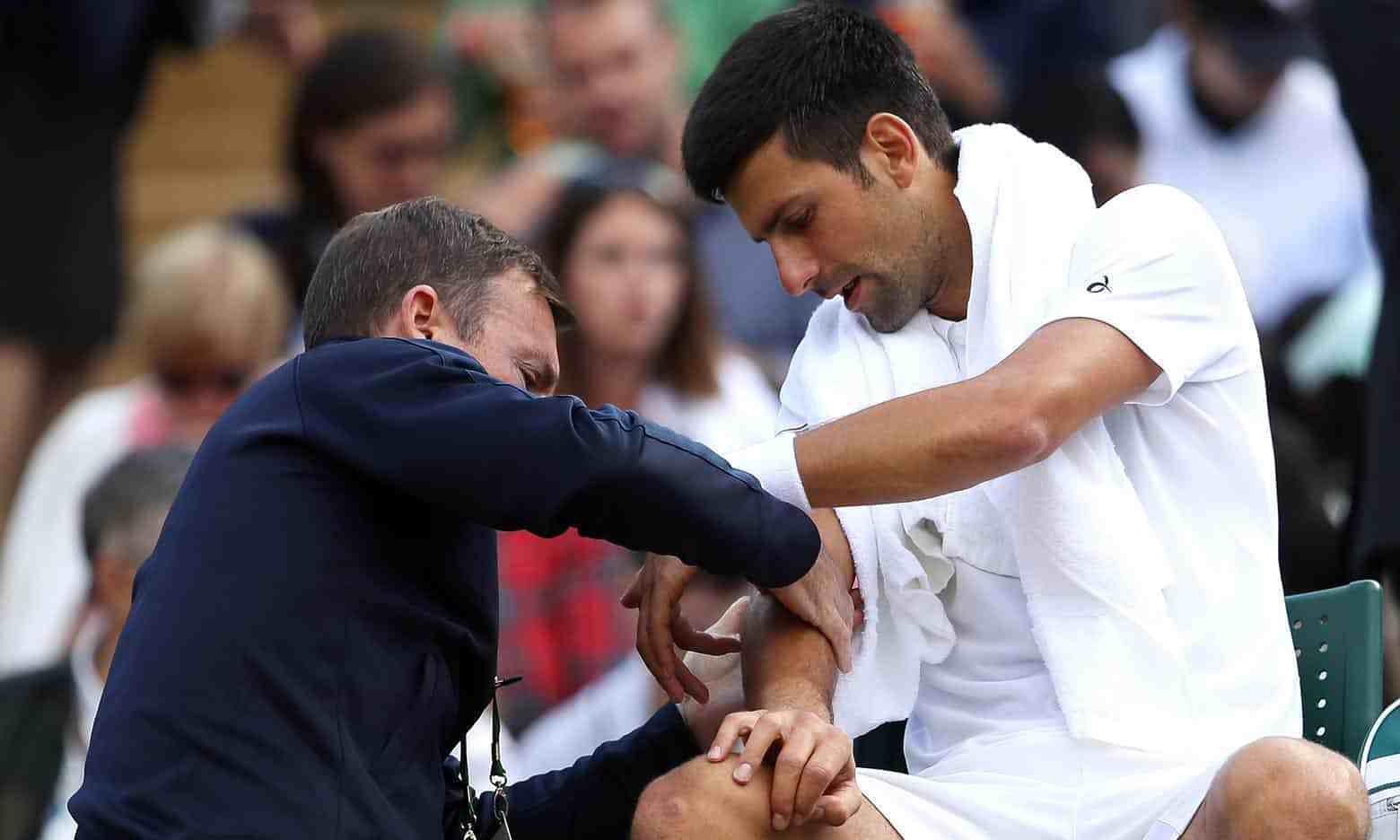 In the question I received via email, shoulder pain was mentioned. The general consensus here is that lighter racquets pass more of the shock of impact on to the user, which isn't good for the shoulder or elbow. Whereas a heavier and more flexible frame does more to absorb the shock.

If you have a slow swing and think lighter is the way to go, it’s worth taking into account that a light racquet might be too easy to handle and cause arm problems.

There is, of course, a point where heavy becomes “too heavy” so like I mentioned goal is to find the heaviest racquet you can handle properly, for the type of tennis you play and for the duration of your hit.

Needless to say, your personal experience may be the opposite, but in general, a heavier frame is easier on the arm. 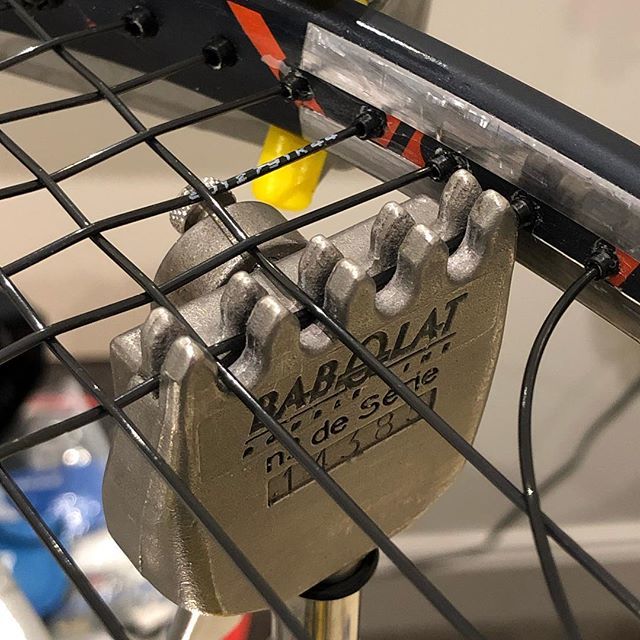 A huge factor in playability and arm friendliness is the type of string you use. If you're a senior player with more classic type strokes looking to preserve your arm, then I would avoid any string made from polyester.

Instead, a softer multifilament string would be the way to go. Natural gut is the best choice and although it's expensive, it does hold it's tension better than any other type of string and will last a long time when looked after.

The other choice I would recommend would be Ashaway MonoGut ZX. But again, if you have the chance, then play around with different strings and tensions. 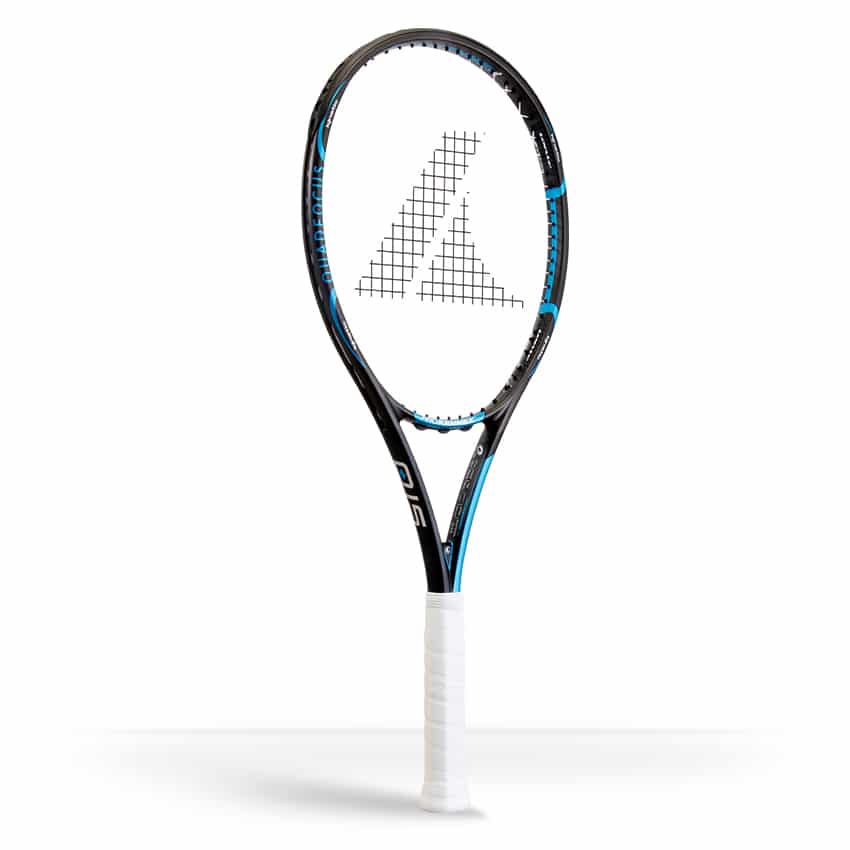 So what racquet is the best for an older player? Can I recommend any specific frames? Not without knowing more specifics about your game and your current racquet, but I can point you in the direction of some brands that are highly regarded and ones I've seen a lot of older players using.

The problem with recommending specific frames as cure-alls is that no two players are alike. To give any racquet the ‘best' title is somewhat misleading as what works for one player might not work for someone else.

A classic example of this was at my tennis club where one player swore by a Prince racquet that had alleviated his tennis elbow. Another player was having similar problems with elbow pain and went out and bought the same racquet.

What happened? Well, you can probably guess, it made his elbow worse. Most recommendations are made on purely anecdotal evidence. You'll find some older players that swear by certain frames like the Babolat Pure Drive which has a notorious reputation amongst players for causing shoulder pain, yet for others, it's made their game pain free!

So what brand and frames should you be looking at? My first recommendation is to take a look at frames in the ProKennex range of racquets. 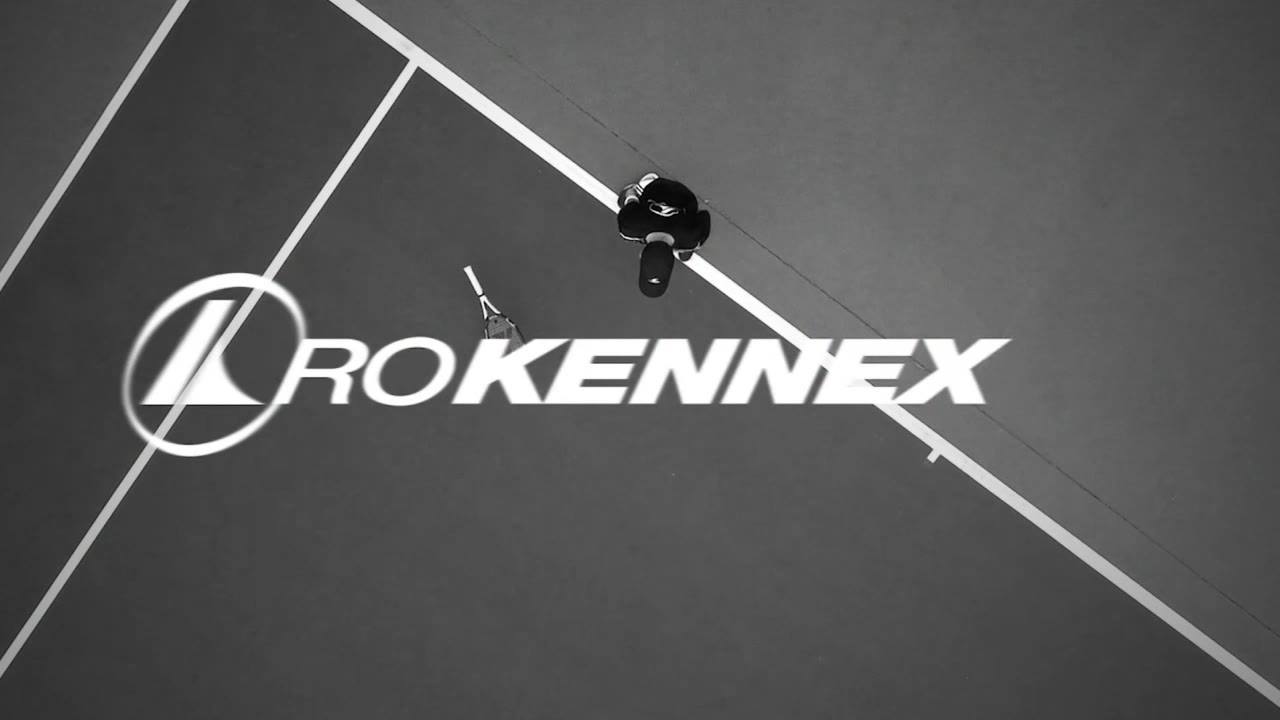 ProKennex are not massively well known on the ATP or WTA Tours with Andreas Seppi one of their only sponsored players. But they are highly regarded for producing some of the most comfortable and forgiving frames on the market.

I've hit with the ProKennex Ki Q+ 5 Pro and it's one that is very popular with older players and if you read through some of the reviews on Tennis Warehouse it's used extensively by a lot of senior players. 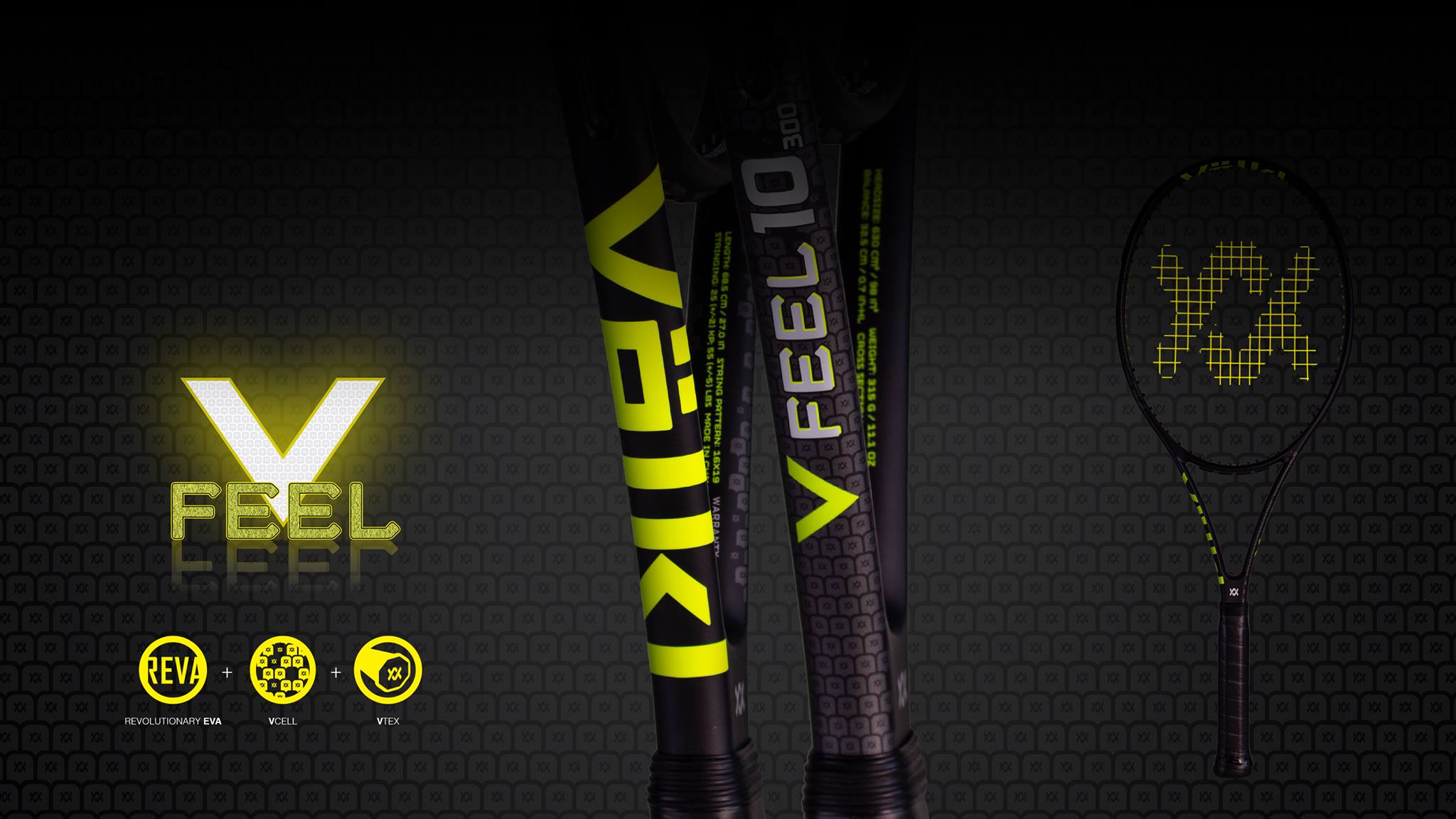 Another brand with a solid reputation in this area is the German brand, Volkl. Volkl is one of the more popular brands for senior players because a lot of their designs are orientated around combatting tennis elbow.

The V Sense range is one to look into with the Volkl V-Sense 3 proving popular amongst a lot of older doubles players.

In doubles, you rarely face someone who hits a heavy ball and can push you around the court so the blend of power and comfort in the V-Sense lineup works well for a lot of players.

The final recommendation isn't a brand, but a specific frame, the Head Radical Oversize.  It packs a 107 sq. in and comes in at 320g but has a manageable swing weight and has a low-ish stiffness rating of 64.

The final thing to remember is that everybody reacts differently to equipment so what feels terrible to some could feel quite comfortable to others. So like I have mentioned several times, do demo racquets and play around with different configurations to see what works.

If you are a senior who is a step slower and feel like you need more power or something arm friendly etc, tell me what racquet you are using, and what you want to change in the comments below and I will let you know if I can come up with any frame suggestions.