Ask someone to name a tennis racket manufacturer; the most common responses you'll receive are Wilson, Head or Babolat.

They are the ‘Big 3' of the racket world; the best players on tour use them, they have the biggest marketing spends and have been around for many years, which is why they are so well known.

One name you won't hear too often outside of mainland Europe is Artengo. When I tested one of their rackets in the UK, several people asked me who they were as they'd never seen them before.

This lesser-known tennis racket brand is owned by Decathlon, a French sporting goods retailer with over 1,697 stores in 60 countries.

Typically, when you think of most large retailers with their own branded tennis gear, you think of cheap aluminium rackets and kids' play sets that come with some foam balls and a net.

However, Artengo is very much a serious player when it comes to tennis. They have a dedicated racket sports division, consult with ex-pros and invest plenty of $$$ in product design and testing.

Along with that, they recently signed Gael Monfils and Daria Kasatkina as their brand ambassadors and have a full complement of tennis equipment, including strings, rackets, balls, bags, and accessories.

I've mentioned Artengo several times in the comments on other posts, and in recent weeks I've finally gotten around to testing out some of their products which were: 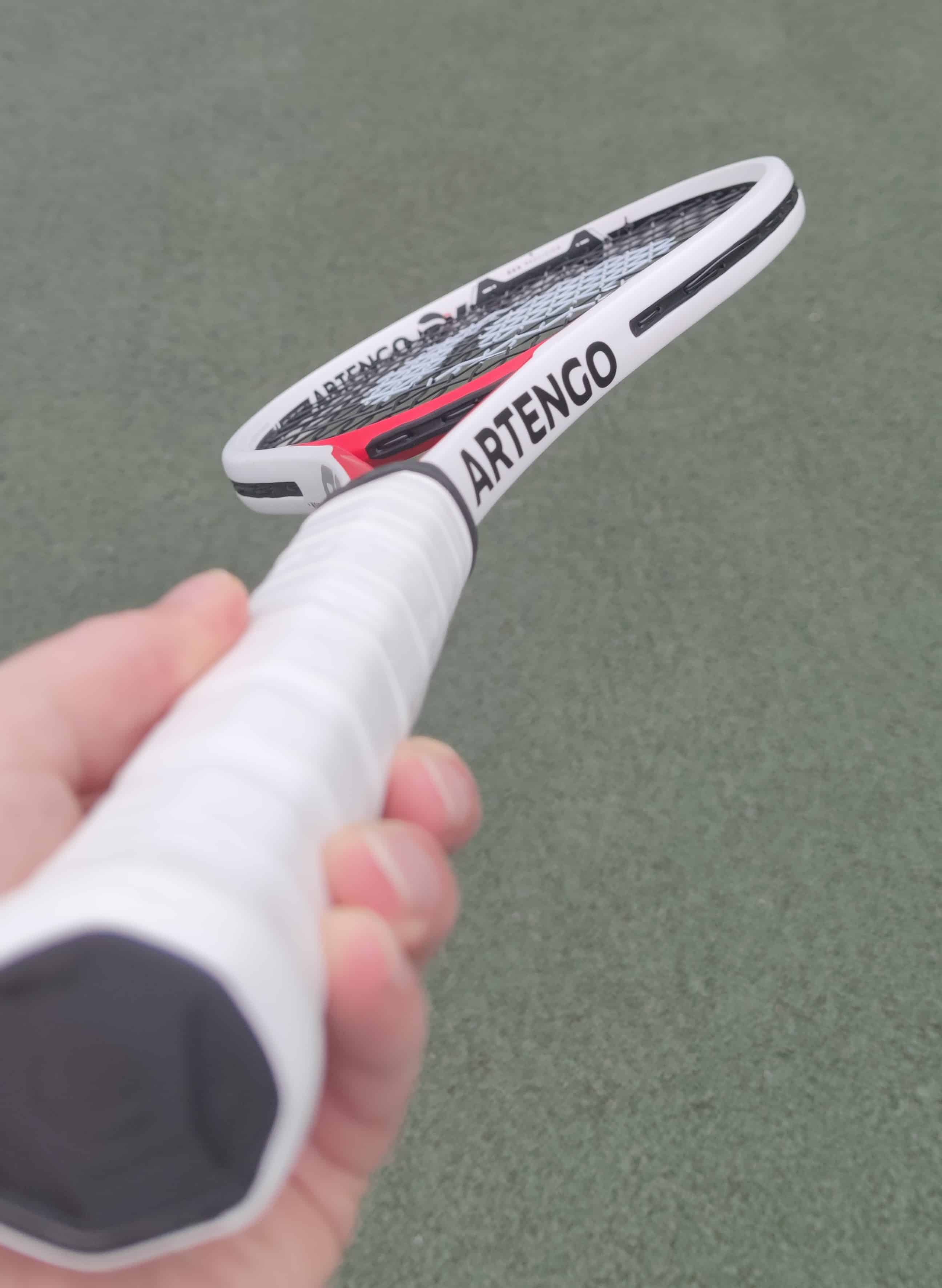 That sounds great, but does it do anything better than other rackets on the market? The answer is no, but the kicker here is that it's half the price of the rackets it is competing with.

For comparison's sake, a Babolat Pure Drive will set you back $249, but there is no way you are getting 2.5 times the racket.

I am hard pressed to see any fundamental differences in quality, maybe the Artengo butt caps look a bit cheap, but the paint and overall feel are comparable to every racket I have tested this year, barring perhaps the Yonex Ezone 98, which feels ultra-premium when you hold it.

Anyway, at this pricing level, Artengo is throwing a bit of a spanner into the works as not only is the TR960 wallet-friendly, it plays great too.

Usually, with rackets at this price point, you get corners cut, but the TR960 is a high modulus carbon frame, and I was very impressed when I hit it. I will do a full review after a few more hours on court.

Via my racket finder tool, I get many people asking me for budget-friendly frames, and until now, I usually point them in the direction of a Head Instinct or trying to find a sale racket.

However, based on the TR960, Artengo is now firmly on my recommend list as I don't think you can find a better price: performance.

Therefore, if you are new to tennis or on a tighter budget, Artengo is defacto the racket brand you should look into. The TR960 also comes prestrung, so it is ready to play immediately.

My racket was slightly over spec at 323.1g strung. I've not yet taken unstrung measurements as the racket came prestrung, so I'll wait until it is time to restring to capture those; I am estimating it is around 305g unstrung.

I would imagine at this price, quality control won't be the highest with Artengo, but the companies who are double the price also have the same issues, so you're not really any worse off; I've weighed sticks over $250 that can be 10g off in static weight. 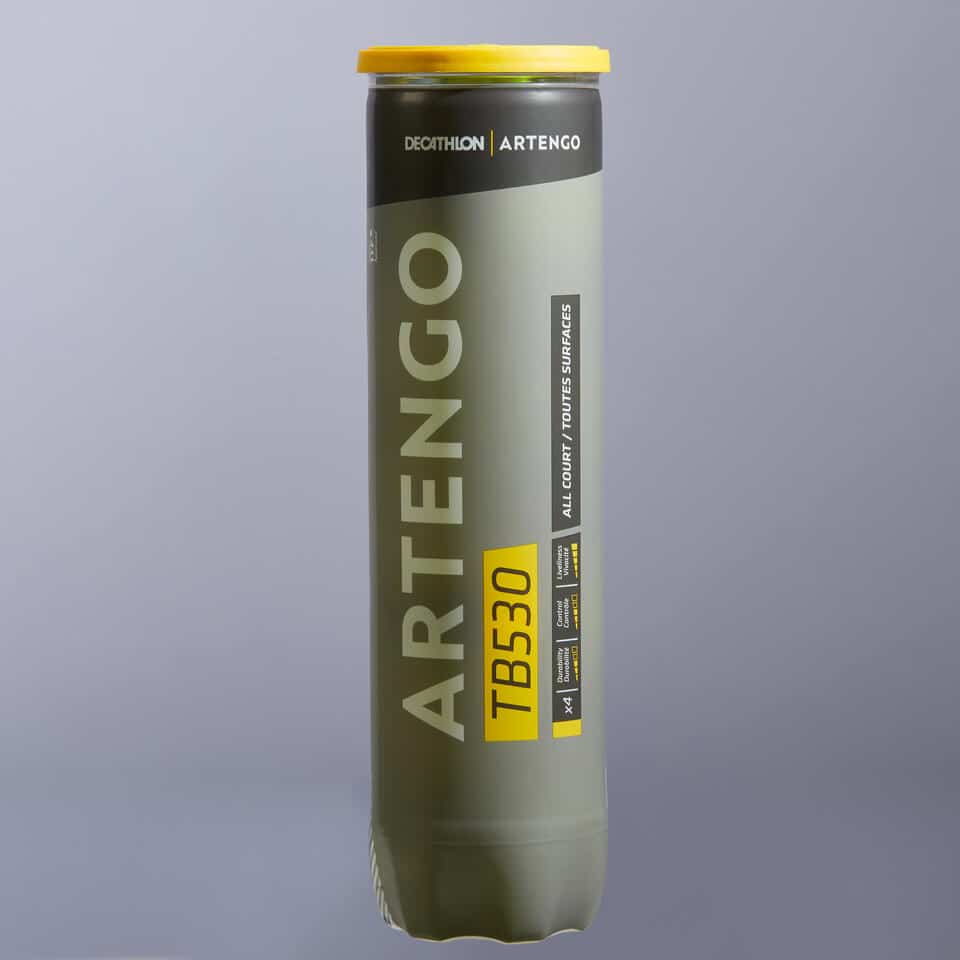 I've written a lengthy post about the best tennis balls, with my favourite probably being the Tecnifibre X-One ball.

However, I will soon be adding Artengo to the list as, just like their rackets, Artengo Tennis Balls are attractively priced and identical in performance.

Of course, this is no surprise as there are only three factories in the world that make tennis balls, so as long as you fuse natural rubber with a high % of natural felt, you will get a decent end product.

The TB530 is their ‘third best' ball in the lineup, with the TB920 and TB930 being their more premium balls, the former being used at the Moselle Open, which is an ATP 250.

I found the TB530 a decent training ball, which is a good buy for the recreational level. For example, they are better than Wilson Ultra Club and Head Championship balls, which they compete with.

However, for more serious play, I'd go with the TB920 ball, which was nicer to play with, more premium and reminded me of Yonex and Tecnifibre balls.

The only thing I am not a massive fan of is the text/font they use on the balls, it has zero impact on play quality, of course, but it is not my favourite aesthetically. What do you think? 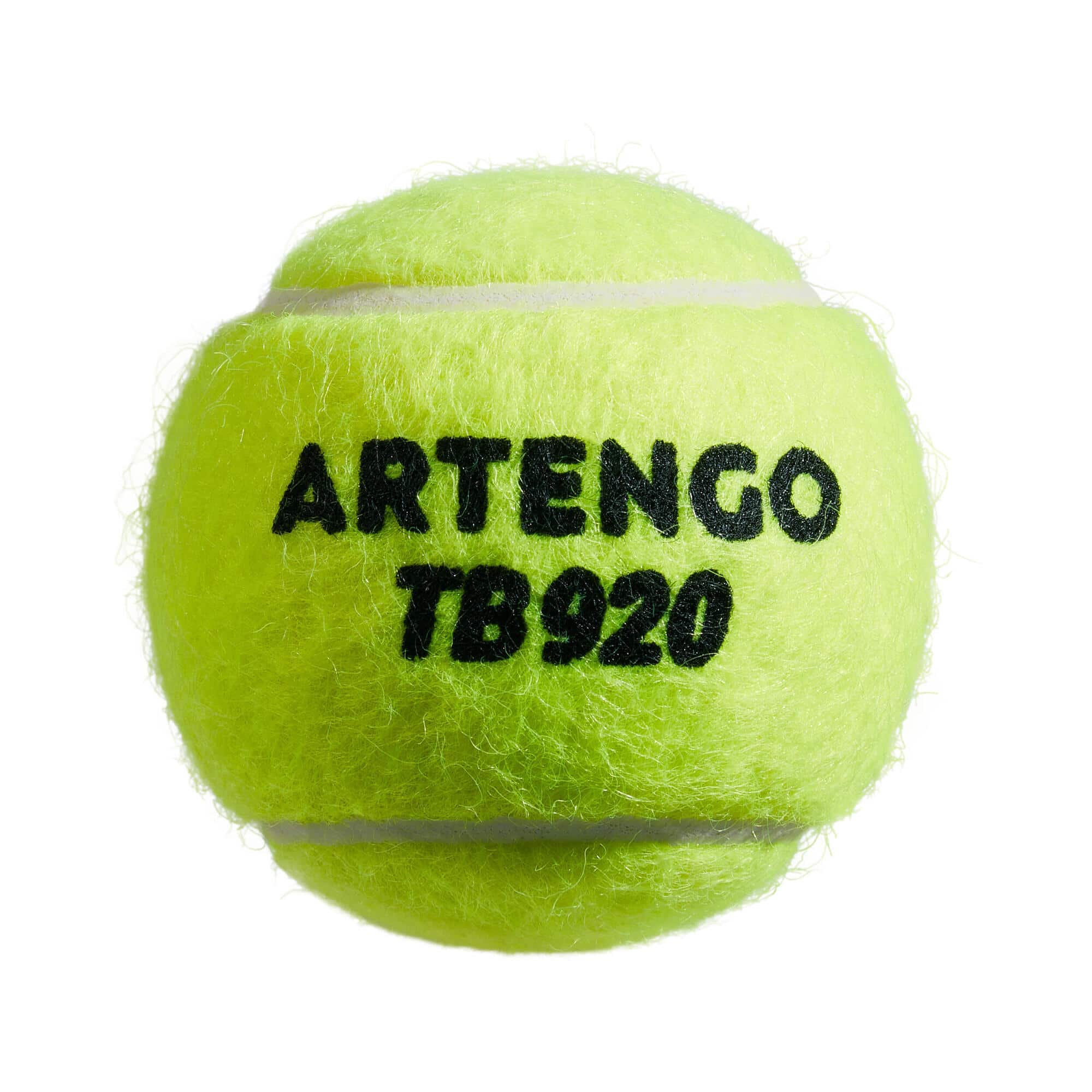 For a more thorough review of the TB920, watch the video below by the Tennis Guy on YouTube, which is a useful channel for gear enthusiasts; check it out: 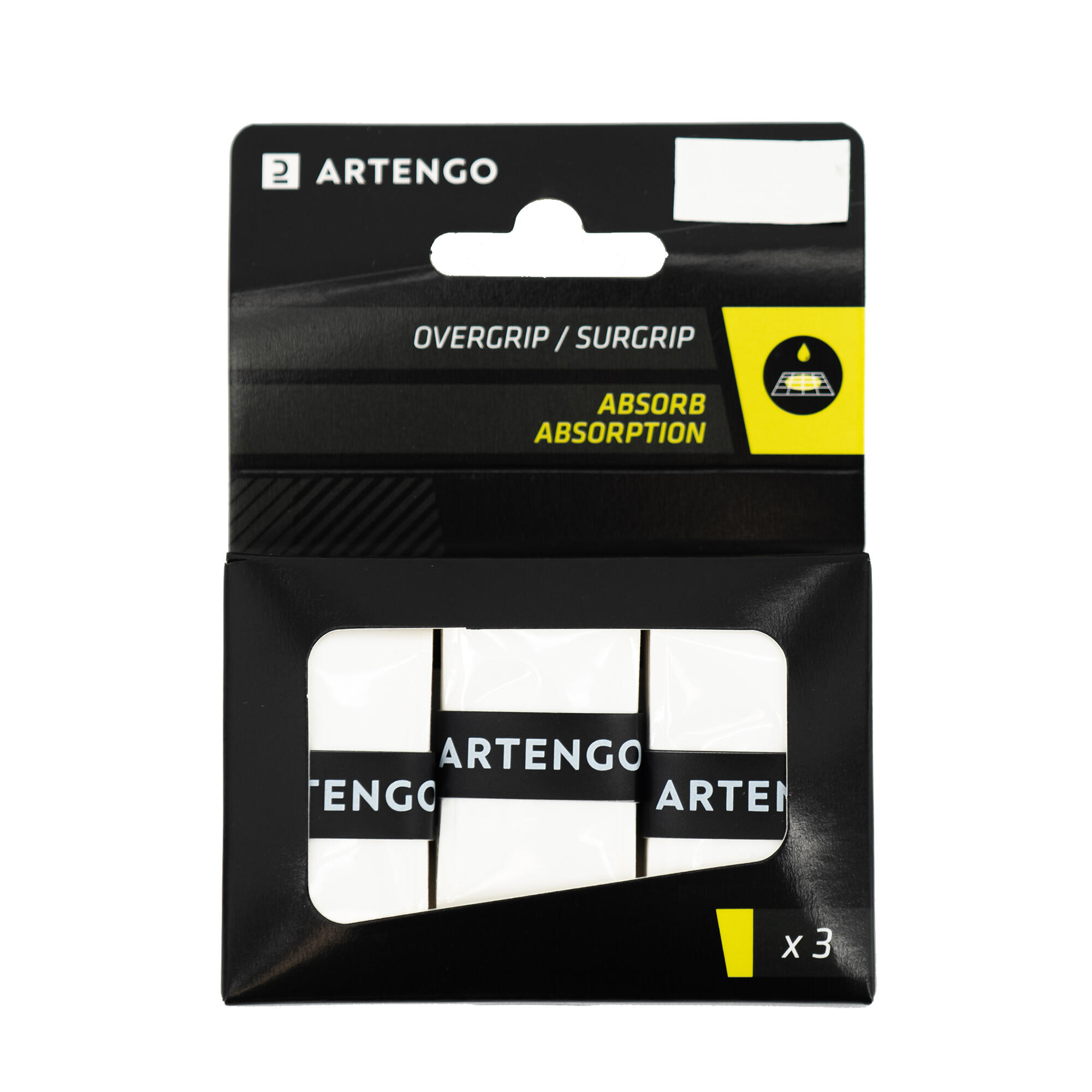 Artengo offers comfort, absorbent and tacky overgrips in packs of three. They are priced at £4.99 ($6.99)

I tested the absorbent grip in white on the TR960 racket and was impressed. If I hadn't seen the packaging before, I'd have thought it was the tacky overgrip as it has a tacky feel.

Like the rackets and balls, it is comparable to my other favourite overgrips on the market, and I liked it because the outer edge has a lip on it, which means you can line up the grip perfectly for a uniform overlap.

The only negative for me would be removing the plastic film on them. On all three, the red tab to help peel it came off first, so I had to faff around trying to separate it with my nail. Possibly a bad batch. 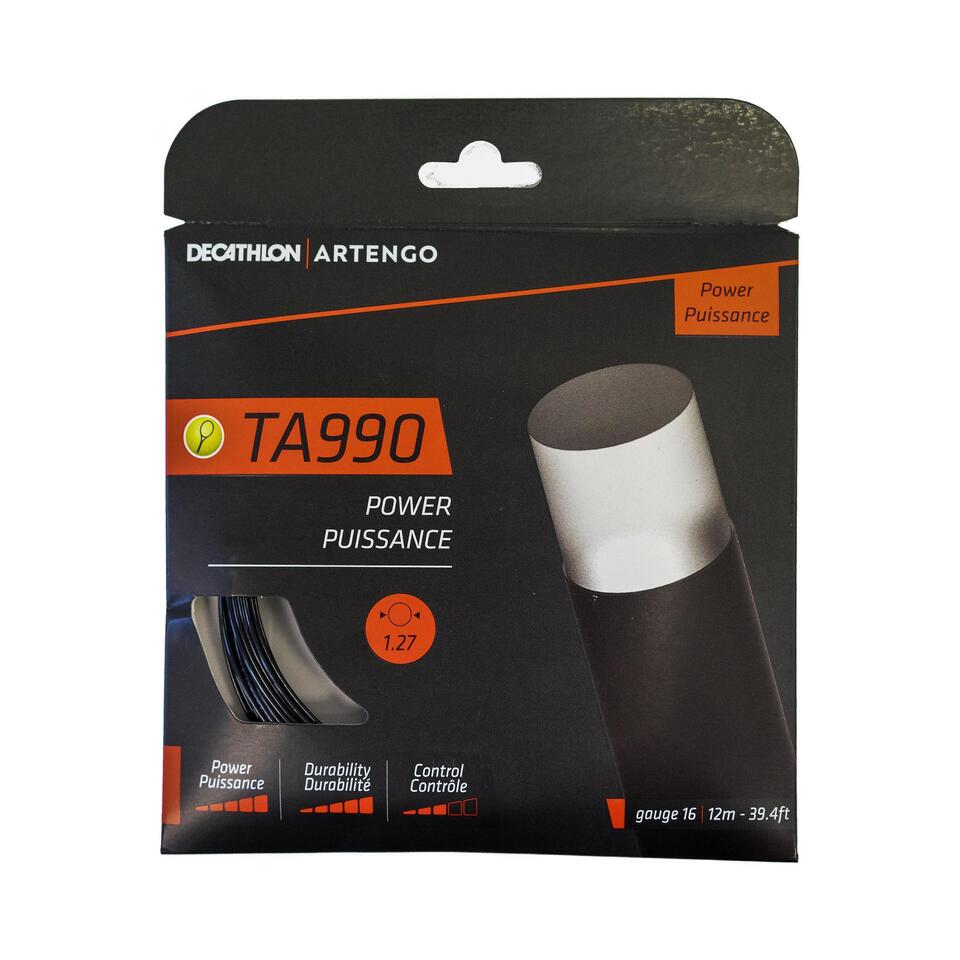 Along with the TR960 racket, I also tried Artengo's TA990 string, a co-polyester monofilament made in Portugal.

On my early testing, it offers excellent comfort, is high-powered for poly and reminds me of Yonex Poly Tour Pro.

TA990 Power is a good choice for a higher standard beginner or intermediate player as at a lower tension in the right frame, TA990 won't cause any arm issues. It provides some free power while giving some decent spin potential and control. 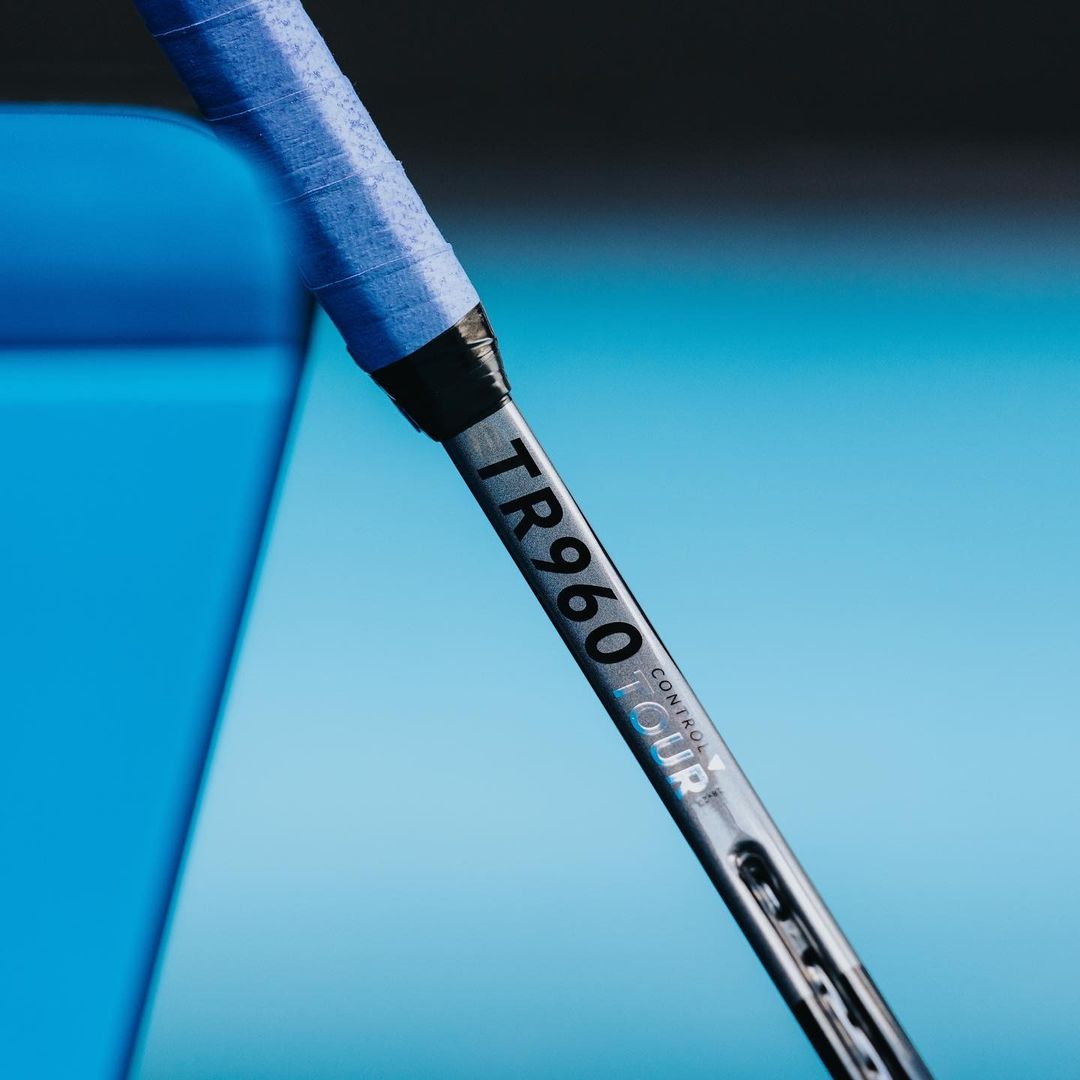 So far, all the Artengo products I've tested have impressed me, especially the rackets, given the price point.

I aim to test some of their other gear once I have cleared my list of products to review, as the bags and shoes also look good.

Hopefully, they don't start handing out huge endorsement money and have to triple their prices before I get around to it. 😁

Have you tried any Artengo products? Got feedback on them? Or questions? Are they already popular (or growing) in your country/area? Let me know in the comments. 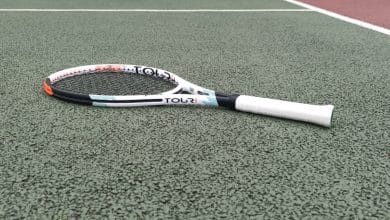