Those of you that read my blog often will know in 2018 I attended Wimbledon to see Federer play Mannarino in the fourth round. I camped for the tickets for the first time since 2013 and whilst not much has changed in terms of the tips I posted here, I thought I'd do a dedicated post to all things camping and queuing. So without further ado here are some things you might want to know if you're planning on joining the queue and camping for Wimbledon tickets in 2020.

Contents hide
1 Why should I queue?
2 How many tickets are available in the queue?
3 Where is the queue located?
4 What items should I bring?
5 How does the queuing system work?
6 What happens on the morning of play?
7 What do I do with my tent and other luggage items?
8 I'm queuing for more than one night, how does this work?
9 I want tickets for Centre Court when should I arrive?
10 How can I pay for the tickets?
11 What are the facilities like?
12 How long can I leave my tent for?
13 What are the food options for the queue?
14 Final Thoughts

Why should I queue?

If you haven't won tickets in the public ballot and don't fancy paying debenture prices then queuing is one of your only options to land Wimbledon tickets be it for the show courts or just a grounds pass. It's also quite fun, assuming the weather is good!

How many tickets are available in the queue?

Where is the queue located?

Smack bang in the middle of Wimbledon Park. If you're coming via the London Underground then get off at Southfields and it's a 10-minute walk up the road. I've marked the entrance on the map below:

What items should I bring? 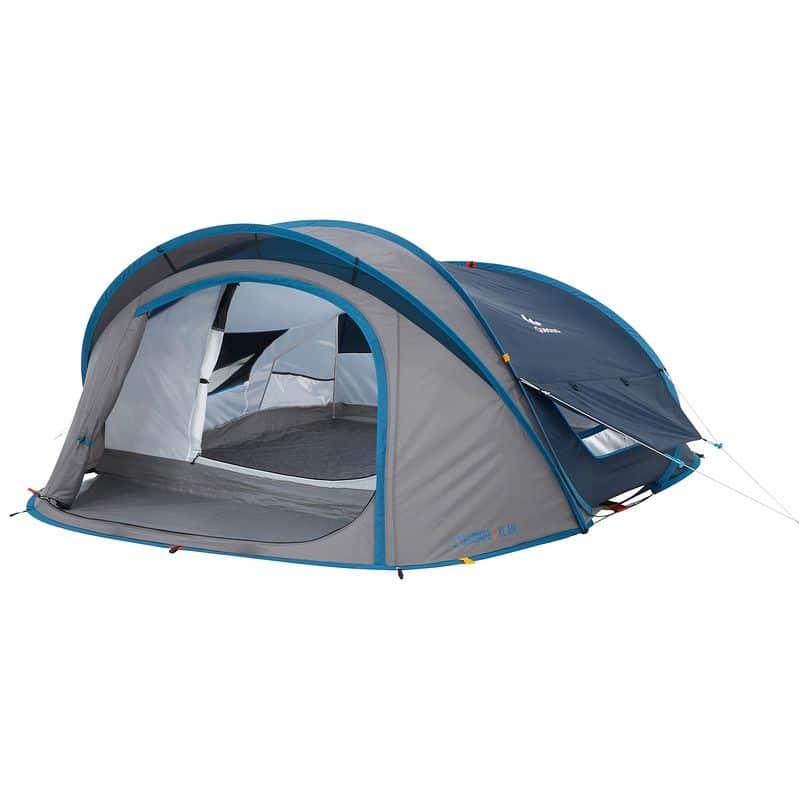 Queuing for Wimbledon tickets brings out all manner of campers from the pros who have every item under the sun to the complete amateur with virtually no equipment. This year I saw people turn up with just a mat to lie on 😀 but whilst I recommend you travel light due to left luggage restrictions I would still bring the following:

How does the queuing system work? 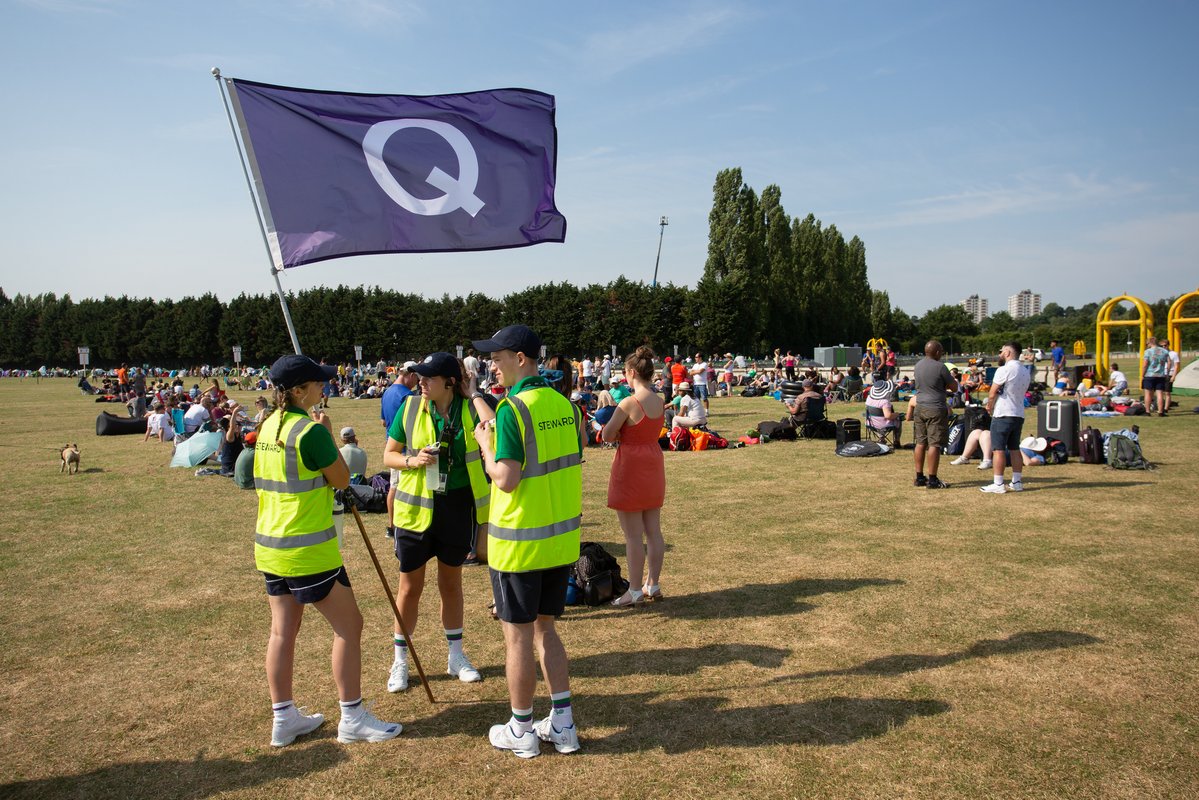 Upon your arrival at Wimbledon Park, you'll join the back of the queue (usually there'll be a flag marking it like the pic above) and be given a numbered queue card showing your position in the queue.

The queue card is effectively your ticket to the Championships and is numbered to show your position in the Queue. Keep good care of it as you'll need it to get your wristband and to get in to buy your actual ticket. Once you have the card, you will pitch your tent and are all set for spending the night in the park.

What happens on the morning of play? 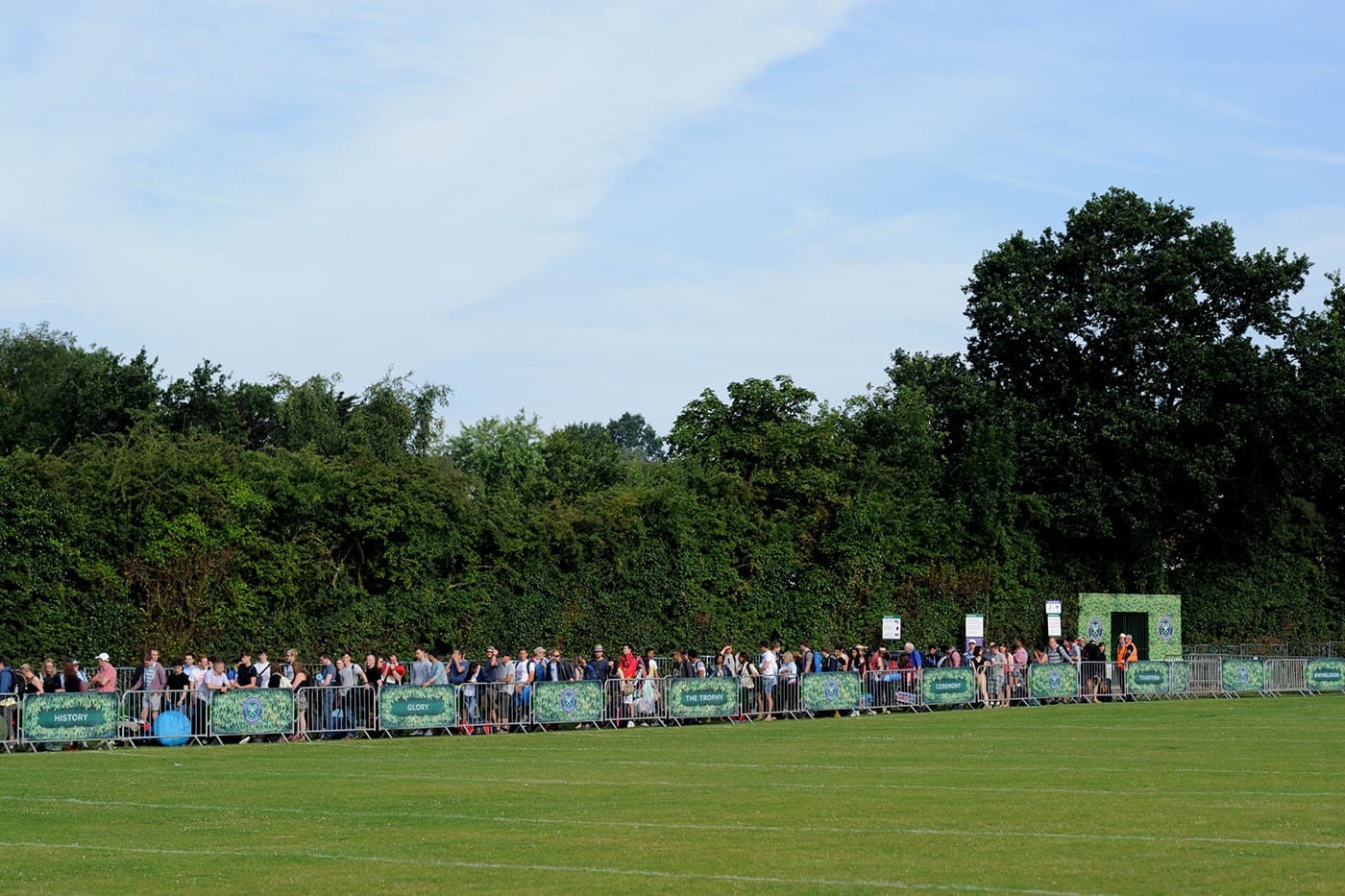 In the morning you'll be woken up around 6.00 am by the Honorary Stewards. You will be instructed to take down your tent, pack away all other camping equipment and store it away in left luggage.

Once everyone is packed up you'll move into a queue (in order of queue cards) where you'll be stood around for an hour or more before slowly working your way closer to the venue via the golf course. At around 7.30 am/8.00 am the stewards will work their way down the queue and issue wristbands for Centre Court, No.1 and No.2 Courts. Like I mentioned above there are usually 500 tickets/wristbands for Centre Court and so on. So if your queue card is between 1 and 500, you're in luck if Centre Court was what you were after.

After the wristbands are handed out, you will continue the walk to the gates where at around 10.30 am you will be allowed in to buy your tickets ready for the play which starts at 11.30 am.

What do I do with my tent and other luggage items? 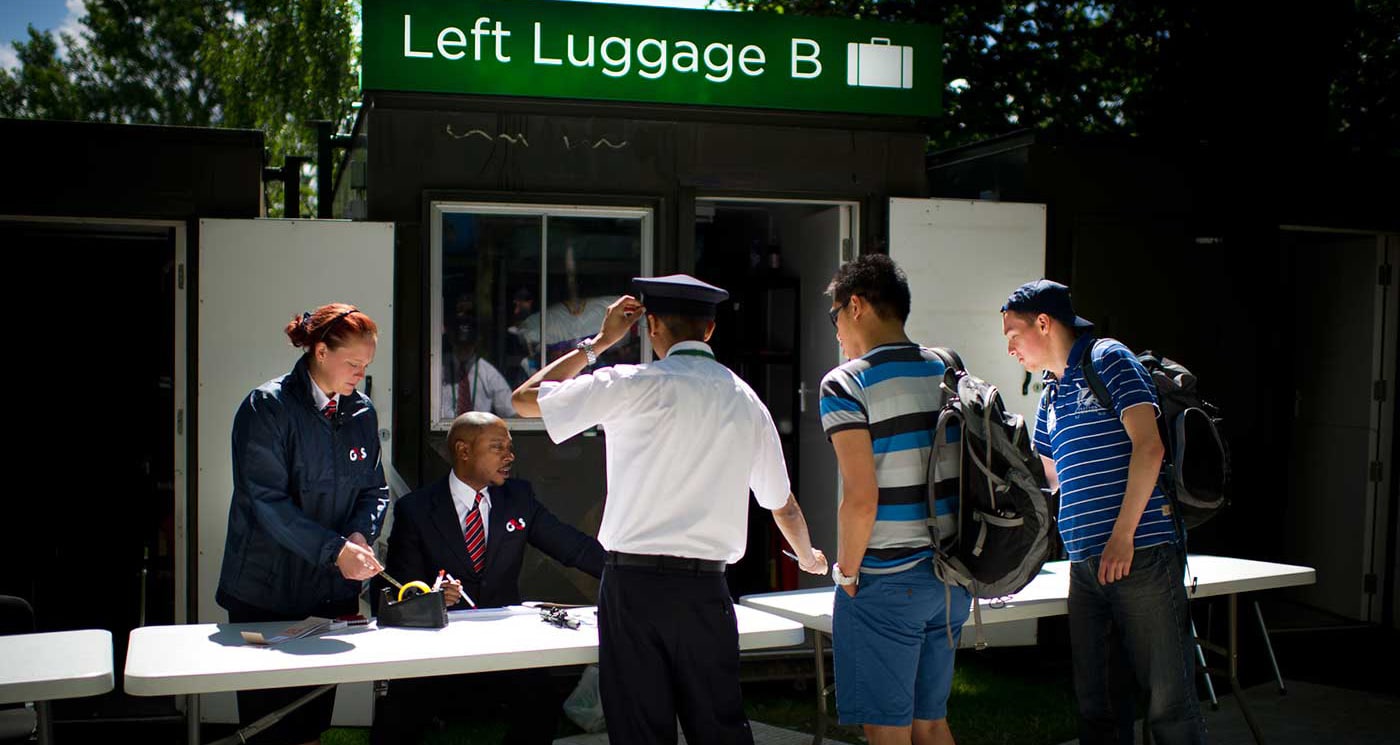 When you pack up on the morning of play you can leave all your gear in the Left Luggage facilities. They open at 5.30 am and close 1 hour after play has ended. For tents and camping gear it costs £5 and other items cost £1.

They say that ‘Proceeds are donated towards improving facilities in Wimbledon Park' which to me must be false as the facilities have not improved since I first camped in 2010, they're the exact same if not worse. The only thing I would say has improved is the organisation and queueing protocol, but that's been achieved by trial and error over the years, not by investment.

One thing you should be aware of is that the maximum size for bags in Left Luggage is 60cm x 45 cm x 25cm in size which is about the size of a piece of hand luggage/ carry on bag for an airline.

I'm queuing for more than one night, how does this work?

Whenever there's a popular player involved i.e. Federer then a lot of fans choose to camp for more than one night in a bid to guarantee they'll land Centre Court tickets. So if Federer is playing Thursday and you decide to camp out on Tuesday and Wednesday then the process works as follows:

You will arrive Tuesday and join the back of the queue for Wednesday's play, receiving a queue card for Wednesday. When the Stewards instruct you to pack away your items on Wednesday morning, you will be moved to the side whilst everyone else packs their items away.

Once everyone who is entering the grounds for Wednesday's play has packed away you will be moved to form Thursday's queue in queue card order. So if you received queue card No. 1458 when you arrived on Tuesday and the 1457 people before you were all queuing for Wednesday, then you'll be receiving the No. 1 queue card for Thursday's play.

I want tickets for Centre Court when should I arrive? 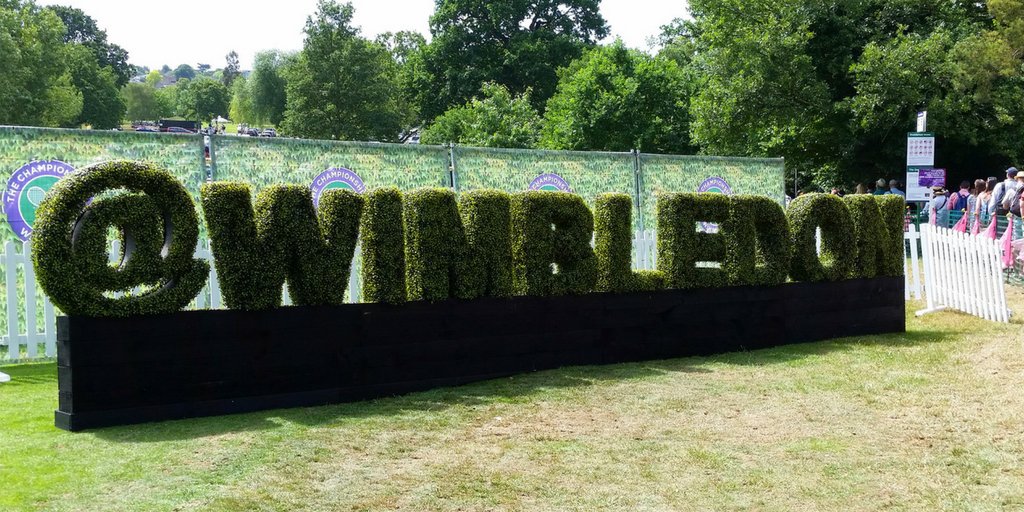 Demand varies massively on both a yearly and daily basis. It really depends on the scheduling and the players left in the tournament. Sometimes you'll need to be there 24 hours before play starts on your chosen day, other times you can get away with arriving in the evening before play. Your best bet is to check the Twitter profiles that provide ongoing updates which I've linked below:

How can I pay for the tickets? 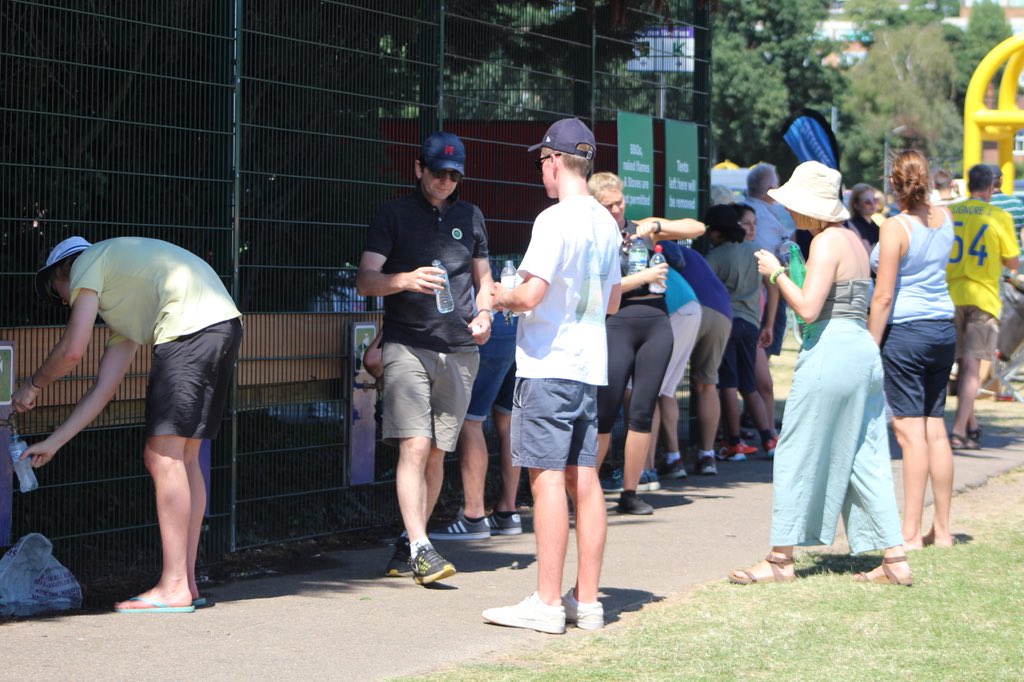 Piss poor is the answer. I first camped in 2010 and there have been zero improvements in 8 years. There are a small number of toilets and sinks for a quick ‘wash' and brushing your teeth. The council do try to keep them clean but when you have a few thousand people descending on a handful of toilets per day the result is as you'd expect.

There are no shower facilities on site, but there is a gym that people use about 10 minutes walk away on Church Road. It requires the purchase of a gym day pass so it will probably be the most expensive shower you ever take, but depending on how long you've been camping or what you've been up to in your tent it might also be the best.

You'll also need to keep hydrated and luckily there's a water bottle refill point near the front of the queue. It really should be monitored though with stewards informing people it's a potable water supply only used for refilling water bottles as I saw some sket washing her hair under one of the taps this year.

How long can I leave my tent for?

The queue rules state you should only leave your rent for 30 minutes at a time. When I first camped in 2010 there were quite a few people who rocked up, pitched their tent and left it for hours on end. Since then the Stewards have started doing random queue card checks to weed out the piss takers which I think is a good idea.

This year we had 3 or 4 queue card checks where the Stewards go around each tent making a note if nobody is present. I believe a couple of peoplewere ejected after missing multiple checks and nobody in nearby tents had seen or spoken to them. Fine by me 🙂

As mentioned 30 minutes is the recommended time limit, but if you've been at your tent for 8 straight hours and decide to disappear for 90 minutes to get some food in Southfields then I don' t think it's too big a deal especially if the tents next to you will vouch for you. Obviously do so at your risk and don't think you can be away from your tent for 2,3,4+ hours at a time without it being flagged.

What are the food options for the queue? 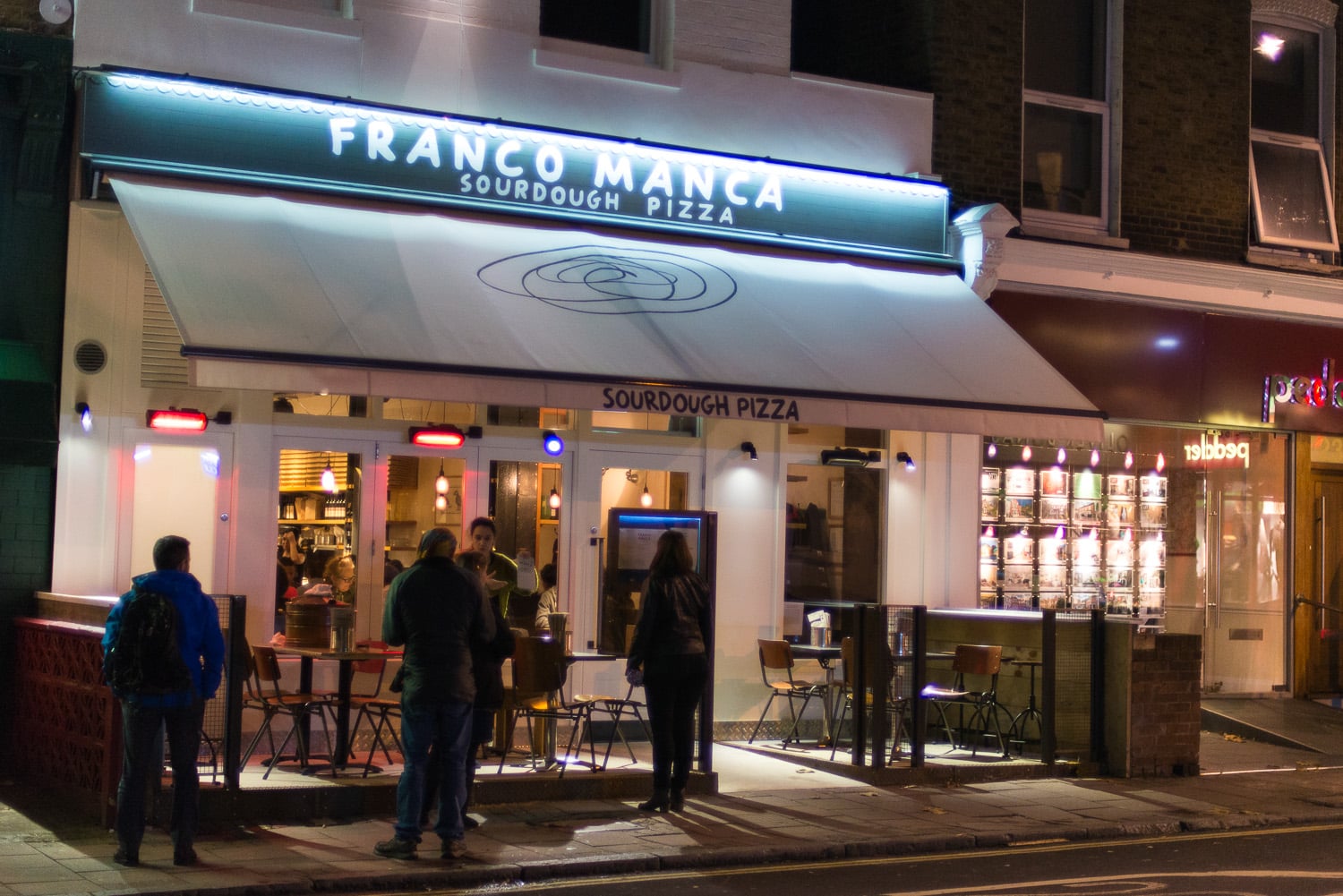 You have four options for food:

This year the fourth option on the list was my choice. There are a couple of restaurants in Southfields that do takeaway Pizza options. You can ring through your order and then go collect it when they say it will be ready. It was about 20 minutes wait and the restaurant is about a 10-minute walk just by the Underground station.

That would be my recommendation as I personally thought the on-site options looked like dog food. Cheap burgers, frozen pizza etc. that kind of stuff. There is also a Sainsbury's and Tesco Express in Southfields with plenty of snack options. Using one of the local takeaways that leaflet drop would be my second choice and I saw plenty of people tucking into a Chinese Takeaway which looked pretty good.

I think I've covered just about everything you'd need to know about queuing above but if you have any questions or have a suggestion for any information I might have missed then please leave a comment below. 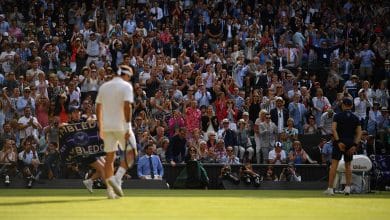 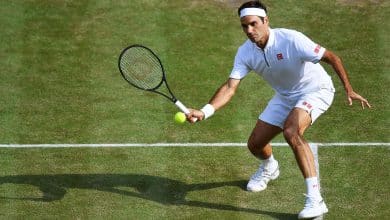 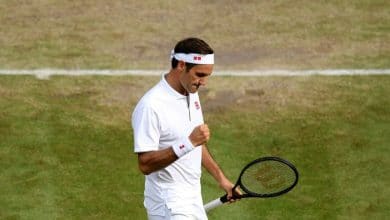 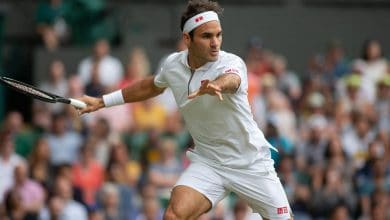 Federer Gives Berrettini a Beatdown in Wimbledon Fourth Round